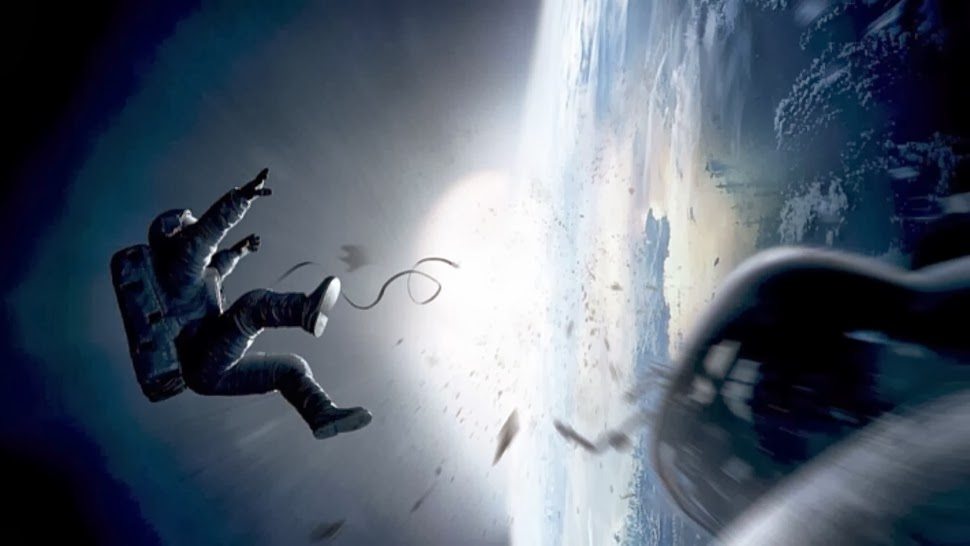 You don’t watch Gravity, you experience it. I won’t be exaggerating tiniest bit, if I say, for a majority portion of the film, I didn’t feel as if I was sitting on a seat in front of an IMAX screen among hundreds of people, instead I found myself completely transported into out-worldly world that Gravity creates. Breathtaking, visceral, visually awe-inspiring (more than anything you have seen on screen till date) and a technological marvel in every aspect, Gravity should find its place among seven wonders of cinema – if there are any. Gravity is not as much about story-telling as it is about entrancing you with its visual poetry and gripping you with possibilities of life and death in space. The film begins in a long, smooth, uncut take in a surreally placid way, but you soon realize that it was the calm before the impending storm. In one shattering calamity after the other, film rarely gives you space and time to breathe a sigh of relief, and even if does, you are grabbed by another even more precariously poised situation the next moment. It’s tense and it’s relentless, but even within all the chaos, the visuals and the images would never fail to induce gasps and a sense of wonderment.

Film also metaphorically delves into the theme of re-birth. One scene in particular clearly alludes to the process of birth when Ryan (Sandra Bullock) is shown sleeping in a fetal position. [SPOILER ALERT] Then, even the climax, when Ryan emerges from water can be related to the way a life is given birth to.

Technology in cinema is more exploitive than constructive, and we only have to look at the countless junk [not all but most] that is served in the name of action and superhero films to understand how technology has actually made detrimental effect to cinema where the shortest way to earn money is to use technology and serve guilty pleasures to audiences. While some may argue, Gravity too is a guilty pleasure, which may not be completely wrong but Gravity is so much more than just that. For starters, it provides the vicarious experience of what it’s like to be in space. As camera glides through one scene to another in a revolving fashion without any frame of reference, it actually transfers the experience upon audiences giving them a taste of what it is like to float in space. Not since, 2001: Space Odyssey has a film so convincingly depicted the challenge of living and surviving in space, and neither has any film since then conveyed the surreal beauty and aesthetics of space in the manner in which Gravity does. And, just like 2001: Space Odyssey, it will be landmark film, especially for those film-makers who want to tell stories that might have been till now in a dormant state due the technological challenge involved in achieving it. From that perspective, Gravity defies, and even dwarfs the challenge of making such films.

There was no doubt in anyone’s mind after he directed Children of Men, that Alfonso Cuarón is a visionary, but after Gravity he will also be regarded as a master technician capable of achieving even the impossible in cinema. Gravity, took him more than 4 years to make, and when you see the film, you understand how much of perfection has went behind it. He with his technicians deserve all the kudos in this world for creating such a work of art. And biggest share of credit in creating this make believe world or rather space should go to Emonuelle Lubezki who’s camera work is immaculate to say the least. His movement of camera is so extremely fluidic, at times floating like a feather, that no previous screen depiction of weightlessness [including Inception] has even come close. His cinematography is just trance-inducing.

Crashes don’t make noise in space. And therefore, you won’t hear any booms or bams during crashes, but you will hear the right sound at the right places. In one particular scene, you will notice that you only start hearing the sound when oxygen starts flowing inside the spaceship. That’s the level of perfection that went behind Gravity. So, Sound Effects team, take a bow. And I shouldn’t end this round of eulogy without the mention of Sandra Bullock who carries the whole film on her shoulders as the solo protagonist for majority of the film. She is restrain-fully good. In all probability, she should get nominated for Oscars and so will the film and direction. But in all certainty, film will sweep through all technical awards including Best cinematography, Visual Effects and Sound Effects.

Alfonso Cuarón is very clear from the outset that he’s not as interested in telling a pathbreaking story as he is in exploring the vast realm of precarious possibilities or adversities that can occur in space. Hence, there are moments in the film that might feel filmy or Hollywood-ish but that’s something which feels tiny to the enormity of purpose that Gravity is seeking to achieve. And hence, even pardonable. Though, I felt the background score by Steven Price, even though quite brilliant in its own right, a little too loud at times. But then again, these are just minor quibbles that don’t take anything away from the stupendous brilliancy of the film. Truth is, Gravity is something that you have never seen before, and possibly will not see in near future. Miss it [seeing it on big screen] at your own peril since later you are only going to ruefully regret it.