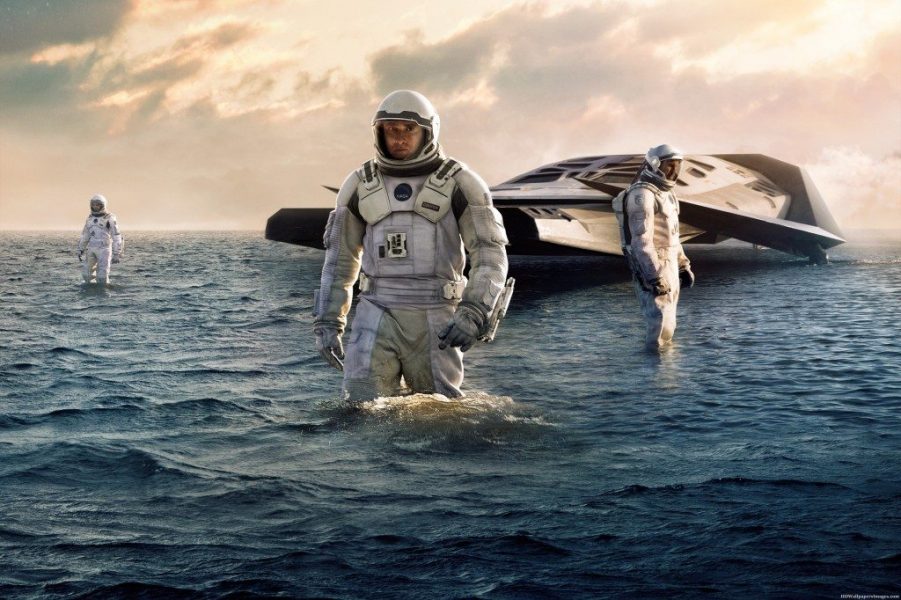 Christopher Nolan has long been declared a genius — which, very well he is. Though, what separates him other genius directors is that he is more interested in the art of movie-making than story-telling. He tirelessly tries to bring his ambitious and far-reaching visions to screen, and mostly succeeds. With every film, he and his ideas have kept stretching the limits of what’s achievable in cinema, for which Nolan deserves every ounce of credit. But on the flip side, we must remember that this is the same Nolan who made a terrific — possibly, even his best — film called Memento without any grandiosity or razzle-dazzle purely on the strength of clever stroy-telling. So, even though his recent films are visual wonders or intricately complex or both, it lacks the intimate touch that his earliest films had. With ‘Interstellar’, his effort is to combine the best of both worlds; and that’s why ‘Interstellar’ is simultaneously an extraordinarily ambitious tale of space and time voyage, and a humanistic tale of father trying to re-unite with his daughter.

‘Interstellar’ is set in near future when Earth is facing severe environmental issues resulting in huge dust-storms and crop-shortage. Humanity, itself, isn’t expected to last long either with the worsening situation of earth. Cooper (Matthew McConaughey), a former pilot and engineer, lives on a corn-farm with his daughter Murph, son Tom, and father-in-law. Piqued by strange gravitational events happening at his house, Cooper ventures on to find its cause only to stumble on the hidden base of NASA, where he encounters a team of scientists preparing to launch for an interstellar travel in search of another planet where life can be sustained. With the team in dire need of a trained pilot, they coax Cooper to board the mission, which he does. Cooper’s 11 year old daughter doesn’t want him to go, but he still leaves for the mission promising that he will come back. What happens next is a series of space adventures, where Cooper’s team (comprising scientists Amelia (Anne Hathaway), Romilly, Doyle, and two robots – TARS and CASE) face incredibly challenging situations: some physical, some moral, but mostly emotional. Whether Cooper keeps his promise to daughter, or gets lost in the maze of wormholes and blackholes is what you will have to go and see.

Not as clinical as ‘Gravity’ or as gloriously ambiguous as ‘2001: A Space Odyssey’, Interstellar is at least as ambitious as both of them, if not more so. In fact, had ‘Gravity’ not been made, ‘Interstellar’ would have produced an even greater sense of wonder than what it already does. Replete with some of the best images you would have ever seen on-screen, ‘Interstellar’ is visually breathtaking and technologically awe-inspiring. Not to mention the original score by Hans Zimmer, which might be one of my favorite aspects of the film. Zimmer’s sweeping music, I should say, doubles the effect of visuals, and creates a sense of drama that’s so inherently required in several scenes, many of which are occurring in the stillness and silence of space.

‘Interstellar’ is dense with ideas like blackholes, warmholes, theory of relativity, 5th dimension and warping of space and time, but it is not as interested in an accurate portrayal of these ideas — which anyway is virtually impossible — as it is in using them as tools to carry forward an emotional story of father trying to re-unite with his daughter in the face of insurmountable odds . It doesn’t mean, though, there isn’t any food for thought for those who are looking for some. In one of the most incredibly imagined scenes (occurring in the last third of the film) recreating warped time and space, Christopher Nolan gets to show his genius, and the science-geeks get their share of fodder to chew upon. The other aspects of film like the space-traveling through a warmhole, or a planet where 1 hour is equivalent to 7 years on earth, or time-traveling through blockhole will invoke a huge sense of curiosity among those who are looking for something for the mind.  Though, in Nolan’s own words, he is targeting the heart this time.

In this tussle of heart and mind,  flaws of ‘Interstellar’ become apparent; since weaving a simple adventure story with heavy undercurrents of emotions around very complex ideas (most of which would be very difficult to comprehend for a normal moviegoer) does at times produce conflicting results. There were moments in the film where I felt Nolan shortchanges science in favor of emotions. With a film that relies so heavily on human emotions, but in actuality is neck deep in science, it becomes difficult to feel for the characters as much as we should. Though, it does help to have an actor like Matthew McConaughey who makes those emotions look believable.

I was dazzled, amazed and challenged by ‘Interstellar’. And even though, I wasn’t moved by it as much as the film intended me to, I have nothing but respect for Mr. Nolan for attempting such a wildly ambitious take on interstellar travel. It’s flawed; but it’s beautiful. And it is also what Nolan ultimately wants it to be : A token of love from a father to his daughter.