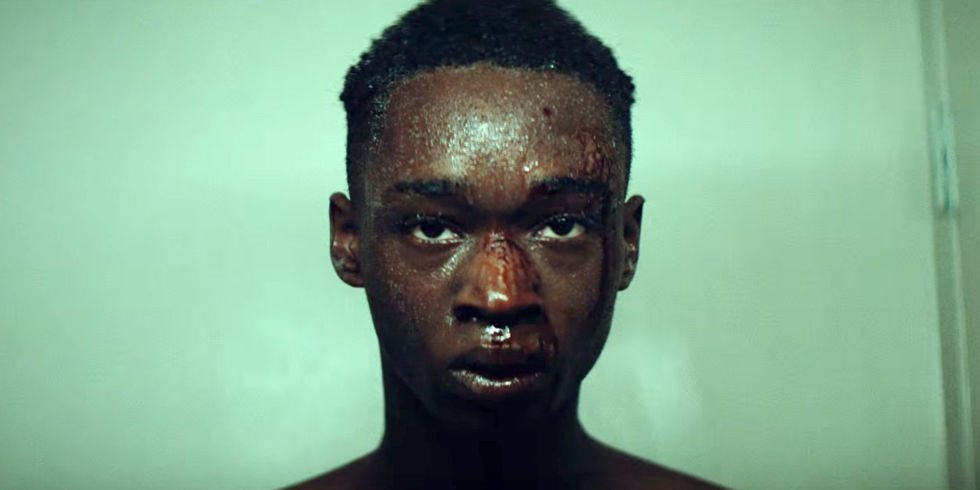 Focused entirely on one character, Moonlight is a wonderful, complex, demanding film, but does not entirely work for me for several reasons in the manner, say, Brokeback Mountain (2005) did and does, yet there is no denying the film is a stunning work of art. Perhaps because it did not go where I expected it go. Perhaps it is set in a world so different from mine. Dealing with African-American masculinity, the film has a quiet and confident power which I admired, and makes no apologies for its subject matter, which I think and hope we are far beyond by now. Divided into three chapters, “Little”, “Chiron” and “Black” we follow the same young man through to adulthood as he struggles to come to terms with who and what he is in today’s American society. For me they kept the characters at an arm’s length, which led to some distancing from them that I do not feel works, better them close to us so we know them, like them and understand them.

Alex Hibbert, Ashton Saunders, and Trevante Rhodes portray Chiron at the different times in his life, and each is excellent, though it is the haunting gaze of Hibbert I have not been able to forget.

Chiron, is a sad eyed person, with reason living the life he has lived, trying to discover his place in the world. Being raised by a crack addicted mother, played as horrific and pathetic by Naomie Harris in a great, seething performance, he is a pariah in his own world. He is like many young black men in America, looking for a father figure, a family, love, a life all at the same time struggling with his sexuality.  The character speaks of crying so much in his life he could all but turn to liquid and become part of the ocean, and we see why. Black, poor, living in dysfunction and gay he has so much working against him it seems as though he might never get ahead, or lead a good life, or most important, find himself. But there is strength within him he does not even know he has and he calls on that strength throughout his life when he needs to most.

Using three different actors could be problematic, but rather than calling attention to the casting, the director, Jenkins instead users the casting as though it were a natural progression of growth. What is remarkable is that each of that actors capture that hurt and wounded look in their eyes, in that they are consistent.

Director-writer Barry Jenkins has made a very special film that elevates cinema as an art form. Unlike anything we have seen this year it might be that rarity…an original.