Review: ‘Toni Erdmann’ is as Moving as it is Absurdly Funny 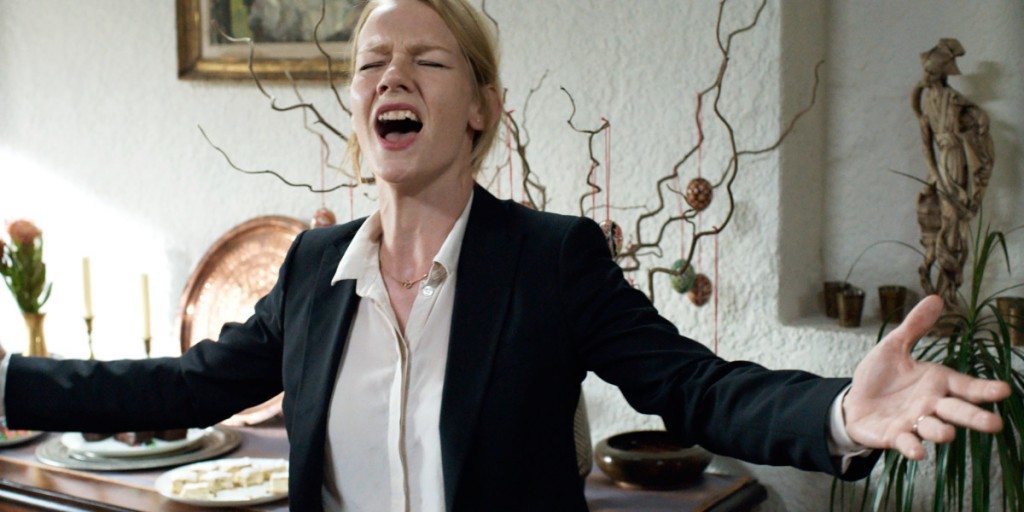 About five minutes into Maren Ade’s textured, magnetic film, one of the protagonists, Ines Conradi, a highly prodigious corporate consultant, snaps at her father after he ardently expresses his concern for her troubling indifference of her own well-being, remarking, “Even if I wanted to jump out of the window, you and your cheese grater won’t be able to stop me.” The cheese grater, here, refers to the gift the father has brought her for her birthday; a gift she so wryly pretends to love. Her sudden vexation at her father’s very valid unease hints with such vivid sharpness at the honesty with which Ade compels us to confront our own pitiable reality that it is nothing short of a poetic, drily humorous and agonizing reflection of modern follies. This small, relatively quiet moment in a film that includes, among much else, a deliberate, howl-inducing naked birthday party and yet, manages to encapsulate the tonal imperturbability of the film.

This particular moment also, does not play out five minutes into film. My delusion was shattered when I revisited the film to pin down Ines’s exact words to quote to the readers and had to skip to the 45-minute mark to find the scene. In my breathtaking investment with Ade’s miraculous characters and their bewilderingly human incapacities, I had not felt the passing of time and the nearly 3-hour long epic had felt fleetingly short.

‘Toni Erdmann’ tells the story of two misfits, both in their respective orbits and in each other’s company. When Winfried Conradi decides to stumble upon the life of his smart, composed, and in the words of her naively reverential assistant, “stiff”, offspring, he manages to detect an eroding of all vibrancy in her, and tries to bring some semblance of vitality to her life by pulling pranks and putting on disguises, the funniest and most poignant one being the titular Toni Erdmann, life coach/German ambassador.

Ade’s tender cosseting of this affable, imperfect-in-every-way-possible duo expertly, seamlessly transfuses authentic humanity with eccentric, side-splitting humour with such witty fluidity that you either find yourself wiping off tears impelled by excessive laughter at the absurdity of the situations she presents with such auteurist sharpness or discerning a goofy grin forming on your face as your eyes simultaneously well up marvelling at the insanely relatable fallibility of the protagonists. And yet, ‘Erdmann’ is not an inherently big film, despite the running time, and speaks almost in whispers with every little bodily gesture, every darting look to the side or serenely staring and comprehending the weight of lost time, of life passing by, conversing in volumes with the audience.

Ade conveys with such perceptive intellect the delusion that shrouds all our social and familial interaction. Ines hides her wariness of exhibiting affection with an oddly recognisable awkwardness, always failing to recognise her own desire for companionship and longing isolation. Winfried hopes to bury his volatile sensitivity with clowning and frequent demonstrations of irony. She pulls off this herculean task exploiting the humongous talents of Sandra Hüller and Peter Simonischek, who enliven each sublime moment with gorgeous, magnified empathy.

In one my favourite moments from her masterpiece, Ade leads me to a party where Ines is compelled by her father to sing, for extending gratitude to their hosts because they are practically gatecrashing. He begins to play, of all songs, Whitney Houston’s “The Greatest Love of All” on the piano and contradicting all expectations, she begins to belt out the song aggressively and without moving the camera from her face during the entire duration of the song, Ade chronicles the human experience of an entire generation.