The Story of the Making of ‘Rocky’ 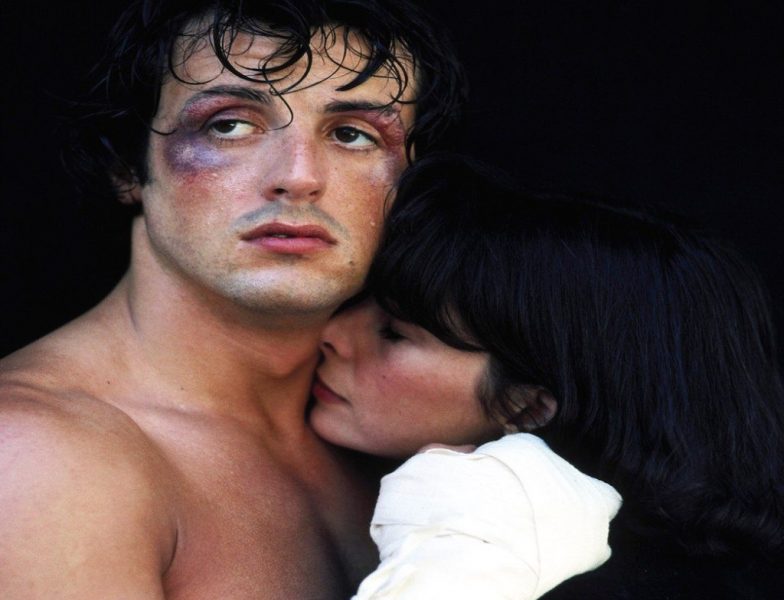 Those who have seen the new film ‘Creed’, based loosely on the Rocky saga are saying Sylvester Stallone could land in the Best Supporting Actor category for his performance as Rocky Balboa, the aging pugilist who coaches his former foes son. When the son of Apollo Creed comes to the ex-fighter asking for his help, Rocky reluctantly agrees, but in coaching the boy re-discovers his love of the sport, and the joy in giving something back to someone.

The last time Stallone was anywhere near the Oscar race was as a presenter. He has not been nominated since he scored nods for Best Actor, and Best Screenplay for Rocky (1976), which stunned the film-world winning Best Picture.

How I remember Rocky (1976) and the staggering impact it had on audiences, critics and the film world. In 1976, I had never heard of Stallone, nor for that matter had most of the film-world. He was a little known actor with a pregnant wife, bills and no work. In a weekend he wrote Rocky, inspired by the famous Rumble in the Jungle fight. He then began shopping it around to the studios hoping for a sale. And they wanted it.

They all offered on the screenplay, but wanted a different actor to play Rocky and Stallone believed only he could do the part. One studio wanted it for Ryan O’Neal, another for Warren Beatty, still another for James Caan, but Stallone held out. Even when the bidding hit $150,000 he held strong. Finally, United Artists offered Stallone a deal he could not refuse. He could play Rocky, John G. Avildsen would direct, they had a budget of one million dollars, and they had to shoot in 28 days. Shot on location in Philadelphia with a group of character actors, no stars, Academy Award nominees Burgess Meredith and Talia Shire the best known of the cast. Stallone choreographed the boxing sequences which were often more real than they needed to be.

Early screenings around Hollywood stunned the studio because preview audiences went out of their mind for the film. Then the critics loved it, calling it the finest Cinderella story in years, and the PR people created a campaign that paralleled Stallone’s story with that of Rocky.

Rocky Balboa was unlike any movie hero we had ever encountered. A deep voice, guttural almost, with a powerful physique not unlike early Brando, and hang-dog brown eyes that made him look sad, defeated by life. As we followed him through the film, watched him fall in love with Adrian (Shire) and fight heavyweight champion of the world in an exhibition match, going the full fifteen rounds, we realize the film was unlike most in Hollywood. He does not win the fight, but he does get the girl and proves in his own words that he was not just another bum from the neighborhood.

Rocky (1976) was the first film in which I clearly remember the audiences clapping for him, cheering what was happening on the screen and stomping their feet in support of his antics. They loved him!! They loved the film!!

Nominated for ten Academy Awards, including Best Film, Actor, Actress, Director, two for Supporting Actor, and Screenplay it would upset better films and win Best Picture. Overnight Stallone was a household name. Thinking him to be a great actor, new films were planned at once including, God forbid, a remake of A Streetcar Named Desire with Stallone as Stanley and Faye Dunaway as Blanche. It was not made. Hollywood was convinced Stallone was the next Brando, the next Nicholson, the next De Niro, no one had any idea of his limitations.

Within two years they did.

Three years later, two box office flops behind him after Rocky (1976) he made Rocky II (1979) this time directing the film, and this time Rocky wins. Through the course of his uneven career, Stallone has made some good films, and some dreadful films, gave a few good performances, and some terrible performances. He is not, clearly anywhere near being in the class of Brando…not even close. What he does, he does well, no one plays Rocky better than he, nor John Rambo, his scarred Viet Nam super veteran. And though enormously popular, the Rambo films trivialized the war in Viet Nam and the men and women who fought it.

Stallone made some solid cop films, Nighthawks (1982), directed a dreadful sequel to Saturday Night Fever (1977), recreating John Travolta in his own image called Stayin’ Alive (1983), a comedy with Dolly Parton, and then returned to Rocky for a third, fourth, and fifth. Every so often he would come close to something special, Cop Land (1996) being one, Rocky Balboa (2006), surprisingly good another, but never has he come close agan to the Oscar circle.

But let’s be clear, he was never, ever a great actor and the comparisons to the best in movies were just silly, caught up in the moment, nothing more. He was a strong physical actor, his performance in First Blood (1982) very good, until he had to speak and then the film fell apart. However as Rocky Balboa he gave us a true original that no one else could do because no one else got the chance. Stallone in may ways WAS Rocky and he made the best of the role for years returning to it when things got tough, when his career seemed in jeopardy.

Rocky (1976) remains a minor classic, Rocky II (1979) a virtual remake of the first, shockingly good, the one with Mr. T., Rocky IV (1985) just stupid, I mean why would the Russian fans cheer for him, Rocky V (1990) not half bad, and the latest Rocky Balboa (2006) a lovely final film, or so we had thought. Stallone did not write ‘Creed’ nor come up with the concept, they approached him to play the part and he agreed.

It might have been the second best career move of his life.

As Rocky in ‘Creed’ he might, he might be the films Mickey, the films heart and soul. Kind of cool if it all comes full circle for him and he is again in the Oscar race as Rocky.