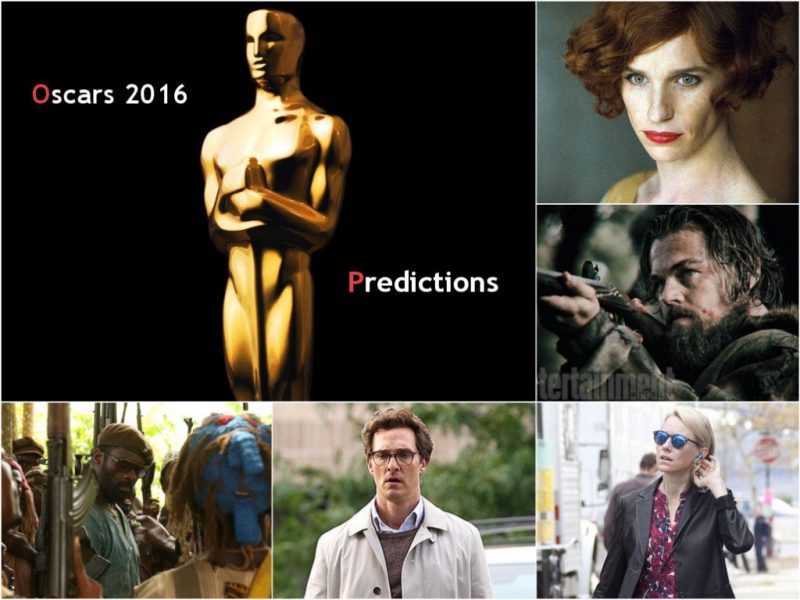 I know what y’all thinking. So soon ? After all, Oscars 2015 were held just a few days back.

Well, to be honest, predicting Oscars are more fun than the actual ceremony itself. So, yes, even though it is still very early, it is never too early to predict the Oscars. Firstly, because, as I said, it is a hell lot of fun guessing something so far ahead in time, and secondly, it will help you and me to keep track of the movies and performances to watch out for all year.So, treat this article as a bookmark, if you will, to help you through the year until Oscar season really begins.

I am going to predict the 8 major Oscar categories in this article and leave out the technical categories for business end of the year. Let’s get going then …

If you read the “Most Anticipated Movies of 2015” article on this site, you would have noticed the great quality of movies coming out this year. One has to remember, though, not all movies are “Oscar movies”. But still, in a year in which we are getting movies from Steven Spielberg, Quentin Tarantino, Richard Linklater, Alejandro G. Innarritu, Gus Van Sant, Danny Boyle, rest be assured there won’t be dearth of movies competing for the Best Picture prize. There are also some emerging talents like Cary Fukunaga (True Detective) and Scott Cooper (‘Crazy Heart’) that we keeping an eye upon.

With that said, let’s look at what Best Picture slate may look like next year.

1. The Revenant
The frontiersman, Hugh Glass, who in the 1820s set out on a path of vengeance against those who left him for dead after a bear mauling.

2. Bridge of Spies
An American lawyer is recruited by the CIA during the Cold War to help rescue a pilot detained in the Soviet Union.

4. Beasts of No Nation
A drama based on the experiences of Agu, a child soldier fighting in the civil war of an unnamed African country.

5. Black Mass
The true story of Whitey Bulger, the most infamous violent criminal in the history of South Boston, who became an FBI informant.

6. Carol
Set in 1950s New York, a department-store clerk who dreams of a better life falls for an older, married woman.

7. The Danish Girl
Inspired by the true story of artist Einar Wegener, one of first person to undergo sex-change operation.

8. Joy
Joy is the story of a family across four generations and the woman who rises to become founder and matriarch of a powerful family business dynasty.

Alternates:
Brooklyn; The Hateful Eight; By the Sea; Youth

PREDICTED WINNER: Alejandro G. Iñárritu, ‘The Revenant’ (Yeah. As inconceivable as it may sound, I have no other option but to pick Inarritu. It will be interesting to see how the Academy is going to react if ‘The Revenant’ actually turns out to be a better movie than ‘Birdman’.)

PREDICTED WINNER: Leonardo Di Caprio, ‘The Revenant’ ( Will this be the year ? Will Leonardo Di Caprio finally walk up the podium. Tough to say. But with talents involved behind ‘The Revenant’, this could very well be his year. Though don’t count Eddie Redmayne out. He can surprise and win two back-to-back Oscars ala Tom Hanks.)

PREDICTED WINNER: Jennifer Lawrence, ‘Joy’(Yup, J Law is in her golden phase right now, and I won’t be surprised if the Academy decides to award her again. )

PREDICTED WINNER: Idris Elba, ‘Beasts of No Nation’ (The Academy loves to award villains in this category and therefore, this is expected to head-to-head fight between Idris Elba and Tom Hardy — both playing vicious villains in their respective films)

PREDICTED WINNER: Rooney Mara, ‘Carol’ (She has been nominated once and continues to do good work. In Carol, she is more of a co-lead than supporting, but we all know in which category Weinsteins are going to campaign her for. And usually, co-leads fare exceptionally well in the supporting categories.)

PREDICTED WINNER: Aaron Sorkin, ‘Steve Jobs’ (Aaron Sorkin is a writing stalwart, and with such a high profile project he might be able to repeat the success of ‘The Social Network’ again.

PREDICTED WINNER: Alejandro G. Iñárritu & Mark L. Smith, ‘The Revenant’ (Even if ‘The Revenant’ doesn’t win Best Picture, it will remain a strong contender for Best Adapted Screenplay. Academy, usually, likes to reward films in this category that are not only good, but feels ‘adapted’. And ‘The Revenant’ with its epic story has all the right ingredients to be adapted into a great movie).