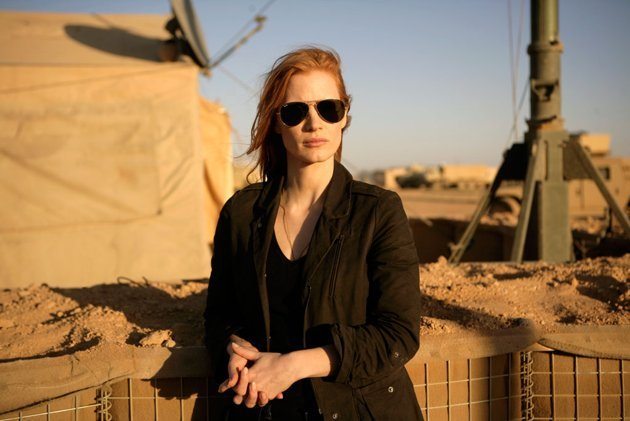 Films are a glorified medium to present fiction — which may or may not be based on facts. Rarely comes along a film that effortlessly traverses between fact and fiction with an uncharacteristic elan. Zero Dark Thirty is one of them; clinical and procedural in its approach and yet as much riveting, evocative and fulfilling, it’s the pinnacle of cinematic achievement. Zero Dark Thirty, while it provides dramatic thrills in abundance, is also about a woman’s will and her strength of character in pursuing a target, which begins as her job, but ends up as the sole purpose of her life. Relentless and unflinching, Jessica Chastain embodies a woman named Maya who in spite of operating in a men-dominated world of secret agents — with some of them carrying egos — never gives up on her singular motive, even if it means saying “I’m the motherf**ker who found the place” on her boss’ face. Kathryn Bigelow, who also functions in a male-centric universe of cinema [especially Direction] might very well be the alter ego of Maya — brave, unwavering, intelligent and above all, spearheading a project [in fact two, if you also consider The Hurt Locker] which is about/involving men, with stupendous results.

Story of Zero Dark Thirty is no secret. It’s about the greatest manhunt ever carried in history of humankind. It starts with torture of one of the detainees, and ends in killing of Osama Bin Laden. What’s in between is the real treasure. Slow-burner in it’s narrative, the film peels the suspense one layer after another, while punctuating and pausing to catch breath and simultaneously surprising you with its abruptness. If first two hours of the movie is unadulterated methodologically built suspense, the last half hour is pure unbridled thrill. Shot with infra-red cameras at an immaculately designed set, every frame looks real, to the point that I can’t remember a scene in recent cinematic history filmed with such convincing believability. Though, climax may not leave you with any joyous feeling of victory but rather an agonizing guilt with the realization that war is a misery even with all its rewards; that also is the biggest achievement of the film.

Zero Dark Thirty is also about the journey of a woman who starts from peripheries of the hunt to ultimately becoming the face of it. Maya, is the embodiment of courage and determination, who in spite of facing threats to her life and bruises on her ego, never lets anything to come between her and the quest to hunt Osama Bin Laden. Also, it’s worth noticing that behind the downfall and ultimate end of the most dangerous man on  planet was the illustrious effort of a young woman.

It’s a matter of sheer amazement to watch a film that not only pays attention to the tiny little aspects of film-making but nails it to perfection – from ensuring the urdu songs being played in the background to the perfectly done interiors of Laden’s house. Cinematography, one of the difficult aspects of such films, is nothing short of extraordinary and so is production design. But technicalities apart, the merits of the film actually emanates from the solidly well-done journalistic style screenplay by Mark Boal. His second collaboration with Kathryn Bigelow actually tops their previous effort, Oscar winning The Hurt Locker. Last but not the least, Jessica Chastain, who is the centrifugal force in the film. In a career defining role as Maya, Chastain is exceedingly effective in making viewers feel the pains, frustrations and joys of Maya.

So, if you really want to litmus test your taste of real cinema and if you have the patience to sit through one, go and experience Zero Dark Thirty – the best of 2012.