’10 Cloverfield Lane’ was one of the most critically acclaimed psychological thrillers of 2016. Even cinema-goers who weren’t fans of the first film in the Cloverfield series, ‘Cloverfield’, became infatuated with the brilliance of the film. What were the reasons behind the phenomenal success of this film? How did this movie rise among tons of movies of the similar genre, i.e., psychological thrillers, to become a global phenomenon? In this article, I aim to explain the reasons behind the success of ’10 Cloverfield Lane’. I warn you however, that this article contains spoilers and I’d recommend that you watch the movie first before coming back and reading this article.

The movie is quite frankly, like an 115-minute anxiety attack. If you’d ever make the television series ‘Twilight Zone’ into a full length feature film, it’d be something along the lines of ’10 Cloverfield Lane’. A valuable characteristic a film must possess seems to be ‘unpredictability’, especially for movie releases in the last 5 years. The success of the films ‘Get Out’ and ‘The Invitation’ proves this fact. The current generation of cinema-goers like a film in which nothing is taken for granted, where no character is really what he or she seems to be, where there is no way to clearly predict the climax of the film.

The Plot and Ending 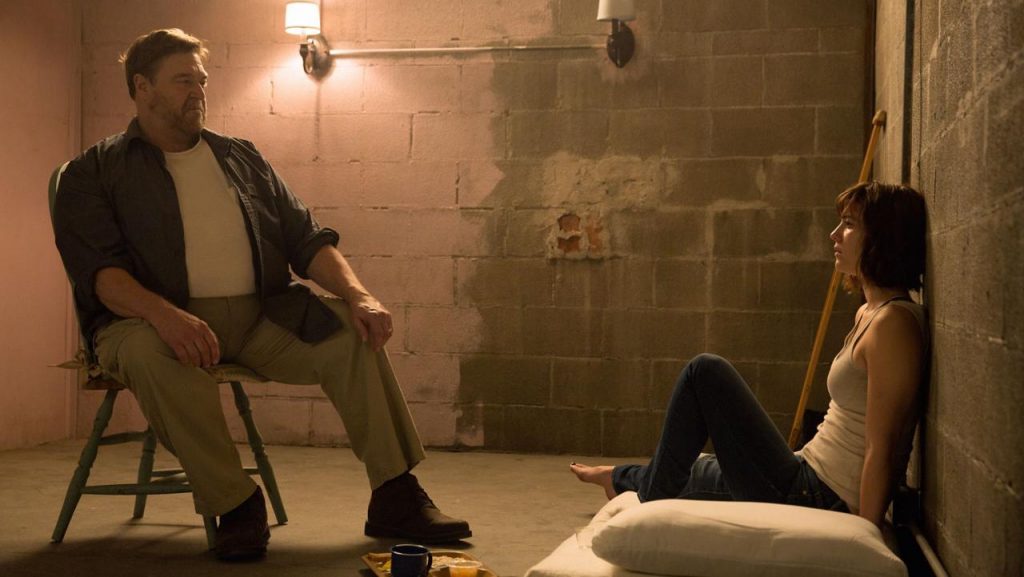 ’10 Cloverfield Lane’ checks all these boxes and then some more. When Michelle wakes up in the shelter at the beginning of the film, you begin to think that Howard and Emmett have abducted her and are feeding her a nonsensical story about a chemical attack. The creepy body language of Howard reinforces this thought and the movie takes a seemingly dark turn.

The claustrophobic sequences in the bunker are unnerving and keep you at the very edge of your seat. The movie has you rooting for Michelle right up until the moment she attempts to escape for the first time and is met by the deformed woman at the window. You then slowly start to consider the fact that Howard might actually be telling the truth and is just a creepy man with good intentions. The film then takes a bit of a survivalist turn, Michelle starts to believe that the chemical attack really took place and the tension in the air for a short period of time. The dialogue in this film is simply spectacular, Howard’s dialogues in particular keep revealing parts of his character to the audience.

‘Monsters come in many forms’. This brilliant quote which says everything about the film happens to be the movie’s tagline. When Michelle goes to fix the air filtration system and finds the words ‘HELP’ scratched on the window and the picture of the supposed ‘Megan’ the tension in the movie reaches a feverish level, reinforced by Emmett claiming that the girl in the picture wasn’t actually ‘Megan’ but a girl who went missing a while back. The audience at this moment is forced to suddenly switch support to Emmett and Megan, rooting for them to escape.

And then comes what is undoubtedly the most spontaneous scene in the film. After discovering the intentions of Michelle and Emmett, Howard confronts them in a scene filled with a deadly, chilling silence that ends with Howard shooting Emmett in the head. At that point, you just want Megan to get out of there alive and you don’t really care whether he’s telling the truth about what’s outside or not. 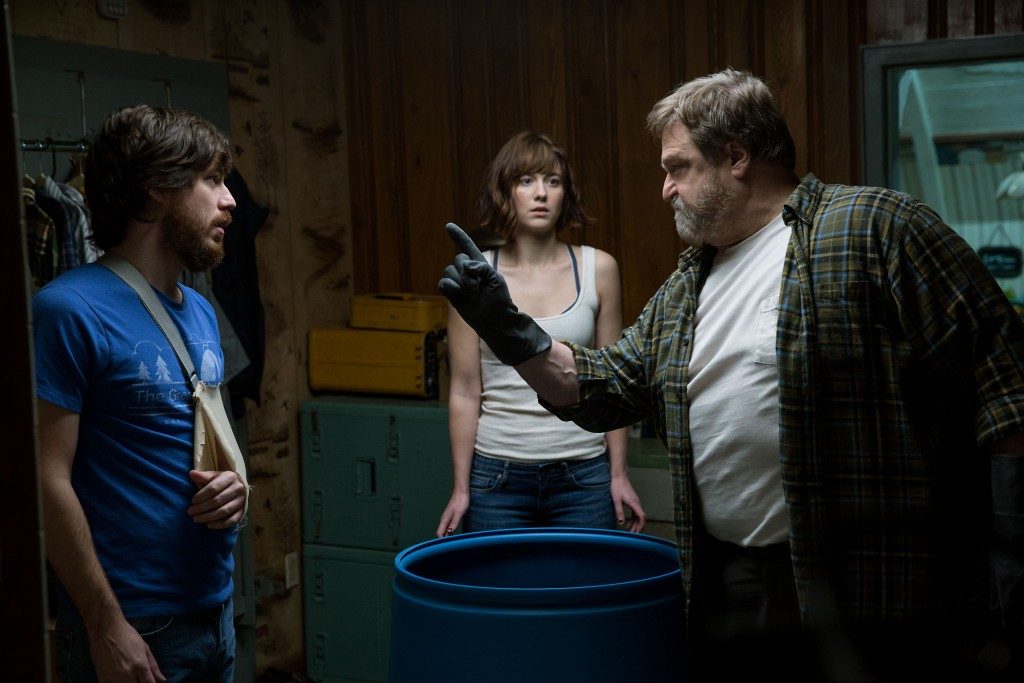 And then the climax. There were actually aliens exterminating people outside the bunker with chemicals. The twist is neither “Howard is just crazy” or “Howard was right the whole time. The twist is both. Monsters do come in many forms. Many people who watched ‘Cloverfield’ before watching this film claimed that it was actually spoiled for them. Since ‘Cloverfield’ was a pure monster film, they are inclined to believe Howard is telling the truth throughout the film, thereby reducing its unpredictability.

So does the story imply that Howard was already a serial killer/kidnapper who just happened to have an obsession with doomsday that really came true? So he was just a psychotic sociopath after all, who happened to be telling the truth. Who, perhaps, just got ‘lucky’ with the timing of the attack and tied the two together to present a reason for kidnapping Michelle. He probably did really have a daughter Megan who he lost and was trying to replace her by abducting young girls and holding them in his bunker. Let’s face it, here’s the irony of fallout bunkers: Should the unthinkable happen, in order to survive, you would have to spend the rest of the apocalypse locked up with the kind of person that owns a fallout bunker. 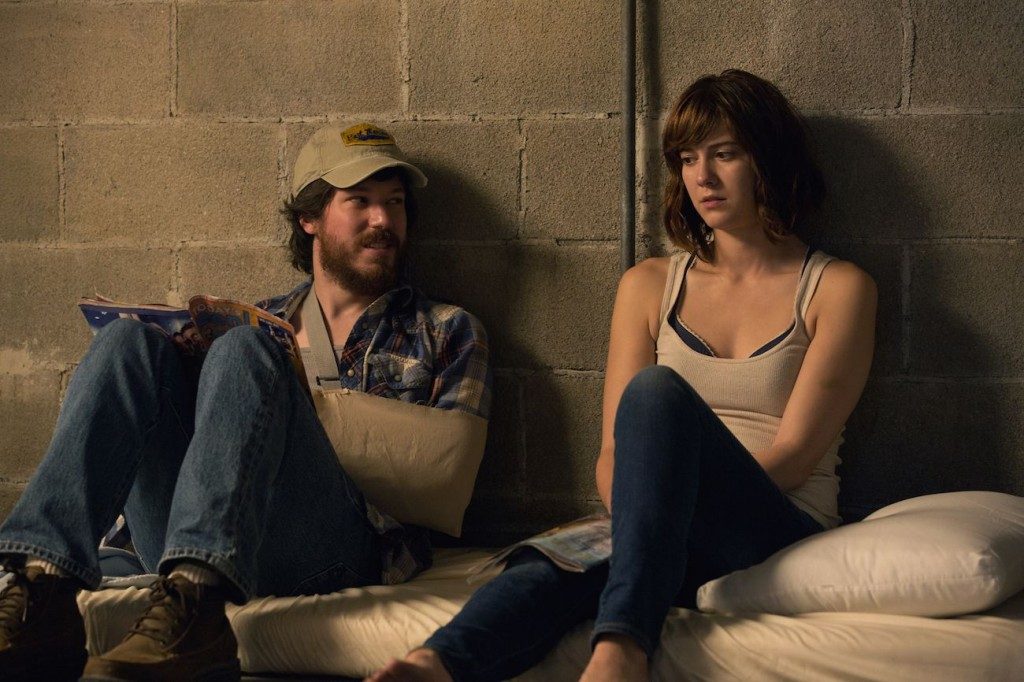 John Goodman puts in a career best performance as Howard. He manages to be creepy, trustworthy, funny, evil and friendly, all at the same time. I’d rate it among the best anti-hero performances in a film of all time. At times, the man has you believing that he is a deranged psychopath. Halfway along the film, you begin to empathise with him for being a man broken by the loss of his daughter. You then begin to alternate between these two contrasting opinions until the film’s climax. There is one specific scene which makes revelations about Howard’s character, one where he is unable to describe Michelle as a ‘Woman’ and calls her a ‘Girl’, a ‘Child’ and a ‘Little Princess’. He is explosive and clearly unstable, yet we are perpetually reminded of his control over Michelle and Emmett. There were multiple moments throughout the film in which Howard was asking the pair to appreciate him more or at least show some appreciation for keeping them alive and away from the air. This signifies his thirst for approval or his constant need to be appreciated.

Mary Elizabeth Winstead is splendid as the resourceful but clueless Michelle. Her use of tools and her crafty methods of getting out of tight corners is indicative of a character who could represent individuality and secularity. She has a drive to be independent throughout the film, as established in the opening scene in which she ignores the boyfriend (a 30-second voice cameo by Bradley Cooper) on the phone. Her facial expressions are priceless and she is definitely growing to be one of the best actresses in the industry.

Emmett, played by John Gallagher, Jr. is the least explained character in the movie. We have very little insight as to his background, just that he voluntarily entered the bunker after seeing the beginning of the attack. Emmett is a lovable character with an innocent look around him and it was devastating for the audiences when his death was made so sudden and abrupt. But hey, spontaneity is a must for good cinema these days.

The movie is primarily carried by how interactions take place between these three characters. An instance of a noteworthy exchange which sets the atmosphere for the film is when the three are playing charades and Howard describes Santa Claus as “I watch you when you sleep! I know what you’re doing!” This moment signifies how Howard’s sociopathic tendencies make even a seemingly innocent concept like Santa Claus seem sinister.

How does this film fit into the grand scheme of things in the ‘Cloverfield’ Series? 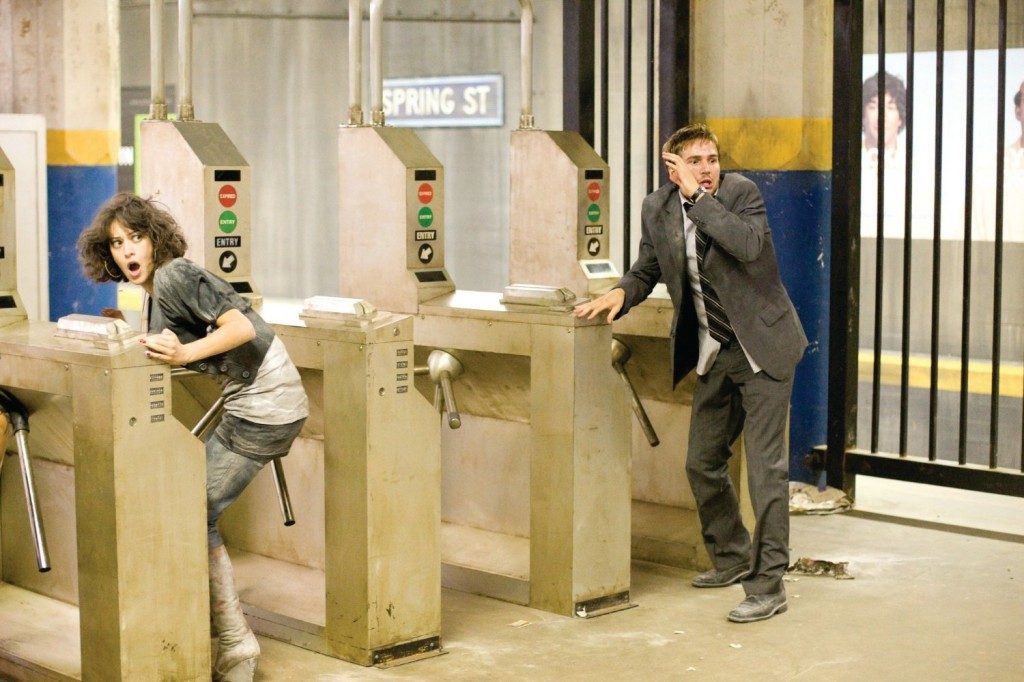 Producer J.J. Abrams has stressed that ’10 Cloverfield Lane’ is NOT  a sequel to ‘Cloverfield’, starring Lizzy Caplan (below), which is also pretty obvious from watching the film. The shaky camera movements, filmed in first person and sudden supernatural monster attacks are some features which are completely absent from ’10 Cloverfield Lane’. It’s not even certain whether the events of this film take place during the same time as the first film. The next movie based in the ‘Cloververse’ as fans have begun calling it is announced as ‘God Particle’, starring David Oyelowo and Gugu Mbatha-Raw releasing in October this year. Also, the movie will be completely set in space.

It seems as though Abrams and his team want to make movies completely distinguishable from each other even though they are set in the same universe, a formula which probably has not been attempted so far. More films are apparently in the works. If they are anywhere near the quality of ’10 Cloverfield Lane’, we do have a lot to look forward to.