Will There be a 2 Broke Girls Season 7 or is it Cancelled? 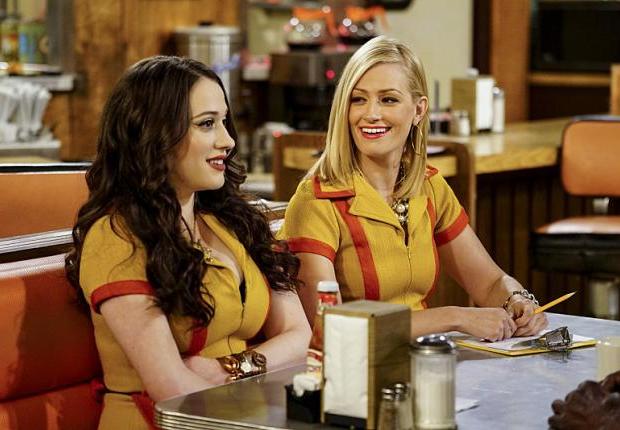 ‘2 Broke Girls’ is an American sitcom that premiered in 2011 on CBS. It revolves around two friends, who constantly struggle with maintaining their bank balance while working in a diner to raise enough funds to open a cupcake bakery. Created by Michael Patrick King and Whitney Cummings, the story is set in Williamsburg, Brooklyn, New York City.

After spanning for six seasons, the show came to an end in 2017. Some of you might be wondering, if there will be a 2 Broke Girls season 7. Here’s everything we know.

The cast of ‘2 Broke Girls’ is led by Kat Dennings as Maxine George Black aka Max and Beth Behrs as Caroline Wesbox Channing. While Kat is known for starring as Darcy Lewis in the Marvel superhero movie, ‘Thor’, Beth made her acting debut with ‘American Pie Presents: The Book of Love’.

Max, a beautiful girl with modest means and from poor family background, works as a waitress at the Williamsburg Diner. She is prone to deliver sharp one-liners and make jokes about her own promiscuity. Max starts selling homemade cupcakes at the diner, after which she teams up with Caroline and plans to open their own cupcake business.

Caroline is Max’s co-worker, roommate, and closest friend, who had graduated from the University of Pennsylvania Wharton. She actually comes from a well-to-do background but is forced into poverty when her father is arrested.  Caroline’s past makes her a bit high-maintenance at times but she still manages to get used to her life that involves waitressing at the local diner.

Garrett Morris stars as Earl Washington, a cashier at Williamsburg Diner, who is quite close to Max and is addicted to marijuana and gambling.. Jonathan Kite plays Vanko Oleg Golishevsky, a cook with Ukrainian origins, prone to cracking sexually inappropriate jokes. Later on, Vanko starts a relationship with Sophie. Matthew Moy plays Han Lee, Williamsburg Diner’s owner. A South Korean native, Lee is ignorant when it comes to American jokes and mannerisms. Rounding up the lead cast is Jennifer Coolidge as Sophie, a Polish woman residing in the same apartment complex as Max and Caroline. Sophie often engages in long conversations with the girls, regarding stories about her sexual encounters.

2 Broke Girls Plot: What is it about?

‘2 Broke Girls’ is about Max and Caroline, struggling to make ends meet while working toward realizing their dream of one day, opening a cupcake bakery. Joining them in this journey is their boss Han Lee, the perverted cook Oleg, an elderly cashier Earl, and part-time boss Sophie. Max starts off by simultaneously working as a nanny for Peach’s two twins.

Each episode winds up by showcasing the bank balance of the girls and how much they still need to make in order to reach the required milestone of $250,000 to start their dream business. Sophie does lend them a loan of $20000 at the beginning, which Caroline and Max use to open a cupcake shop. But the venture fails and they are forced to close it down. After settling Sophie’s loan, they return to square 1, with only $1 n their account.

The girls make a second attempt by opening a stall once again in the back room of the diner. Meanwhile, Max falls for Deke and Caroline starts a relationship with Nicholas. But their affairs do not last long. When this trial also fails, they start a cupcake T-shirt business. After an initial successful run, even this venture reaches a dead end.

Next, Caroline sells her biography to a film producer for $250,000 and uses most of the cash in their dream business. Meanwhile, Max falls for a second man named Randy, which also does not work out in the long run. In season 6, we witness Caroline’s story being finally made into a movie. But misfortune strikes once again when she ruins an expensive dress at the premiere. As a result, the girls again make a comeback to their original broke status. On a good note, Randy returns and Max resumes her relationship — this time, hoping that it will finally hold a more promising future.

2 Broke Girls Season 7 Release Date: When will it premiere?

‘2 Broke Girls’ season 6 premiered on CBS on October 10, 2016. After running for 22 episodes, it concluded on April 17, 2017. The series, since its premiere, has received mixed reactions from audiences and critics alike. Although the performances by the lead cast are good and the chemistry apt, its stereotypes and too much emphasis on sexualized jokes have led to a fair amount of negative reviews. However, it did manage to garner a respectable viewership during its runtime.

The sixth season finale of ‘2 Broke Girls’ concludes by opening some new doors for both Max and Caroline. Hence, viewers wanted to know how the story would continue from here. But surprisingly, on May 12, 2017, it was announced that CBS had canceled the series after six seasons. This bit of news came quite unexpectedly and the network did not come up with any official reasons.

Possible causes could be its declining ratings, CBS’ feud with Warner Bros and the launch of three new sitcoms on the platform. But star Kat Dennings was positive with returning to the series someday, as this is what she said: “Maybe one day we’ll wrap it all up with a two-hour special where we see all of these things happen. I would love that. I think the people that watched the show for so many years deserve some closure, and I would love to give that to them.”

However, as of yet there has been official announcement of ‘2 Broke Girls’ season 7 release date or for that matter a two hour special. As for now, the ranchy sitcom stands cancelled.

You can check out the official trailer for ‘2 Broke Girls’ season 6 below.