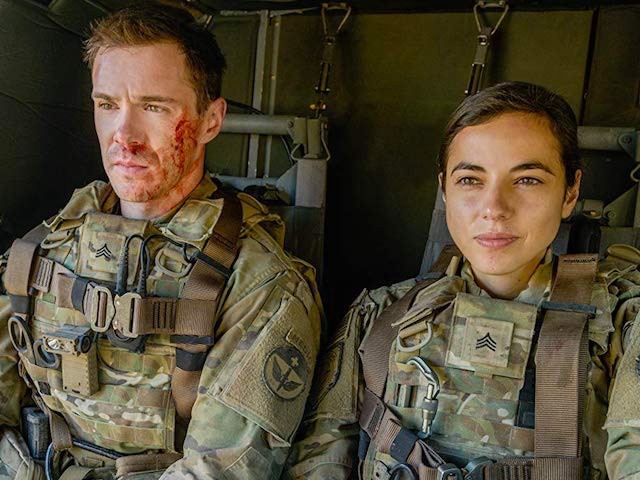 ‘68 Whiskey‘ adds a new perspective to military dramas. It is intended to put a comedic spin to things, as it follows the everyday activities of army medics who are posted in Afghanistan. Stationed on a base called ‘The Orphanage’, these diverse medics have to rely on each other and their greater sense of purpose to get them through the day.

With acerbic humor, reminiscent of shows like ‘Catch-22‘ and ‘M*A*S*H’, ’68 Whiskey’ is off to a laudable start. Based on the Israeli show, ‘Charlie Golf One’, ’68 Whiskey’ introduces a bevy of characters that we could see ourselves becoming fond of.

The show has just kicked off with its pilot episode. Naturally, you might be wanting to know about what goes down in the show. We are here to tell you just that, right after we walk you through when and where to stream the upcoming episode.

Titled ‘Finger Lickin’ Good’, the episode sees Roback, Davis, and Petrocelli making their way back to the base through a treacherous desert. When Roback makes a grand gesture to help out Alvarez, it only complicates things with Durkin. Holloway happens to take a special interest in one of her patients, in the meantime.

Cord cutters are on the rise, and luckily, there are a number of options that they can use. ’68 Whiskey’ is available on DirecTV, PhiloTv, Sling Tv, and Fubo TV. You can also head to Amazon Prime to buy and stream the episodes.

Episode 1, titled ‘Buckley’s Goat’, starts with a couple having sex. We are introduced to Durkin and Roback. The former seems to be obsessed with her presence on social media and drops a little too much information about her uterus. Meanwhile, Roback goes off to a fight after this quickie.

It turns out that he has a lot of money riding on the fight, and expects to make it to the third round. The fight is wrapped up in the second round with Roback pretty badly injured. By this time, we know that these characters are stationed at the NATO Coalition Base Guardian, Laghman Province, Afghanistan.

Nicknamed ‘The Orphanage’, the base is home to a host of colorful characters. We are introduced to some of them, as Roback and his squad flies off to rescue an injured soldier. In the process, they also meet an injured Afghan who can speak multiple languages. Roback decides to rescue both.

In the chopper, they lose the soldier, since Alvarez misses detecting a gunshot wound in his back. The Afghan is taken to the base, but Holloway, Roback’s superior, is not too pleased. She seems to have a problem with the fact that the American soldier died, but the Afghan will occupy one of the beds.

Alvarez, who had a thing for the dead soldier, Buckley, takes his death hard. She gets drunk and gets up on the roof talking about making America great again while asking for a travel agent. While this would mean consequences for her, it turns out she has been abruptly discharged because her father has been deported. There are some issues about her serving in the army and a promise of citizenship, but nothing is resolved.

Meanwhile, Roback plans on making up for the money he lost in the boxing match. He plans on raiding the supply hut. Durkin goes with the plan, as we learn more about her. She is an Instagram model for a weapons manufacturer. She plans on saving up the money to buy a house in Los Angeles, after her tour, and serve as her cousin’s stunt double.

Holloway has her own moment of truth when she has a dream about sex with the Afghan patient. Whether this materializes into something more concrete, will be explored in future episodes.

Finally, we come to the deal that Roback, Petrocelli, and Davis plan on making. The intention is to exchange medical supplies for hashish. However, the three do not seem to have thought the plan through. They end up being outgunned and outmanned, and about to receive the sour end of the deal. Roback’s quick thinking saves the day since he threatens to burn the medical supplies.

He actually pours iodine, and nothing flammable, but the Afghans don’t know that. Amidst all this chaos, Petrocelli manages to befriend a goat that is said to be possessed! When the group leaves with the hashish, there is a tense moment as they cannot remember where the ambulance is parked. Ultimately, they plan to hike back with hashish on their backs, when they discover that their ambulance is on fire.

Episode 1 has set the ball in motion, with multiple characters, each having their stories. It remains to be seen how the future episodes play out in ’68 Whiskey’.