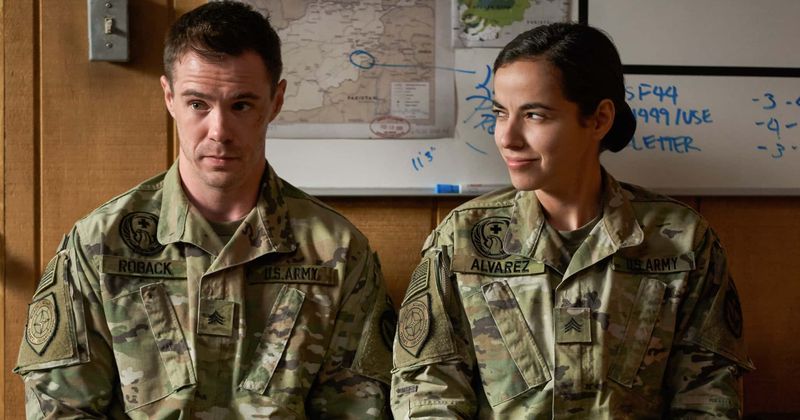 Not many shows can combine elements of a military drama with aspects of a medical comedy, as well as ‘68 Whiskey‘ does. Tipping its hat to shows like ‘M*A*S*H’, ’68 Whiskey’ is off to a good start.

We follow the exploits of the army medics, posted in Afghanistan, in a base nicknamed ‘The Orphanage’. The brand of humor that the show champions is already growing on viewers after the pilot episode. We have been introduced to a plethora of characters, who each have their quirks and personal problems.

We have met an individual who acts as an Instagram model for weapon manufacturers, as well as an individual, who is facing deportation, despite serving in the army. The pilot humorously walks us through a drug deal that almost goes askew and definitely leaves some key protagonists to make a long hike back to the base.

Since this is where the current episode picks up, you might be wondering about what happens in Episode 2. We are here to tell you that, right after walking you through when and where to watch the upcoming episode.

When is 68 Whiskey Episode 3 Release Date?

Titled “Daddy Issues”, the episode sees Roback, Alvarez, and Davis on a mission to find Qasem. Alvarez makes a new friend, while Roback opens up to Durkin, and tries to salvage the fight with Sasquatch.

Where to Stream 68 Whiskey Episode 3 Online?

Cord cutters are on the rise, and luckily, there are a number of options that they can use. ’68 Whiskey’ is available on DirecTV, PhiloTv, Sling Tv, and Fubo TV. You can also head to Amazon Prime to buy and stream the episodes.

Episode 1 sees Petrocelli befriending a goat, named Boz, while the drug deal is going on inside. The goat becomes a kind of substitute for Buckley, who they lose early on in the pilot. Petrocelli takes care of Boz, feeding the goat and treating it like a pet.

Obviously, Boz comes along when Petrocelli has to hike across the desert along with Davis and Roback. The goat has become a sort of a mascot, and clearly Petrocelli relies on it for some sort of emotional connection. The journey through the desert is not without its own adventures, as they discover that SecCorp is up to something.

When the situation gets a little tricky, Boz comes to the rescue. The goat bites off a finger of one of the SecCorps, which gives Davis, Petrocelli and Roback, a chance to escape. It seems that carnivorous goats can be added to the list of possible dangers in Afghanistan.

Back at ‘The Orphanage’, we see that Alvarez’s situation is the same because she still faces deportation for being a Mexican, despite serving in the US Army. It is hinted that the decision is an executive one, as her commanding officer tells her. Naturally, it refers to the current political scenario in the US, but it also gives Roback the opportunity to come up with a plan to help Alvarez out of her mess.

The show is carrying forth the storylines of the characters well while introducing new angles to the narrative, which are bound to play out in the upcoming episodes. It remains to be seen how the stories of the army medics on the base, ultimately turn out.