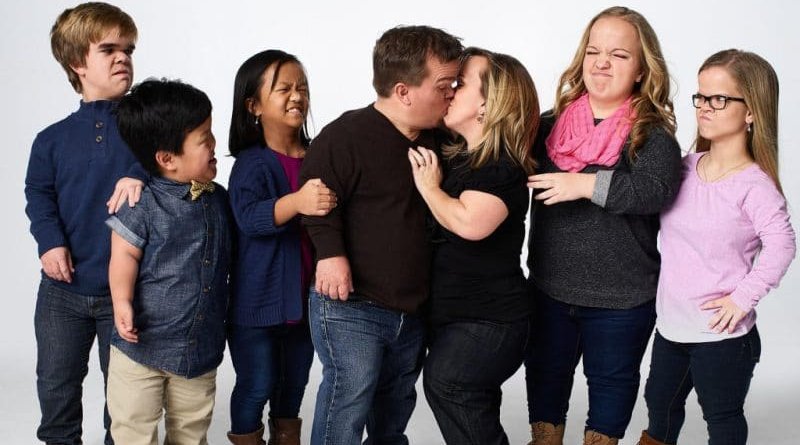 ‘7 Little Johnstons’ follows the Johnstons family who is living a happy life despite being little people. They are like any average American family who has their own dreams and needs like others. The first season of ‘7 Little Johnstons’ premiered on 31st March 2015 and it airs on TLC. It has since been one of the most popular shows on the network.

TLC network considers this family as the world’s largest known family of little people. From a disastrous attempt at a “birds and bees” discussion to high-drama soccer tryouts, to a family dealing with a huge renovation in their 1891 home, the Johnston family has been entertaining the audience for many years, and we simply can’t get enough of this adorable family.

The network is known for highlighting several different types of families, in an attempt to erase any trace of otherness that we might form in our minds based on external appearances and lifestyle choices. To this extent, they have shows on polyamorous families like ‘Sister Wives‘ and ‘Seeking Sister Wife‘. They also have an excellent show on a transgender girl called ‘I am Jazz‘. It is as fabulous as it is sensitive. ‘7 Little Johnstons’ is one among many TLC shows that focus on people who are short in stature. Some of these shows include ‘Our Little Family’ and ‘Little People, Big World‘. The aim of these shows is to remove the stigma around dwarfism and portray it as something completely normal by giving viewers a peek into the everyday lives of people who are affected by dwarfism.

7 Little Johnstons Cast: Who is in it?

All the members of this family are the lead cast of this reality documentary series. Here they are:

Anna Johnston: Born on 7th May 2000, Anna is the third kid in the Johnston family. She was adopted at the age of 4 from Siberia. She has four more siblings, and two of her siblings were also adopted by their parents Amber and Trent Johnston. Her other siblings Elizabeth and Jonah are biological kids of their parents. Today, she is healing from spinal fusion surgery.

Amber Johnston: Amber is a homemaker and mother to five kids. She loves all of her children equally. She wants to keep her family fit and healthy. She is 4 feet tall. She uses her positive attitude to teach her kids how to triumph over difficult challenges in life. She also serves as the head of the local Parent-Teacher Association and Girl Scouts in their community. Amber is a hard-working mother who tries to maintain a balance between her work and her family.

Trent Johnston: Around 4’3 feet tall, Trent Johnston serves as a grounds supervisor at a college in their hometown in Forsyth, Georgia. He was born on 17th March 1976. Coming from an achondroplastic dwarfism family, he has worked very hard to gain success in his community. He has earned the nickname of “Mr. Fix-It” around his family and his colleagues. He finds joy in recreating the family home for their loving family. He is a complete family guy who wants to fulfill every wish of Amber and their kids. He is the patriarch and the main stem of the Johnston family. He has three adopted kids Alex, Anna and Emma and two biological kids Elizabeth and Jonah.

Jonah Johnston: He is the eldest son and a biological kid of Amber and Trent Johnston. Born on 1st December 1999, he loves to take driving lessons, participate in JV soccer and perform in a marching band. He realized his love for football at a very young age. He gained popularity after appearing as a cast member on the TLC series 7 Little Johnstons. His siblings include Emma, Alex, Anna, and Elizabeth. Recently, a local college accepted his letter of acceptance to attend college and pursue journalism.

Emma Johnston: Emma is Amber and Trent Johnston’s last adopted daughter from China. She joined the family at the age of five. She is cheerful, full of energy and free-spirited kid.

Alex Johnston: Alex is the 4th son in the Johnston family. He was adopted from Seoul, South Korea at a very young age. He is the family jokester who is fond of cracking jokes in his family.

Elizabeth Johnston: Elizabeth also known as Liz is the second biological kid of Amber and Trent Johnston. She is a bright student and down to earth girl. She has a gregarious personality which is loved by all.

7 Little Johnstons Plot: What is it about?

The plot of ‘7 Little Johnstons’ revolves around the Johnston family that suffer from achalasia dwarfism. Each episode presents the daily lives of the family. It showcases their life journey and how they support each other through thick and thin. In one of the previous seasons, the family was forced to stay in a hotel for weeks after selling their home. After a thorough house hunting endeavor, the family finally found their new home. The viewers also saw Jonah enter adulthood. He also graduated high school. Fans of the series were seen congratulating him on their Facebook post for achieving this milestone. In the last season, we also saw Liz and Anna go to the prom and party with friends.

Amber commented about putting the reality back in reality television, saying, “Being able to show some of our struggles will be relatable to viewers because it’s not just that we’re struggling because we’re four feet tall; we’re struggling to raise teenagers or in our marriage. They are things that everybody can relate to, no matter what”.

7 Little Johnstons Season 7 Release Date: When will it premiere?

‘7 Little Johnstons’ Season 6 premiered on TLC on April 2, 2019. As far as the next season goes, we don’t have an official announcement yet. However, we are confident that the show will see another season since the family itself is eager to tell more of their life story. Our best guess is ‘7 Little Johnstons’ Season 7 might release sometime in April, 2020. We will update this section as soon as we hear more.

While we wait for ‘7 Little Johnstons’ Season 7, check out the below clip from the show.