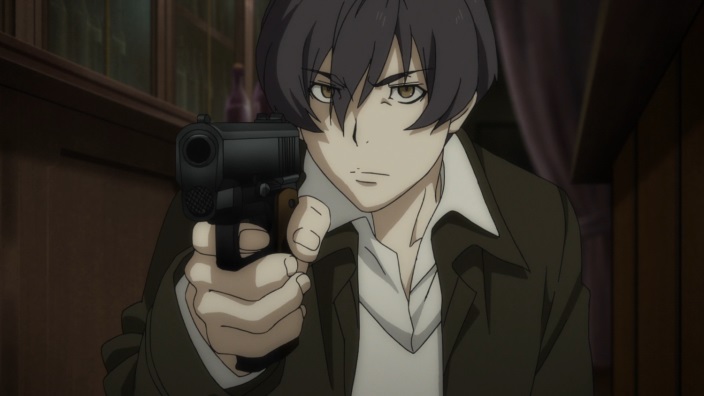 As soon as we’re planted to the world of ’91 Days’ we’re exposed to how cold and straight forwards its story is going to be. It all starts with the events of the past as we’re taken back to the Prohibition era. Everything seems just fine is a home that distantly glows with its warm glow on a cold winter night. But then there’s a sudden knock on the door and that’s how things escalate into the dark world of revenge, crime, drama, and gloom. But even as a story that’s about crime revenge and murder on paper, a lot goes on beyond that. It’s a dark thriller that captivates you with its elements of suspense from time to time. Through the entire span of the season, violence and bloodshed is a common occurrence and the deaths feel as real as they can be. The characters are very well fleshed out and the best part of the show is the deep emotions that are felt by each one of them.

From the poster of the anime where the two protagonists stand with guns pointed at each other, one might assume that this is just another ‘Black Lagoon‘ but it actually goes much beyond a simple crime story. The animation part of it is not all that great and has been done by Studio Shuka that is only for producing the sequel of ‘Durarara!‘. It is still able to portray the dark thriller mood of the anime quite well. The background scores are great and fit right in with the eerie atmosphere of the show. Overall, ’91 Days’ not your typical gangster story that is pandered with fan service and forced action scenes. Instead, it offers a much deeper story that portrays a darker side of the society where the law does not exist.

91 Days Season 2 Release Date: When will it premiere?

’91 Days’ season 1 premiered on July 9, 2016 and went on till October 1, 2016. During this span, it aired a total of 12 episodes with each one of them being 24 minutes long. This season was followed by a “special” 13th episode that premiered on July 5, 2017. ’91 Days’ was very well received by most viewers, especially the ones in the west. So for obvious reasons, most fans were expecting a season 2 soon after the first one came to an end. Even the ending of Season 1 leaves a lot of loose ends, which again, directs towards the chances of its renewal.

Unfortunately, as of now, the creators have made no official claims regarding a new season. However, it is too soon to tell if the show will be renewed in the future or not since the sequels of many anime shows take time. And being an anime original that does not have any source materials, its continuation completely depends on what the creators have planned for it. So let’s hope that the creators will soon make it official and till then, you can always watch the spin-off OVA series of the anime that is titled ’91 Daze’. If there is any official news regarding ’91 Days’ season 2 release date, we will certainly update it here in this section.

The English dub of ’91 Days’ is available on Funimation and Amazon Prime. You can also stream it on Crunchyroll with its original Japanese audio and English subtitles.

Set during the prohibition era, ’91 Days’ is a story of revenge that revolves around a young boy named Angelo Lagusa. As a child, Lagusa lives with his family in a town called Lawless. His peaceful life with his parents and younger brother is completely destroyed when the Vinetti mafia family decides to mercilessly slaughter each one of them. Angelo somehow manages to survive his attack but loses everything that ever mattered to him. He decides to leave everything behind and moves to a new city after adopting a new identity of Avilio Bruno.

Seven years go by and the memories of his past are still crystal clear. That’s when he receives a letter that prompts him to return to lawless and seek revenge. Soon he gets to meet Nero, Vanetti don’s son and uses his manipulation skills to befriend him.

What follows is the story of Angelo who sets out on a journey of vengeance as he slowly kills each and every person who was once involved in the killings of his family members.

Angelo Lagusa is the main protagonist of the show who was orphaned as a child when the Vanetti Don had gunned down his entire family on his birthday. He then decides to leave the town but never forgets what had happened. He later receives a later from a man who claims to be his father’s friends and his old grudge is reawakened. He is a young man with a lean built and an undercut hairstyle with hair that is not slicked back. He has straw-colored eyes with thin eyebrows and a blank expression on his face all the time. More often than not, his expression is so still that it is hard to even tell if he’s alive or dead. As the show progresses, he finds himself in more stressful situations and with time, dark bags appear under his eyes. Even as a child, he pretty much looked the same and the only thing that has changed over the years is the maturity on his face and of course, his height.

Angelo was once a brave and happy little kid who loved his family. For him, his brother and his parents meant everything and his whole world just revolved around them. But after they were murdered, he lost pretty much everything that once gave him a reason to live and he regretted not getting murdered with them. The whole event proves to be very traumatizing for him and forces him to live a completely different life for the years that follow. Over the years, he develops a cold and cynical personality and becomes a professional at picking pockets. The only thing that remains the same about him is his sweet tooth. After spending most of his life alone without much social contact with anyone, as an adult, he finds it hard to express his emotions in any way. He also becomes extremely cold-blooded and is willing to do anything to seek revenge. His only purpose in life is to avenge the death of his family and he is willing to kill anyone who comes in his way. He is also a master at manipulation and often manages to get himself out of tight spots using his intelligence. In the end, he is somehow able to achieve what he always wanted but the deep empty feeling in his heart still remains.

Nero Vanetti is the deuteragonist of the series who later becomes the victim of Angelo’s manipulation. Nero is known for being very a charismatic and outgoing man who does everything with a lot of enthusiasm. He can also be short-tempered a lot of times and when he gets angry, he acts without thinking twice about his decisions. Nero is a chain smoker and has been one since he was 14. Unlike the other members of his family, Nero is not too religious and even skips church whenever he can. For him, nothing in the world matters more than his family and pretty much anyone who knows him likes him for his cheerful personality. He may not show this all the time, but just like his brother, he desperately wants to earn the respect of his father. But no matter how hard he tries, he often feels dissatisfied with all the efforts that he puts into impressing his father.

As an adult, he looks a lot like his father and sports a pointed brown goatee. He has slicked-back brown hair and sports a dark blazer with a brown waistcoat and white shirt underneath it. Nero and Angelo initially become good friends but little does Nero know that his family was responsible for the murder of Angelo’s family. For a while, they seem to be really good friends and Nero even goes of his way sometimes to help Angelo. But in the end, Angelo is driven by nothing but his hunger for revenge and despite his new developed attachment with Nero, he decides to kill him.