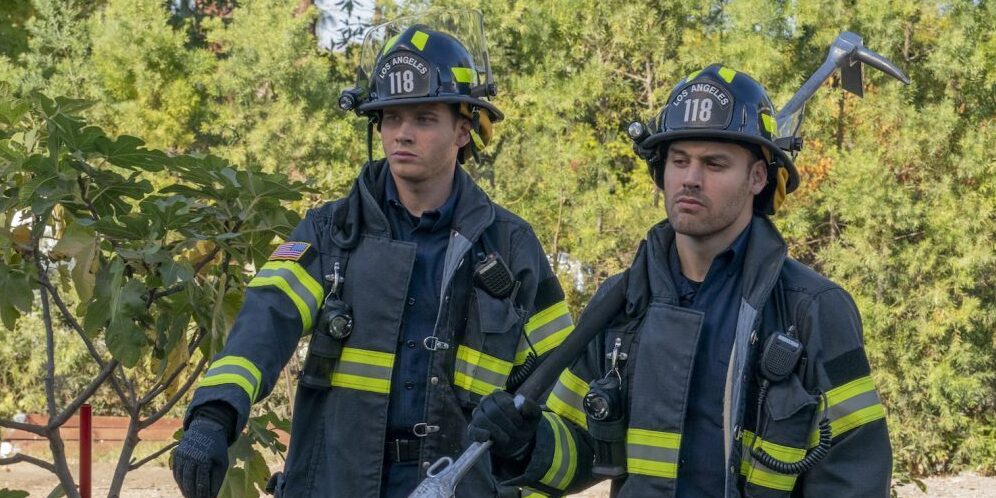 ‘9-1-1’ is a procedural drama that follows the lives of first-responders comprising police officers, emergency medical technicians, firefighters and dispatchers, as they provide assistance at the scene of multiple emergencies in the city of Los Angeles.

Created by Ryan Murphy, Brad Falchuk, and Tim Minear, ‘9-1-1’ Season 3 premiered on September 23, 2019. The show went on a break on December 2, 2019, after airing a total of 10 episodes. In the Christmas special mid-season finale, the 118 deals with a case involving a young boy whose mother’s life is in danger, a woman whose body turns blue after she senses something wrong with her teeth, and a runaway luggage handler. On the personal front, Michael learns that he has a deadly tumor. Maddie’s therapy session forces her to relive the fact that she took the life of her husband. Also, Buck and Athena try to cheer Bobby up by giving him a Christmas treat.

After a hiatus of over three months, the spring premiere dropped on March 16, 2020, with yet another action-packed episode, which involves some good and bad news for the fan-favorites. More on that in the recap section. In case you want to know what happens in the next episode, read on as we unveil to you the details of ‘9-1-1’ season 3 episode 12.

You can watch the ‘9-1-1’ season 3 episode 12 by tuning to Fox at the above-mentioned time. You can also catch the show on Fox’s official website and on the Fox Now app.

The upcoming episode is titled ‘Fools.’

In the episode, we can expect Station 118 to deal with cases that are high on drama and action. It might feature a situation wherein a young man indulges himself in some wild driving stunt, despite a warning from patrol sergeant Athena Grant Nash. Of course, it goes haywire, landing him in trouble.

Another case might involve a disastrous fishing trip, resulting in a kid being trapped in a tunnel. There can also be a case revolving around a train crash on a couple’s first date. Since the two are trapped in the same beam, the team might have to deal with a delicate rescue operation. In a shocking case, Athena might try to make sense of a woman’s claim that she doesn’t remember getting shot in the head. Eddie and Christopher can engage in a conversation that may or may not change their dynamic.

After the cliffhanger ending of the mid-season finale, where we learn about Michael’s diagnosis, this episode opens with him sharing the news with his pal Bobby before telling his ex-wife Athena and their children. He also reveals that the doctors have suggested a brain surgery for his condition. However, he decides not to go forward with it and, instead, live his life on his own terms. It will be interesting to see how the whole of 118 deals with the news.

Although miffed by it, Athena promises to support him in whatever way she can. As for Buck, he finally heaves a sigh of relief after receiving a clean bill of health from his doctor. Chimney’s half-brother Albert makes an appearance and gels well with the 118, irking Chimney, who later makes peace with that and accepts Albert as a roommate. In a sweet and emotional moment, Hen and Karen meet their foster child. But can the good times last for our officers? Or will their world come crashing down soon?