Where to Stream A Madea Family Funeral? 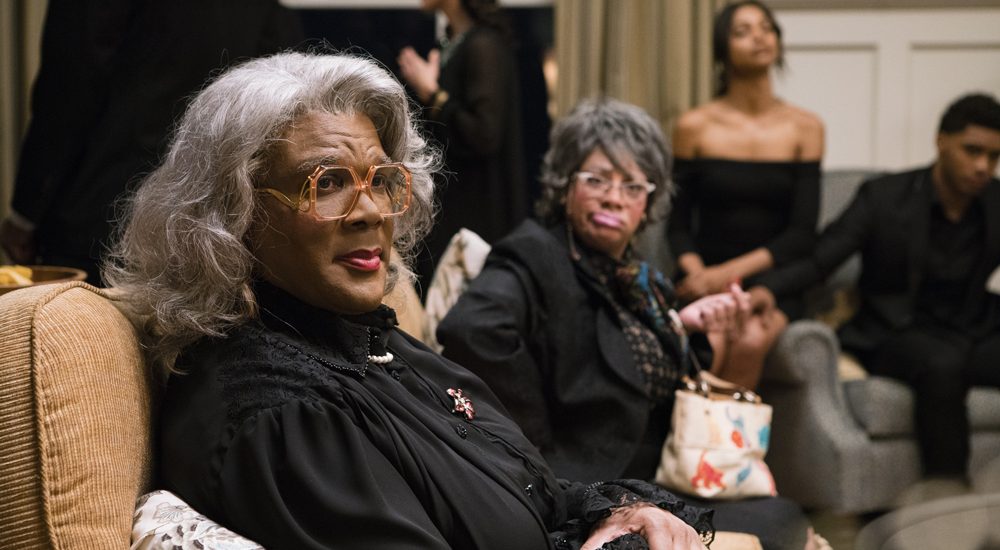 Comedy can come in different forms; it can make you think, or it can have you on the floor laughing. ‘A Madea Family Funeral’ is strictly the second kind, one which does not shy away from slapstick humor to prove the point with this comical family, who find themselves in one hilarious but awkward situation after another.

Tyler Perry has had a long time to whet his sense of humor, as ‘A Madea Family Funeral’ is the eleventh and final installment in the Madea family series. There have been films regarding this family’s Christmas and Halloween celebrations, and one time, about a witness protection program as well. Thus, this new movie about the funeral maintains the tone of awkward social situations that crop up and how the family deals with it.

Though critics have said that the conclusion has been lackluster, I think we can safely keep criticisms aside if we are true fans of the franchise, in order to see how the series ends. If you have not seen ‘A Madea Family Funeral’, you might want to watch it or re-watch it. Either way, we’ll tell you where to watch it, but before that, let us walk you through the story.

What is A Madea Family Funeral About?

‘A Madea Family Funeral’ is directed by Tyler Perry and he himself stars in several roles. It begins with Anthony and Vianne planning their surprise 40th wedding anniversary. Madea (Tyler Perry), Joe, Brian, Aunt Bam (Cassi Davis), and Hattie (Patrice Lovely) travel to the backwoods in Georgia, where the wedding anniversary is being planned. As is the case with this family, no journey is without its fair share of exciting events, and they have to deal with a manic police officer, who is rather rude. Finally, they manage to get to their hotel only to catch Anthony having sex with Renee, Vianne’s best friend. Needless to say, this dampens the mood of the anniversary. To further complicate matters, Anthony’s son, A.J. is in the next room with Gia, his brother Jesse’s fiancee.

If you thought this was awkward, wait till you find out what happens next. Anthony suffers a heart attack, while in the process of having sex, and he is rushed to the hospital, where he is pronounced dead. It is upon A.J. and Madea’s group to keep the exact cause of Anthony’s death a secret from the rest of the family. As if all this was not enough, A.J. and Renee keep blackmailing each other to keep their sex lives a secret, and A.J. even ends up blaming Renee for his father’s affair and death. But all this has to be put behind as a funeral has to be arranged for Anthony. Vianne wants this in two days and asks Madea to organize it, thus making everyone suspicious of her.

As I said, the family has the worst luck when it comes to awkward social situations and the undertaker happens to give off a creepy vibe to some of the family members. Making matters worse is the information that Anthony died smiling and the casket cannot be closed because of his erection. When the funeral starts, the situation only worsens, as many of Anthony’s mistresses begin to show up, which upsets Vianne quite a lot. The service, which runs for a few hours, is rudely interrupted when the casket springs open due to Anthony’s erection!

Later on, things get worse instead of better. A.J. gets drunk and in a state of inebriation, he reveals that Anthony and Renee were having an affair. Renee uses this opportunity to expose A.J. and Gia’s affair. As a result, A.J.’s wife, Carol, who felt disrespected by her husband all weekend, decides to walk out of the marriage. Jesse and A.J. also have a fight. Things come to a head when Vianne tearfully reveals that Anthony had been cheating on her for years, and she only stayed with him to protect the family. However, his death lets her go out and live for herself, and she decides to do this with Roy (Mike Tyson). She departs, wishing the family well, and leaves for Las Vegas.

It is indeed a touching film, which manages to be equally hilarious, and now, let us tell you where to watch ‘A Madea Family Funeral’.

Is A Madea Family Funeral On Netflix?

Netflix has a wonderful collection of movies, and family movies are no exception. Though ‘A Madea Family Funeral’ is not on the platform, you can check out another adventurous and wholesome family film, ‘Benji‘.

Is A Madea Family Funeral On Hulu?

Hulu has a smart collection of films and television shows that ensures everyone is satisfied. Though ‘A Madea Family Funeral’ is not on the platform, you can enjoy another film from the franchise, that is, ‘Boo 2! A Madea Halloween‘.

Is A Madea Family Funeral On Amazon Prime?

Amazon Prime has a library that cannot be easily bested and is comparable to Netflix. Though Prime subscribers cannot watch ‘A Madea Family Funeral’ on the platform as is, they can rent or buy the movie. It costs $5.99 to rent and $14.99 to buy it. We recommend that you save some money and rent it unless you want to add it to your permanent collection of movies. Check it out here.

Where Can I Stream A Madea Family Funeral Online?

If you want to watch ‘A Madea Family Funeral’ elsewhere, don’t let anybody stop you from doing so. Head over to YouTube, Vudu or FandangoNow, and rent or buy the movie. All the sites will let you rent it for $5.99 and buy it for $14.99, so choose accordingly.

Is A Madea Family Funeral Out on DVD and BluRay?

Yes, ‘A Madea Family Funeral’ is out on DVD and BluRay and has been available since June 4, 2019. Check it out here.

Where Can I Watch A Madea Family Funeral Online For Free?

Sorry freeloaders, but I have some bad news for you. Unless ‘A Madea Family Funeral’ comes to one of the platforms with a free trial period, you cannot watch the movie for free using any legal means.

And besides, it is our recommendation that the readers pay for all the art that they consume.