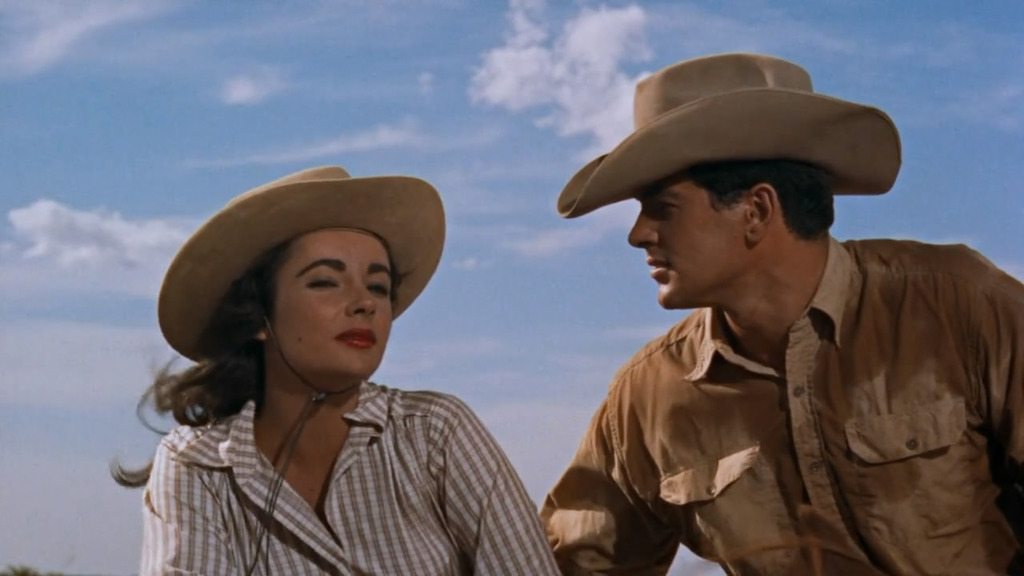 George Stevens, more so than any director before him, understood how to best utilize James Dean in a film. Dean had such an electric personality, and was a master of the scene steal, by just his third film he had alienated his fellow actors, and made enemies of his directors. He exploded into cinema as Cal in East of Eden (1995) a mannered and often over the top performance, and then was seen in Rebel Without a Cause (1955) as a tortured teen. With Dean starring in those two film, the films became all about him, and often his acting style took you out of the story. But Stevens had a plan and that was to use Dean in a supporting role, which would result in the best performance of the actors all too short career.

The film tells the story of Bick Benedict (Rock Hudson) who marries Leslie Benedict (Elizabeth Taylor) and brings her to his massive ranch in Texas where he raises beef cattle. The adjustment is a difficult one for Leslie, the Texas heat being punishing, but she makes it, and is soon running the ranch with her husband, much to the chagrin of her sister-in-law, Luz (Mercedes McCambridge). One of the people Leslie befriends is the surly ranch hand Jett Rink (Dean) who despises Bick, but soon falls in love with Leslie.

All around the ranch oil is being discovered, making the beef ranchers wealthy beyond their dreams.

When Luz is killed while breaking a horse, she leaves a small parcel of land on the ranch to Jett, who is delighted with this show of kindness. He works the land, and soon strikes oil, which will make him fabulously wealthy, and a deeper enemy of Bick, whom he insults by making his love known for Bick’s wife.

The years pass, Bick and Leslie raise their family, strike oil on their own land, and watch as Jett becomes more and more powerful, and more wealthy than anyone in Texas. Yet his soul has been corrupted by greed and power, believing the more he has the more favorably Leslie will look upon him. And when she refuses him, he targets their daughter, which enrages Bick. Eventually the two men finally come to blows at a dinner Jett throws, and the young girl finally sees a drunken Jett for what he is, forever smitten  by her mother, left with his wealth and little else. Appalled and disgusted, she walks away from him.

The film made a strong commentary about the racism that exists in Texas towards Mexicans, with a storyline that has one of Bick’s sons marry a Mexican girl. Bick will eventually fight for their right to be served in a restaurant where the owner refuses to serve Mexicans. Despite his immense wealth, because his daughter is Mexican, the great Bick Benedict is refused service.

Giant (1956) was a huge success, despite being little more than a soap opera set in Texas, with a strong Dean performance. There are many memorable Dean moments, walking out the size of his land, his steps jaunty and near giddy,; the look of absolute joy when he strikes oil and it rains down on him turning him black; going to Bick covered in oil, making clear his contempt for Bick and love of his wife, and climbing his water tower in fire a shot in the air to let Leslie know he was close by. Where Dean faltered was in the later scenes where he was asked to play Jett as an older man in his fifties. If anything, those moments proved that Dean would have been just another limited actor. As the young Jett he was superb, surly and angry, always on the edge of the screen, always a presence, but when put front and center, he is the weakness, never managing to convince he is fifty, and looking quite honestly like a high school actor trying to portray an older man.

Rock Hudson does well as Bick, but he was never much of an actor, more of a move star, and he certainly did not care for Dean, who worked to suck the energy out of every scene and gave little back to the other actors. Taylor fares better, though was a gifted actress, and many were not yet aware of her substantial gifts. She and Dean threw sparks onscreen and watching the gentle dance they do around one another was a joy of good acting.

The film was nominated for ten Academy Awards including Best Picture, Best Actor twice (Dean and Hudson) and Best Director, which was the only Oscar it won. Stevens managed to capture the sprawling size of Texas, where everything is just bigger, as well as the intimate storylines. It is Dean in the early scenes who despite not a lot of screen time holds the audience attention. He died before finishing his looping of the drunken scene, leaving another actor to do it. Dean had mumbled so badly during the scenes he could not be understood, so Stevens looped in dialogue.

It is bizarre that the film shows Dean at his very best in the early scenes, and yet displays his obvious limitations as an actor in the later sequences. Dustin Hoffman was in his thirties when he portrayed a one hundred and twenty year old man, and did so brilliantly…it was a matter of talent. Consider Brando, forty-five when he portrayed a seventy-five year old mafia chieftain in The Godfather (1972) and again perfect, yet Dean was not convincing at twenty-four portraying a fifty-five year old man. His death made him a legend, and immortal. Had he lived, I am not sure we would speak his name with such awe…well some of us.

I welcome suggestions or comments, and if you would like me to cover a particular film please e-mail me at [email protected]