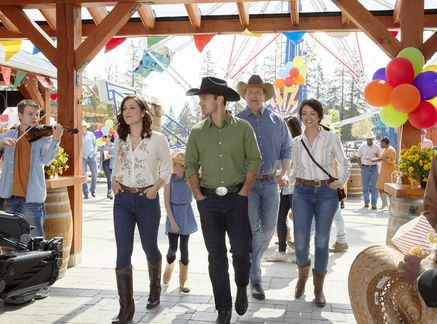 Small towns and the countryside have a charm that cities cannot match. Everyone knows everyone and there is nature all around. This really helps one be grounded and be true to oneself. Moreover, when the sun is out, the fun almost seems to double itself, bringing with it an impeccable sense of warmth. Hallmark movies have been known for their portrayal of small towns and they capture the spirit aptly. With ‘A Summer Romance,’ the network does not disappoint either.

Hallmark prides itself as “the heart of TV”  and it deserves to do so. Unlike the high frequency of dark movies and TV shows these days, Hallmark’s productions are light, cheery, and candy-coated. They help viewers forget the melancholic drudgery of life and immerse themselves in stories that make one positive and hopeful.

‘A Summer Romance’ employs a familiar Hallmark conflict: that of people with conflicting positions connecting and finding love. In the case of Hallmark, familiarity spells comfort though. The movie is about a ranch and its possession. The ranch is owned by Samantha and is located in Montana. It is her family legacy and she is quite proud of it. A developer, Richard shows up to purchase the ranch since he wants to convert it into a resort. However, Samantha is not interested. Richard attempts to win her over while Samantha tries to show him the charm of the ranch just the way that it is. Amidst this, however, will the two end up falling in love with each other?

‘A Summer Romance’ is a movie that is set almost entirely in a ranch and a small town. The setting is quite integral to the movie. For instance, there is a town fair that proves to be crucial to the plot. Such tiny details in the setting make it function as an entire character. The ranch and the town are depicted to be located in Montana. Hence, it is natural for viewers to wonder where the production was actually filmed. Was it shot in Montana? Or was some other location used to depict it?

‘A Summer Romance’ was not actually filmed in Montana. Instead, it was shot in Canada. This is where most Hallmark movies are filmed. Apart from providing some breathtaking locales, Canada also gives lucrative tax credits to productions that opt to film in the country. This helps producers cut down on their filming costs and also brings in employment opportunities for the locals.

‘A Summer Romance’ was filmed in the British Columbia region of Canada. To be more specific, one of the filming locations was Surrey, as proven by the following post:

I think the hat’s growing on me. Figuratively speaking. #hallmarkchannel #duderanch #onset #stillworkingoncantering

Here are some other behind-the-scenes pictures:

If you ever lose track of me on set, look for animals or food, haha. #fbf to my new @hallmarkchannel movie ‘A Summer Romance’ which airs TOMORROW at 9/8c….check it out! 🤙🏽

Lunchtime concerts in the park with the tiny rockstar. 🤘🏽🤘🏽#lifeofadventure #imnotverygoodbutshesverysupportive #hallmarkunplugged

A Summer Romance Cast: Who is in it?

The cast of ‘A Summer Romance’ is led by Erin Krakow. She plays the character of Samantha. Some of the other productions that you might have seen her in include ‘When Calls The Heart,’ ‘Good Girls Revolt’ and ‘NCIS.’ Starring opposite Krakow is Ryan Paevey who plays Richard. Other cast members of the movie include Sarah Strange, Kevin O’Grady, Ava Grace Cooper, and Geoff Gustafson.