A Total War Saga: Troy: Everything We Know 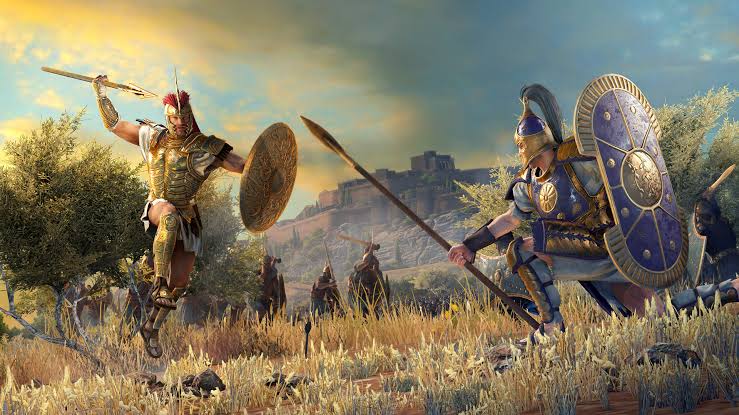 The ‘Total War’ series is one of the most celebrated strategy franchises in gaming history. The series has spanned over 13 mainline entries over the decades starting with the 2000 game, ‘Shogun: Total War’ set in feudal Japan.

Since then, franchise creator Creative Assembly has developed a number of ‘Total War’ games set in a variety of different historical and mythological time periods, with the most recent one, titled ‘Total War: Three Kingdoms’ set in China during the Three Kingdoms era.

Now, as the franchise enters its third decade in existence, Creative Assembly is gearing up to go farther back in history than ever before and explore the epic, tragic and seminal events described in legendary Greek author Homer’s ‘Iliad’. Read on to find out everything we know about the upcoming game titled ‘A Total War Saga: Troy’.

A Total War Saga: Troy Gameplay: What to Expect?

The ‘Total War’ games are a series of strategy games that combine turn-based aspects with fully real-time battles. What has truly set ‘Total War’ apart from other RTS (Real-Time Strategy) games over the years is the way it handles individual units and combats.

In ‘Total War’, each unit is individually designed and animated, and battles consist of hundreds of these units clashing with each other in a murderous rage. You can zoom out to view the battle from a strategic perspective, or you can zoom right in to watch individual soldiers fight amongst a sea of other combatants.

The series has always been known for its attention to detail – units are always authentic to the time period, with meticulously researched and animated armor design, weapons and combat style. Depending on the time period, combat tactics can vary greatly, with some games focusing on naval combat, while others prioritize sieges. Many of the more mythical ‘Total War’ titles even feature supernatural elements such as magic and various creatures of folklore.

As the name would suggest, ‘A Total War Saga: Troy’ is set in the Bronze Age during the height of the conflict between Greeks and Trojans. The game is not simply limited to Troy and will take place all across the Aegean Sea. The basic premise is simple – Trojan Prince Paris has eloped with Helen, the wife of Menelaus, King of Mycenaean Sparta. Together with his brother Agamemnon, the King of Mycenae, the two amass a massive invading army consisting of several Greek Heroes of immense repute such as Achilles and Odysseus.

You can play as one of eight different factions including the Trojans themselves. However, being a ‘Total War’ sandbox game, you are not limited by the confines of history (or in this case, mythology) in what you do. Depending on how you choose to play, you will have a great degree of freedom in how you want to approach the conflict. You can even choose to betray your own side for personal gain, should you wish to do so.

A key component of ‘A Total War Saga: Troy’ is the hero system. The Battle of Troy was a conflict that began and ended based on the decisions and fates of its heroes. The game seeks to incorporate those elements in the combat as well, with Achilles, Agamemnon, Hector, and a Minotaur already confirmed to be featured in the game.

Hero characters will possess devastating martial skills and the ability to decimate entire units all by themselves. Heroes will also occasionally challenge each other in the middle of the battlefield, much like in the writings of Homer. Heroes such as Odysseus will also be able to undertake personal side quests which unlock legendary weapons and other bonuses.

However, despite the mythical roots of the source material, ‘A Total War Saga: Troy’ will be largely grounded in authentic history. The gods do play a part in the game, but in a much more subtle manner compared to the mythology. You honor the gods by building temples in their name to earn bonus effects.

Mythological creatures such as Centaurs and Minotaurs are present in the game but only in name. Centaurs are just human soldiers on horseback, while the Minotaur is an abnormally large human wearing a bull skull and possessing extraordinary fighting capabilities.

A Total War Saga: Troy Developers: Who Are the People Behind the Game?

‘A Total War Saga: Troy’ is being published by Sega.

A Total War Saga: Troy Release Date: When and Where Can I Play It?

‘A Total War Saga: Troy’ does not have a concrete release date yet but it has been confirmed that the game will release sometime in 2020.

As with all other ‘Total War’ games, ‘A Total War Saga: Troy’ will be playable exclusively on the PC.

You can watch the trailer for ‘A Total War Saga: Troy’ right here.