Is A Walk to Remember Based on a Novel? 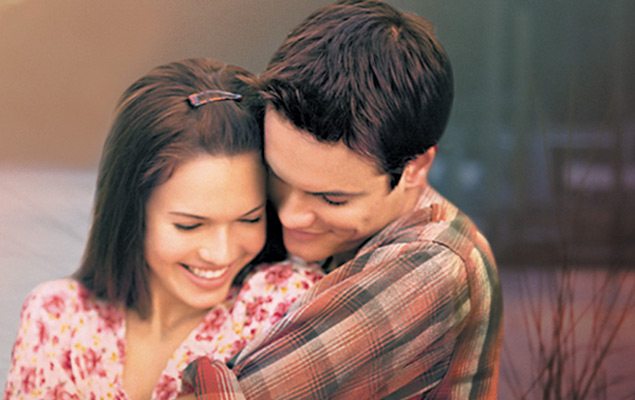 Starring Shane West and Mandy Moore, ‘A Walk to Remember’ is still considered to be a wonderful and uplifting teen romance classic. Although quite simple in context with its plot, the film manages to reach enough depth with its well-written characters and the performances of its cast. Even when it comes to the religious themes of its story, it subtly interlaces them with its overarching premise and eventually leaves you with an optimistic feeling. If you’ve watched the movie, you’ll be surprised to know that it is actually inspired by real-life events. Read on further to know more.

Is A Walk to Remember Based on a True Story?

‘A Walk to Remember’ is not based on a true story. It is based on a novel of the same name written by renowned romance author Nicolas Sparks. Even so, while the characters of the movie are a work of fiction, its storyline is inspired by Nicolas Sparks’ real-life events. According to the author’s official website, ‘A Walk to Remember’ was his favorite novel to write as it is inspired by his own sister. Like Jamie from the movie, even his sister had a very strong sense of faith and stayed cheerful no matter what. Just like the character, his sister, too, later got cancer, but getting married was on top of her bucket list.

Just like the movie, even his sister ended up falling for a guy who initially could not stand her but later wanted to marry her even after knowing about her illness. Like Landon, he did, eventually, marry Nicolas Sparks’ sister and she later died at the age of thirty-three. According to Sparks, the story not only serves as a reflection of his sister but also depicts the wonderful thing that her husband did for her.

How Different is A Walk to Remember from the Original Novel?

For the most part, the filmmakers of ‘A Walk to Remember’ have ensured that it is a loyal adaptation of the source. Even so, a few minor changes were made to its storyline to make it more relatable and relevant for teens of the 1990s. To make it seem more contemporary, the movie’s depiction of  Landon’s pranks and his initial absurd behavior is a lot worse than Sparks’ description of the character in the novel. This was done intentionally because the book’s representation of a “50s rebellious teen” was a lot less “rough” compared to the teens depicted in the movie’s 90s timeline.

Moreover, for the movie, Nicolas Sparks also completely changed the school play through which Landon and Jamie get close to each other. Another significant difference between the movie and the novel is the ending. While the book remains ambiguous about Jamie’s death, the movie makes it pretty evident by portraying Landon and Jamie’s father’s grief. Nicolas Sparks chose an ambiguous ending for his novel because he wanted to reflect on what he felt when his sister went through the same. He had written the novel knowing that Jamie would eventually die, but he grew very fond of the character and hoped that she lived.