Did Aaron Hernandez Commit Suicide Because of CTE? 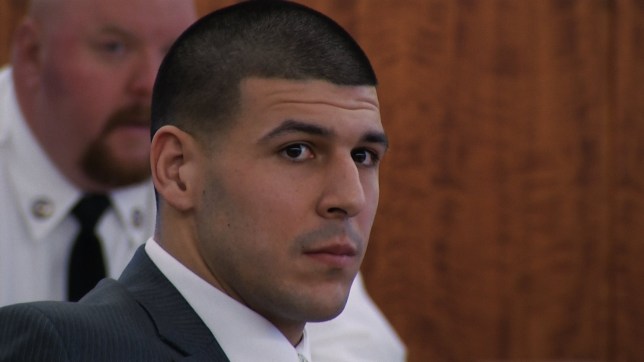 What turns a man into a cold-blooded murderer and ultimately makes him end his own life? Netflix‘s latest true crime docuseries, ‘Killer Inside: The Mind of Aaron Hernandez’ sheds some light on this, letting us take a peek into the life and mind of the former NFL star turned murder convict. We slowly piece together the dual life the former Patriots tight-end led, one that was filled with childhood trauma, violence, substance abuse and homophobia.

In the final part of the docuseries, we learn that Aaron commits suicide in 2017 while serving his sentence in prison. His final action was completely unexpected. But then, so were acts of violence he commited. The reasons never made sense. When Aaron killed himself, he had just been acquitted of the Boston murders, and he had sent an appeal to the court for his life-sentence for Lloyd’s murder.

In the last video recordings of him during the trial for the Boston case, Aaron seems happy and relieved. But five days later, Aaron commits suicide in his cell. What led to this? Why did Aaron Hernandez kill himself? Some say it had something to do with being publicly outed on the radio by Michele McPhee. But things took another drastic turn when Aaron’s brain was donated to Boston University. We then learn about the severe case of CTE that he was suffering from – a brain disorder that had led others to a similar fate in the past. But what exactly is CTE? Was it really responsible for Aaron’s suicide?

CTE stands for Chronic Traumatic Encephalopathy, a progressive degenerative brain disease common in athletes (particularly boxers and football players), and military veterans. It is found in people with a history of repetitive brain trauma which primarily includes concussions. In CTE, a certain type of protein called Tau forms clumps that spread throughout the brain, killing brain cells, and generally lead to memory related issues. But the symptoms don’t usually begin until years after the injuries.

CTE was first described in 1928 as “punch drunk syndrome” when Dr. Harrison Martland studied a group of boxers. Research on CTE has been ongoing ever since. People with CTE experience problems with thinking and memory, as well as cognitive and behavioural symptoms related to mood – which usually show up in the patient’s 40s or 50s. These include memory loss, paranoia, confusion, aggression, impulse control issues, and even depression. Unfortunately, according neurologist Charles Bernick, the brain must be examined in autopsy as “There’s no way to diagnose CTE when someone is alive”. 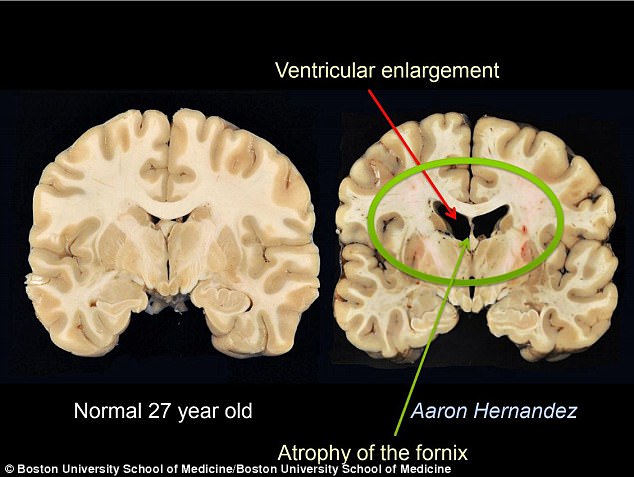 Dr. Ann McKee leads the VA-BU-CLF Brain Bank which has revolutionized our understanding of CTE. After Aaron Hernandez’s suicide, his brain was donated to the bank. She conducted neuropathological examination on the brain and presented the findings at Boston University. In September 2017, she diagnosed him with CTE which is fairly common in the football world, including NFL players like Junior Seau, Ken Stabler and Frank Gifford.

But the severity of CTE in Aaron’s case was shocking. Dr. McKee concluded that Hernandez had Stage III CTE (of the four stages). It was the most severe case of CTE seen in someone as young as 27. McKee confirmed that she had never encountered such extreme degradation in a young brain with such severe tissue damage and microbleeds in regions that affect memory, impulse control and behaviour. The most damaged regions in Aaron’s brain included the frontal and temporal lobes – which are involved in problem, solving, judgement and behaviour. 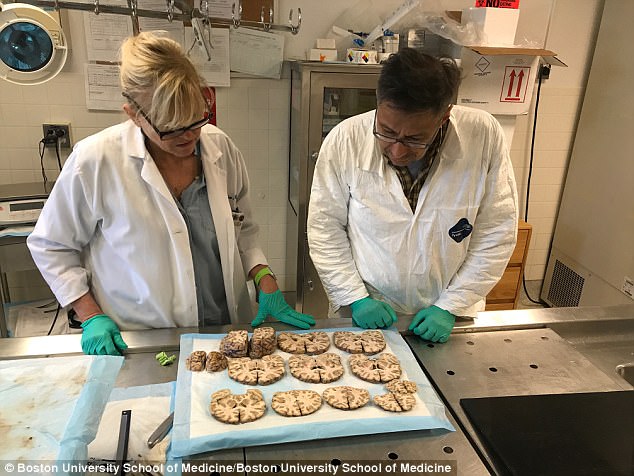 In addition, the findings confirmed that Hernandez had early brain atrophy and large perforations in the septum pellucidum, as well as ventricle enlargement. The findings also revealed a variant of the APOE gene in Aaron’s brain which has links to increased risk of Alzheimer’s and other brain diseases.

Did Aaron Hernandez Commit Suicide Because of CTE?

One can form connections between Aaron’s behaviour and the CTE diagnosis. This could explain his conversations with his mother that used to go from being tender and loving to him being angry and blaming her for things. It could perhaps also explain his aggressiveness and paranoia as both are symptoms of CTE and is also found in individuals suffering from dementia (a key symptom of the disease). According to the former NFL star, Brandon Lloyd, he was warned by another player about Hernandez’s behaviour. He was told to expect Hernandez to behave erratically and provocatively, alternating between warm and jovial to aggressively raging.

Hernandez’s fiance, as well as his former attorney have come to accept that Aaron’s behavior was in some way or another influenced by his severe CTE. They even filed a suit against NFL for their brutal ignorance on the matter. But Dr. McKee isn’t too sure if it was the reason behind his criminal and suicidal acts.

But former football player Junior Seau also committed suicide after suffering from CTE. Along with this, research has proven “a purported association” between frontotemporal damage and criminal behaviour. Though frontotemporal degeneration is a separate issue, the two do have common links. Having said that, none of these really prove that CTE was responsible for Aaron’s suicide. During the annual CTE conference, Dr. McKee stated:

“In any individual, we can’t take the pathology and explain the behavior…But we can say collectively, in our collective experience, that individuals with CTE and CTE of this severity have difficulty with impulse control, decision making, inhibition or impulses or aggression, often emotional volatility and rage behavior.”

There are also other factors to consider when one looks at Hernandez’s suicide. There was substance abuse involved, it was stated that Aaron had consumed synthetic marijuana before he committed suicide. Along with this, the aggression could have been a result of steroids such as testosterone. Other factors could easily include Aaron’s financial issues, his childhood trauma, being publicly outed, and perhaps even his guilt.