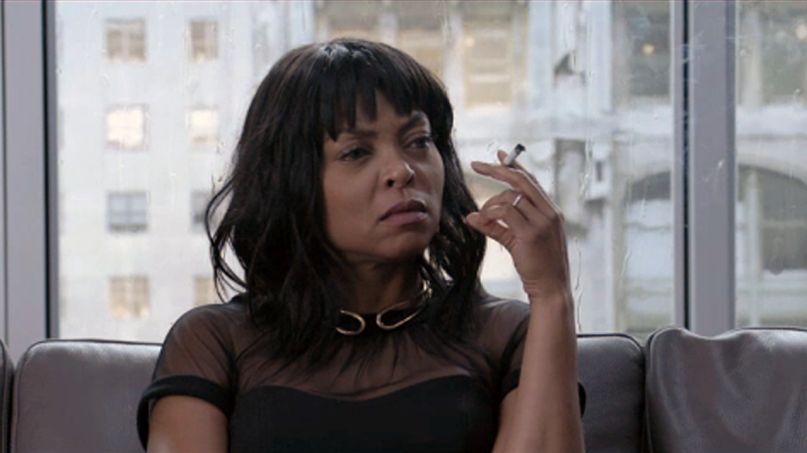 Tyler Perry’s ‘Acrimony’ tells the story of a marriage falling apart at the seams. In ‘Acrimony,’ Melinda (Taraji P. Henson), a well-to-do suburbanite with an enviable inheritance, financially supports her out-of-work husband, Robert (Lyriq Bent). Their marriage is rife with unspent tension. Robert has prior felonies to his name, making it difficult for him to land a job. He spends his time day-dreaming about conceiving and selling an unprecedented battery to a famed venture capitalist, Prescott. An old flame of his, Diana, who now works under Prescott, scores Robert a meeting with the VC.

The meeting goes well, and Robert is offered an eye-catching amount of money for his prototype. Deeming this too low a sum, Robert declines the offer. When Melinda learns of Robert’s association with Diana and his rejection of Prescott’s money, she nearly spontaneously combusts with rage. She files for divorce immediately. A while later, Melinda learns that not only has Robert made a name and a sizable amount of money for himself from eventually selling his prototype at a much higher rate, but he has also found himself a fiancé in Diana. A harrowed Melinda vows vengeance.

Having subsidized Robert’s inventions and been at his side through thick and thin, she believes herself deserving of the life Diana now leads. She attempts to seek out a legal remedy but finds none. Melinda resorts to destruction and destroys Diana’s wedding dress. She is caught, mandated counseling, and subsequently diagnosed with Borderline Personality Disorder. As Diana and Robert’s wedding day nears, Melinda begins to look worse for wear. When she learns of Diana’s pregnancy, she all but goes off the deep end. When the wedding day arrives, Melinda attempts to ruin it but is stopped short by her family. The two love birds celebrate their wedding day as Melinda continues to plot revenge.

Acrimony’s ending is a hair-raising, keep-you-on-your-toes one. Melinda tracks down the newly married couple – who have embarked on their honeymoon cruise – and prepares to carry out a nefarious plan. She sneaks onto the boat, and, the moment Diana obliviously leaves Robert’s side, she pounces on him. She brandishes a gun at him while lamenting the failure of their relationship. Melinda threatens to shoot Robert if he doesn’t take drastic steps to reunite with her – steps that involve throwing Diana overboard. When he refuses and attempts to pacify her, she shoots him in the stomach.

In a chilling scene, when the entire crew starts to intervene, she orders them to jump ship and dive into the icy-cold water. Eyeing the gun in her hands, they follow through with her orders. Hearing the commotion on the deck, Diana hurries over. Melinda leaves an injured Robert alone and gives Diana chase. Just when Melinda’s finger is inches away from pulling the trigger at a terrified Diana, Robert arrives, overpowers her and, throws her overboard.

Once the threat to their life is (supposedly) gone, Diana rushes over to her husband and examines his bullet would. It appears to be benign, and the couple heaves a sigh of relief. Diana leaves in a dinghy to rescue the men overboard. No sooner is Diana out of sight than Melinda returns. She chases after Robert with an ax and hacks off a chunk of his leg. Before she can get any further, she is trapped by the boat’s anchor – by no hand of Robert – and pulled off into the deep blue waters. As she drowns, Diana arrives with the rescued crew members and comforts Robert.

Who is the Villain in Acrimony?

‘Acrimony’ heavily emphasizes on hearing both sides of the story before making hastened judgments. Individual character moralities in the film are not black or white, but grey. Initially, we are led to believe that Melinda is the perfect, loyal wife to Robert, driven to her wit’s end by her husband’s betrayal and self-serving behavior. Initially, the tale is told solely through Melinda’s point of view. She hems, haws and laments, and we go along for the ride. Only once we’ve invested ourselves in Melinda’s narration and character, do we realize that Melinda is the most unreliable of all narrators.

Along with Melinda, we, too, leap to conclusions about Robert’s unfaithful motives. But throughout the film, we learn that Robert is far from what Melinda makes him out to be. He’s thoughtful and perceptive – he returns Melinda’s money in full with an exceptional amount of interest. He also shows profound compassion – he’s eternally grateful to Diana for her support and pledges to marry her. With this, the movie turns the tropes of hero and villain on their heads and makes us confront the complexities and dualities of its characters.

As audiences, we’re conditioned to group characters into boxes – good, bad, worse, worst – from the minute the title sequence rolls. Perry asks us to think outside the box. He advocates patience and self-restraint on the part of the viewer. Good characters can be driven to committing heinous deeds and vice versa. And so, ‘Acrimony’ is less a story about who’s the villain and who’s the hero, and more a cautionary tale about the ease with which one can jump to the easiest, most readily available conclusions.

Simply put, yes. Melinda’s death is her own undoing. Even after inflicting immense pain on Robert and exacting plenty of revenge, she won’t leave well enough alone; her appetite for revenge is insatiable. On the other hand, revenge is the last thing on Robert’s mind – and this is despite Melinda attempting to chop him up into bits with an ax, terrifying the daylights out of his fiancé, and threatening his crew. In fact, in an act of heroic proportions, Robert attempts to save the woman who’s trying to murder him.

When the anchor traps Melinda and drags her to the very bottom of the sea, we see Robert actually attempting to fish her out of the water. Unfortunately for him and Melinda, his injuries leave him debilitated and unable to muster the strength to pull her out. Whether Melinda realizes Robert’s efforts, we do not see. She floats to the seabed like a ghostly apparition.

What Do the Emotional Spectrums Signify?

The movie is segmented into five parts – each named after a particular emotional spectrum. Melinda’s Borderline Personality Disorder (BPD), also known as Emotionally Unstable Personality Disorder (EUPD), is a crucial part of ‘Acrimony’s’ plot. In clinical practice, a person with BPD is often characterized as having strong emotional reactions, often wildly disproportionate to the situation at hand. The emotional spectrums – namely, Acrimony, Sunder, Bewail, Deranged, and Inexorable – are a fitting way to illustrate the enormity and severity of Melinda’s emotions.

In a way, through this, Perry implores us to empathize with the range of emotions Melinda is experiencing. We begin with Acrimony, a feeling of intense bitterness. For Melinda, this bitterness sows the seeds for the horrors still to come. Next comes Sunder, the act of breaking apart. Seeing Robert’s meteoric rise to success shocks Melinda to the core and causes her already fragile state of mind to disintegrate. Following that is Bewail, an act of lamentation.

On seeing Robert and Diana wildly in love and inseparable evokes a profound feeling of agony within Melinda. The penultimate emotion is Deranged. In many ways, learning about Diana’s pregnancy is the final straw for Melinda. So heartbroken is she at the couple’s newfound joy that she begins to disassociate from reality. We end with Inexorable, a state of mind so intense that it is impossible to prevent or stop. Perry implies that Melinda has gone off the deep end, and for her, there’s no turning back.

Read More: Is Acrimony Based on a True Story?