‘A.I.C.O Incarnation‘ is just another sci-fi show that has been recently included in Netflix’s growing list of anime-original series. This 12-episode anime tells a surprisingly deep story that has all kinds of unexpected twists and turns along with some old school action scenes that will remind you of the “returning back to base camp to refuel” setup of several video games. With a lot going on, the anime keeps you at the edge of your seat at all times but its biggest problem is its short runtime. All the way till the 10th episode, it seemed to be doing just fine and barely had any issues with its pacing. But in the last few episodes, the story literally bombards you with revelation after revelation, most of which goes way over the head of most viewers. Apart from that, everything else about the anime seems to be on point, especially its exhilarating soundtracks. The intense racing piano tracks during action scenes and the opening and closing themes just add to the overall viewing experience.

Created by Bones Studio, which is known for producing other great anime shows like ‘Soul Eater‘ and ‘Noragami‘, the animation lives up to the standards of the studio but there’s nothing too special about it. What’s impressive is its subtle use of CGI during action scenes and its gory but effective depiction of “The Burst”. So overall, ‘A.I.C.O Incarnation’ is not at all a below average anime and is actually quite underappreciated. And one big reason why it has been facing so much criticism is because of its overwhelming depth that is only unveiled in the end. So, like most viewers, if you still have some unanswered question and are struggling to make sense out of everything that the story throws at you in the last few moments, then this article is just for you. 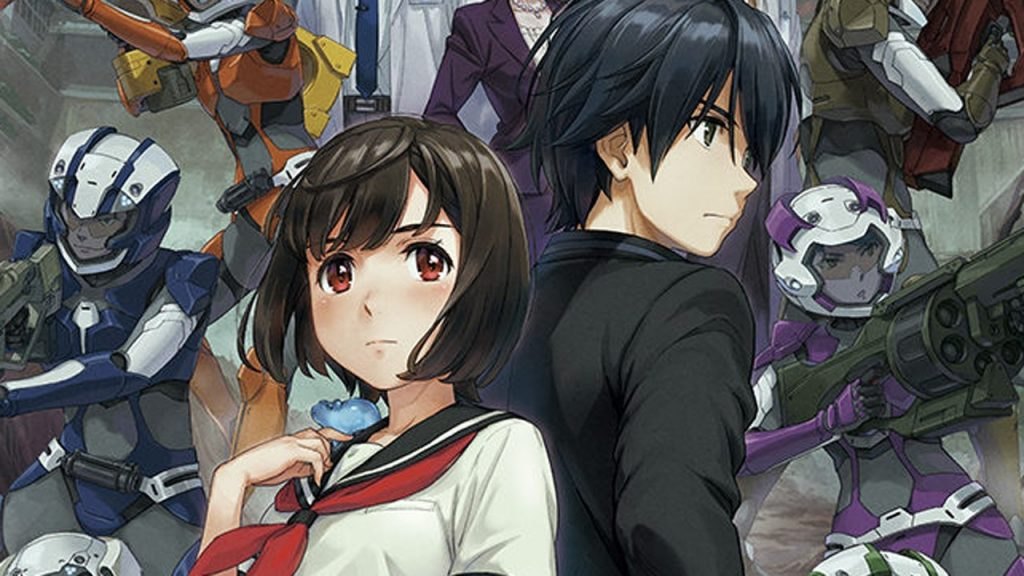 Set in the near future, ‘A.I.C.O Incarnation‘ starts off by portraying a technologically advanced city where “the Burst” first originates. The catastrophe which involves a giant mass of red matter quickly spreads to the outskirts of city and destroys every single thing that comes in its way. It turns out that certain researchers have been experimenting with artificial life which first led to the origin of the red matter. After it started spreading everywhere, instead of incinerating it on the spot, the researchers chose to hide it behind a wall so that they can continue studying its nature.

Just a few days before the catastrophe, the main protagonist Aiko gets into a car accident with her father and later, her mother and brother are killed by the red matter. Jumping two years of ahead of these events, Aiko seems to be recovering from the accident and is wheelchair-bound. She lives a relatively peaceful life where she only returns home to doctors every single day. But all of this changes when a mysterious transfer student named Yuya Kanzaki joins her school. He tells her that she’s nothing but an artificial copy created by her own father before he was killed in the car accident and she was barely left alive. He informs her that she must quickly return to the primary point of the burst in order to stop the red matter from spreading further and taking more innocent lives.

At first, she gets too overwhelmed by this and is not able to figure out how she must react to the boy’s claims. But without any further delay, Yuya demonstrates to her how to toughen her outer skin by slashing a sharp blade across her face. To her surprise, the blade breaks into pieces and only leaves her with a purple mark on her face. Along with a group of divers, who are all funded by a secretive scientist who wishes to destroy the matter instead of studying it, the two head to the primary point of the matter. Although for the most part the story of the anime revolves around how they used advanced weapons to survive in the post-apocalyptic setup of the destroyed city, the last few episodes come out with some major revelations.

What Caused The Burst?

The Burst occurs when Dr. Yura tries to reincarnate Aiko after she is left in a half-dead state post the car accident. When Aiko’s body sends out a distress signal to all of her other cells, it causes the cells to drastically expand, which further leads to the catastrophic events of “The Burst”.

The Ending – Who is the Real Aiko? 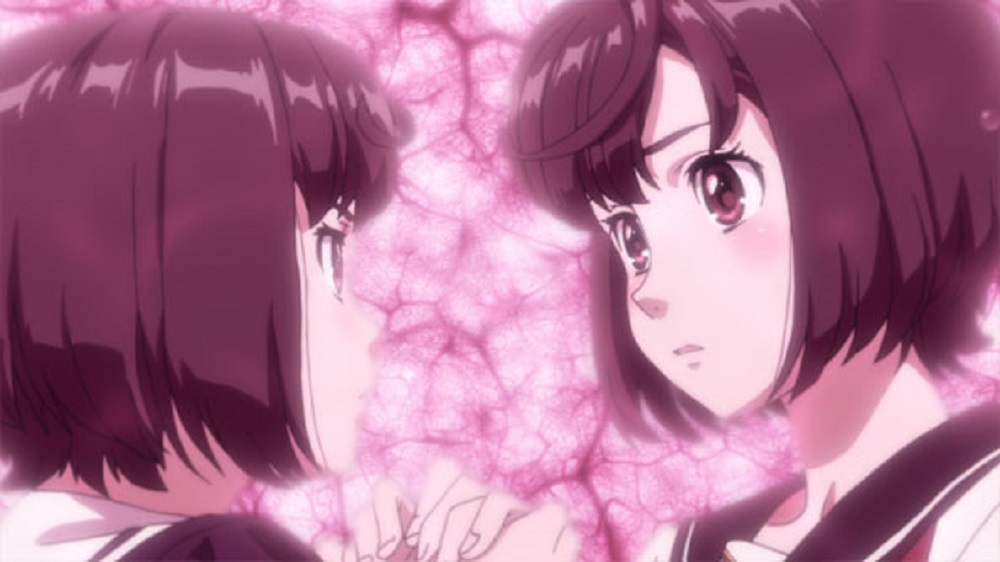 Just to make things a little clear, let’s first establish who’s who. Note that the names Aiko and Aico here set the boundaries between the two parallel characters. “Aiko” is the girl with the artificial body parts and the real brain. And from the beginning of the anime, we are forced to believe that the main character is being portrayed as Aiko. Now “Aico” is the one who possesses the original body which was damaged after the accident and now possesses the artificially created brain which led to the events of the burst in the first place. But this is where the twist comes in. The whole time, the Aiko who we thought possessed the real brain and artificial body was actually “Aico” with the real body and artificial brain.

Think about it – if Aico’s entire body was made artificially, why would she be expected to rest all the time to recover from the accident? So if this holds true, it directly implies that the “Aiko” at the facility possesses the real brain and the completely artificial body. So just to clear things out once more, both the girls have been made out of artificial body parts and the only difference between them is that Aico, the protagonist, actually possesses the real body which has been slightly modified with artificial elements just to help her recover. 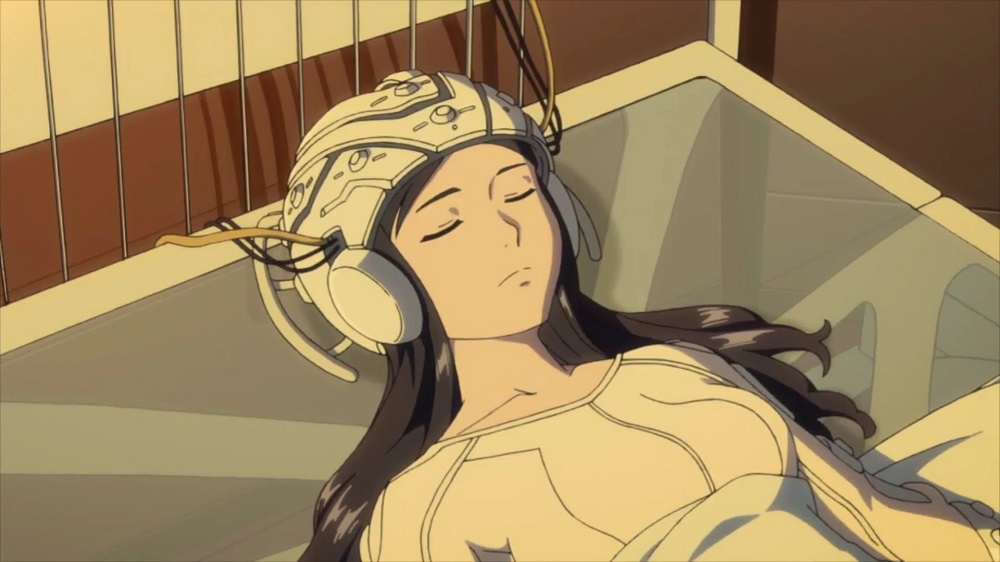 Now let’s go back to some of the flashbacks that show Yuzuha’s father’s memories. During a skiing trip, Yuzuha was buried under a thick pile of snow after an avalanche hit their location. This did not really kill Yuzuha but left her in a deep state of coma. In the flashback, she seems to be around 12 years old and in the present events of the anime, the card that rests on her hospital bed says that she is 18. So it has been quite some time since she has been in this state. Desperate to fix this, Dr. Izasu, her father, turns to Dr. Yura for help. Though he tries hard to make a replica of his daughter, he just seems to fail every single time.

So just like how Aiko was previously replicated using nanomachines, Dr. Izasu creates clones of his own daughter and connects them to the real body of his daughter through a “dream connect”. He hopes that this way he will somehow be able to transfer his daughter’s consciousness into one of the replicated bodies. This is when Aiko shows up in half-dead state just like Yuzuha and surprisingly, Dr. Yura successfully manages to place her artificial brain in her original yet modified body. But it’s this event that causes “The Burst” in the first place.

Dr. Izasu completely flips after finding out that Yura was able to finally pull it off but assuming that he died from the burst, Dr. Izasu is forced to move on. But later, Izasu finds out that Yura is actually alive in the artificial body of a teenage boy named Yuya Kanazaki. Izusu then desperately tries to hunt down Aico to bring her back so that he can figure out how he can save his own daughter. At this point of time, he does not even care about the Burst and only wants to bring his daughter back to life.

Since Yuzuha’s artificial bodies were merely made out of nanomachines, “The Burst” mitigates right into them and then absorbs them. This infection that spreads inside all of Yuzuha’s bodies sends her in a state of shock and her consciousness is finally “awakened”. But because her father had left all the connections of her brain open to the artificial bodies, even her brain gets sucked into the matter. That’s the reason why she claims that she is lost and has no idea which body she should go to. Only when later Dr. Kurose finally cuts off all of her connections with the artificial bodies, she is finally able to find her way back to her real body and is freed from the matter that had taken over her.

The twists in the last few episodes of the anime are truly brilliant. But the only thing that makes them so overwhelming is the way they are revealed in a short span of time. Maybe a season 2 of the anime will be able to pull it off in a better way. To know more about the chances of getting a sequel, you should definitely check out our season 2 preview. And now that we’ve cleared most of your doubts regarding the anime, you might want to re-watch it. I can assure you that you will be able to appreciate it a lot more now.