Sports anime has always been a common theme. Many anime creators and manga writers have taken inspiration from it and created anime shows that revolve around various sports like basketball, baseball, soccer, boxing and of course, car racing. But who would’ve thought that an anime could also be about rollerblading? Well, someone did because the anime ‘Air Gear’ is all about that. Its manga has had more than 13 volumes. A good inspirational anime is all you all need on days when you’re not too high on life and need something more to drag through your day. Sadly, ‘Air Gear’ never really does that; it confuses with its genre. What starts off as a sports anime, soon turns into typical shounen with an entirely different tone, full of action.

Speaking of action, ‘Air Gear’ has great production value and it really excels with its incredibly clean and smooth animation. Almost all of the enjoyment that the show offers entirely relies on its amazing urban setting that is very pleasing to the eyes and also to the ears. The smooth techno tracks make the action scenes even more exciting and ‘Air Gear’ convincingly portrays what it wants to through its action. But it is a very well known fact that a high production value can never make up for a bad story. In this case, the storyline is excruciatingly painful. It’s fun to see how the anime unfolds at the beginning with fast-paced races; however, it later becomes a forced attempt to distinguish itself from other shounen anime.

It becomes clear that the anime is striving to be overly ambitious, which is still fine; but things go all mumble jumble when the whole basic premise takes a toss and the only interesting thing that remains is its DBZ styled battles. With an entirely new storyline, almost midway through the season, the anime starts to abruptly introduce new characters and each of these characters now bring in their own backgrounds and stories. At one point of time, the anime has so much going on that it becomes really hard to bring any kind of closure and thus, all of it ends with nothing but even more disappointment.

Overall, though I did have so many problems with the show, I do understand the sentiments of the creators. To be extraordinary and to create an anime that breaks the stereotypes of its genre, one has to risk everything and that’s what the creators of ‘Air Gear’ did. The fact that they were not too successful with their ambitions is a very different story, but one must appreciate that they tried. The animation and music are almost close to perfect and that’s something no one can complain about. I still believe that the anime holds a lot of potential and if given a second chance, it can actually prove to be the groundbreaking series that it was set out to be in the first place.

Air Gear Season 2 Release Date: When will it premiere?

‘Air Gear’ season 1 released on April 5, 2006 and came to an end on September 27, 2006. Rumors about the second season have been making rounds all over the internet ever since the first season came to an end. Many even assume that the two OVAs that were made right after the first season are actually continuations of it, but that isn’t the case. The OVAs have actually been adopted from some volumes of the manga that come around much later; so calling them sequels wouldn’t be fair. By now, it’s been so long since the first season of the anime came out, and many fans are starting to drop the hopes of getting a new season.

Now as far as the manga is concerned, the author has published 37 volumes, out of which only 12 have been covered in the first season of the anime. And when it comes to the OVAs, they only cover volumes 16, 23 and 24. So clearly, there is quite a lot of source material left for the anime to cover. But it’s the sales of the show that is a matter of concern because the overall sales include DVDs, merchandise and even online streaming, and after adding all of that up, the figures aren’t too good. So at this point of time, it seems like the chances of getting a new season are almost negligible. At this point Air Gear Season 2 release date of 2021 or 2022 seems like a distant dream.

In the first adaptation, the studio actually drifted a little from the story of the manga; so they might consider a remake that is more loyal to the source material. But even that seems very less likely now, after so many years. We will update this section as soon as we learn more.

The English Dub of ‘Air Gear’ is available on Funimation.

A new technology of futuristic skating has come into the picture, which is known as Air Treks or AT. While this technology has taken the whole world by storm, the government has imposed certain safety restrictions on these that does not allow them to surpass a certain speed. But there exists a community of adrenaline junkies known as the “Storm Riders”, who have a found a way to tamper the device and make it reach its full potential. ATs are now not only used for traveling, but also for underground battles and are also the symbol of pride for many who wish to dominate the streets.

In this crazy era, there lives a middle school student named Itsuki Minami, who is very well known for engaging in street fights. His only motive in life is to break through all things that are holding him back from achieving greatness and along with his friends, Kazuma Mikura and Onigiri, he is willing to get past any obstacle that stands in his way. One fine day, he discovers a pair of Air Treks in his own home and that’s the moment when his destiny starts to align with his goal of reaching great heights. 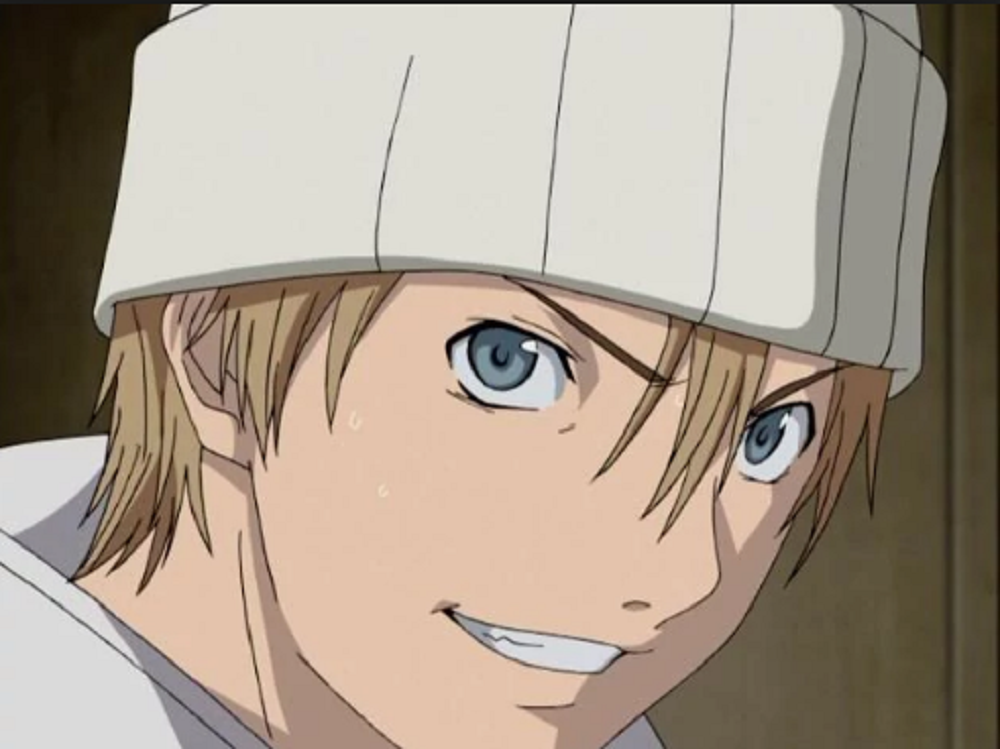 Kazuma Mikura, also known as Kazu, is Itsuki’s best friend. He is second in command of the Air Trek team Kogarasumaru and lives with his elder sister because his parents are overseas. He is an average height teenager who has blond hair and blue eyes. Over his spiky blond hair, he usually sports a grey colored beanie that matches the color of his grey pull-over. The beanie always stays on, except for the times when he gets very, very serious. His good looks and his cool introverted personality have gained him a lot of fans online from all over the world.

Kazuma is very hardworking and always remains loyal to his friends. But he is also very insecure deep inside and these insecurities come from the fact that Itsuki has always overshadowed him with his natural talents. They are best friends now, but back in the day when they were kids, Itsuki would often bully him. It’s because of this that Kazuma does not hold himself in great regard and often comes off as this timid, insecure kid. 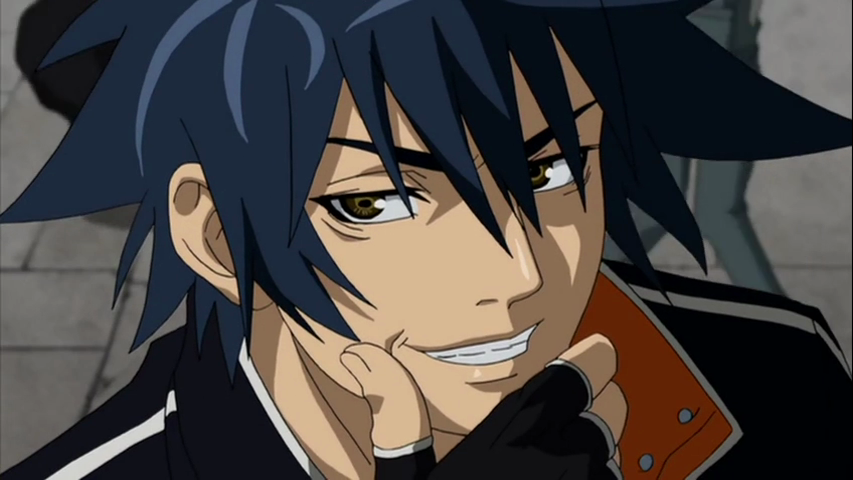 Itsuki, nicknamed as Ikki, is the main protagonist of the anime. Even before the events of the anime, Itsuki has lead many school gangs and it’s his experience with these gangs that later reflects on his iconic Air Trek Team Kogarasumaru. He is a 15-year-old with an average built and height. He has brownish red eyes and messy purple hair that also serves as a nest for a crow. Ikki is known for being upbeat and eccentric at all times. His energy is very contagious and even motivates his team members to reach their own full potential.

Itsuki does not think twice before taking a decision and can often be very rash to the people around him. His fighting style is unpredictable, reckless and spontaneous, which is completely the opposite to that of his best friend Kazu. Ikki is more or less of a genius when it comes to Air Trekking and not even a minute goes by when he’s not thinking about it. His passion and commitment towards the sport are often envied by the ones around him, especially his sisters. He has the ability to think way beyond anyone else and foresee events way ahead in the future. This allows him to always have an edge over his opponents during battles. 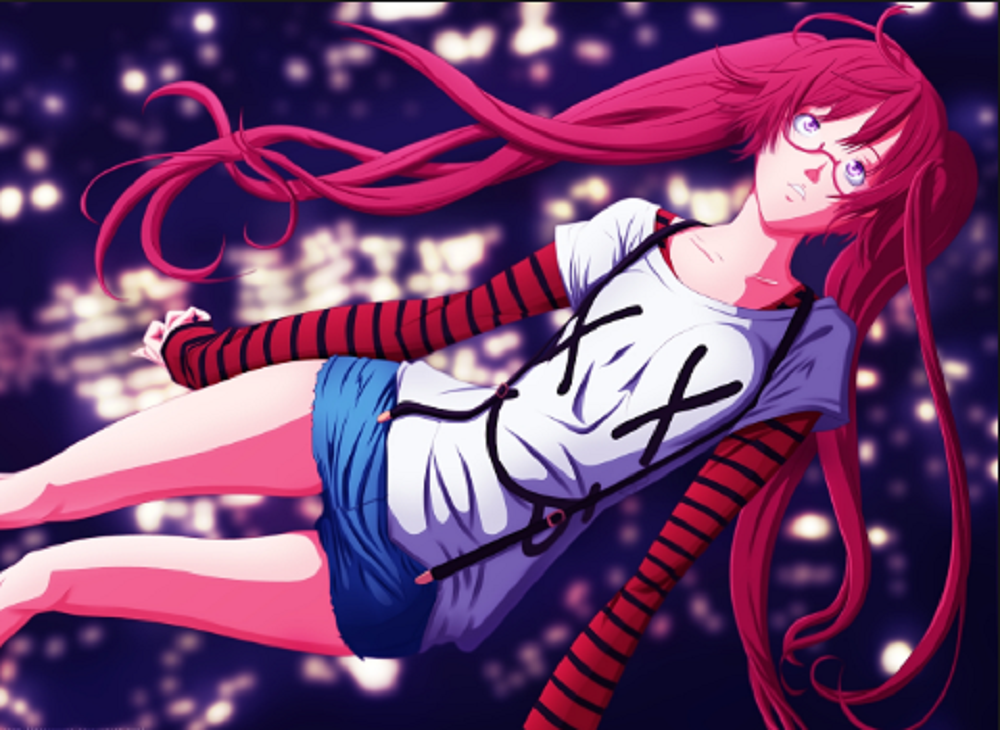 Ringo is the female protagonist of the show, who has known Ikki since childhood. She is a young teenage girl with reddish purple hair that goes down all the way till her waist. She often ties her hair into two long twin tails with a short fringe on her forehead. At the beginning of the series, she is seen with glasses on almost all the time but later, she stops wearing them. She is one of the smartest students of her school and consistently works hard to keep her grades up. She is also very friendly with everyone and tries to help her friends whenever she can. She only gets violent when any of her team members (especially Ikki) displays any kinds of perverted antics.