Alex Radcliffe From Below Deck Mediterranean: Everything We Know 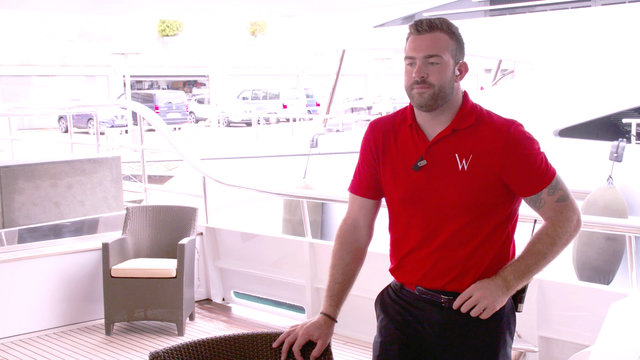 ‘Below Deck Mediterranean’ follows the same format as the original ‘Below Deck’ series, it’s just that it is set in some of the most wondrous European locations, on the most luxurious yachts. Following the crew members who live and work aboard the yacht, each episode shows the different set of complications and issues that arise when new passengers come aboard, and they have to tend to them all the while managing their own personal issues. The show highlights the lives and jobs of the crew members, and this season, one of the newest edition to the ‘Below Deck’ family is Alex Radcliffe.

Alex Radcliffe: Where Is He From?

Like a couple of the other cast members, Alex Radcliffe is American. Born and raised in Massachusetts, he had a tough life growing up, because of which he developed a strong work ethic, one which we can clearly see in the series. His flirty nature is evident as well, but as he is never one to be disrespectful or crude or make others feel uncomfortable, he quickly became a fan-favorite. Of course, his good looks and stature, 6’3″ and 225 lbs, helps in that area as well.

I can get use to this

Alex actually found his way into the world of yachting and boats via a friend who worked in the industry. When he saw the adventurous lifestyle, the gorgeous destinations, and the potential that yachting had to offer, he fell in love and began pursuing a career in it. Initially, he employed a “fake it ’til you make it” philosophy, but because of his determination and quick leaning abilities, he worked his way up the ladder quite quickly.

Promise this is not a thirst trap but Tune-in: Monday at 9/8c on Bravo @bravotv @belowdeckbravo

Although he landed the role on ‘Below Deck Mediterranean’ as a Deckhand, he has his eyes on becoming a Captain one day and running his own ship. According to his bio on Bravo TV, the shameless flirt and stubborn man works as hard as he plays. And, we think that if he continues to do so, if he continues to be himself while keeping his head on straight, he would be able to achieve his dreams soon enough.

There’s 2 types of crew members. 1 who sucks up to the bosun so you don’t have to work and another that get stuck doing dishes. Swipe to peep. Ohh and go watch tonight at 9pm ET To see me get dirty at the club and regret most of my decisions #belowdeckmed @bravotv

We previously mentioned that Alex had a tough life growing up, and that’s because he only had his mother around. He was raised by a single mother in a blue-collar community, so he learned the importance of hard work at an early age. Thankfully, he hasn’t let that or his ambition to come in the way of his personality, and thus, he remains to be a humorous and good man. He’s still close with his mother, and their family has expanded over time to become one big group.

Disrespecting another city at a time with the fam

As for his relationship status, although he seems to be single, on the series, he was seen getting quite close with Bugsy Drake, the second stew. As soon as she had arrived, it was evident that Alex had a bit of a crush on her, blushing whenever she was around. And then, they took their flirting to the next level, sitting closeby during the casual dinner followed by them getting cozy in the jacuzzi. However, during Alex’s recent interview on The Daily Dish podcast, he said that being a reality star has “helped him with the ladies” and changed his love life. So, we’re not too sure if the boatmance lasted for long or not.

Anyone have any good pick up lines for me to attempt to flirt with the new South African stew @bugsydrake ? #belowdeckmed @bravotv