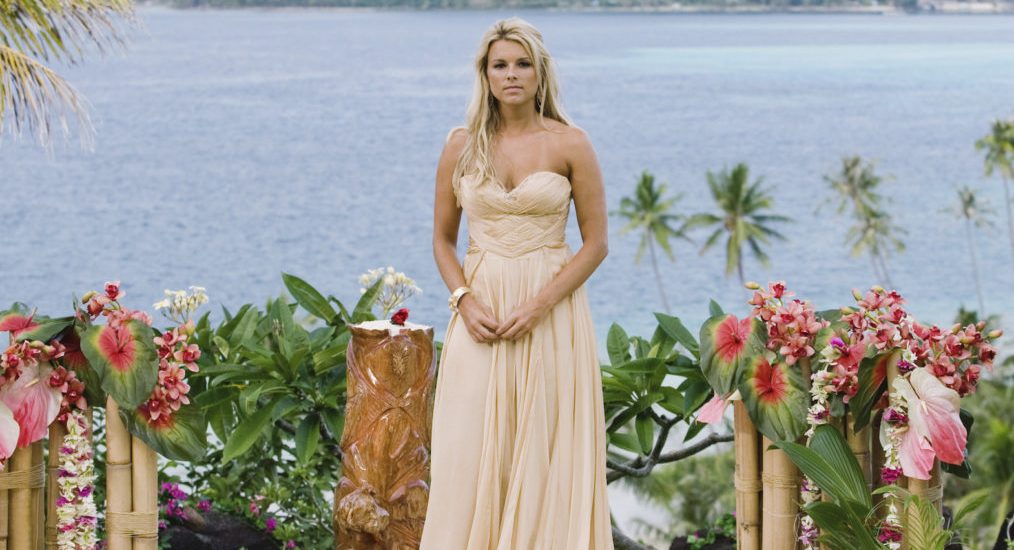 The leading lady of ABC’s ‘The Bachelorette’ Season 6, Ali Fedotowsky found love on the show, in Roberto Martinez. She gave him the final rose and they got engaged. However, it didn’t last. They suffered a devastating break-up, though it was a relationship mutually ended. Ali and Roberto realized that, in spite of their love for each other, they were not well matched and clashed altogether too much.

The Bachelorette couple broke up 18 months after the season ended and each moved on with their lives. But where is Ali Fedotowsky now? Is she married? Did she finally found “the one”? Who is he? We’ll answer that in the section below. Read on!

For a while, Ali wasn’t ready to date other people after her break up. She wasn’t ready to jump into anything that serious again so soon after. She did admit later to having hooked up with Frank Neuschaefer – another contestant from the show and a serious contender for her heart. Frank had left the show voluntarily because he was still in love with his ex-girlfriend and Ali was left heartbroken. But the casual date after her breakup with Roberto was just that – casual. It didn’t amount to anything more.

Then through some common friends in the entertainment industry, Ali did meet the love of her life – her now-husband – Kevin Manno, who is an on-air host and radio DJ.

3 years married (on 3/3) ❤️ Feels like 30 😂 Ha! I love you so freakin much @kevinmanno and I’m so grateful you chose me to be your wife. ❤️ #BPP #samebrain #3yearsmarried #3yearanniversary #mannoandwifeo #lovenotes #grateful #myhusbandismybestfriend #weddinganniversary

For a while, though, they were just friends. Romance blossomed later. They dated for a few years before announcing their engagement in 2015. They originally had planned to get married a month before the arrival of their daughter but had to push the Mexico wedding due to Zika virus concerns. Their baby daughter served as flower girl at their wedding in early 2017. Then soon after, they also welcomed a baby boy in their life.

Soaking up every last second in Maui 🌴☀️🌴 My missing tooth is super obvious in this photo and I don’t even care. I’m just so so so happy right now.

Judging by her Instagram posts, all of which look wholesome and light, Ali’s home life is happy and secure. She, along with her husband Kevin, has taken up gardening during the pandemic. They both do struggle with balancing work and the raising of two little kids, sometimes. Like how Ali has to distract the kids and make it look like Kevin’s not home so that the babies won’t disturb him while he records his radio show from home.

Well, creativity is very important while managing young kids! This adorable family does seem very much up to the task though.

Where is Ali Fedotowsky Today?

All is not as perfect as it seems on social media, though. Ali has had her fair share of health concerns. Her old femur injury (while kickboxing back in 2011) notwithstanding, Ali has also overcome cancer and pregnancy loss.

In January 2020, she was diagnosed with basal cell carcinoma (the most common type of skin cancer). She almost fainted in her dermatologist’s office upon hearing the C word. But the good news was that they had detected it quite early and when detected early, it’s easily treatable. The cancer was in a mole on her stomach which she got removed surgically and fully recovered.

GET YOUR SKIN CHECKED. A couple weeks ago I found out I have skin cancer. When my dermatologist used the c-word, I just about fainted in his office. Thankfully, the type of skin cancer I have is rarely fatal and really never fatal when you catch it early. It’s called Basal cell carcinoma. Swipe to the third pic to see what my mole looked like before I got the biopsy done (so you know what to look for). It’s on the left side of my body. The scar right above my belly button is from when I had cells/skin that may be cancerous removed six months ago. Needless to say, i’m never exposing my stomach to sun without sunscreen again! . . Basal cell carcinoma is super common. The most common skin cancer. You probably know someone who has it. So it’s no big deal. But what IS a big deal is not treating it and treating it early. That is why going to a dermatologist and getting your skin checked every year is SO important (I now go every 3/6 months). The VERY first thing I did when I got diagnosed was text my family on a group text urging them all to get their skin checked. So I’m doing the same for all of you, my extended family, right here and right now. I’m lucky it wasn’t melanoma. And I’m lucky that I caught it early. Moving forward I plan on making it a priority of mine to use the best natural products on my skin and be rigorous about applying sunscreen and reminding all of you to do the same! I love you guys! Take care of yourselves! #skincancer #skincancerawareness #skincancerprevention #basalcellcarcinoma #basalcell #skincheck

A few weeks ago, Ali also announced on Instagram that she had recently suffered a miscarriage and needed some time to heal and process the profound loss. She also gave a shoutout to anyone who was also going through or had been through pregnancy loss, saying “I see you, I feel you” and that they are not alone. In the moving post, Ali also said that whatever they were feeling was valid and everyone had the right to process this loss in their own way.

I am 1 in 4. I don’t really know what to say here. I’m sitting in my car, using talk to text & I’m just gonna speak from my heart. I had a miscarriage recently (I’m at the OBGYN right now for a follow up). I’m not sharing this bc I feel sorry for myself or I want others to tell me they feel sorry for me. I don’t feel sorry for myself. I feel sad for what could’ve been. Sad for the baby that was growing inside me. Sad because it’s sad. I want to share this because I think it’s important. I’m so uplifted and encouraged by the way I’m seeing social media change. Change from being a place where everyone shares the highlights of their life and now being a place where people share the good & the bad – the smiles & the tears. ❤️ It’s such a long story of how it all happened. I’m not ready to fully talk about it and I honestly don’t know if I ever will be. (CONTENT WARNING – this may be difficult to read. Especially for those who have experienced a pregnancy loss) It happened early one morning when I had intense cramping. I passed the gestational sac – which was the size of a plum – in my bedroom. I was in complete shock when it happened. I sat and stared at it for hours – not able to fully comprehend what happened. And the utter exhaustion that took over my body in the few days after that was almost debilitating. Actually, being completely exhausted for weeks was one of the first signs that I was pregnant. 🌸 I’m writing this post to let others know who have experienced pregnancy loss know that I see you & feel you. We all go through different emotions & process the loss differently. I know that my loss is not the same as someone who’s had a stillbirth or lost a baby at 20 weeks. Or someone who has been trying to conceive for years. But what I found so shocking about my experience is that it affected me so much harder than I could have imagined. So know that if you’re going or have gone through this, your feelings are valid – whatever they may be❤️ With love, Ali #miscarriage #

We just love how strong Ali’s personality is that she was able to bounce back from such hardships and seems to continue to live her life to the fullest, with her loving husband and beautiful kids.

Read More: Where is Jake Pavelka Now? Is He Married?