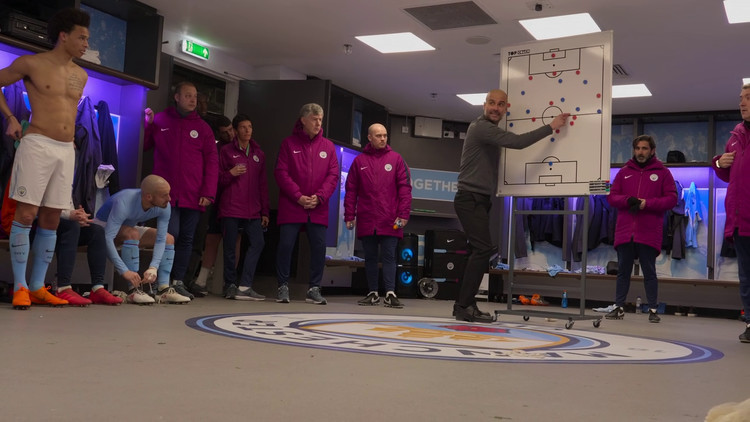 ‘All Or Nothing: Manchester City’ is a documentary series about the Manchester-based soccer club, which has emerged in the second decade of the 21st century as one of the best clubs in Europe. In the docu-series, the focus is on their 2017/18 campaign and see how they prepare for their matches under the strict and watchful eyes of manager Pep Guardiola. The series is produced and distributed by Amazon, and gives never-before-seen inside footage of the workings of an English Premier League club.

All Or Nothing: Manchester City Cast: Who is in it?

The main cast of ‘All Or Nothing: Manchester City’ are the players and managers of the club. The club is managed by Pep Guardiola, who earlier achieved unprecedented success with Barcelona in the Spanish League (La Liga) and the UEFA Champions League. After Barcelona, he moved on to Bayern Munich and again success followed. Seeing his love affair with trophies, which never seems to end, Manchester City decided to give him the responsibility of managing their team. And naturally, success soon followed with the team winning the 2017/18 EPL. The other important members of the cast are surely the players of Manchester City like Sergio Aguero, Benjamin Mendy, Kevin de Bruyne, and others. Notably, the famous British actor Ben Kingsley serves as the narrator of the series.

All Or Nothing: Manchester City Plot: What is it about?

‘All Or Nothing: Manchester City’ details the workings of the Manchester-based club during the 2017-18 season. We see how Pep Guardiola prepares his team for every match; we get a tour of the stadium and the training facilities of the club. The infrastructure which Manchester City offers not only to the senior team but to every level of the club is simply world-class.

In the first episode of season 1, we see Guardiola giving the team talk before a match. Here we find him discussing his soccer philosophy and how he approaches each situation as manager. What we understand through this episode is how the manager has to be cautious about every single thing that is happening at the club, as even the slightest of problems can have a hugely negative impact on the field.

The series then focuses on a derby match Manchester City has to play with their bitter city-rivals Manchester United. Historically, Manchester United has been the stronger club of Manchester. They were not only a feared club in the city but all over England. Out of the 26 years of existence of the English Premier League, United have won the title 13 times. However, things changed after United’s long-time manager Alex Ferguson retired and City emerged to be the much stronger club among the two since 2013.

While City prepare to take on Manchester United, they also have to concentrate on the European competition, the UEFA Champions League, the most prestigious competition in soccer at the club level. Amidst all the numerous games, Guardiola has to deal with the injuries of his players, rearrange the team accordingly, set up the tactics, and keep the players motivated.

What this series essentially does is that it tries to capture one of the best soccer clubs in the world in their busiest moments during the season and tries to understand how a multi-billion dollar industry called soccer operates in today’s world. The series is surely eye-opening and insightful for soccer enthusiasts. ‘All Or Nothing: Manchester City’ is not devoid of controversies. Sky Sports, which covers the Premier League, did not like the idea of them allowing Amazon access to places where they were never allowed before. Reportedly, City charged Amazon £10 million pounds for the inside access. Trouble also ensued at Old Trafford, the home ground of their rivals Manchester United, when the United officials did not allow Amazon permission to film inside their dressing rooms.

All Or Nothing: Manchester City Season 2 Release Date: When will it premiere?

‘All Or Nothing: Manchester City’ season 1 premiered on August 17, 2018. The series is a completely fresh look at a soccer club, done in a way in which the fans have always wanted to see their stars while they are inside the dressing room, how they discuss what to do on the field, how they deal with various problems at the club, and so on. The series became a huge hit among soccer fans. Even though there’s no official news on the next season of the show, there are several approaches that the showmakers can take.

They can focus on another big soccer club like Bayern Munich, Real Madrid, or Barcelona. This will give viewers pan-European access into the inner workings of their favorite soccer clubs. Or they can also focus on another season of Manchester City. As of now, nothing is confirmed yet. But if we do receive information about ‘All or Nothing: Manchester City’ season 2 release date, then we will update you in this section.

All Or Nothing: Manchester City Trailer:

Since there’s no news about ‘All Or Nothing: Manchester City’ season 2, you can watch the trailer for season 1 and refresh your memories. Have a look and decide for yourself whether you want to be a part of such an incredible roller-coaster ride: