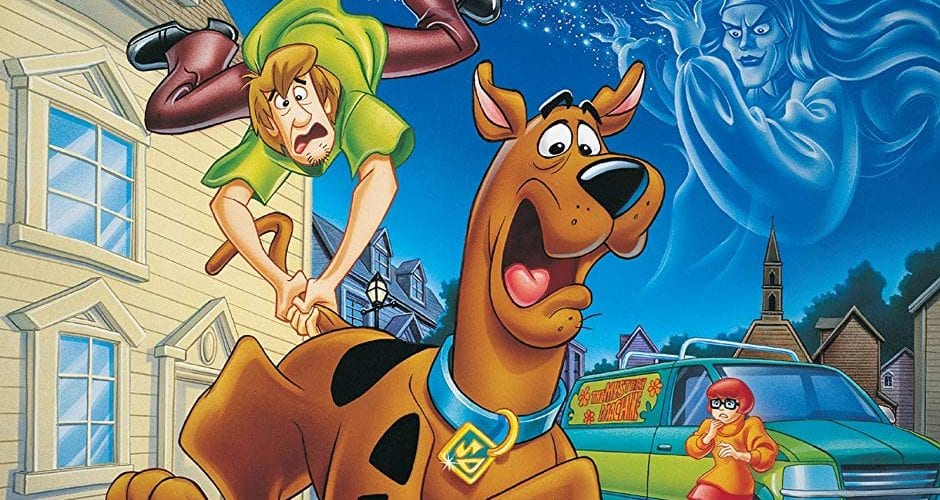 Scooby Doo is one of the most recognizable television characters of all time. I practically grew up with Hanna-Barbara’s animated Great Dane, and the stories surrounding his close friends and him as they went about solving mysteries had me head over heels when I was a kid. The animation was beautifully hand-drawn, the plots and their go-abouts were both imaginative and intriguing, and though I don’t find the television show very funny today, I used to think it was downright hilarious in my younger years.A

My father used to buy these animated films for me back then, in the form of VCDs and video cassettes, which was how I got introduced to many of the earlier Scooby Doo films. These were easily better in terms of both production value and creative merits when compared to the incarnations the Mystery Incorporated had had on TV. None of the movies have been great, exactly, but they’ve all been entertaining, which is pretty much the only thing the title character to these ever claimed he would offer. With that said, here is the list of Scooby Doo movies, ranked from worst to best. You can watch several of these Scooby Doo movies on Netflix, Hulu, or Amazon Prime. 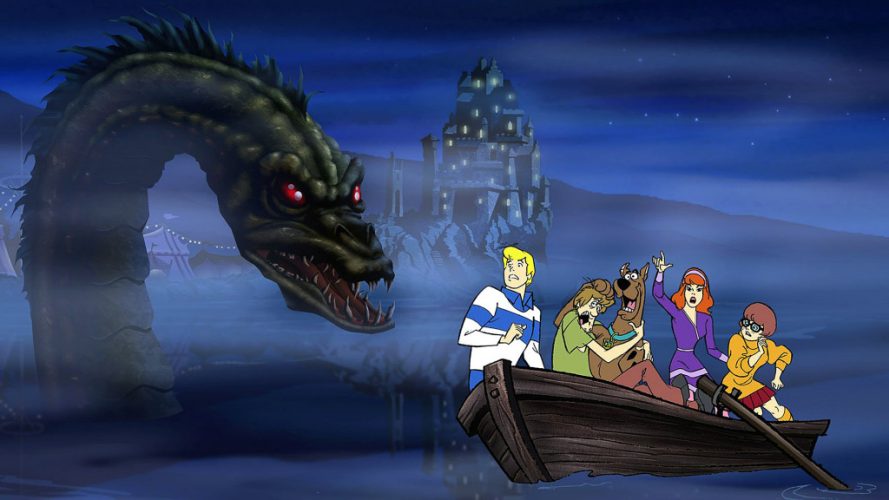 The basic premise for a lot of Scooby Doo films is a fair, a cultural event wherein masked individuals can be plenty, and everyone is exposed. Of course, the show being targeted to kids, played these aspects very safely. This time, they’re off to Scotland for the Highland games, where they stay in Daphne’s ancestral home (she’s part-Scottish, apparently). They meet a couple interesting characters, most of them rehashed versions of popular Scooby Doo villains, in at least the traits they possess, and several stories and opinions about the Loch Ness monster begin to pop up. The usual happenings with a Scooby Doo film take place here as well, from when a menacing Nessie begins to wreak havoc. 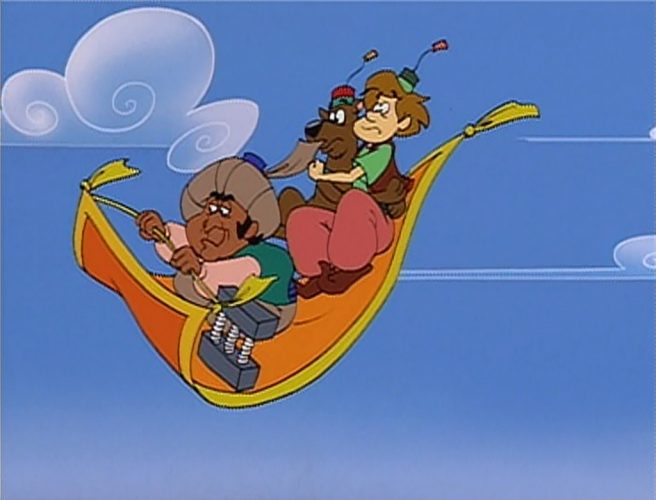 I don’t consider ‘Scooby Doo in Arabian Nights’ to be better than any film on this list, but I’ve placed it here because its one of the few that have a different kind of story to offer. Scoob and Shaggy are the main players here, and they tell two mini-stories within the time-frame of the picture (to a Caliph) – one about a gender-reversed Aladdin and another a re-imagined telling of the tale of Sinbad the Sailor. A lot of animated features (especially the made-for-TV ones) presenting popular children’s characters often included plots wherein they’re involved in popular fairy tales or ancient stories, which can be interesting, like this one is, though the beloved central characters of the franchise are sadly underused. 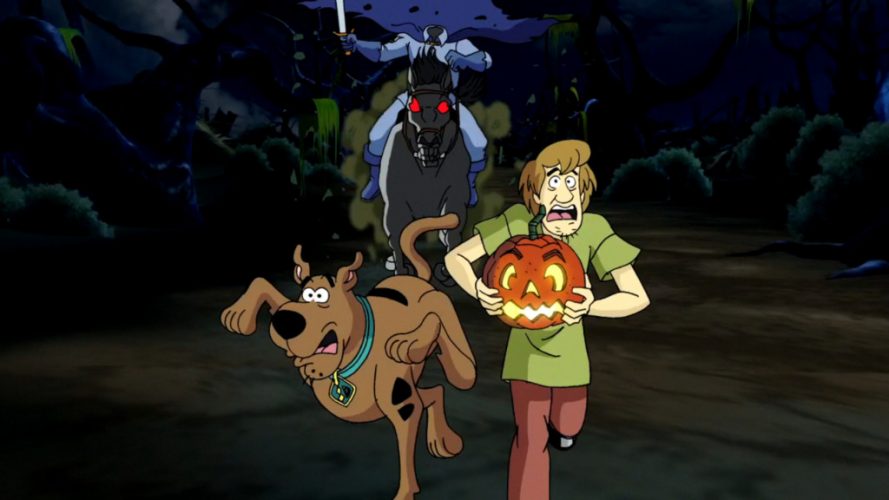 This film came out after a couple of failed attempts at making the cartoon dog and his crew interesting for the younger generation, and was well-received. I think its success over the other films that preceded (and followed) it is that the story here is reminiscent of the early ghost tales that the franchise had been famous for. The limelight shines over Shaggy and Scooby Doo once again, as they hunt for the Goblin King in order to save the lives of their friends, who happen to be in danger. The witches and supernatural elements in here are all real, which is how this film stands out from the others. It’s a musical too, with surprising guest voices from stars like Lauren Bacall and Jay Leno! 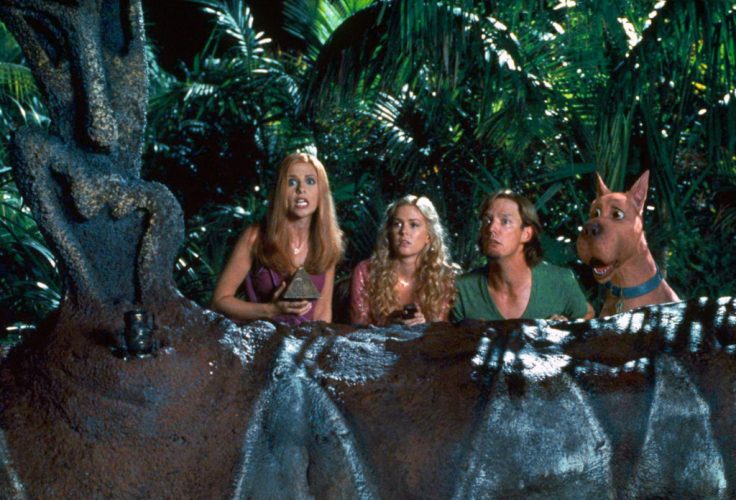 This film is weird. Way too many people have called it a bad live-action animated adaptation of the beloved characters, but hey, I enjoy it quite a bit! I don’t know if its nostalgia in play, since the film was part of some of the first I had ever seen, or can remember having seen when I was younger. I say it’s weird because the plot involves way more than just guessing who the man under the mask is (the conclusion is pretty stupid, I’ll admit) – there’s this surreal bit in the middle involving souls and character switching and stuff. I don’t know about whether it’s good, but it’s a great ride for sure! 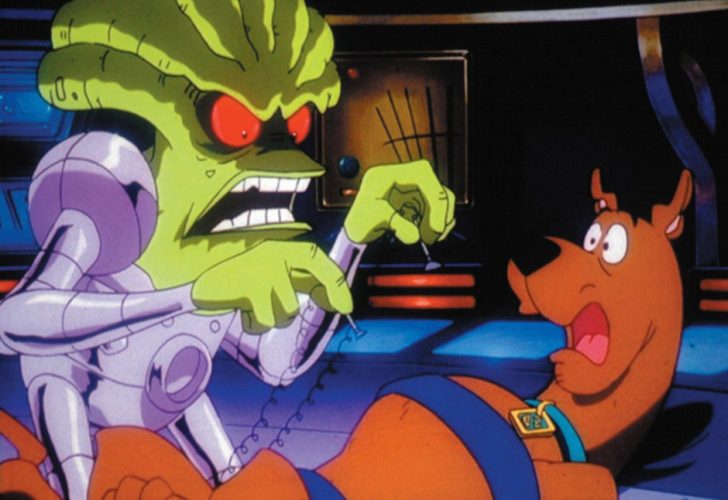 This one’s a classic! A very by-the-formula Scooby Doo film, ‘Alien Invaders’ is more about how nutty it is than actually delivering an intriguing plot, which I ended up liking, funnily enough. Starting off with a very familiar Mystery Incorporated van breakdown (I mean, how else are they gonna explore new places if it wasn’t for that van malfunctioning in the most inconvenient of locations every time?), the gang ends up in the desert where the main topic of discussion happens to be alien sightings. As usual, they meet strange people (and Shaggy and Scooby fall in love), and you have a predictable mystery that’s sweet and nostalgic for a long-time fan. 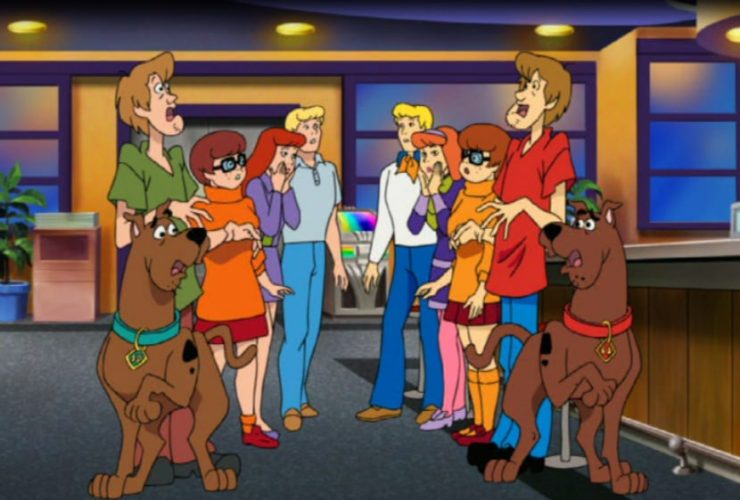 The title sounds like a hard attempt by people working to please a generation they aren’t quite sure about. The film is pretty good though, I’ve got to say. I caught it very early on Cartoon Network, if memory serves me right, and rewatched it again recently. This time, the gang takes their investigation to the cyberspace, helping out with a game that’s been reprogrammed by an anonymous individual. This one’s fun primarily because of how it uses its basic plot to bring out interesting alternatives to the Scooby Doo formula. The characters meet their own cyber-selves, for example, leading to a different kind of conflict. Clicking for Scooby Snacks is also something new, and the mystery is nicely handled, with a neat reveal. 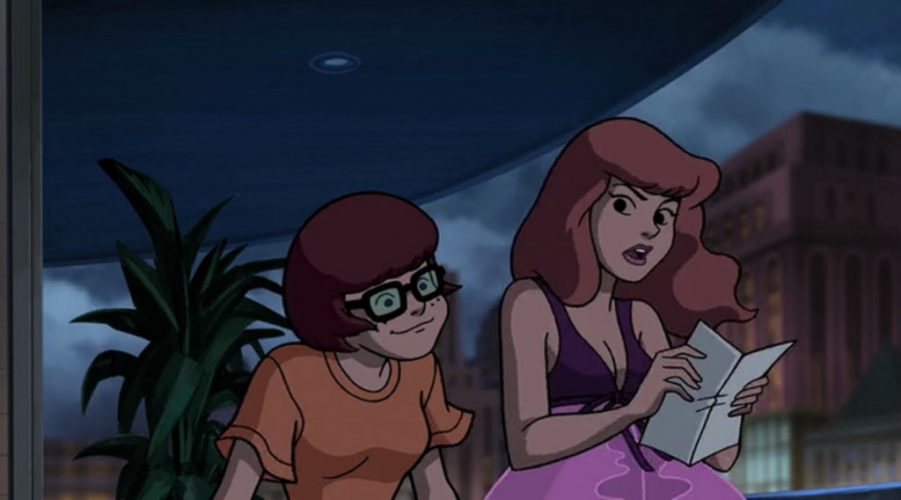 By far the best thing about this film is its animation. It’s a gorgeous looking film, with freshly outlined and energetic characters and backgrounds. The story is good too, about a mysterious ‘phantom’ who haunts a talent show. By this point, a lot of Scooby Doo films (some sources say the franchise has the highest number of direct-to-video features) had involved monsters that were real, which initially started off as an attempt to sidestep from the repeated happenings of earlier films, though this got old quickly. The film has its heart deep in the sub-plots that had made the show great, including the Fred-Daphne romance and Velma’s bookish intelligence. All-in-all, its a great callback to what made Scooby Doo the icon he is. 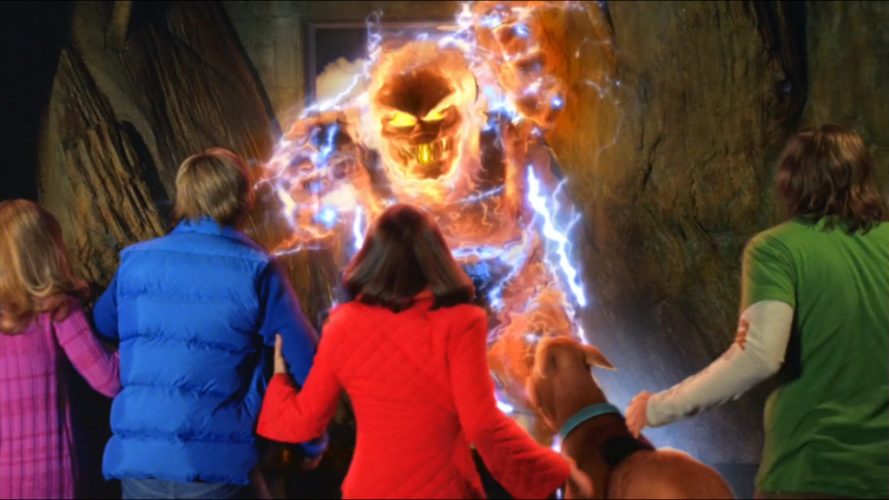 Though this film is widely panned, I hold it high because I couldn’t guess who the villain was. The story is interesting, and structured a lot differently in both pace and style from other Scooby Doo movies. The sequel in the live-action retelling of the cartoon, this one deals with monsters coming to life in a museum, causing the gang to go on a wild adventure that involves spooky mansions, traps, and, well, more monsters! The animation is quite disappointing here, if I’m being honest, but there’s a lot of scenes that I find memorable, most probably because I considered this to be my favorite film of all time when I saw it aged 4. It is still fun, more so than the original film, though it is also, very noticeably, weird. 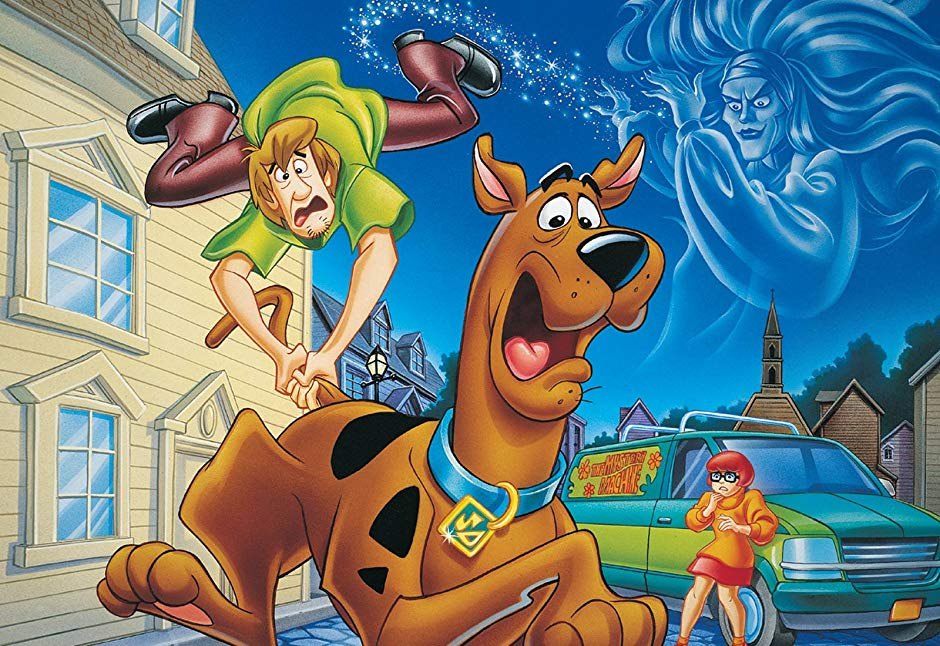 I watched this one over and over again so many times as a kid I’ve lost count. Velma is the star here, taking on a romantic role that gives her prominence, because the person she’s fallen for is a famous author… who can’t really be trusted. There are these odd happenings going on in his village which has a ghostly past associated with it, one which is connected to his family in more ways than one. I guessed out the villain here early on, but I still think this is genuinely one of the better made Scooby Doo movies, because it takes interesting filmmaking risks, like introducing closed atmospheres to advance a sense of creepiness. Let’s also not forget the fact that this film has some fun songs and is super involving with its comedy and spooks. 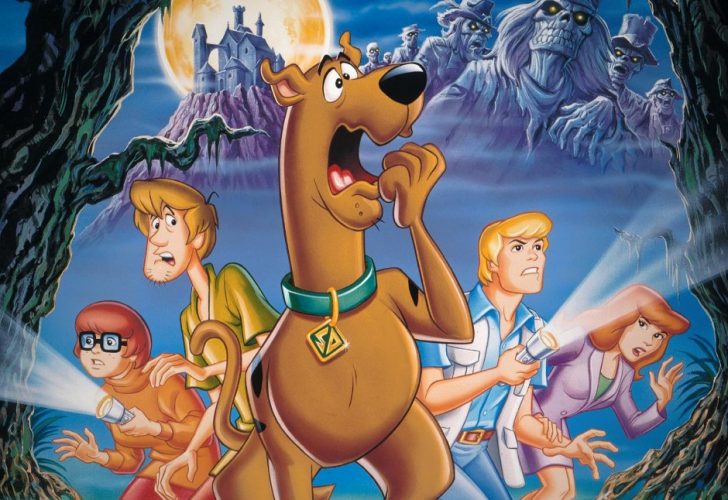 The period from the late ’90s to the early 2000s was when the film adaptations of Scooby Doo were at their creative high, and this is the epitome of the direct-to-video ones. The characters are a lot more mature, and the writing is pretty clever. The film starts off with the gang coming together after temporarily breaking up to indulge in individual interests, to get the scoop for a TV show run by Fred and Daphne regarding ghosts and ghouls. Their journey takes them to a haunted house owned by a dead pirate and further to an island full of zombies. The film is self-aware and hilarious, which is its biggest plus. It takes the tropes of the cartoon and follows them in smart ways, wherein we know of their existence in the film’s world, though the way they’re addressed is in total subtlety. The poster to this film is considered iconic in pop culture (related to Scoob) today.