Will There be an Alpha House Season 3? 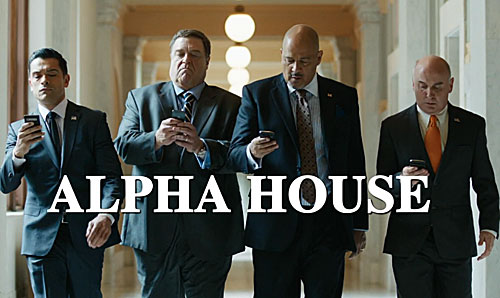 Alpha House is a political comedy series that first premiered on April 19, 2013, on Amazon. The show is created and written by Garry Trudeau, the cartoonist behind Doonesbury. The series is inspired closely by the real-life Democrats, who shared row house in Capitol Hill, Washington D.C. The real-life inspirations for the plot are Representative George Miller (D-Calif.) who has recently retired and sold the house and his two longtime roommates, Richard J. Durbin and Sens. Charles E. Schumer, who have found new accommodations. Though, in the show, the real-life Democrats are portrayed as Republicans.

Political humor on television or anywhere else as a matter of statement, can be quite risky. There is a very thin line that separates political satire from a potential controversy. Reality talk shows such as ‘Last Week Tonight With John Oliver’, ‘Patriot Act with Hasan Minhaj’, and ‘Late Show With Stephen Colbert’, have attracted media’s attention several times with their witty opinions, and smartly placed political puns and comebacks.

The entertainment industry has also given us some brilliant examples of political series as well as movies. While shows like ‘House of Cards‘, ‘Homeland‘, and ‘The Good Wife‘ are leading names in the genre of political drama, shows like ‘Full Frontal with Samantha Bee’, ‘Veep‘, and the newly launched ‘The Politician’ are some names that feature the same drama but, in a humorous way. Alpha House is one such show that lies somewhere in between both the genres. The show portrays all the real struggles of politics, but at the same time, keep the tonality light-hearted and satirical.

The show premieres by making it clear to the audience that re-election is just around the corner and there is absolutely no time to breathe. The three lawmakers, Gil John Biggs, a Senator from North Carolina, Robert Bettencourt, a Senator from Pennsylvania and Louis Laffer, a Senator from Nevada are struggling hard to keep up with all the office pressure and at the same time, looking for a new roommate (as their previous one was arrested). Just on the cue, Andy Guzman, a senator from Florida and a candidate for president, takes the spot of the empty fourth roommate.

The show keeps the right balance between wry humor and satire, and the seriousness of the theme. The senators are seen making trips to Afghanistan for congressional delegations, where Louis gets badly injured. While Gil and his wife prepare for his upcoming debates, Andy prepares to deliver rebuttal after the State of the Union. Robert, on the other hand, is facing a hard time with the ethical committee. While all the senators are seen facing their own battles, by the end of Alpha House season 1, we witness Louis winning the Nevada primary against all odds while Robert prepares for a face-off in Pennsylvania debate.

Alpha House season 2 takes off from where the last season ends. While the political chronicles continued, the audience this time saw more realistic issues related to women, slaves, race and different forms of developments being addressed. Interestingly, the makers did not allow these serious topics to overpower the element of fun in the show. By the end of the season, we find Gil meeting with the presidential campaign advisor for his upcoming endeavors while Robert analyzing over his job.

Alpha House season 1 premiered on April 19, 2013, on Amazon. The show was one of the first few series of Amazon and hence, had a lot of expectations. Though Amazon does not reveal its viewership data, it is safe to say that the expectations were rightly matched and the show acclaimed positive feedback from the audiences and critics. John Goodman, who played the character of Gil Biggs, received Satellite Award for Best Actor.

After the positive response of the first season, the show was renewed for another season. Alpha House season 2 premiered on Amazon on October 24, 2014 but sadly, could not gather viewers and lost its fan base. In one of the interviews, Roy Price, head of Amazon Studios said “‘Alpha House’ is not a current show”. Later, Jonathan Alter, producer of the show, to clear all the doubts surrounding Alpha House’s return tweeted “Unfortunately not. Fun while it lasted”

To summarize, Alpha House season 3 has been cancelled

Alpha House Cast: Who’s in it?

Check out the trailer of Alpha House season 2 below: