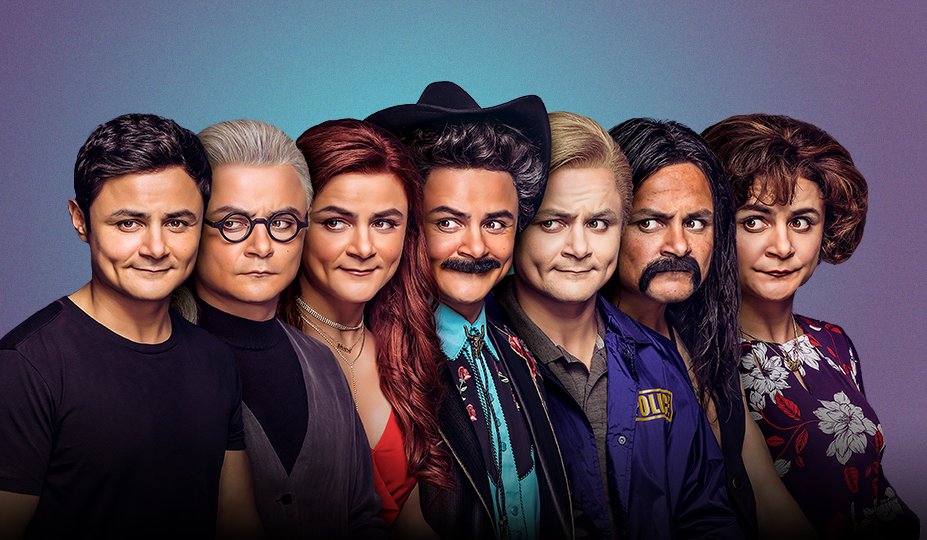 Variety shows are among the oldest forms of shows, having been around since the early days of experimentation with television programs. Variety shows usually contain elements ranging from magic shows, musical performances, acrobatics, comedy sketches and sometimes interviews. Such shows first started when bands moved from town to town and performed in front of an audience. It later made its way to the stage and finally moved on to radio and television.

The earliest examples of this form of entertainment are from the 1930s. Records can be found of two such shows hosted by Helen Haynes and Harriet Lee. However, no footage of these two shows has been retrieved. One of the most popular series, when television was still in its nascent stages, was the ‘The Ed Sullivan Show’. It ran from 1948 to 1971 and helped introduce major artists like The Beatles, Elvis Presley, and The Rolling Stones to the American audience. One addition to this rich history of variety shows is Comedy Central’s ‘Alternatino With Arturo Castro’. The show serves as a Latino millennial’s take on the present American society.

Alternatino With Arturo Castro Cast: Who is in it?

In the tradition of variety shows, there is one host who leads the charge, and the show is named after him. Likewise, Arturo Castro is the host and the only constant cast member in this series. Castro is a Guatemalan actor who stepped into television from the theatre at the age of 17. He has been a host since then, beginning with hosting a fundraiser where numerous Latin musical sensations were present. Further, he got himself a variety show in his native country before finally making his way to the United States. Castro became a household name after playing the character Jaime in Comedy Central’s hit series ‘Broad City’. Castro also played the character of the drug lord David Rodriguez in the hit Netflix series ‘Narcos‘.

Castro is expected to be back for season 2, if and when it happens.

Alternatino With Arturo Castro Plot: What is it about?

There is no particular plot in ‘Alternatino With Arturo Castro’ since it is a variety sketch show. It mainly focuses on various comedy sketches in which Castro takes part as a Latino character. It must be mentioned here that most of the sketch or variety shows that have aired till date have been centered around the culture predominant among white Americans. It is important to bring other cultures into the mainstream, and thus shows like ‘Alternatino With Arturo Castro’ are highly relevant in today’s world. Regarding his inspiration behind the show, Castro said, “There’s such a toxic narrative that I wanted to provide an alternative version to that. I didn’t see myself identified onscreen, and I think there’s a lot of ignorance.” Further adding, “The narrative that’s out there about Latinos is so politicized. When somebody in politics says “Mexicans,” they don’t mean Mexicans: they mean anybody Latino, it’s all the same.”

Throughout the show, we see Castro in various situations playing around 45 characters in different sketches. He falls into absurdist situations and tries to haul himself out from the same. What this series aims to achieve is to make people aware that when stripped off one’s prejudices, basic human emotions are almost the same all around the globe.

In the first episode of season 1, we see Castro dating a woman who is an embodiment of the crude stereotypes associated with Latinos. In another episode of the first season, we see him as a part of a group of migrants who want to travel to the United States in search of a better life. However, one of them says that he is going to America to exploit their job market and live on welfare. One of his fellow immigrants corrects him, saying that something like this is logically impossible.

Season 2 is expected to have similar comedy sketches that question the preconceived notions many people have about Latinos.

Alternatino With Arturo Castro Season 2 Release Date: When will it premiere?

‘Alternatino With Arturo Castro’ Season 1 premiered on Comedy Central on June 18, 2019. With the help of comedy sketches, host Arturo Castro brought deeply political and social truths in the first season. Viewers who think that Latinos need more representation in the American mainstream and that there is a deep-set prejudice among the general populace regarding them really appreciated the show.

As far as the next season goes, there’s a good chance that Comedy Central will greenlight a second season. However, no such announcement has been released by the network yet. If the show does get renewed, our best guess is that ‘Alternatino With Arturo Castro’ Season 2 release date can be sometime in June, 2020.