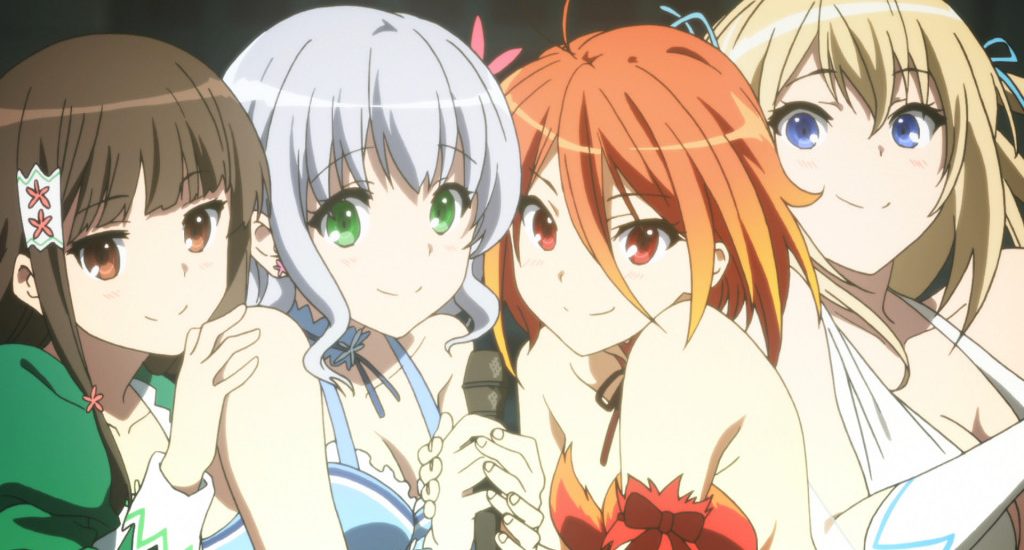 ‘Amagi Brilliant Park’, also known as ‘Amagi Buririanto Pāku’, is a Japanese shoujo light novel series written by the popular Japanese author Shoji Gatoh and illustrated by Yuka Nakajima. Shoji Gatoh is best known for his work on the popular ‘Full Metal Panic!’ series, which also managed to gather quite a reputation for itself. A total of eight volumes have been published till date by Fujimi Shobo since February 20, 2013 under the ‘Fujimi Fantasia Bunko’ imprint. Fujimi Shobo also published three other manga adaptations for the series in collaboration with Kudokawa.

An anime series was also developed to support the manga and the original source material and was aired in Japan between the 6th of September and the 25th of December, 2014. The anime was developed by Kyoto Animation. A spin-off novel series titled ‘Amagi Brilliant Park: Maple Summoner’ began circulating on the 18th of October, 2014, also produced by Fujimi Fantasia Bunko. It ran for a total of 3 volumes and was put on an indefinite hold in February, 2015.

The artwork for the manga is provided by Kimitake Yoshioka and began circulating on the 8th of February, 2014. It was published by Fujimi Shobo in their popular shōnen manga magazine ‘Monthly Dragon Age’ and has been compiled in two tankōbon volumes as of October 8th, 2014. A second manga was published by Fujimi Shobo that followed the 4-panel format with artworks being provided by Kōji Azuma, titled ‘Amagi Brilliant Park? Fumo’. It was first released in June, 2014 on the same magazine as the first one — ‘Monthly Dragon Age’. The third manga adaptation is being carried out by Kudokawa and is titled ‘Amagi Brilliant Park the animation’. The artwork has been done by ‘Ami Hakui’ with the content being provided by ‘AmaBri Restoration Committee’ (also known as ‘Amaburi Saisei Iinkai’ in Japan). The serialization will begin shortly on Kudokawa’s popular website, ‘ComicWalker’.

Amagi Brilliant Park Season 2 Release Date: When Will it Premiere?

‘Amagi Brilliant Park’ season 1 premiered on October 7, 2014 and ended its run on December 25, 2014 after airing a total of 12 episodes. The popular anime is directed by Yasuhiro Takemoto and produced by Kyoto Animation. An original OVA was also produced that came bundled with the 7th volume of the DVD and the Blu-ray series in addition to 7 other short episodes, titled ‘Amagi Brilliant Park: Wakuwaku Mini Theater – Rakugaki Backstage’. This makes this edition one of the most sought after volumes for fans of the series.

There have been no official statements from the producers about a new season in development or any further plans of it. In addition, the first season of the anime is quite fulfilling in itself and manages to complete the story arc. Also, it seems the anime was developed to support the original source material and boost its sales, which it managed to achieve. Therefore, the chances of receiving a new season are extremely low. However, given the popularity of the series, season 2 can never be completely written off. Our best guess is that in the unlikely scenario of the anime getting renewed,‘Amagi Brilliant Park’ season 2 release date could be sometime in 2020 or 2021. We will update this section as soon as we hear more.

You can stream the anime Crunchyroll and Amazon with its original Japanese audio and English subtitles.

The main plot of ‘Amagi Brilliant Park’ revolves around the character of Seiya Kanie. Voiced by Kōki Uchiyama in the Japanese version and by Adam Gibbs in the English version, Seiya is one of those characters that you’ll fall in love with instantly. If ‘love’ is too strong a word for you, then try ‘admiration’ and ‘respect’ instead, but whichever way you look at it, you can’t help but feel a direct connection with the character.

It is important to note here that even though Seiya goes through some changes and evolves through the course of the storyline, his righteousness and sense of justice remains on point, making him the quintessential protagonist for any anime. This is one aspect that is slowly being forgotten by most mainstream releases nowadays with writers ditching the holistic ‘good person’ approach for a more believable character that is grounded in reality. Personally speaking, I really missed the whole approach of the main character being the good guy and therefore, this becomes a bit of an issue for me. However, this is important in the development of the storyline as you will see when Isuzu refers to him as a child that any parent would be proud to have. It not only plays a critical role in making the audiences connect with the protagonist of the story but also enables the plot to develop, making it an invaluable asset to the production team.

With that being said, let’s delve into the actual plot itself. Seiya, being the good looking wholehearted boy he is, is the center of attraction of a lot of his female friends. This does not bother him that much until he is forced by Isuzu at gunpoint to go on a date with her! Isuzu is a mysterious stoic who never speaks of her emotions preferring to hide them under her featureless expressions. However, she does have a sensitive personality that craves for attention and a sense of belonging, albeit at a very deeper level. Her real identity is still unclear to Seiya but he decides to play along. They both end up at Amagi Brilliant Park, which is an amusement park containing various attractions, although most of them seem average at best. Seiya finds the place intriguing and the lack of guest alluring but he doesn’t pay much heed and proceeds to tour the place.

Isuzu then introduces Seiya to the various attractions, most of which are run-down and don’t really function as intended. As a result, the park has been performing badly, which explains the lack of guests. After their ‘date’, Isuzu asks Seiya for his opinion on the park, to which he replies that he is extremely dissatisfied. He proceeds to explain that one must believe in their own dreams themselves in order to make others believe in it. This strikes Isuzu and she is left to ponder over her thoughts. While leaving the park, Isuzu offers Seiya some croquettes as a gesture of thanks. Seiya, who expected them to be just as mundane as the park itself, is surprised, as the croquettes turn out to be extremely delicious. He inquires about the source of the delicious croquettes, after which Isuzu asks him to follow her to the manager of the park.

Seiya follows Isuzu to the management quarters where he notices that the manager resembles a princess of a fairly tale. Amused by the look on Seiya’s, face, she proceeds to introduce herself as Latifah Fullanza, the princess of the magical kingdom of Maple Land. She further explains that all the staff workers presently working in the amusement park are all residents of Maple Land, trying to make their existence work in the human realm. However, business has been terrible lately and if they do not manage to pull in at least 500,000 guests by the end of July 31st that year, the park will be shut down. Seiya, unable to understand the gravity of the situation, stares blankly back at her. Surely, the shutting down of an amusement park in the human realm shouldn’t be an issue for magical dwellers in Maple Land!

Later, Latifah explains the catch: the amusement park is simply a front for harvesting positive energy from park visitors. When visitors enjoy the rides at the amusement park, they are able to harvest this energy and use it for their own existence. It is a completely symbiotic relationship wherein the dwellers serve the humans by providing them with a place that entertains them, while sustaining their own needs and demands. However, due to the poor maintenance of the park, visitor rates have dropped steeply and if they do not manage to pull in the required amount of guests during the set time period, their whole dimension will cease to exist.

Both Isuzu and Latifah ask Seiya to help them with the management of the park in exchange for certain magical powers. Seiya, quite intrigued by the challenge, accepts it. They both kiss him on the cheeks, upon which he receives several visions before passing out. He wakes up on his bed the next morning wondering if all the events of the previous night were just a dream. It is at this point he realizes that he can hear the voice of his aunt in his head. Upon further investigation, he discovers that he is not hearing their voices in his head but actually perceiving their thoughts instead. Quite confident now that he has not been tricked and that the events of last night did actually take place, he makes his way to Amagi Brilliant Park along with Isuzu to take care of business.

Seiya Kanie: Seiya is the kind of protagonist who takes the concept of ‘perfection’ to a whole new level. Originally voiced by Kōki Uchiyama in the Japanese adaptation and by Adam Gibbs in the English rendition, he is a brilliant high school student who is lured into Amagi Brilliant Park by Isuzu, who asks him for his help in managing the park. He decides to take up the challenge and proceeds to work with Isuzu in devising ways that boost sales in a last attempt to sustain the entertainment park, which he learns is the source behind Isuzu’s existence.

Isuzu Sento: A royal guard to Maple Land and the manager of Amagi Brilliant Park, Isuzu is forced to lure Seiya into the entertainment park in order to ask for his help in maintaining the same. She explains that the park is their only resort for farming the positive energies from humans, which helps them sustain in their realm; but due to poor sales, there are possibilities of it being shut down altogether. Together with the help of their friends, Isuzu and Seiya proceed to restore the park to its former glory, sustaining Maple Land in the process.