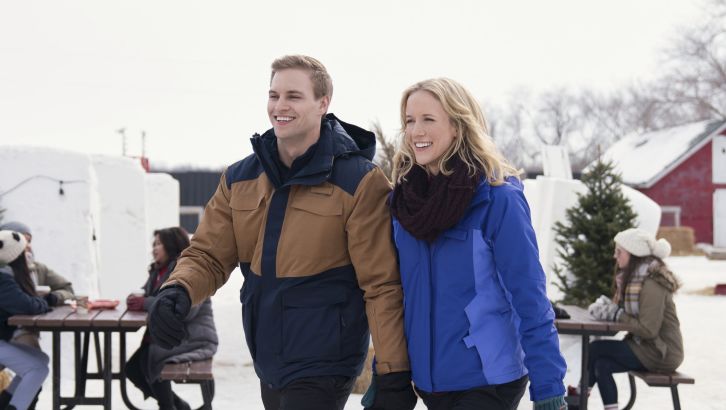 Hallmark is always adding fresh new movies to its oeuvre throughout the year. From their annual run of Christmas movies to the winter-themed series of films released under the broad heading “Winterfest”, Hallmark has always provided its audiences with exciting new stories. The film ‘Amazing Winter Romance’ is another Hallmark release which has been written by Barbara Kymlicka and directed by Jason Bourque. The film looks to be a rather significant addition to the Hallmark canon.

The story of ‘Amazing Winter Romance’ centers around a Chicago-based professional journalist named Julia who decides to leave her life in the city for a while in order to find some inspiration and rejuvenate herself with a visit to her hometown. Here, she comes across her childhood friend Nate and is mesmerized by a structure Nate has built, which is a maze made completely out of ice. Julia has been tasked by her editor to write something on the charm of small towns, and she decides to write about this maze and how it is attracting visitors to their town. As she goes about with her work, Nate constantly keeps reminding Julia of all the joys of living in a small town. As she spends more and more time in the town, Julia begins to realize that her friendship with Nate is evolving into something deeper.

Most winter-themed films where ice and snow dominate the landscape are filmed in Canada. Many Canadian cities remain covered in snow for a prolonged period of time, and thus it becomes quite easy to film such winter-themed movies there. The makers of ‘Amazing Winter Romance’ have also taken a similar approach. Read on to find out more about the movie’s cast and filming locations:

The central character of the film, Julia, is portrayed by Jessy Schram. A television veteran, Schram has acted in numerous TV movies over the years. Her resume also boasts of important roles in the shows ‘Veronica Mars‘, ‘Life’, ‘Crash’, ‘Life Resort’, ‘Mad Men’, ‘Falling Skies’, ‘The Lizzie Borden Chronicles’, ‘Nashville‘, and ‘Chicago Med‘.

Marshall Williams plays Nate, the creator of the maze and Julia’s eventual love interest. Williams’ most prominent role have been Spencer Porter in ‘Glee’ and Sam Tremblay in ‘When Hope Calls’.

Other important characters in the film are played by Zoe Fish, Melissa Marie Elias, Paul Magel, and Nancy Sorel.

Where Was Amazing Winter Romance Filmed?

Filming for most Hallmark or other TV movies are mostly done in indoor locations or in Los Angeles, or in certain parts of Canada where exciting tax incentives are in place for film production companies. ‘Amazing Winter Romance’ has also been filmed in Canada in mainly two locations: Winnipeg and St. Adolphe.

Winnipeg is the capital city of Manitoba, and if we go by the story, one can presume that the part of the film when Julia is still in the big city of Chicago and is waiting to go home has been filmed in Winnipeg. In case you are planning to visit the city, here’s photo of its skyline.

The small and beautiful town of St. Adolphe has served as Julia’s hometown in this film. Interestingly enough, the snow maze which is mentioned in the film is actually a structure that in St. Adolphe. The maze plays a rather important role in the story and also indirectly makes Julia and Nate come close to each other.

A Maze in Corn is actually the largest snow maze in the world, clocking in at a whopping 2,789.114 square metres. In March 2019, it found its way into the Guinness Book Of World Records. Located just 30 minutes south of Winnipeg, A Maze in Corn was a corn maze before it was turned into a snow maze.

Some *A-MAZE-ING* news for the snow maze in St. Adolphe, Manitoba. Clint Masse says the results are in and Guinness World Records have declared it the largest snow maze in the world. @ctvwinnipeg pic.twitter.com/TdqzOdsiZp