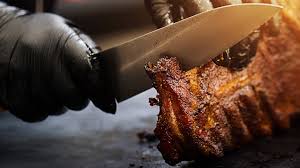 It appears Netflix cannot get enough of its in-house barbeque season. Following the success of ‘Chef’s Table: BBQ‘, the streamer launched yet another smoky show, ‘American Barbeque Showdown’. However, in the latter, the stakes get multiplied. As the name suggests, it is the ultimate showdown among some of the best backyard smokers and barbeque-rs as they compete for the title of American Barbecue Champion.

‘American Barbeque Showdown’ season 1 premiered on September 18, 2020, on Netflix. It consisted of eight episodes. Noting the consistent success of culinary shows on the streamer, we are highly optimistic that this particular series will see another season at least. Moreover, the competition has a personality of its own — thanks to its roster of well-recognized judges. No wonder, its first iteration was received with great applause from fans. That being said, we expect to hear news on a renewal soon. If Netflix gives the new edition a go-ahead within this year, we can expect ‘American Barbeque Showdown’ season 2 to premiere sometime in Fall 2021.

American Barbeque Showdown Season 2 Cast: Who Can be in it?

Season 1 sees an impressive judging duo, comprising Kevin Bludso and Melissa Cookston. While Bludso is the founder of Bludso’s BBQ (known as one of the best BBQ joints in Los Angeles), Cookston happens to be a seven-time world barbeque champion and owner of Memphis BBQ Company. Joining the judges as the hosts are Rutledge Wood (‘Floor Is Lava‘) and Lyric Lewis (‘A.P. Bio‘).

The judging panel assigns the contestants with a challenge in each of the episodes. The tasks are designed to test the barbecue skills of the BBQ-ers in the toughest way possible. Some of the challenges featured in season 1 include the introduction of unique meats and using old-school techniques, among others. In season 2, we expect both Kevin Bludso and Melissa Cookston to resume their judging duties. Wood and Lewis should also return as the hosts.

Alongside the judges, the eight contestants introduced in season 1 are pretty impressive as well. We have James “Boatright” (an expert in baby back ribs and backyard cooking) from St. Louis, Missouri; Tina Cannon (a French-trained chef) from Georgia; Georgia Chasen (an experimental cook who is super-organized) from Rockville, Maryland; and Michael Collins (who had prepared all kinds of exotic meats) from Fayetteville, North Carolina. Joining this eclectic bunch is Sylvie Curry from Ramona, California; James “Grubbs” from Blairsville, Georgia; Rasheed Philips from Atlanta, Georgia; and Ashley Thompson from Benson, North Carolina.

After a series of eliminations, the final two to make it to the finale are Tina and Rasheed. And the one who is crowned as the American Barbecue Champion is Tina Cannon! Season 2 will see a fresh bunch of BBQ experts, battling it out to impress the judges and finally be crowned as the winner.

Read More: Where Is The American Barbecue Showdown Filmed?