Amy Schumer Learns to Cook Season 3: Everything We Know 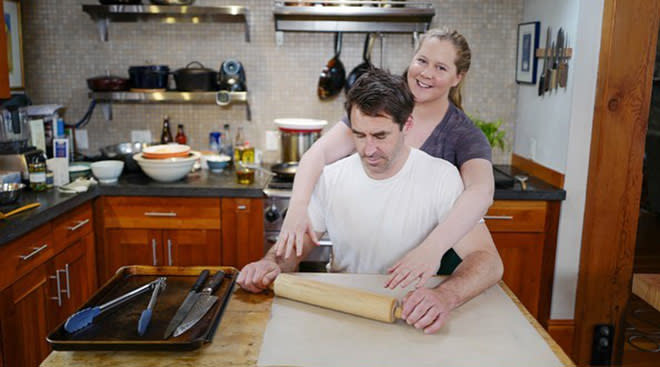 Not everyone is perfect — not even our favorite celebrities. And in these quarantine times, everyone is working on their imperfections. Social media is packed with clips of celebrities trying to improve their skills, especially in the kitchen. Noting the trend, Food Network decided to launch a series that embraces this very concept. Titled ‘Amy Schumer Learns to Cook’, the culinary show follows Schumer as she experiments with different recipes, mainly cooked by her chef husband. Well, after a short run, the show wrapped up with its first season and was quickly renewed for a 2nd edition. So does this mean we will get the third edition as well? Read on!

‘Amy Schumer Learns to Cook’ season 2 premiered on August 17, 2020, at 10 pm ET/ 9 pm CT on Food Network. It ended with its 4th episode on September 7, 2020. The remotely-filmed show is definitely a comforting watch during the grueling lockdown times. And with the COVID-19 virus not going anywhere anytime soon, we guess a third season is on the way! If renewed soon, we can expect ‘Amy Schumer Learns to Cook’ season 3 to release sometime in early 2021.

Needless to say, Amy Schumer stars as the primary host in this food docuseries. Primarily known for the sketch comedy show, ‘Inside Amy Schumer,’ the stand-up comedian and actress made her film debut in ‘Trainwreck’, after which she went on to star in multiple flicks and tv series. She is joined by her husband, Chris Fischer — an established chef and farmer. In the episodes, we also meet the couple’s son, his nanny Jane, and their dog. In between, Amy also calls up her celebrity friends to get some cooking tips. We see some cameos from her acquaintances like Adele and Jennifer Lawrence. Season 3 will see Schumer and her fam making a comeback, accompanied by surprise guest celebs.

What Can Amy Schumer Learns to Cook Season 3 be About?

‘Amy Schumer Learns to Cook’ is a series that has been completely filmed at home by Schumer and her husband, Chris Fischer. The show primarily documents the star’s culinary adventures while being stuck indoors due to the global quarantine imposed because of the COVID-19 pandemic. Schumer pairs up with her professional chef spouse to whip up a number of dishes.

While her partner, who happens to be a specialist in farm-to-table cuisines, does most of the cooking, Amy lends a helping hand. But she is extremely good at making cocktails and also lends a few quips to annoy the hell out of her husband. Chris leads the cooking by curating comfort dishes from farm-fresh ingredients. Amy handles the mixology sessions. Apart from relatable themes like brunch, fridge clean up, pasta night, and tacos, the show also focuses on two other important issues — domestic violence and humane working conditions for farmworkers.

In the episodes, we see the pair making poached eggs, bacon, homemade latkes, old-fashioneds, fried rice, wings, and peanut butter cup cookies. Alongside the recipes, we also get some exclusive behind-the-scenes glimpses at how the family is coping with the health crisis. Season 3 will continue to follow Amy and her fam as they embark on multiple new culinary adventures.