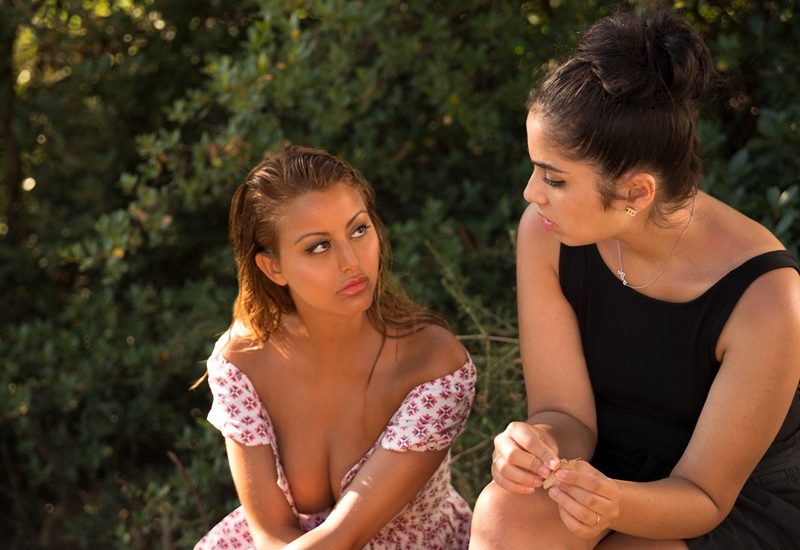 ‘An Easy Girl,’ by French director Rebecca Zlotowski, stars Zahia Dehar and Mina Farid as cousins that spend some time together during summer vacations. The film belongs to the comedy genre, but it is also so much more than just a bunch of laughs. The premise of the story is that 22-year old Sofia visits her 16-year old cousin, Naïma, in Cannes for the latter’s holiday. What unfolds are more nuanced portrayals of adulthood, idolization, and what defines a person.

The month is June. Naïma has just turned 16, and after a small celebration with her school friends, she goes home and wonders how she will spend her vacations. She has the option of an internship at the hotel where her mother works, but she is still unsure about it. She finds out her cousin Sofia will be visiting her and is very excited to see her again.

Soon after Sofia’s arrival, the siblings go out and they end up meeting the very rich Andrès and Philippe in a club. The girls are invited back to their boat. Sofia continues to flirt with Andres, and the pair go to his room to spend the night together. The next day, after having breakfast together, the girls head over to a luxury boutique and buy some jewelry items on Andrès tab.

One of Sofia’s rules is to never text first. After waiting for two days, she finally receives a text from him, inviting the cousins for dinner. The next day, they go on a boat trip to Italy. During this journey, Naïma develops an unlikely friendship with Phillipe, who appreciates her candor and intellect, and treats her with respect.

This trip is important for more reasons than one. Naïma initially construes Sofia’s way of living her life as free and unshackled by people’s opinions. She loves this idea of liberation. Having spent so many days with her cousin, Naïma even seems to idolize her. She gets the same ‘Carpe Diem’ tattoo on her back that Sofia has. The 16-year old also fights with her best friend, Dodo, especially when he accuses Sofia of using her sex appeal to live the high life. She even defends her cousin’s choices when he says that she has no accolades to her name apart from “shaking her butt.”

While Naïma deeply loves her cousin, she, over the course of the movie, realises that much of it is a facade. From wanting to copy her actions to eventually making her own decisions, Naïma realizes what it actually means to step into adulthood.

After the cousins return from their trip to Italy, Andrès accuses them of stealing a precious sextant and has a staff member throw them off-board. While Naïma protests and declares their innocence, Sofia just walks away. She tells her younger cousin that the existence of proof would not change their hosts’ opinions. She asks Naïma to leave her alone for the night and walks away.

Philippe sees Andrès placing the sextant back into its box, and is a little shocked at his friend’s behavior. He tells him that the girls were not going to stick around forever and that this little act was unnecessary. Andrès is nonchalant and says that it was not a big deal. Philippe is not okay with this explanation, but he goes back to his room.

Looking to patch things up with Dodo, Naïma proceeds to talk to him at the club where he is sitting with other acquaintances, and he initially dismisses her presence. She keeps waiting there, and he eventually gives in. The two spend the whole night frolicking on the streets of Cannes, just like old times. However, it is still evident that she looks up to her elder cousin and when he asks if they actually stole it, she fervently defends her.

The next day, when Naïma returns to her apartment, she finds that Sofia has left without a trace. She did not even get a chance to say goodbye to her elder cousin. She then goes to meet Phillipe one last time to confess her feelings. She tells him that what she feels for him is not love but that she wanted to meet him one last time to say goodbye. He tells her that he knows that she is not a thief and that she holds her values close to her heart, which is important. The boat is then ready to depart.

In September, Naïma receives an email from Sofia stating that she has relocated to London and is very happy. Naïma herself now works as a chef at the hotel, and in the closing scene, she sells all the expensive items the cousins had bought together. The only thing she keeps is the pink Chanel bag Sofia had gifted her for her birthday.

The movie is a light-hearted narrative that encompasses some heavy themes. It uses an almost voyeuristic approach to showcase Naïma’s emotional journey to the audience. After all, she is a bystander, witnessing Sofia’s adulthood and how she tackles emotional, social, sexual, and financial situations. This coming of age story is quite different in that the protagonist of the film has quite a passive role herself. Naïma is just a mere observer of Sofia’s antics. However, the subtlety of the characters should not be mistaken for a monotonous plot.

Moreover, the casting is exceptional. Zahia Dehar, infamous for a sex scandal herself, perfectly embodies Sofia’s kind yet strong personality. She grasps her character’s motivations very well, and this is also reflected in her work. Mina Farid plays the smart but naive character of Naïma brilliantly too. In fact, their combination as cousins does wonders for the film! Never once do they make a plot point feel forced or unnecessary.

Furthermore, the director has done a great job of exploring more delicate topics of sexuality and adulthood through a delicate lens. For a character like Sofia to be this sexually liberated on screen without an undertone of objectification is just remarkable storytelling. She isn’t just another piece of eye candy. She is a girl doing what she needs to do in order to get by, and she is definitely written in the same manner. The audience is free to form their own opinion about a character that otherwise would definitely have a few negative connotations attached to her.

‘An Easy Girl’ is a refreshing update to the genre and does a great job of showing Naïma’s evolving thought process. From wanting to emulate her cousin all the time to eventually following her own path, she does grow a lot during this vacation. The film will catch your attention with Sofia’s sensuality, but it will keep you invested for Naïma’s allegories.

Read More: Where Was An Easy Girl Filmed?