‘Impractical Jokers‘ is undoubtedly one of the most successful prank series of all times, if the not the most. It premiered in 2011, taking the world by storm. And it continues to rule over television even nearly a decade later with over 8 seasons and 200 episodes to its credit. The series is not exactly sophisticated, but it certainly knows a thing or two about good ol’ humour. You cannot help but laugh uncontrollably despite all its silly antics, and perhaps, because of it. So, whether you love it or hate it, you cannot deny how outrageously hilarious it is.

The series follows “The Tenderloins”, a comedy troupe created by four lifelong friends turned pranksters – Joe Gatto, James Murray, Brian Quinn and Sal Vulcano. The challenges each member to pull ridiculous pranks on strangers while being filmed on a hidden camera. It is widely praised for the unscripted wit and banter between the Tenderloins as they try to find ways to embarrass each other.

It is obviously too soon to comment on whether or not the four jokers will return with another feature in the future. But given the massive success of the franchise, it definitely remains a possibility. Here’s everything we know.

Will There be a ‘Impractical Jokers: The Movie’ Sequel? 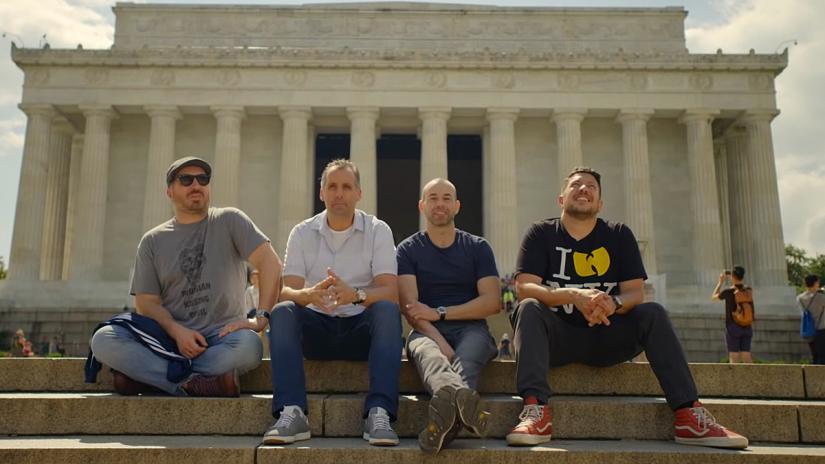 Unlike the original series, ‘Impractical Jokers: The Movie’ does seem somewhat scripted because of the narrative it follows. A humiliating high-school mishap from 1994 takes the Jokers on a road-trip to Miami where they compete with each other in hopes of attending a party thrown by Paula Abdul. As they only receive three invites, they decide to battle it out in the way they know best – through graphic stupidity. But only three of the four can redeem themselves.

The film opens with an almost made-up origin story that takes us back to the ’90s where the Jokers tried to attend a Paula Abdul concert, but eventually ended up wrecking it. In the process however, the genesis of their iconic videotaped dare shtick takes place.

The rest of the film follows their road-trip to Miami as they prepare to attend Abdul’s event. But of course, on their way, as is typical of the show, they candidly challenge each other to prank strangers. Similar to the series, the pranks in the film often are a hit and miss. But it ultimately manages to strike the right balance, despite its flaws.

While the film may not be critically acclaimed, it probably wouldn’t be derided either. Simply because ‘Impractical Jokers: The Movie’ sticks to what it knows best, and reaches what it sets out to do, even if it’s not particularly ambitious. This explains why the early responses to the film have largely been mixed.

Ultimately, whether or not the Tenderloins return to the big screen solely depends on how much the public enjoys their humiliating hijinks. ‘Impractical Jokers’ certainly has a massive fan-following across the world. However, this doesn’t necessarily translate to a good box-office collection as the prank series’ success partly depends on its chosen medium.

After all, watching the Jokers and their antics on cable isn’t the same as paying to watch them on the big screen. For better and for worse. But of course, one can never underestimate the power of a loyal fanbase. Especially if that fanbase is of an ultra-successful franchise like ‘Impractical Jokers’. So I guess, only time will tell. If at all we do get a follow-up ‘Impractical Jokers’, we can hope for it to premiere by 2024.