14 Best Anime Animals of All Time

Animals are an important part of nature and human society. So, it is evident that television series and movies will have some representation of animals. Animals in anime series are quite a staple. They help in forwarding the plot and developing the depth of the characters. They have important screen presence and are sometimes used to give the viewers a certain comical or rather relatable experience. With that said, here’s the list of top anime animals ever. 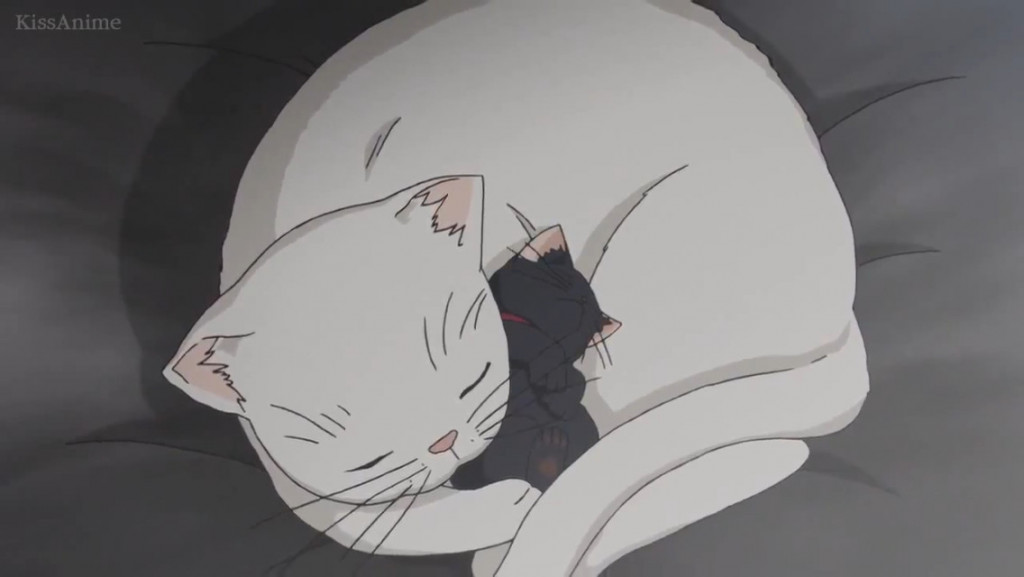 Marshmallow and Kuro are two cute cats from the anime series ‘Suki-tte Ii na yo.’. Animals are an important part of any anime series or movie. Here, Marshmallow and Kuro are quite instrumental to the plot and characters of ‘Suki-tte Ii na yo.’. They are quite useful in showing the depth of a character or rather what is the personality of a character. For instance, they show how caring and committed Yamato can be if given the chance. Marshmallow is Mei’s cat while Kuro is the pet kitten of Yamato. The couple grows much closer while caring for these to pets. 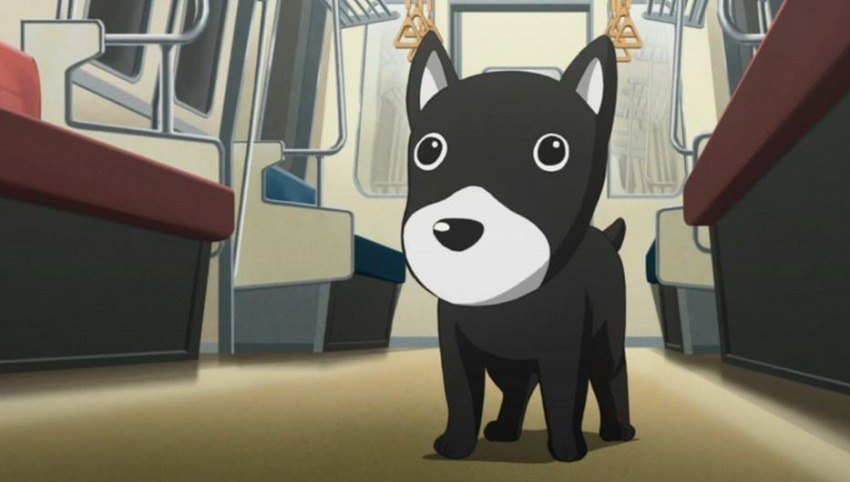 Tokugawa is a small cute looking black dog from the anime series ‘Miracle☆Train: Ooedo-sen e Youkoso’. It somehow makes its way into the Miracle Train. Don’t be fooled by its cuteness though. He cannot talk with the train guys but when he speaks it is always in malicious language. He is kind of mysterious and is seen residing in the Miracle Train. Though there’s a high probability of him being a pet, he claims not to be one. His thoughts are often quite comic and are mostly sarcastic. I didn’t like the series it is mediocre at best. 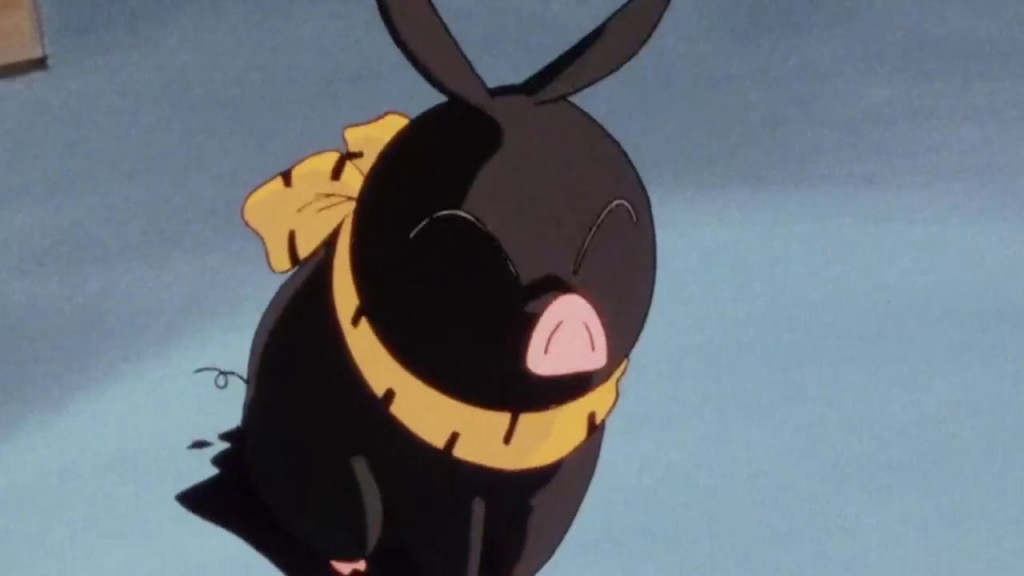 Ryoga Hibiki is an important character from the classic anime series ‘Ranma 1/2’. The series is based on a martial artist Ranma who during a trip to China along with his father fell into a cursed pond and now Ranma is cursed. Hot water can change him into a girl and can be only changed back using cold water. Ryoga is eternal rival and friend of Ranma. He can change into a cute little piglet, the subject of our discussion. Though he becomes cute and innocent, the personality of Ryuga Hibiki still remains in the piglet form. 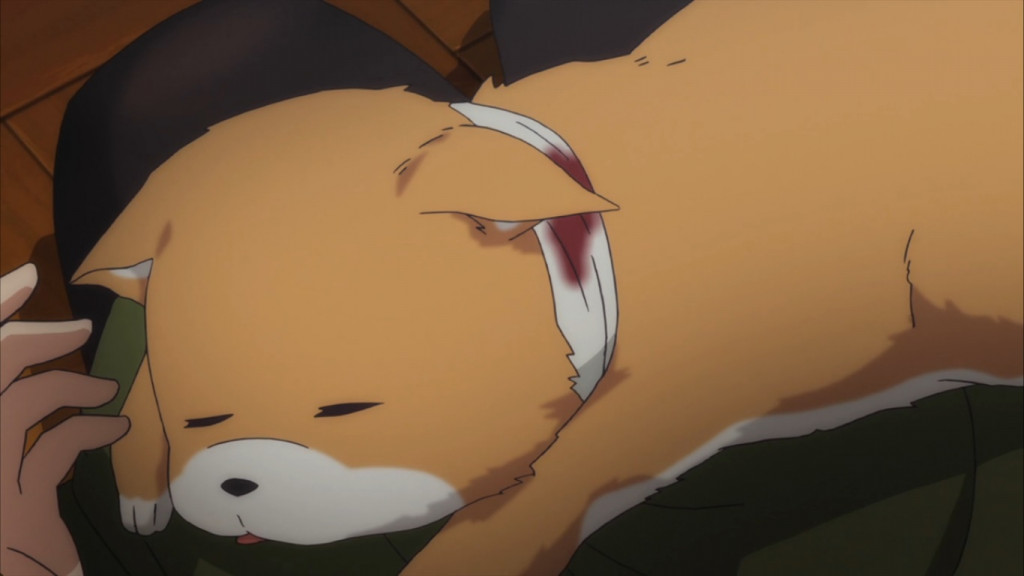 Taroumaru is a dog from the zombie-themed anime ‘Gakkou Gurashi!’. I liked this anime since it is short and has good enough plot. The main character is Yuki who loves her school a lot. She enjoys being in her school and never wants to leave it, But the reality is something else. The world is facing a zombie apocalypse and the girls have barricaded themselves in the school to protect themselves. Taroumaru was found by Yuki. She was the one to bring him to the club. Taroumaru evolves as an anime character. From being just cute to actually important he sure is an interesting dog. His story is kinda tragic though. 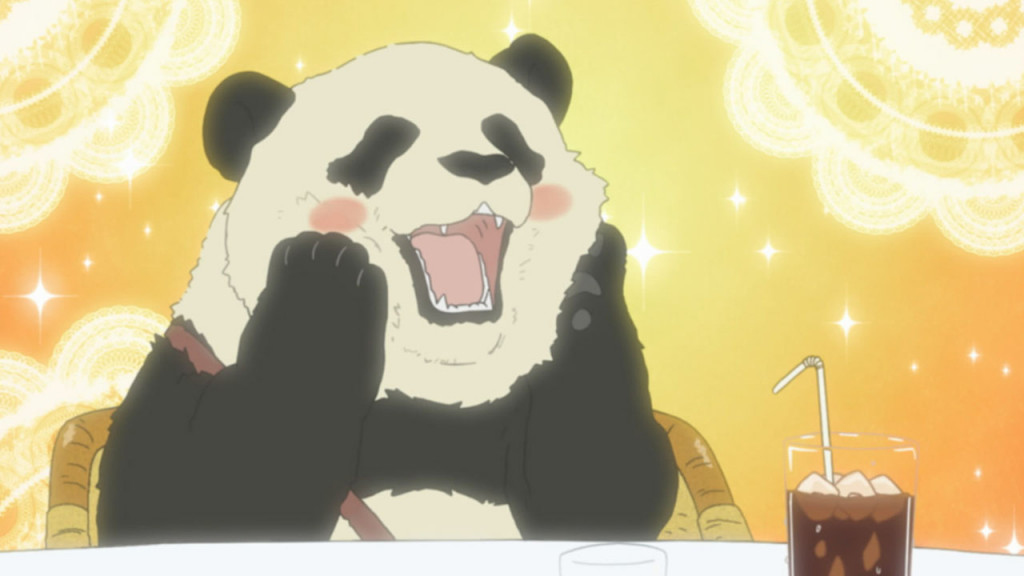 If you love animals then this anime might interest and entertain you. Panda is one of the many animals from the anime series ‘Shirokuma Café’. Now, there is nothing unique or special about Panda. He is just a cute and cuddly panda. There isn’t any weird Kung-fu training going on. I think that’s what makes the character special. They have been able to put the true and natural nature of a panda through this character. He is lazy and is mostly seen eating bamboo sticks. He also loves panda merchandise. 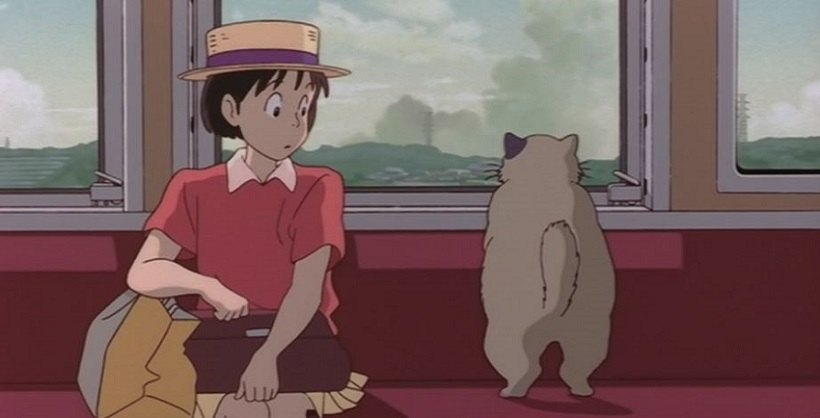 Renaldo Moon is a cat seen in the anime movie ‘Mimi wo Sumaseba’. It is a fat, cynical cat who is first seen riding on a train. Shizuku Tsukishima is the main protagonist of the anime. She loves reading books and often visits the library. It is while returning from the library via train she sees Renaldo Moon or Muta, as the cat is mostly referred as, riding the train. She did find the fact strange and decided to follow Muta. This led to her finding out who the boy in the library is and where he lives. Muta has sort of a mysterious air about him and is not your textbook cute and cuddly. 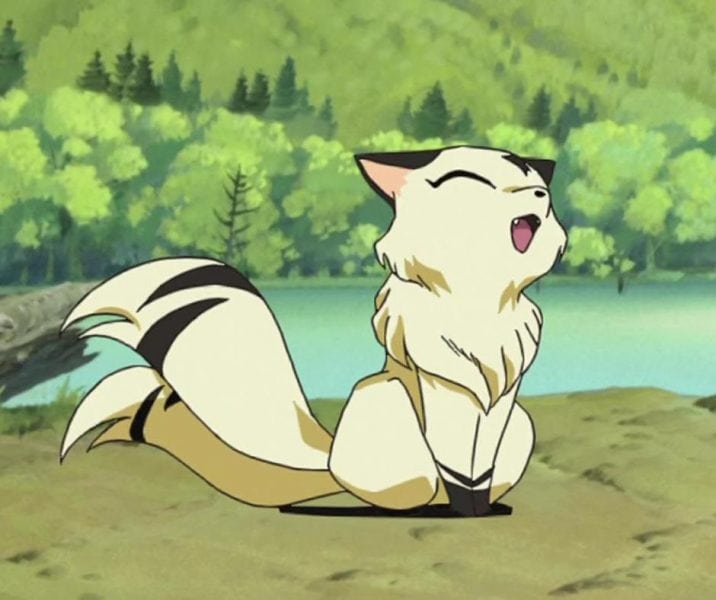 Kirara is a cat-like creature from the classic anime ‘InuYasha’. I did mention that Kirara is a cat because it is the closest thing, in reality, that kind of matches her appearance but she has much more difference than similarities. Kirara has two yellow tails with black markings and small fangs. She is one of the cutest animals in anime. Kirara also has a black marking on her forehead. Kirara is quite useful as she can run at high-speed and can even fly. Sango is quite close to Kirara and uses her for transportation. 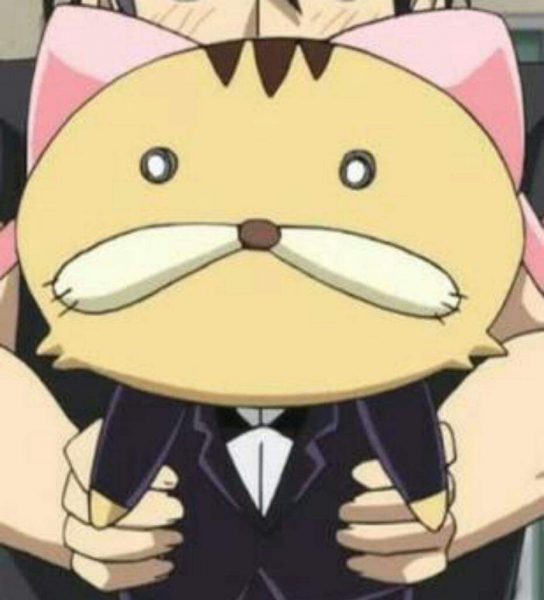 Branya is a pet cat from the ecchi, harem genre anime ‘Mangaka-san to Assistant-san to, ManAshi’. The plot of the anime series is mainly focused on a manga creator named Aito Yuuki and his assistant Ashisu Sahoto. THere is one massive problem with Aito though. He is a huge pervert which makes him kinda repulsive. In a search of finding a mascot for his current work, Aito keeps on drawing and sewing mascots. But he later finds Branya, a small kitty who is quite similar to his drawing. Branya then becomes Aito’s pet and is also the mascot for Hajicafe his new manga. 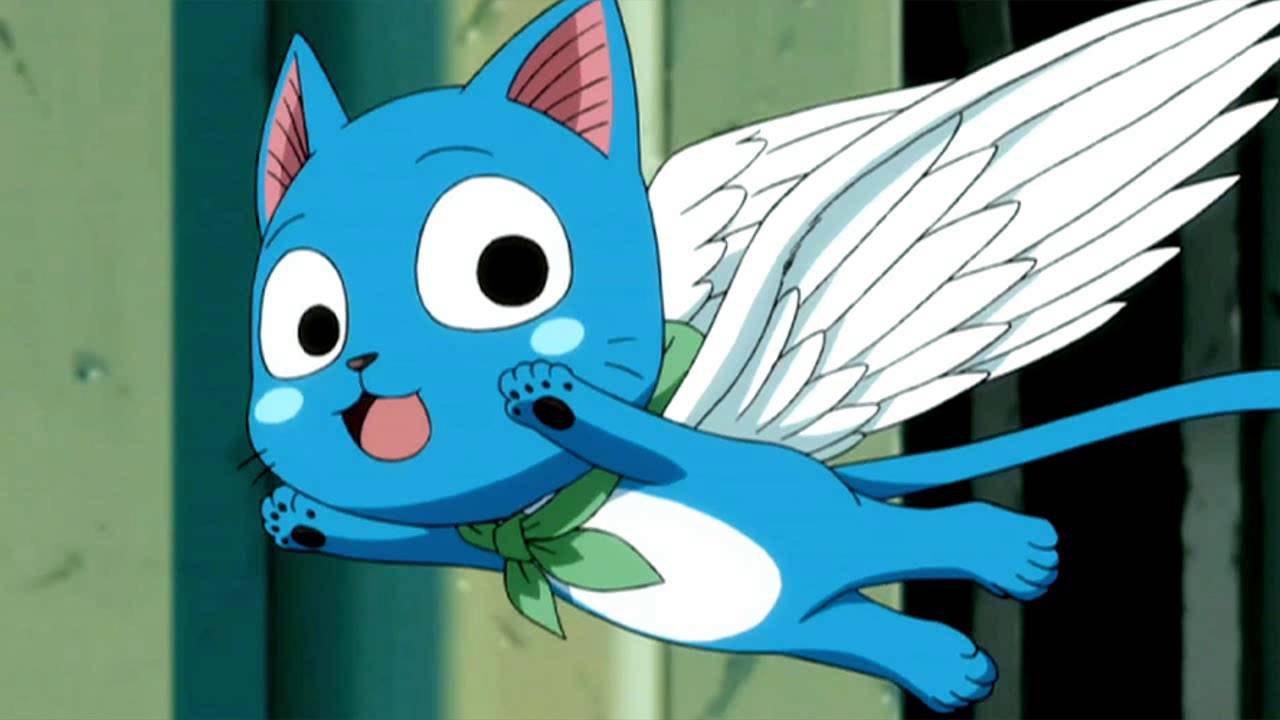 Happy is a cat with magical powers from the fantasy anime series ‘Fairy Tail’. He has a cheerful and friendly personality and is an important member of the Fairy Tail guild.  Happy always try to be optimistic, even in critical situations he tries to maintain a smile. He has the ability to speak and grow small wings which enable him to fly at high-speed. He is quite close to Natsu who rides Happy without getting sick. Natsu is one of the wiser members of the group. 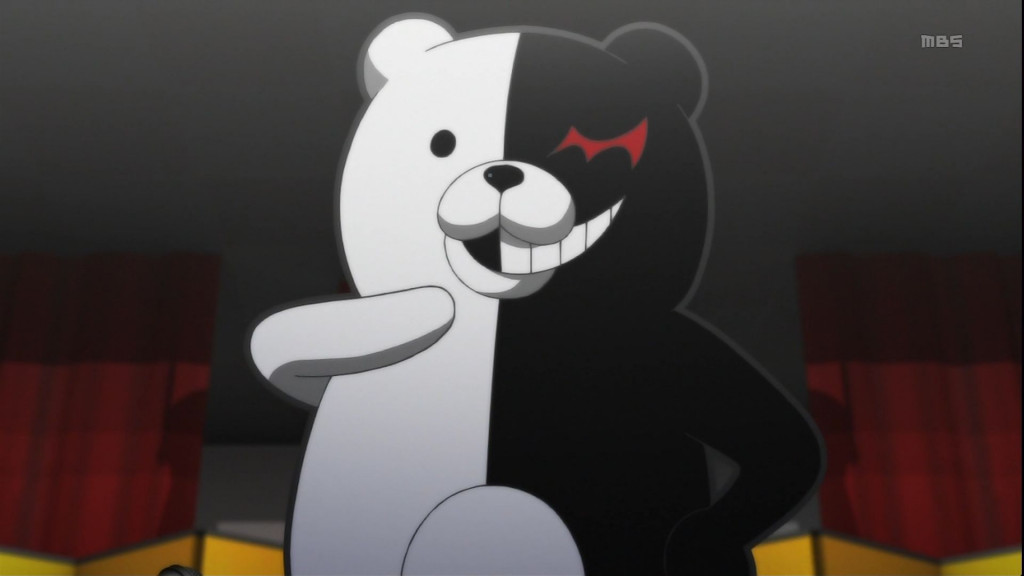 Monokuma is a twisted and evil Teddy Bear from the anime series ‘Danganronpa’. He claims that he is the principal of the school. Since the original mastermind or owner of the school is a mystery or rather unknown, students have to interact with Monokuma only. His appearance is that of something evil. His left side is of white color and looks like a normal cute teddy bear but his right side is a dark creature with red demonic eyes. This dark side of his also has a demonic grin.

Ein is a genetically engineered Welsh Corgi from one of the best space adventure series ‘Cowboy Bebop’. He is highly intelligent since he is genetically modified. This means that his name might be short for Einstein. Ein is sort of an artificially enhanced data dog and has a lot of talents. He can hack systems and is seen communicating with Edward. He becomes the member of the group in a comical way. Ein doesn’t like eating bean sprouts. 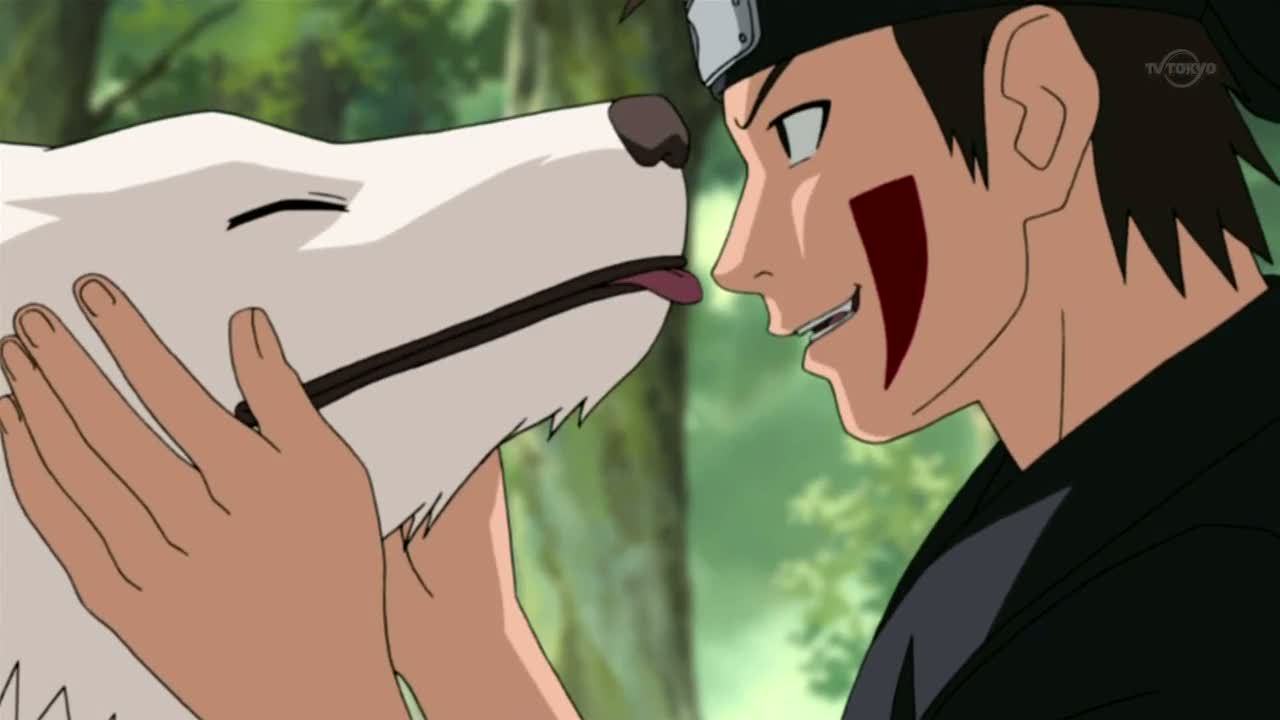 Akamaru is the ninja dog from the ninja-themed, action anime series ‘Naruto’. He is the dog and fighting partner of Inuzuka Kiba. Kiba’s tribe members are skilled with wolves and dogs and can breed them for fighting. Akamaru has an enhanced sense of smell. I love Akamaru and have enjoyed watching him since he was a pup in ‘Naruto’ to becoming a fully fledged ninja dog in ‘Naruto: Shippuden’. Akamaru has white fur but on eating a soldier’s pill his fur turns red. He loves Akamaru and his friends a lot and would do anything to protect them. 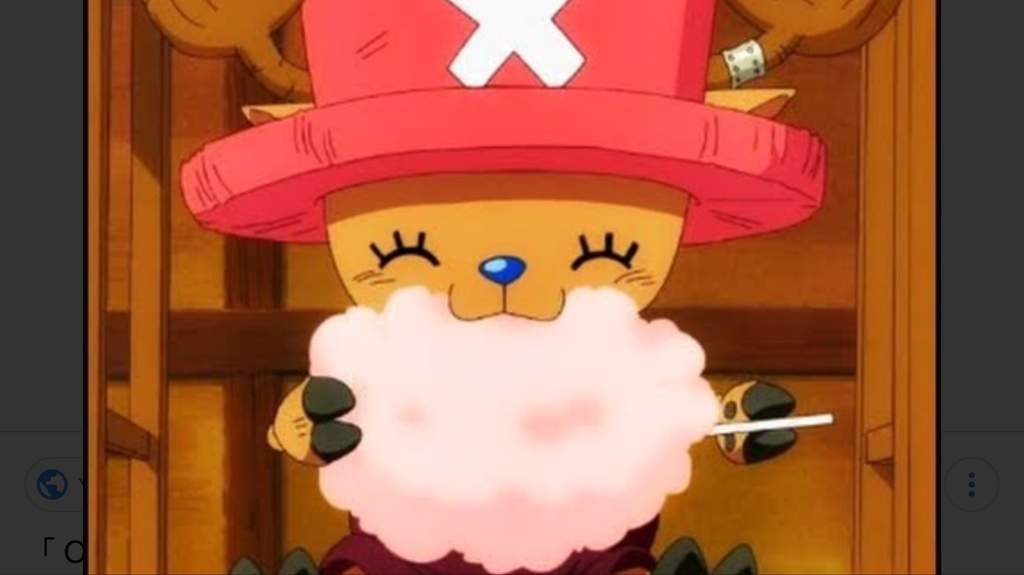 Tony Tony Chopper is the cute reindeer from the popular anime series ‘One Piece’. What is a reindeer doing on a ship filled with pirates? Well, the answer is that he is the onboard doctor. Yup, though he might not look much, he is quite capable and skilled. He actually hails from the Drum Islands. This is where he learned the skills necessary to be a doctor. He joined the Straw Hat’s crew when they had come to Drum Island. The devil fruit he ate is Hito Hito no Mi. Chopper owns a personal Jolly Roger. It features the common skulls and bones but with cherry blossoms. 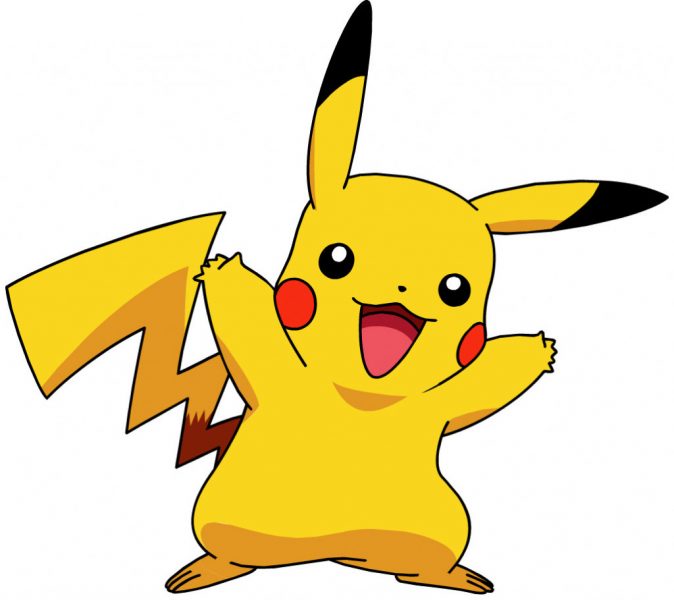 Pikachu is arguably one of the most popular animals in anime. It is a rodent-like cute pokemon covered with yellow fur and has black stripes on its back. It is an electric type pokemon. Ash Ketchum, the main protagonist of the anime series owns a Pikachu which rides on his shoulder and is not kept in a Pokeball. Pikachu evolves from Pichu and can evolve into Raichu. Its main ability is that it produces electric bolts. These are produced from red circular spots on its cheeks.