12 Best Anime Cats of All Time

Cats are a small, fluffy ball of fur. They are generally depicted a lot in anime and cartoons. So, this time I thought why not compile a list of some of the best cat characters that I have seen in anime over the years. These cats have made their own mark in anime films and shows and unless you are a heartless sadist, there is no way you didn’t find these fiery animals adorable. Here’s the list of top anime cats ever. What is your favorite anime cat? 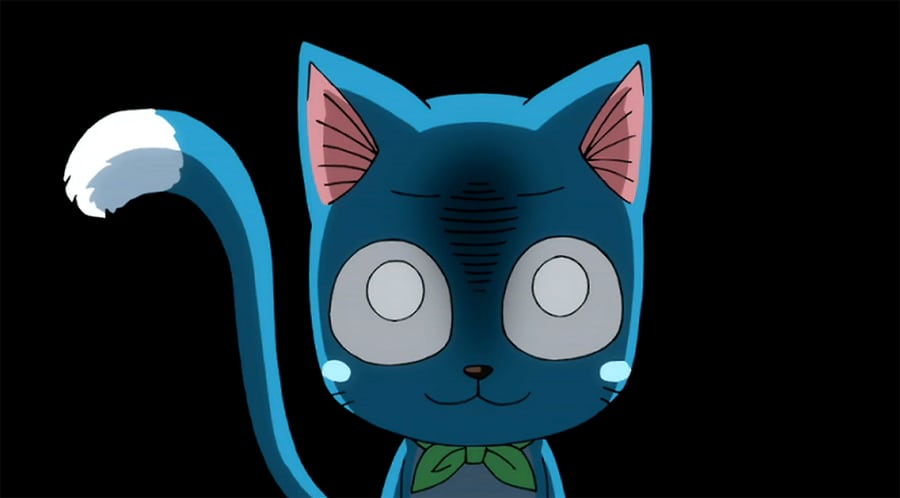 Happy is the magical cat from the anime series ‘Fairy Tail’. Though his exact reasons for joining the Fairy Tail Guild are unknown, he is quite an important member of the group. It is also unclear if Happy actually wanted to be a mage. Happy is quite resourceful when it comes to magic. He can speak very well in human tongue. He can also grow a pair of wings which can then allow him to fly really fast. This ability of his has been quite useful for the members of the guild especially Natsu who doesn’t get sick when being towed by Happy. Happy has a bright and cheerful personality. He tries to keep a smile even in the gravest of situations. He is a close friend of Natsu and Lucy. 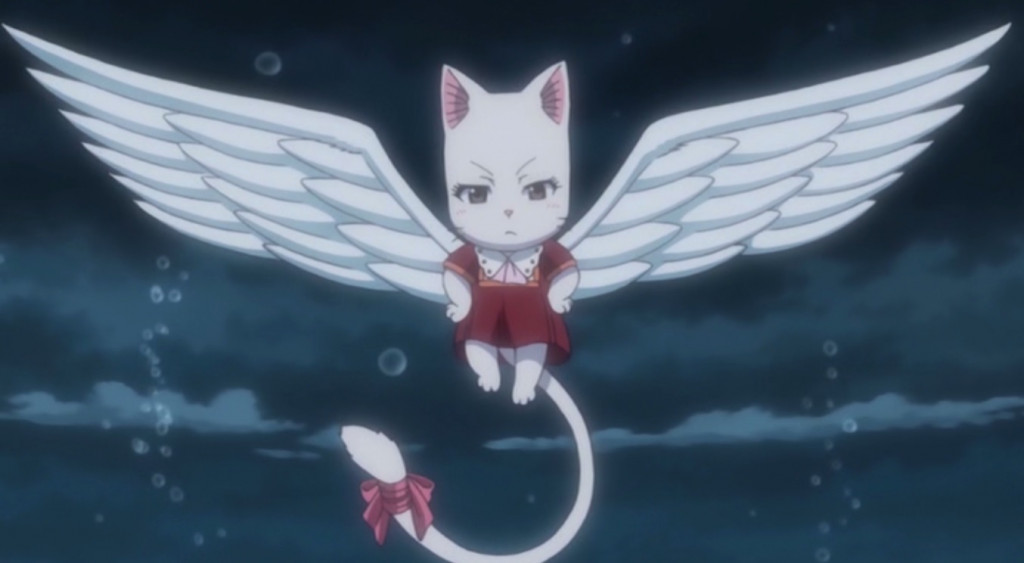 Well, up next we have another feline from the ‘Fairy Tail’ anime series. Carla is a female talking cat who is quite similar in her magic to Happy. She is six years old and belongs to the Exceed race. Carla is currently affiliated with the fairy tail guild. She was previously affiliated to the group Cait Shelter. Her magic abilities are Aera and precognition. Her partner is Wendy Marvell who actually found Carla when she was an egg. Since then the duo has been together and are quite close. Carla loves Wendy a lot and seeks to protect her from any danger. She is the complete opposite of Happy when it comes to her personality. She is quite stern and doesn’t appreciate fooling around. 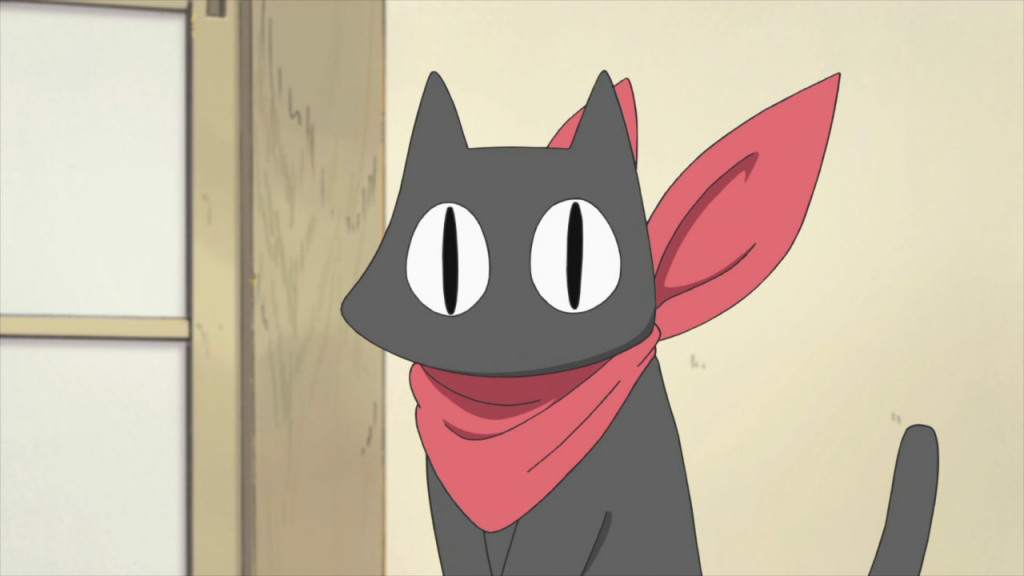 ‘Nichijou’ is a fun little anime. If you are interested in the slice of life genre anime with light humor then you might enjoy watching this anime series. Sakamoto is a talking cat. I mean the cat is a normal black cat but it’s the red scarf he wears which does the magic. The red scarf is actually created by the professor. This device actually allows the cat to speak to humans. Since cats do not live as long as humans, if you compare cat years to human years Sakamoto technically turns out to be much older than both the professor and Nano. He prefers to be referred to as Sakamoto-san as opposed to Sakamoto. Though he acts like an adult he sometimes succumbs to his true cat nature. 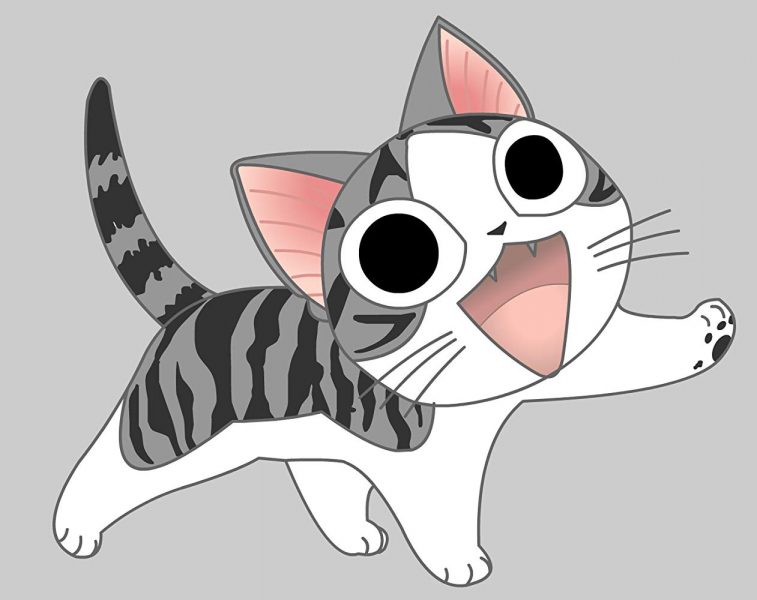 ‘Chi’s Sweet Home’ is a great anime for kids. It focuses on the life and adventures of a cat named Chi. Chi is a cute little cat who was founded by a boy named Youhei while returning home. Youhei and his parents decide to bring Chi home. This meant that they will be taking some risk since their apartment has strict rules against keeping pets at home. Chi immediately starts to feel at home in her new house and bonds with her new family. She has lost her mother and was alone when Youhei found her. Chi loves sushi and doesn’t like to go to the vet. She always wants to play and is sometimes quite stubborn. 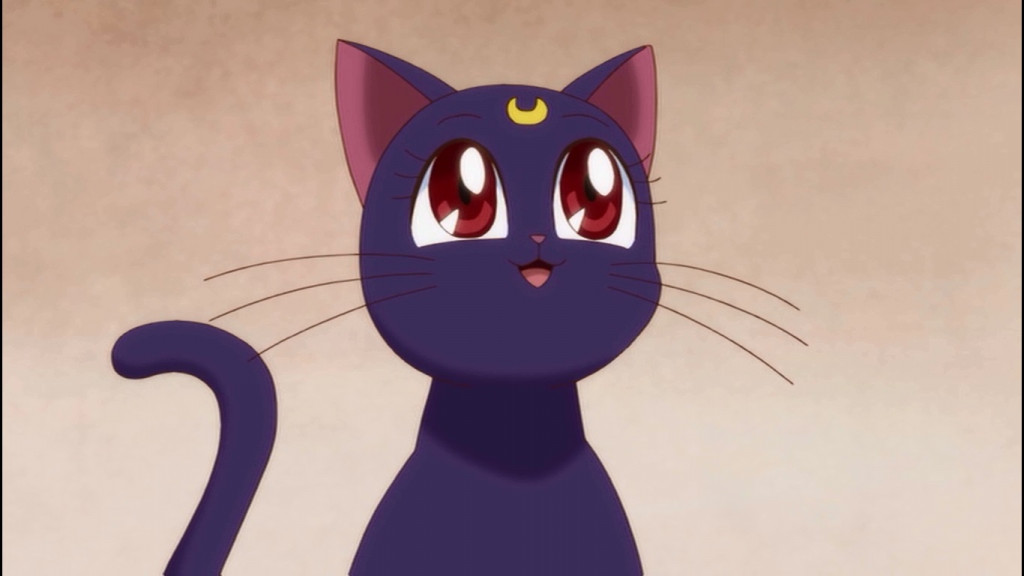 Though a cat Luna is one of the most important characters in the anime series ‘Bishoujo Senshi Sailor Moon’. Luna appears quite early on in the series. She is shown to be a wise cat who often gives advice to Usagi. Luna used to be the servant to Princess Serenity and was close to her. She never wanted to leave her side and always wanted to take care of her. But unfortunately, after a certain turn of events, the kingdom had fallen. Luna along with Artemis was put into a long, deep sleep and was sent to Earth. Here they were tasked to find and look after Senshi who was prophesized to have a rebirth there. Luna ended up finding Usagi and taught her how to be a Sailor Moon. Luna has bright red eyes and a crescent symbol on her forehead. 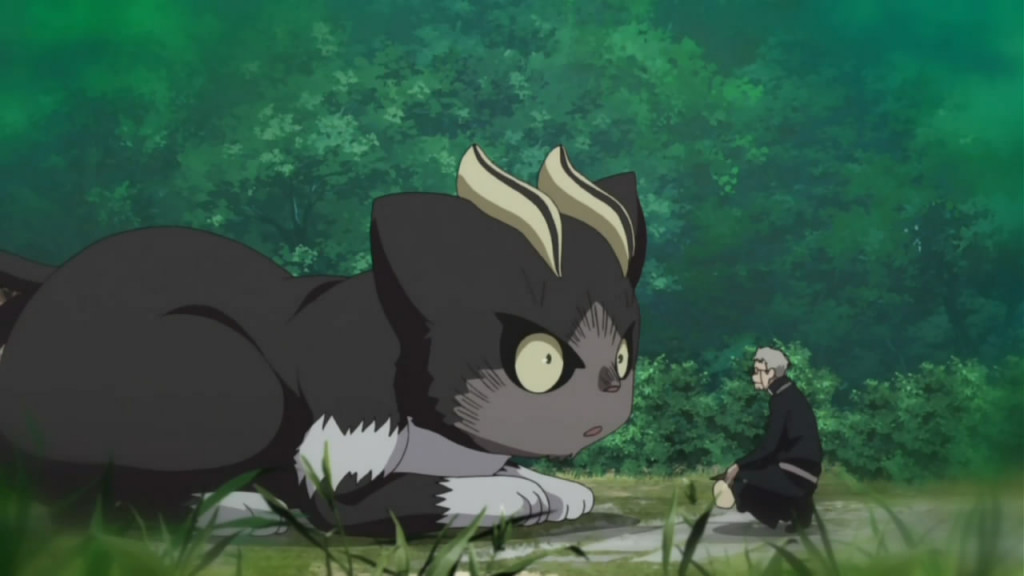 Kuro is a sort of divine cat from the supernatural anime series ‘Ao no Exorcist’. One of Kuro’s distinct feature is his two tails. This phenomenon is considered quite sacred in the Japanese culture. Kuro is currently the familiar of Rin Okumura, the main protagonist of ‘Ao no Exorcist’. Shiro Fujimoto used to be the one whose familiar was Kuro. But after his death at the hands of Satan Kuro didn’t have anyone. This made him vulnerable to humans making him quite violent around them. Though Kuro is mostly covered with black fur, his chest is covered with thick white fur. He has greenish-yellow eyes and two little horns. 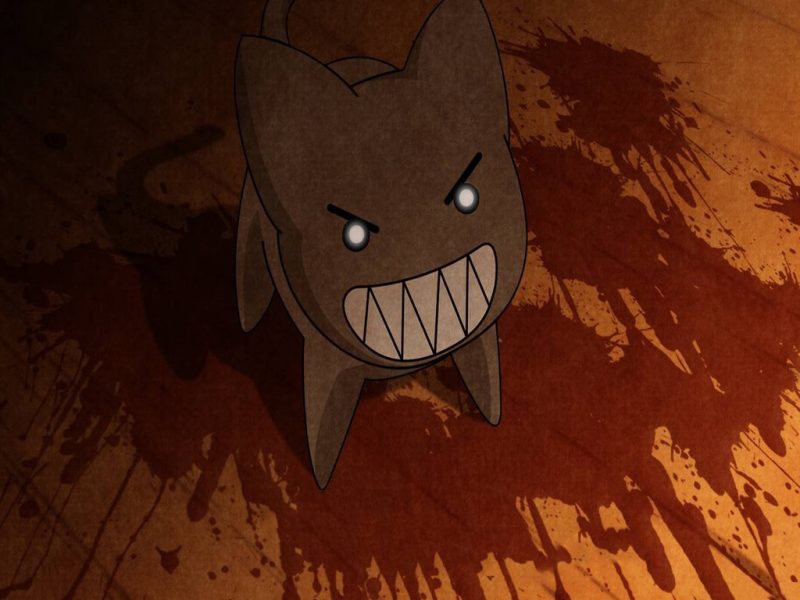 Kamineko is a cat which appears in the anime series ‘Azumanga Daioh’. Sakaki is a tall beautiful girl from the series. She has a soft corner for cats. She is one of the reasons Kamineko gets the screen time on this anime. Sakaki encounters Kamineko regularly while going to and returning from her school. Sakaki tries to pet Kamineko but Kamineko is not your everyday version of cute cuddly cats. It actually bites Sakaki on her hand. What makes it more painful is Kamineko has beartrap-like teeth. Kamineko doesn’t like Sakaki at all. This is evident from the episode when Kamineko makes all the cats of the neighborhood attack Sakaki. 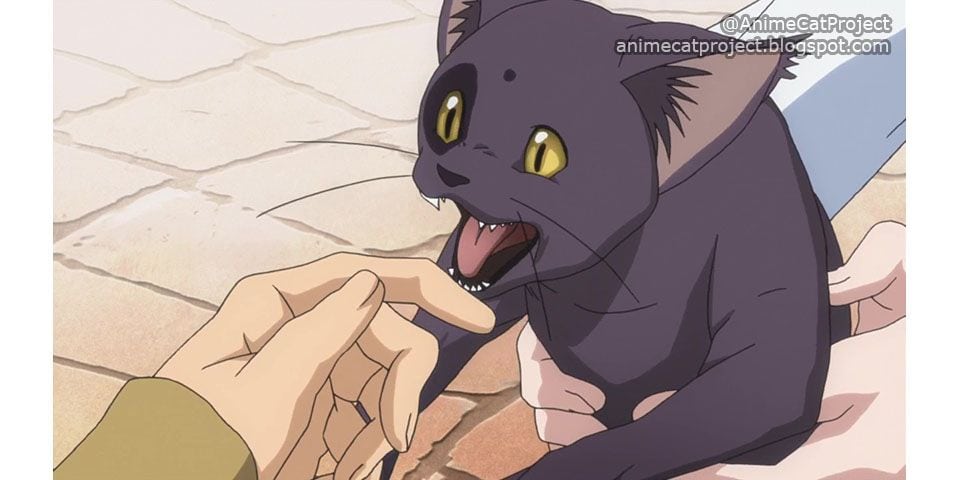 Arthur is a stray cat from the anime series ‘Code Geass: Hangyaku no Lelouch’. It is befriended by The Third Princess Euphemia. Their encounter happens when Euphemia arrives in Area 11. Arthur can sometimes create quite a commotion. This behavior of it is evident from the time when it entered the Lamperouge residence and ran off with Lelouch’s Zero Mask. This caused quite a nuisance as the entire student body had to run after him to get back the object he took. Suzaku takes a liking for the cat and creates a cat house for it. Though it is shown that Arthur keeps on biting Suzaku, it can be inferred from the instance when Arthur was watching over Suzaku’s grave that it had started to care for him. 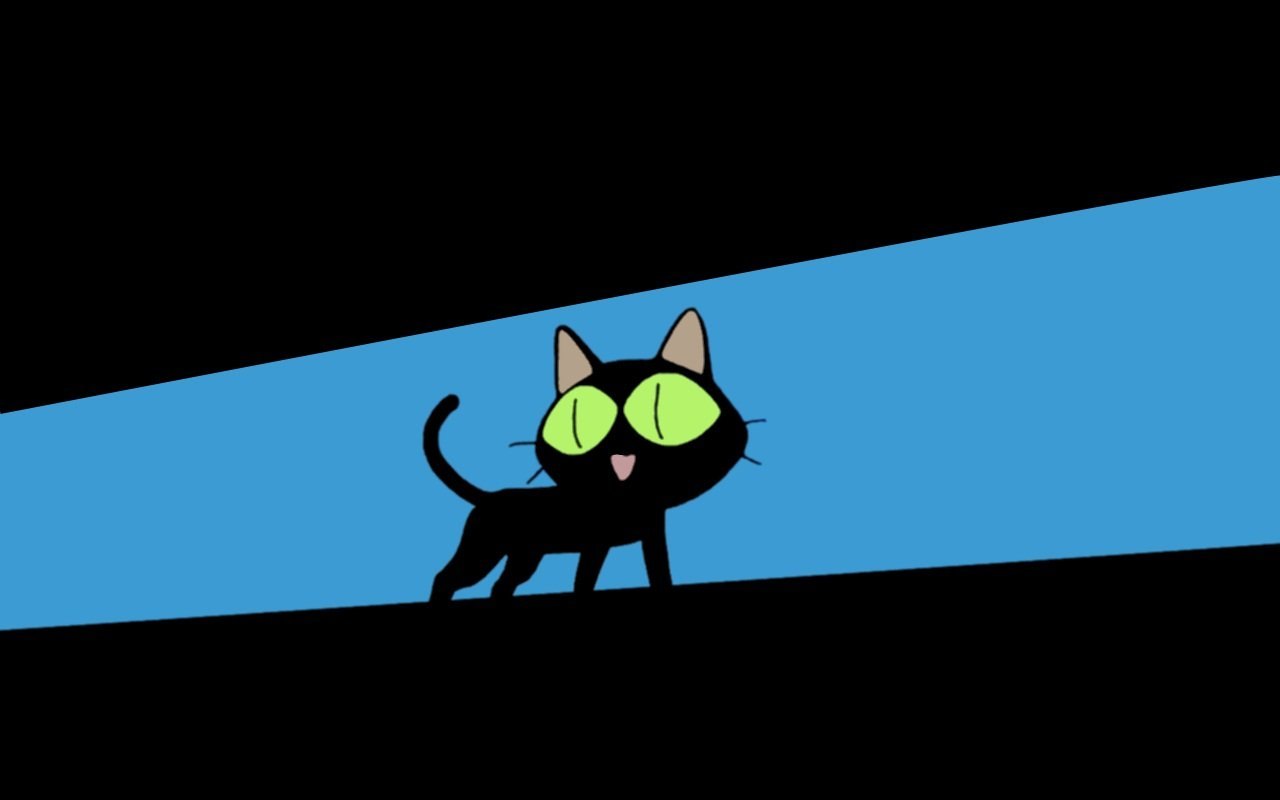 Kuroneko or rather Kuroneko-sama is a black cat from the space adventure anime series ‘Trigun’. Though not much important to the plot Kuroneko can surely lighten up the scene. She regularly appears in the anime series and is present in almost every episode. The character of Kuroneko is mostly used for comical purposes and also for the purpose of implementing some running gag to last throughout the series. Kuroneko looks comical too. She has an oval-shaped head and big green eyes. She often utters “Nyaa” when she is on the screen. 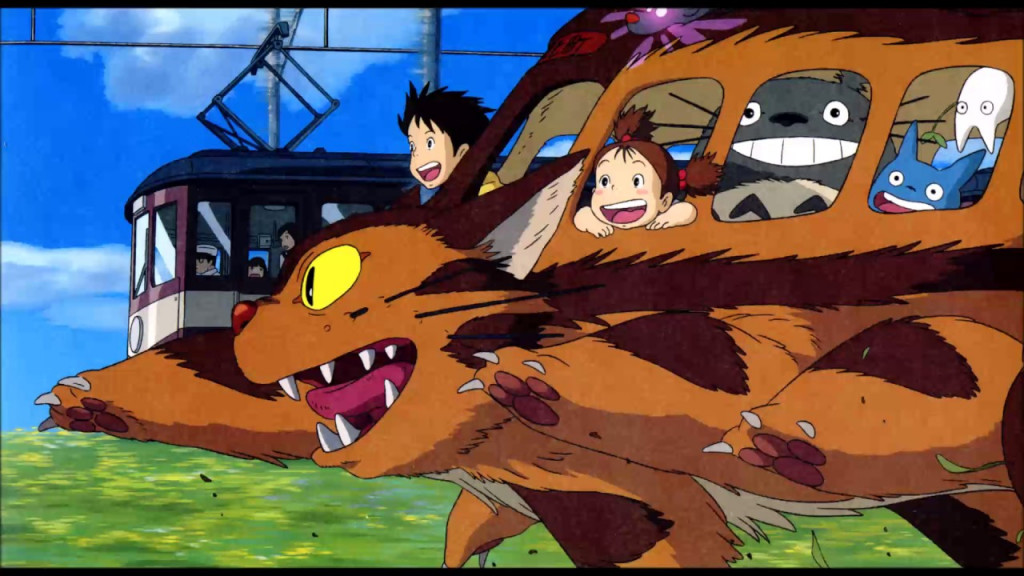 If you have not watched ‘Tonari no Totoro’ then please do so. You will end up liking it. It is a great anime movie from the adventure/magic genre. I enjoyed it a lot. The story sees two sisters Satsuki and Mei move to the countryside with their father to be closer to their mother. As they explore the rural area they soon find out that there is a mystical forest spirit living in the forest. The spirits name is Totoro. Slowly, the two siblings start becoming friends with the spirit and magical adventure begins. Nekobasu is one of the forest spirits. The unique thing about Nekobasu is that he is actually a cross between a bust and a cat. This ability comes in handy at times, like for the instance when Satsuki needed to find Mei. 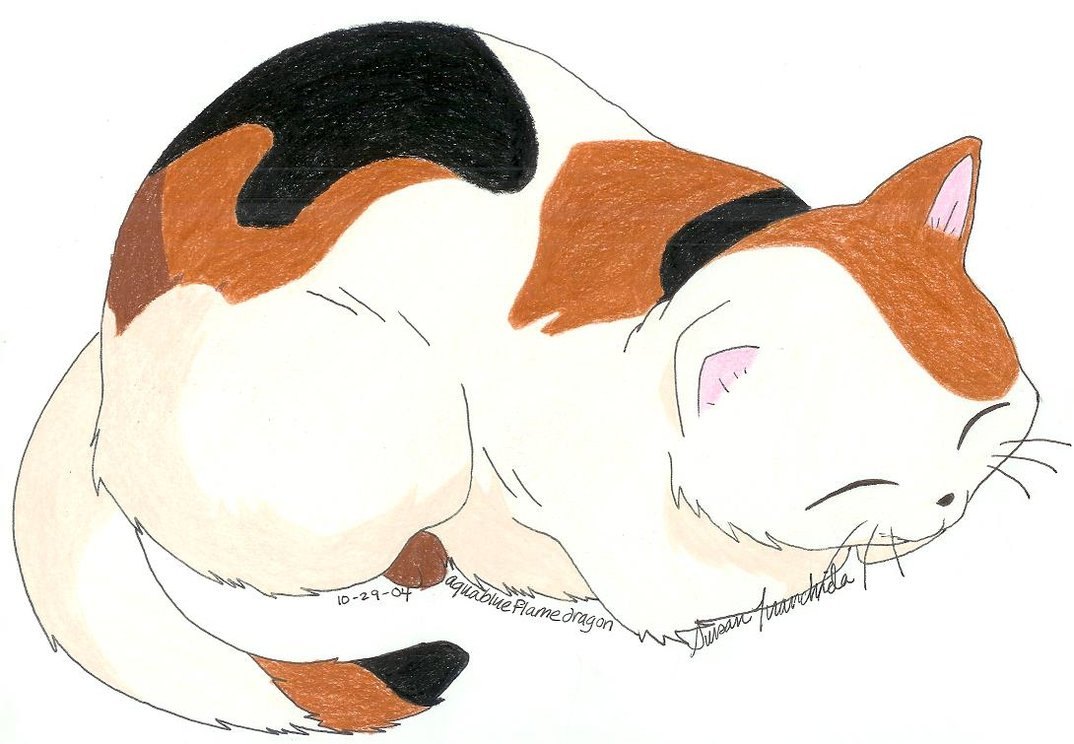 Up next is a big fat cat from ‘InuYasha’. Buyo is a cute fat cat and is the pet of Kagome Higurashi. If you have watched this anime series then you know how instrumental Buyo was in kicking start the wonderful adventure that Kagome gets to go on. Buyo had fallen into a well at the family shrine of Kagome. With no other options available Kagome gets into the well. There she encounters a demon who transfers her to the Feudal era. Buyo likes InuYasha too and both of them get along pretty well. 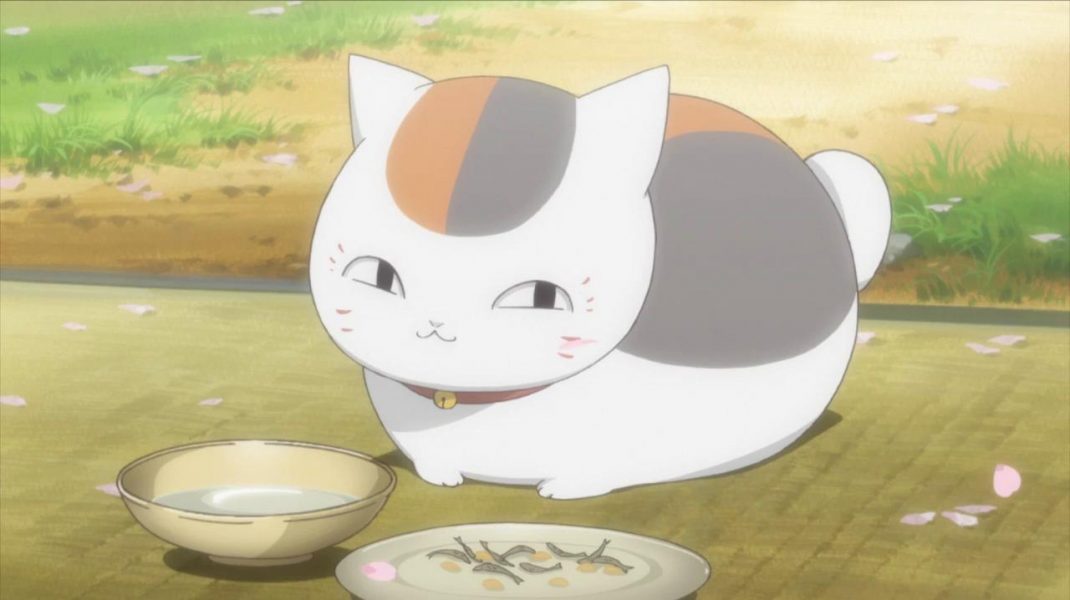 Madara is a cute cat from the anime series ‘Natsume Yuujinchou’. It used to be sealed in a shrine and was once accidentally released Natsume. It generally takes the form of a Maneki Neko due to being locked up in one place for a long time. This has made Natsume nickname Madara as Nyanko-sensei. Madara is quite wise and is a very powerful spirit. He protects Natsume and occasionally teaches him spells in return for the Book of Friends, which Natsume has to give Madara after his death.