Action scenes in anime were what got me started. They are visually stunning, often times one of the guys fighting is emotional and some hidden power gets unlocked making the already awesome scene more awesome. Most popular anime are ones that are geared towards action. So, why not reminiscence some of the best action scenes from our favorite anime series. Here is the list of top anime fight scenes ever. Also, spoilers ahead! 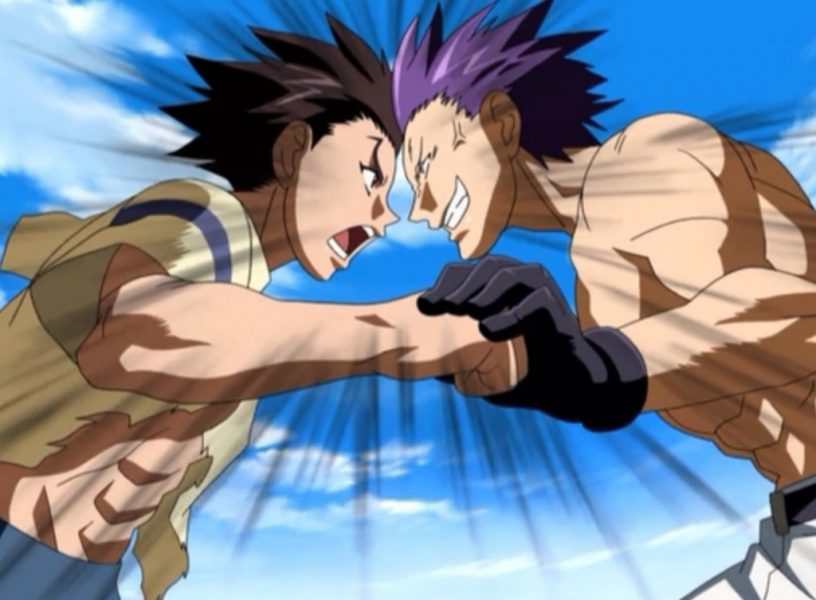 This fight scene comes at the very end of the series and nicely puts it to close. Ryouto used to be Kenichi’s childhood friend. He was nice and kind but now he has become a power-hungry delinquent and wants to defeat Kenichi. This fight shows both the fighters at their best. While Ryouto goes all out combining the bloodthirst and calmness present in him, Kenichi goes back to the basics and imitates his masters to get an edge over Ryouto. This scene is filled with some stunning martial arts moves. 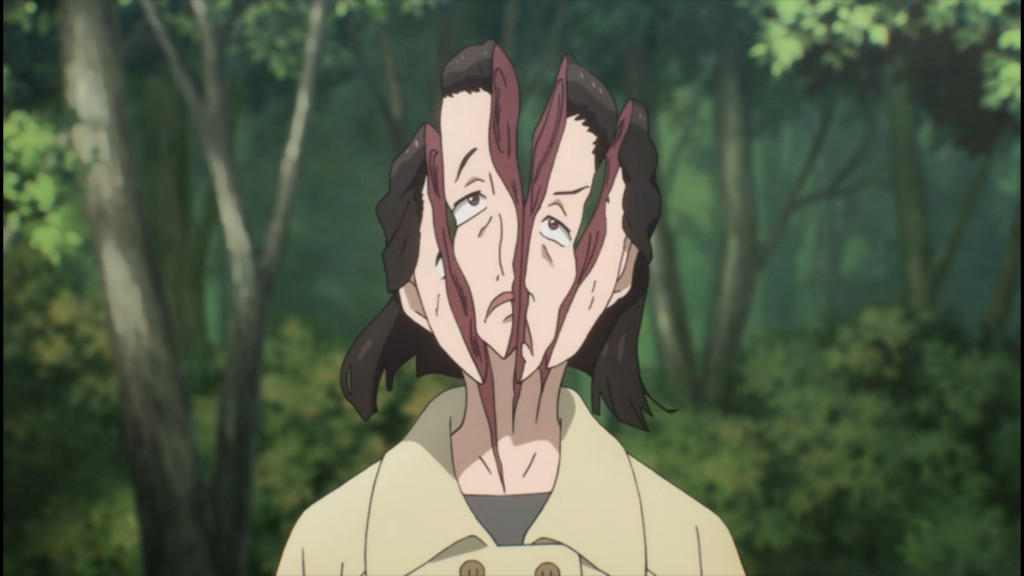 This scene though awesome as it shows Shinichi’s newfound abilities is kinda sad. Shinichi’s mother was killed by the aliens and now her body is just a host for the parasite. To stop the alien’s killing spree he has to fight the monster who looks exactly like his mother. Shinichi fights hard and gets an edge over the monster but is stopped in his tracks as he sees the scar on his mother’s body which triggers a childhood memory. Thankfully his new ally, Udaka, saves him by killing the monster. 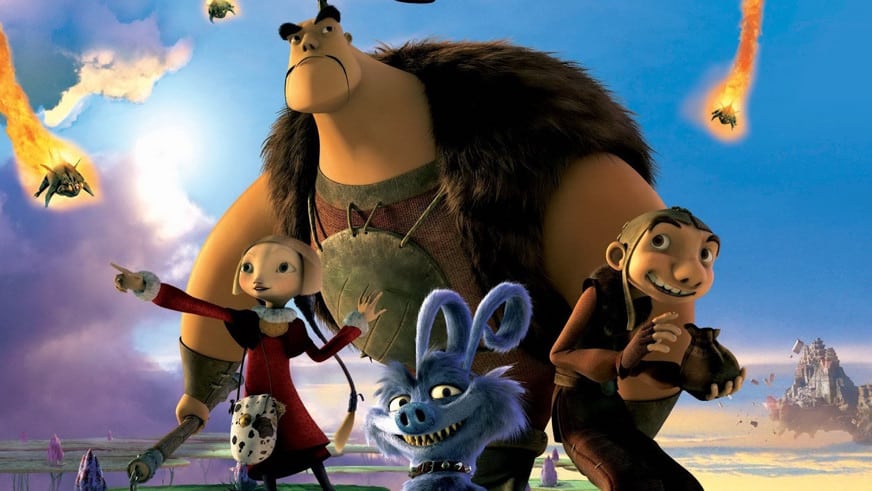 Well, I decided to include this fight scene on this list since it showcases one of anime’s most anticipated transformations. Yup, it’s Goku changing into his Super Saiyan Form for the first time. This moment comes during Goku’s battle with Frieza. Frieza kills Krillin and infuriates Goku catalyzes his transformation. The transformation spanned almost an episode and after he attained the form he was able to defeat Frieza easily. 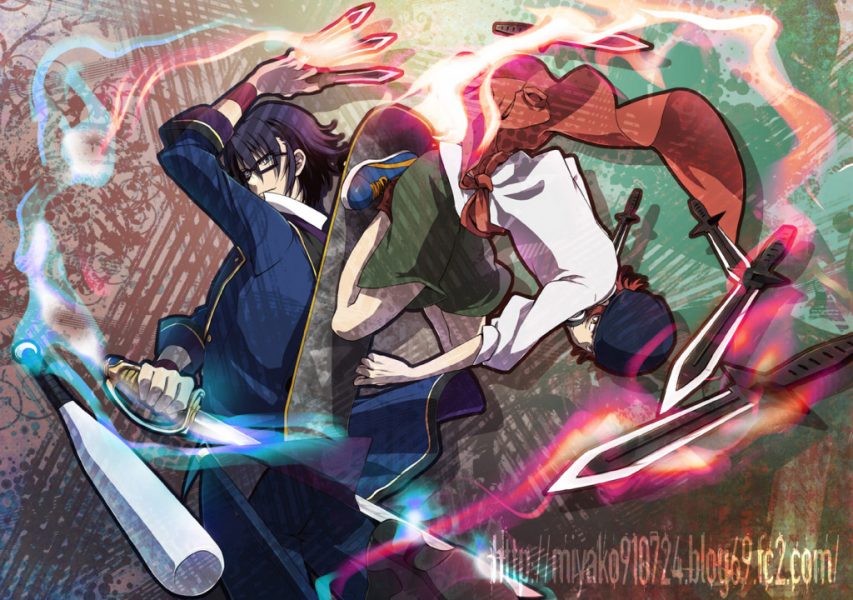 I don’t know if I am the only one but I like the way fight scenes are shot in ‘K-Return of the Kings’. This fight isn’t an exception either. We see over-the-top actions move from both the fighters. The visuals are stunning with the screen dancing in colors of Misaki’s pink weapon and Saruhiko’s blue sword. They fight it out everywhere in the air, in the ground, atop buildings, and even while running on the sides of the buildings. 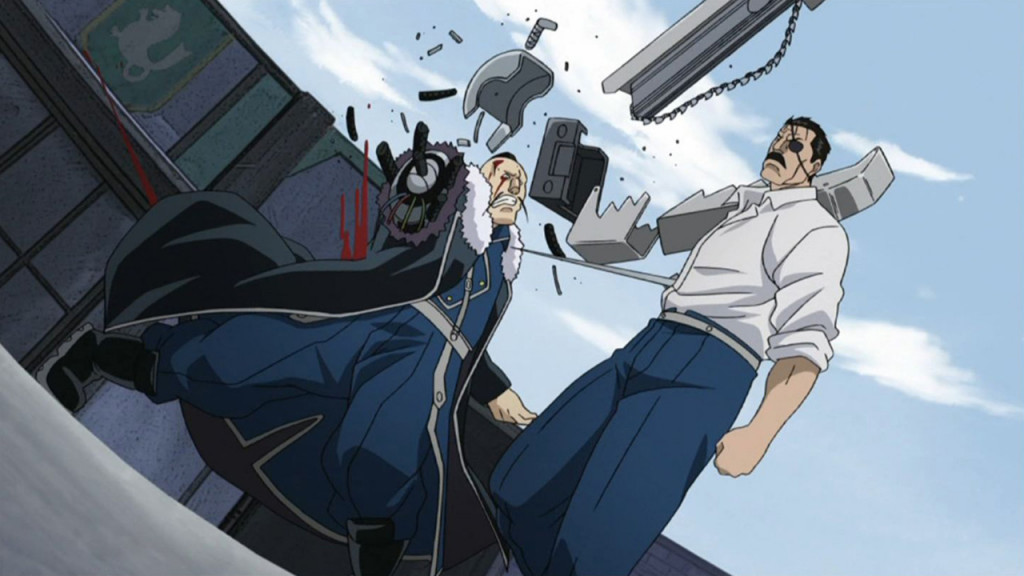 This version of Wrath as King Bradley appears in the 2009 remake. This is a super awesome fight scene. We see King Bradley take a sword and charge head on towards the enemy. He has no worries about the enemy tank that seeks to decimate him rather he deflects all the bullets fired by the machine gun with his swords and even cuts a missile. He then runs straight towards the tank killing its rider. The scene shows how skilled Wrath is. 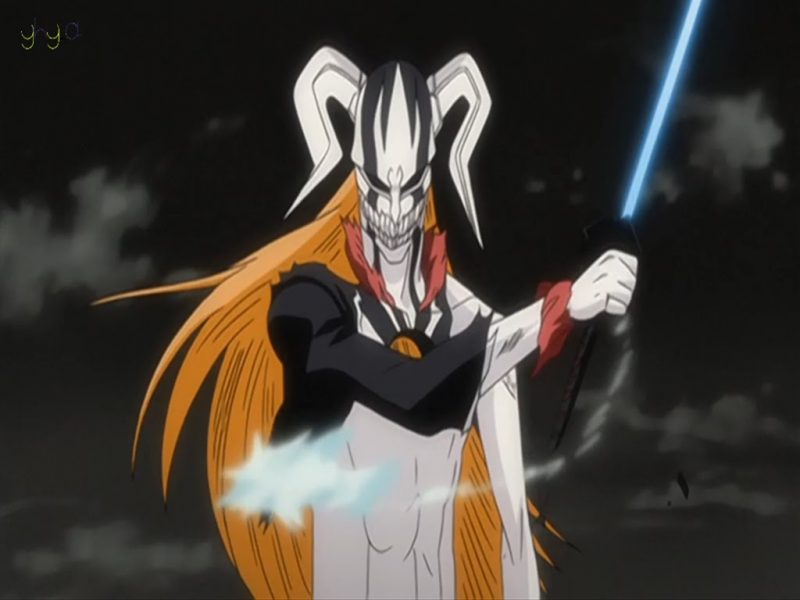 This scene is one of the best scenes which exploits the power of Hollow within Ichigo. After being mortally wounded by Ulquiorra Ichigo lies on the ground almost dead. But then he hears the cries of Orihime being attacked by the Espada. In desperation, a power within him awakens and takes over his body. Ichigo stands up and his face is covered in a white hollow mask with large horns. He has lost control of all his senses and has come very close to becoming a complete Hollow. With this devastating powers, he defeats Ulquiorra. 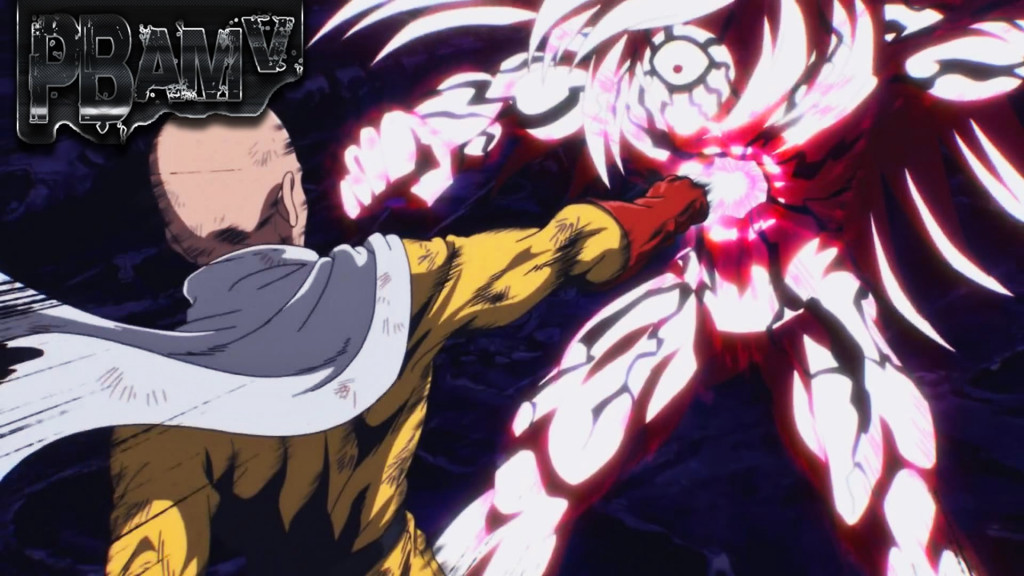 Well, Saitama was going to be on this list sooner or later. This is the last serious fight scene of the series (when the hell will season 2 be released). Saitama easily dominates Boros. This frustrates him so much that he starts to transform in a weirdly colorful way. He then starts attacking Saitama with full force and at one point of time he knees him so hard that Saitama is sent flying to the moon. But he jumps right back to Earth and defeats Boros by launching a serious punch from his serious series (try saying that 10 times). 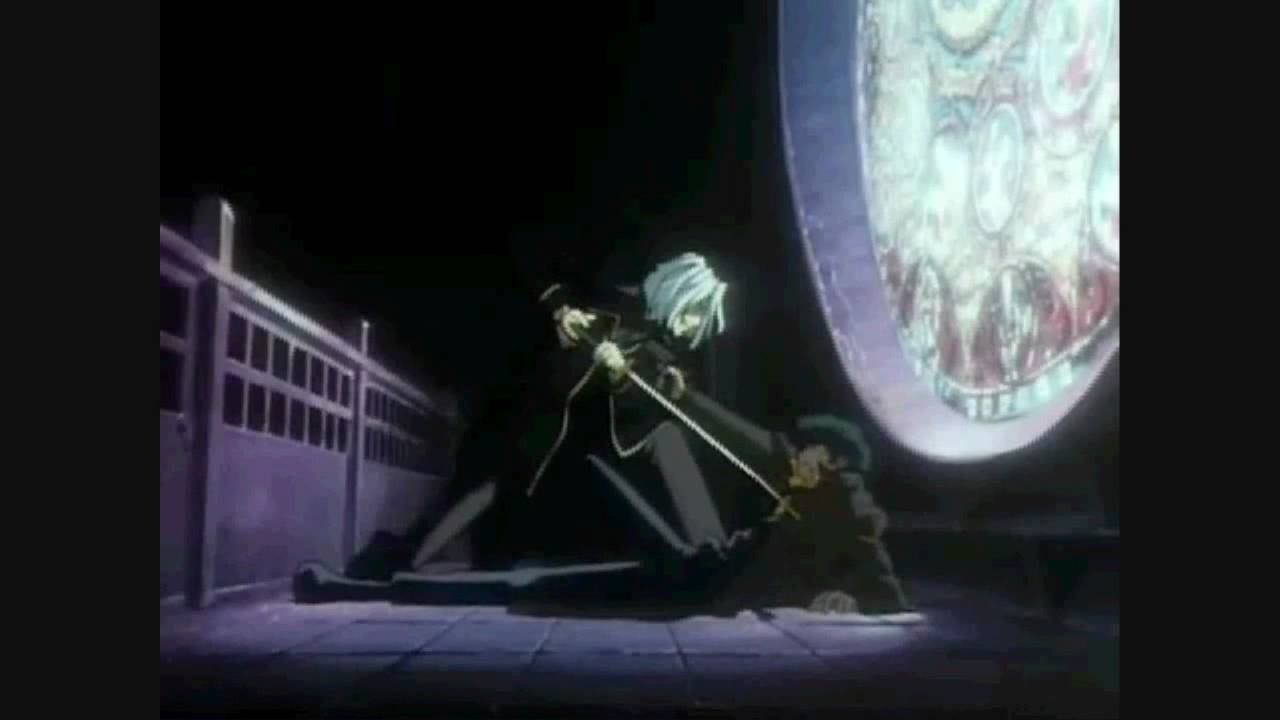 ‘Cowboy Bebop’ will always be a classic anime. It is one of the examples of why anime has so much fan following. This fight scene was evident from the time we learned about the rivalry between Spike and Vicious. After Julia is killed Spike is consumed by revenge. He flies to the place where Vicious is and takes on his army. After fighting his way past Vicious’s soldiers we get to see the one on one fight between Vicious and Spike. Vicious fights with a sword while Spike uses his gun. The scene ends with Vicious defeated and Spike slowly walks away ultimately uttering the word ‘Bang’ as he mimics a gun with his hands. 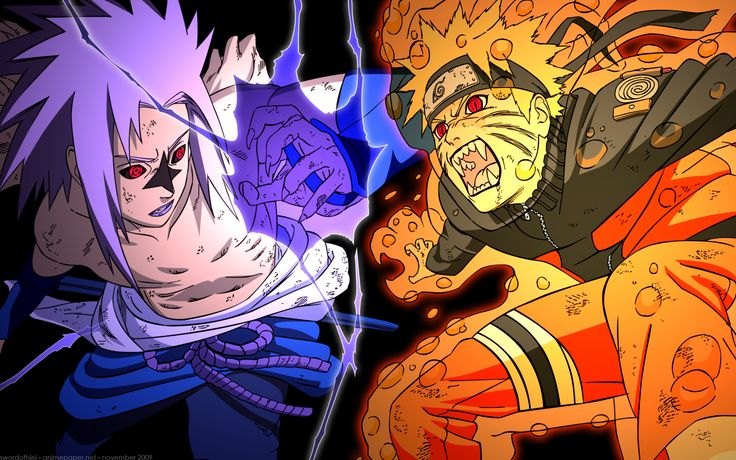 This is one of the first serious fights between Naruto and Sasuke. Taking place in the same setting where Hashirama and Madara fought. The scene is filled with action-packed sequences as both the rivals go hand to hand with each other. Sasuke uses his Sharingan to the fullest while Naruto relies on his Shadow Clones. The final attack used by Naruto is a Rasengan against Sasuke’s black Chidori. This causes a massive explosion ending the scene. 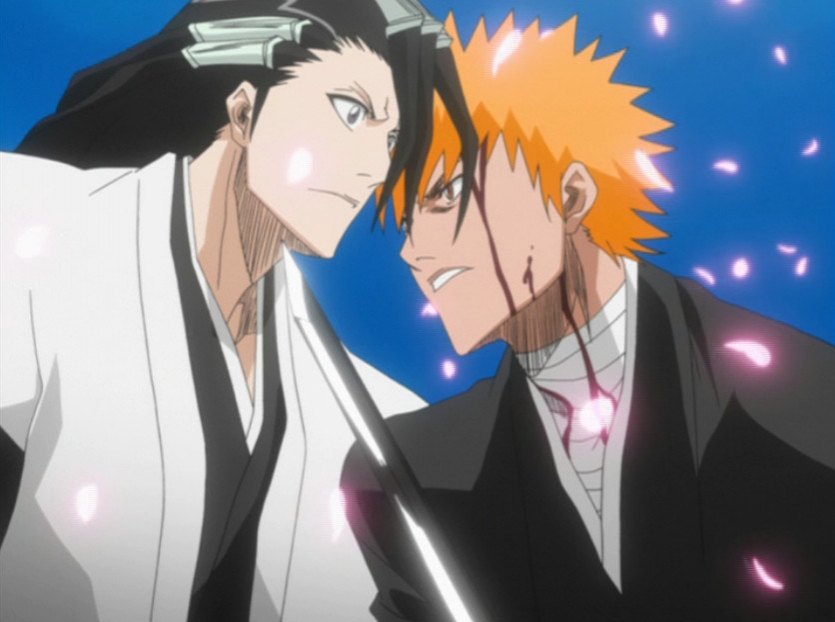 Well, Ichigo is again on the list. Come on, this was the first time Ichigo used his Bankai. This definitely deserves a spot on this list. This scene shows how far Ichigo can go to save his friends as he trains hard with Yuroichi to finally achieve his Bankai. Byakuya can’t believe it since he has never seen such a minimal Bankai form. He calls out Ichigo and attacks him but soon realizes that Ichigo’s speed and precision have increased by a lot. The fight is really interesting and keeps the viewers on the edge. 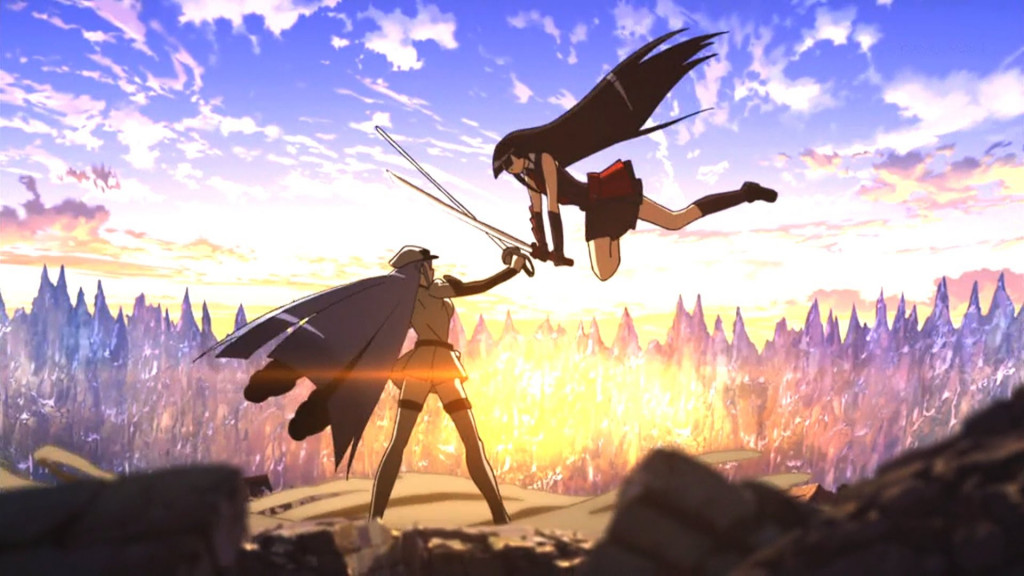 Man!! I don’t know whether to enjoy this fight scene since Akame is awesome or cry since Tatsumi is dead. In this scene, we truly see how much Akame cared for Tatsumi as she gets angry and cuts herself with her own sword letting the curse take over her body. She gains high speed due to this and attacks a shocked Esdeath. She is so fast that Esdeath can barely see her. In the final moments, Akame jumps to attack Esdeath but Esdeath is ready as she freezes time. But wait! Here we can really comprehend the speed of Akame. The frozen Akame in front of Esdeath is just an after image. Esdeath realizes it a bit too late and is dealt the final blow from above. 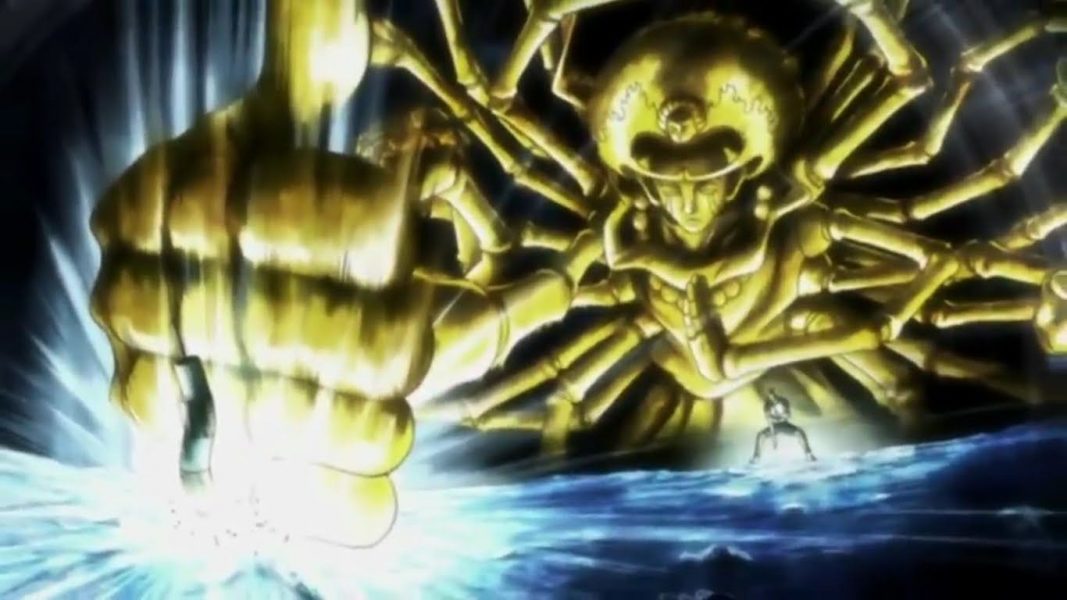 This is a fight between two monsters. Netero is the chairman of Hunter’s association. He is barely shown in action and his powers are kept hidden until the very end. Turns out Netero had practiced so much that he can throw 10,000 punches in an hour and the power of his 100 Type Guanyin Bodhisattva is unparalleled. The fight is amazing, it being a, as Netero referred, a battle of endurance. The fight ends with Netero dying by an explosion caused by him. The ant king too couldn’t have survived if it wasn’t for his bodyguards.