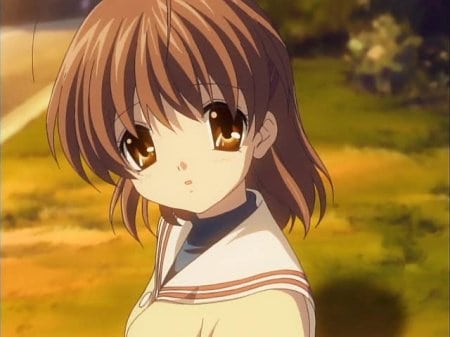 I recently did a list of 12 Best Anime Girls With Purple Hair. In that, I mentioned that I will be doing many more similar lists. This time I have decided to compile some of the best female anime characters out there who sport brown hair. Well, brown is a kind of neutral color. If you have been watching anime for some time, you would have seen how freaky the producers and creators get with their color composition. Certain anime characters are just walking triggers for putting the audience into a color induced frenzy! Compared to them, brown is much more subtle, and kind of meh. But, don’t worry. These characters aren’t, and they look great with their brown hair. So, here’s the list of top anime girls with brown colored hair. 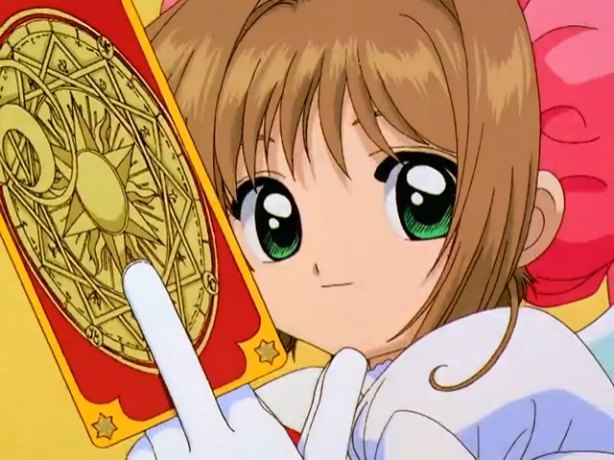 Let’s begin with some magic/fantasy genre anime. Sakura Kinomoto is the main protagonist of the anime series ‘Cardcaptor Sakura’. Sakura is a 10-year-old girl who one day ends up finding a magical book of cards and unintentionally sends the cards flying all over the world. Since the cards can be dangerous to humans and the Earth, she needs to recapture all the cards using a magical key. This gives her the title of ‘Cardcaptor’. Sakura is a cute little girl and has brown hair. She is very cheerful and loves cheerleading. After the cards are scattered she needs to learn magic to be able to seal them back in the book. Her best friend is Tomoyo Daidouji who helps her along the way. 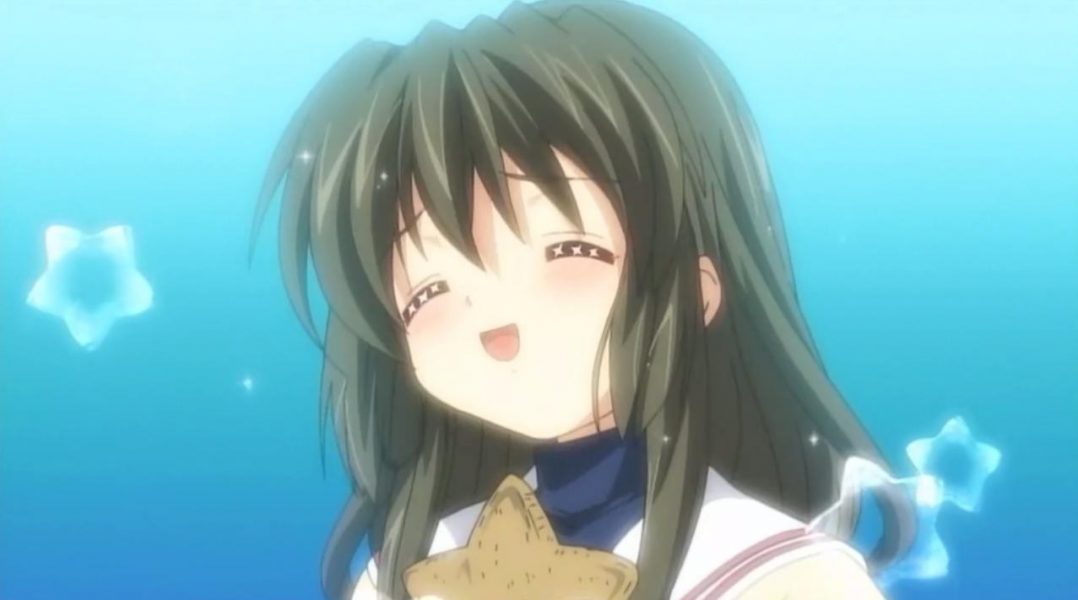 ‘Clannad’ is a slice of life genre anime. It does have an underlying supernatural theme too. The main protagonist of the anime is Tomoya, who thinks everything in life is dull and he isn’t someone special. He thinks that in the future he will amount to nothing. But then he ends up meeting a girl named Nagisa who due to sickness had been held back a year. She ends up uplifting Tomoya’s life who decides to help Nagisa and her friends through their obstacles. Fuuko Ibuki is one of the characters of the anime. She appears to be a cute little girl whose favorite animal is a starfish. She loves them a lot and sculpts them on wood. 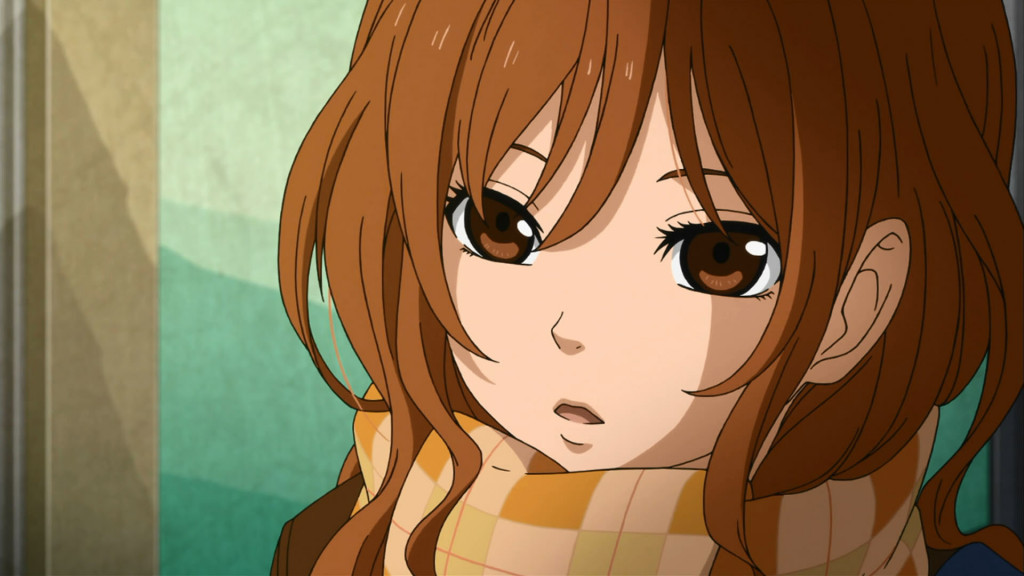 ‘Tonari no Kaibutsukun’ is another slice of life anime series. It is also a romantic comedy set in a school. The main characters of the series are Shizuku Mizutani and Haru Yoshida. Both are kind of similar when it comes to having friends. None of them have many friends and they mostly live alone. But one day they end up meeting and Haru decides to become Shizuku’s friend and confesses his feelings. Natsume is one of the best characters in this anime series. She coerces Shizuku and Haru to be together. She is quite pretty and her hairstyle really suits her personality. Natsume has brown colored long hair giving her a spot on this list. 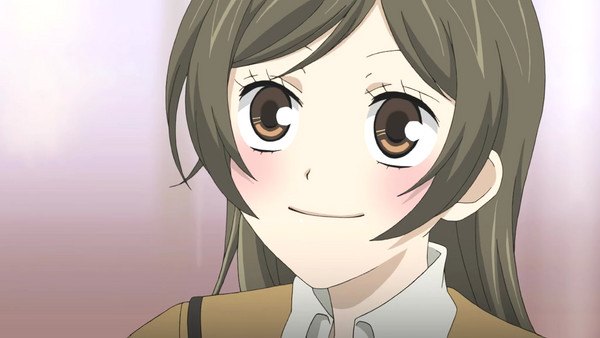 It’s sometimes hard for me to follow certain fantasy anime involving Gods and familiars. I don’t really get it. ‘Kamisama Kiss’ is one such anime. It tells the story of a girl who became homeless due to her father’s huge debt. Somehow she ends up meeting a man who takes her to live in a shrine. Well, long story short, she is now on the path to becoming an actual God and needs to find a fox person Tomoe who is a familiar. New trouble starts brewing along the way, which she must overcome in order to keep fulfilling her divine duties and have a roof to live under. That girl is Momozono Nanami. She also ends up falling for her familiar. In addition to this, she has beautiful brown hair. 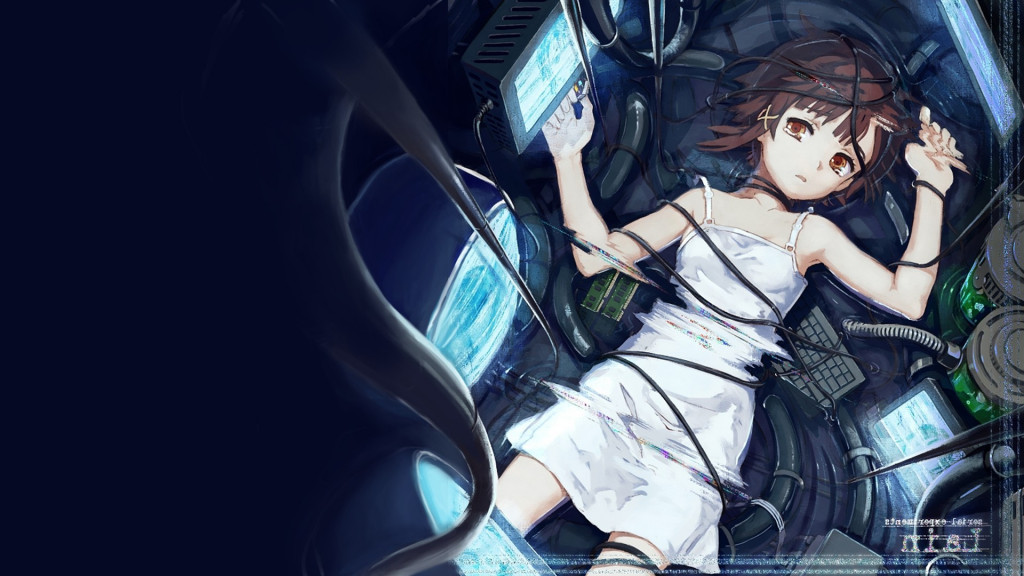 Lain Iwakura is the main character of the sci-fi and psychological genre anime series ‘Serial Experiments Lain’. She is an awkward 14-year-old girl who doesn’t indulge much in technology. Her normal life is turned upside down when she and many of her classmates get an email from a fellow classmate named Chisa Yomoda. The weird thing about this is that Chisa had committed suicide. Now, after clicking on the email Lain is taken into the wired world of communication. Slowly, she begins to notice strange happenings around her and some people dressed in black following her. They sometimes stop her to ask some questions and have lots of information on her. She needs to solve this mystery to find out the truth about what is actually happening. 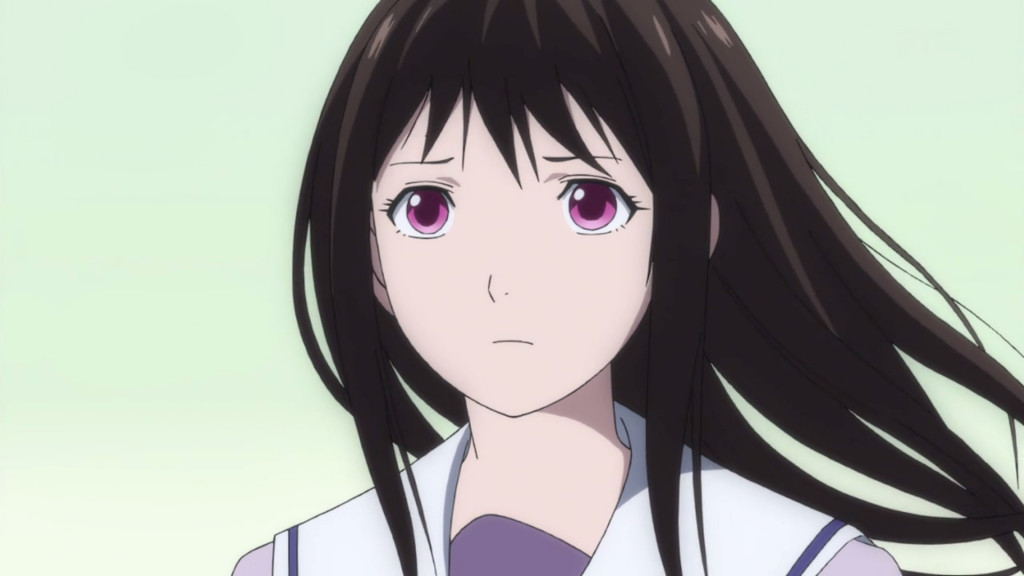 ‘Noragami’ is a supernatural/action genre anime. The main protagonist of the anime is Yato who is a minor deity with a bold aspiration. He wants to have millions of followers. But that is actually hard to achieve since he does not even have a single shrine in his name. So, to get people to follow him he ends up doing odd jobs for people. But his weapon partner doesn’t like his master and decides to leave him, leaving him to fend for himself. One day Yato nearly survives a car accident being saved by a girl. That girl is Iki Hiyori who though not severely hurt, now has a soul that can leave her body. She asks Yato to fix this problem but to do so he needs to have a weapon partner. So, Iki decides to find him one. There starts the adventure. Iki is a pretty girl with nice brown hair. 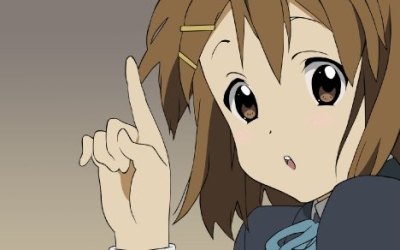 This is another anime set in a school. The main character of this anime is Yui Hirasawa. She is a carefree girl. This makes her sign up for the band named ‘Light Musical Club’. But there is one problem, she doesn’t know how to play any musical instrument. This disheartens the members of the band as they desperately need a band member to start practicing for the upcoming school festival. So, they persuade her into signing up and start practicing as a guitarist. But Yui faces a lot of problem in trying to balance her school work and guitar practice. Will she be ready before the festival? Will her band get to have their debut? 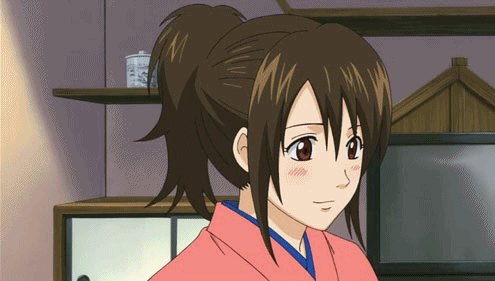 ‘Gintama’ is a samurai-themed sci-fi anime series. The main characters of the series are Gintoki Sakata, a boy who still has the heart of a samurai, Shinpachi Shimura, a boy who is a jack-of-all-trades, Kagura a girl who possesses an umbrella and Sadaharu, a dog. The series is set in a time when aliens have attacked and taken over Japan and outlawed carrying of swords making the samurai a person to be looked down upon. In this, setting a group of the above-mentioned people perform odd jobs which mostly get them into troubles. But where does Shimura Otae fit in? Well, she is the older sister of Shinpachi Shimura and is a cabaret dancer. She is also a badass as she can fight and protect herself. She is pretty and has brown hair. 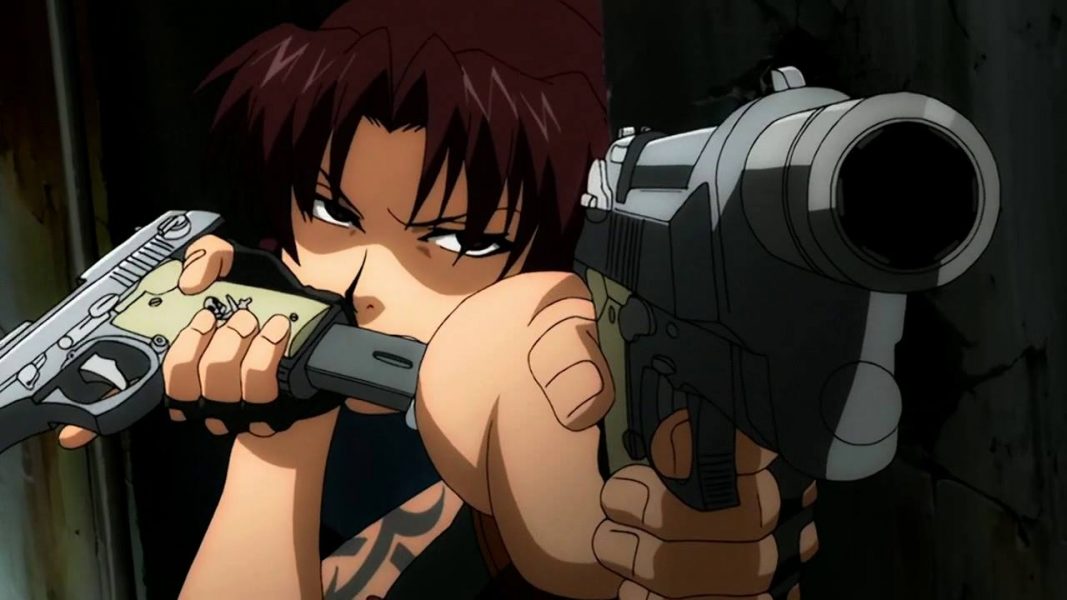 Revy is one of the main characters of the action anime series ‘Black Lagoon’. While watching this series I felt that I was watching a Hollywood film in anime style. The plot is quite good and refreshing and set in a place in Thailand called Roanapur which is dubbed as a crime haven. In this place operates a group of mercenaries named Black Lagoon. Revy is a member of the group. They end up kidnapping a businessman from Japan thinking of getting some ransom. But the boss of the man abandons him. Now, he himself must become a mercenary to survive in this harsh and unforgiving place. Revy is one of the main members of the group and she is merciless when it comes to killing. She wears a sexy outfit and has brown hair. 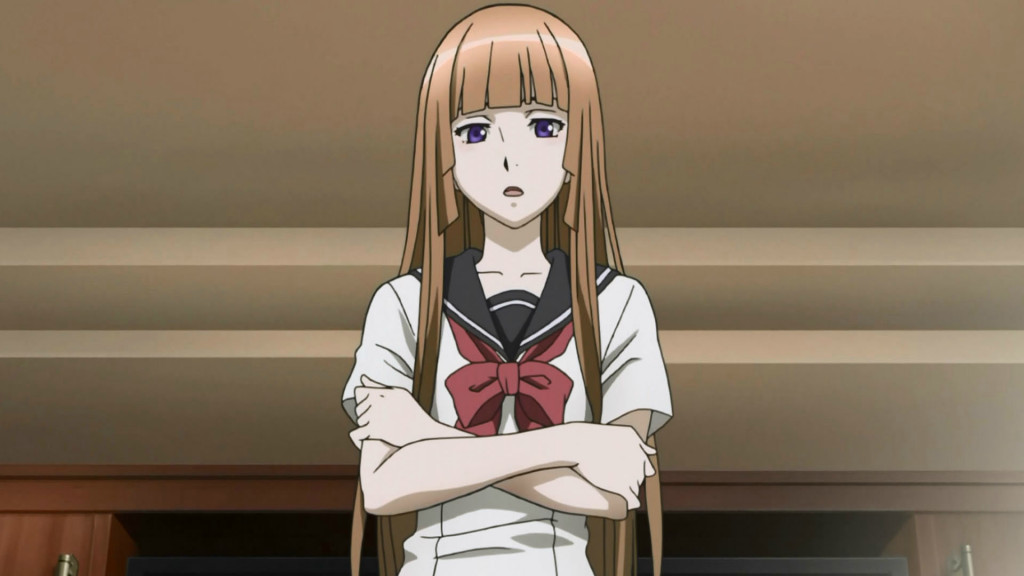 Fuwa Aika is one of the most beautiful female characters in anime having brown hair. I mean, just look at her. Her hair is long brown cascade flowing all the way to her hips. We don’t actually get to see her in real time since she is shown to be dead at the beginning of the series. But we can piece together an image of her. Her brother loved her a lot and wants to solve her mysterious death and find the person responsible for it. He is also helped by her boyfriend Yoshino. 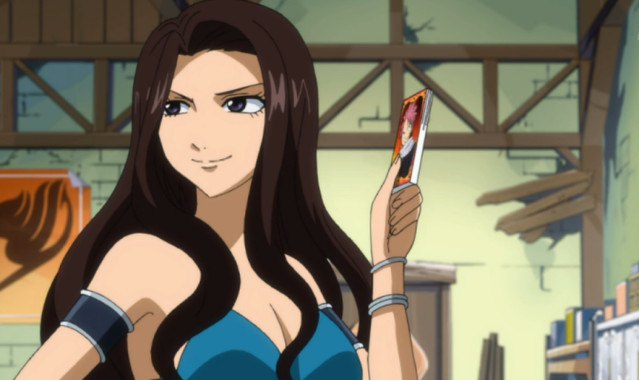 Well, it’s time for some sexy anime female character who sports  brown hair. It is Cana Alberona from the fantasy/adventure genre anime series ‘Fairy Tail’. Though her hair color has seen some changes, brown has remained constant over the years. She wears a revealing outfit which very much complements her voluptuous figure. Aside from her physical beauty Cana is very talented and aspires to become an S-class mage and is the daughter of one of the most famous S-class Fairy Tail wizards, Gildarts Clive. She loves her friends and wants to protect them. 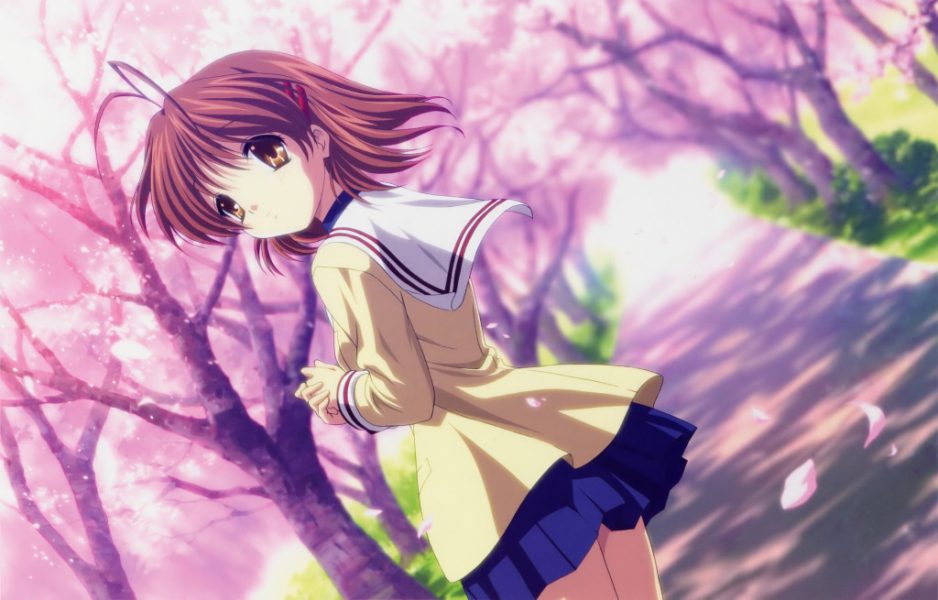 The last entry on this list is again from the ‘Clannad’ anime series. Nagisa Furukawa is one of the main characters in the anime series. She cares most about her grades and seldom has any friends and is mostly alone. She ends up meeting Haru who is similar to her when it comes to making friends. The two start getting closer after Haru initiates a friendship between them. Fuuko coerces the couple to get much closer. Though Nagisa isn’t a sexy belle, she is a cute one indeed. She also has short brown hair with bangs on her forehead.