11 Anime You Must Watch if You Love 7 Seeds

Based on a bestselling manga, ‘7 Seeds‘ has had a lot of hype around it since it was first announced. While many were excited about the anime, a lot of manga readers were highly concerned about how it would turn out. ‘7 Seeds’ has a strong start where the characters wake up on a mysterious island and realize that all this while, they’ve been part of a fail-safe project known as the “7 Seeds.” In a world that has changed in ways more than one, the various groups of survivors try to adapt to their surroundings whilst discovering all that has changed since they last left it. Initially, the show seems to have a lot in common with the American TV series ‘Lost‘ where the characters find monsters on a secluded island and also run into a bunk full of food on it. But after a while, it goes in a very different direction with several interesting plot twists.

Apart from its interesting story that slowly builds upon its mystery elements, even the characters and their interactions are quite intriguing. As the mystery further evolves, the anime makes the use of flashbacks to further add to the development of the main characters. So at the end of the day, ‘7 Seeds’ can be regarded as quite an enjoyable anime, considering how hard it is to execute something that has such a complex science-fiction-based plot. What’s really disappointing, though, is its animation style. Now it’s not downright bad, but it certainly is nowhere close to Gonzo’s other creations such as ‘Gantz‘ and ‘Afro Samurai‘.

So I believe that for the most part of it, the anime did manage to get the attention of fans even though it may not have completely met the expectations of many of them. If you are drawn to stories that explore natural disaster aftermath and post-apocalyptic world, then we’ve got a special compilation for you that you must check out. Here’s the list of best anime similar to ‘7 Seeds’ that are our recommendations. You can watch several of these anime like ‘7 Seeds’ on Netflix, Crunchyroll or Hulu. 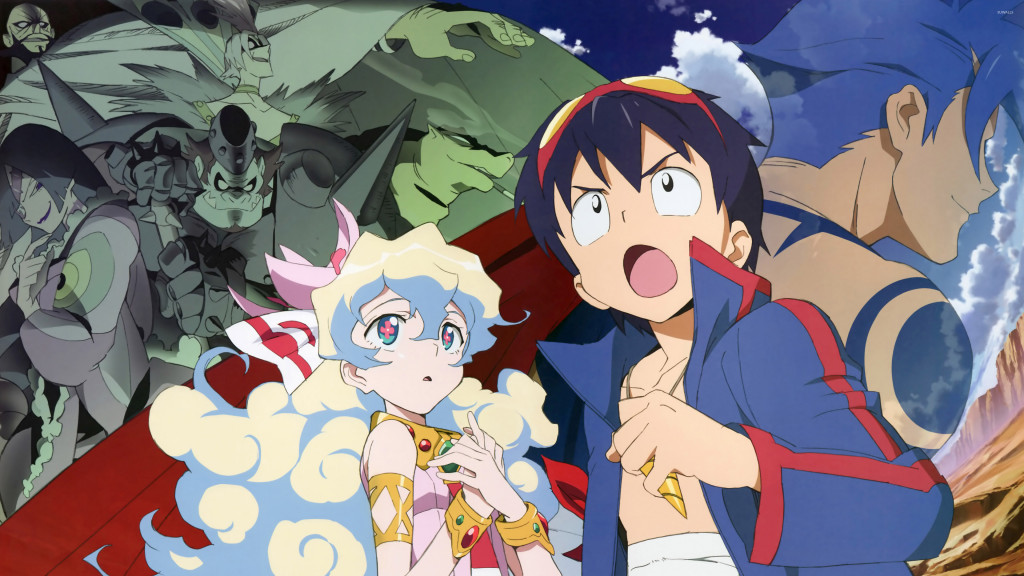 Ages ago, the entire human race was terrorized by “Beastmen” who took over the whole surface of the Earth. The few surviving humans were forced to move underground and form their own communities there. These communities can barely interact with one another and going back to the surface is not at all option for them. One day, a young badass delinquent named Kamina decides to go to the surface and he invites his younger brother Simon to come with him. The two boys meet a girl named Yoko on the surface who helps them battle the beasts in order to reclaim their rights on a planet that once belonged to them. ‘Gurren Lagann‘ has an amazing story and is also packed with some great action scenes. 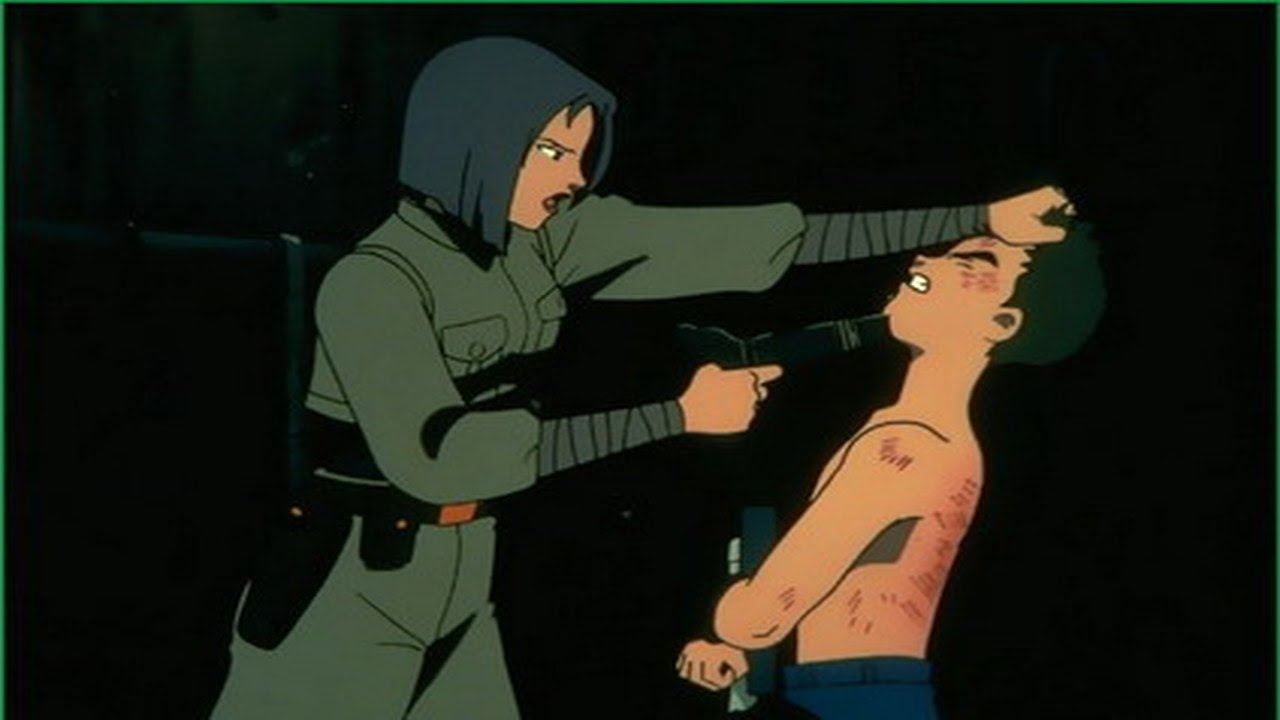 ‘Now and Then, Here and There’ is an Isekai anime from the late 90s that revolves around a boy named Shuuzou Matsutani. While coming back home from school one day, he runs into a strange girl named Lala-Ru. After this weird encounter, he gets transported to an alternate world where the scarcity of water is one major issue and a huge war for survival is going on. When Lala-Ru is kidnapped and held as captive, Shuuzou must somehow learn to adapt to this new world and save Lala-Ru to change the reality of this alternate world. 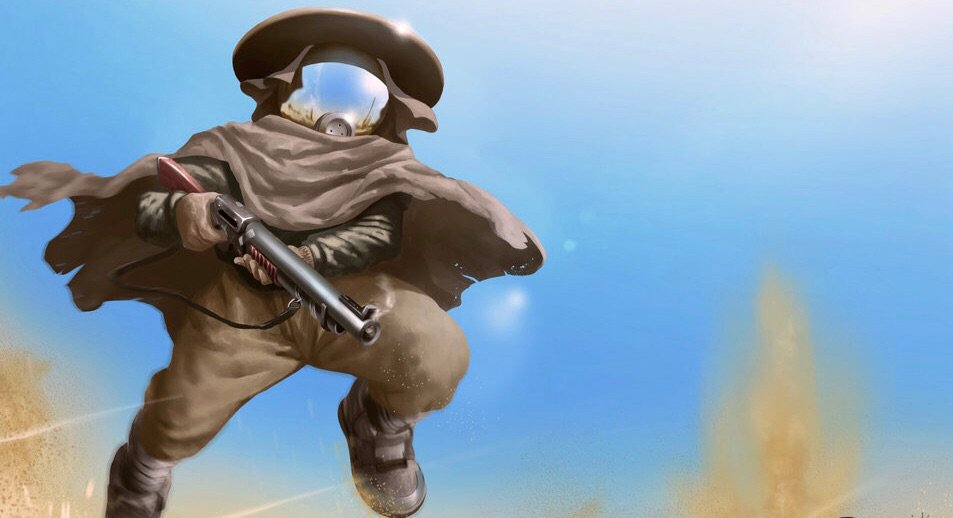 Post a nuclear disaster, the whole of Japan is nothing but a wasteland that’s like a long stretch of an endless desert. Only a few have managed to survive the disaster and even out of these survivors, only the “fittest” are able to live in the barren lands. One of these survivors is a little guy who is commonly referred to as the “Desert Punk.” He is willing to do anything for the right price and is somehow able to hold on to his life no matter what happens. Kanta Mizuno is his real name and in a world where one wrong move could get you killed, he survives solely through his quick instincts and agility. 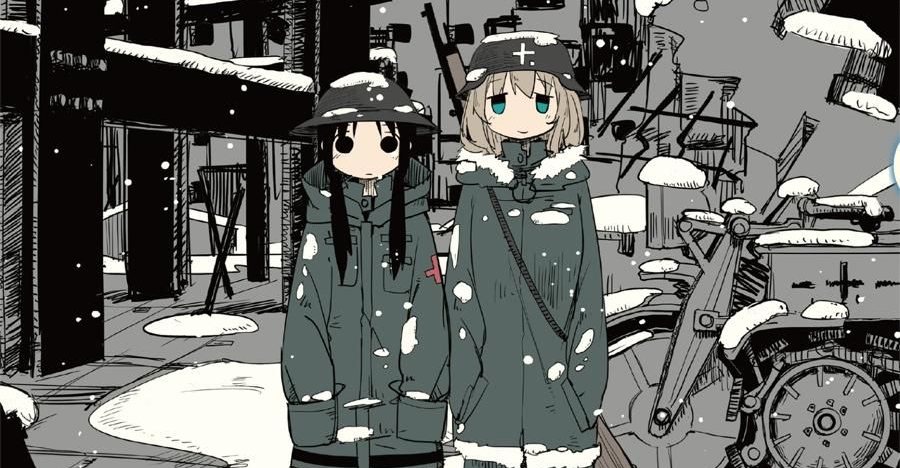 Two very cute girls named Chito and Yuuri are placed in a very dark setting where they are the sole survivors of war. They roam around in the ruins of the city to hunt for food and water on their motorcycle. While they do this, they contemplate the world around them. They are often crushed down by their feelings of loneliness and depression, but the only thing that keeps them strong is each others’ company. The desolate world in this anime is portrayed in a more adventurous style, which lightens up its dark tone and makes it quite enjoyable. 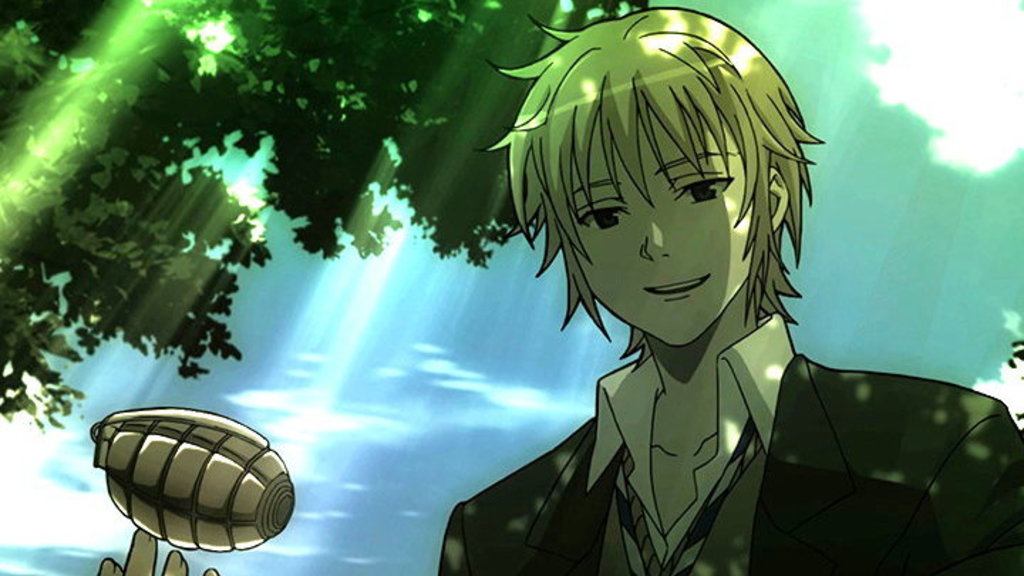 Set in the year 2016, a nuclear power plant meltdown leads to a big disaster in the city of Tokyo. A few years later, the city has been completely evacuated but when a distress signal is received from the city, the government decides to send three girls named Aoi, Ibara and Taeko to rescue those who are still stuck there. Together, the three girls are known as the Coppelion and what’s really strange about all three of them is that they walk around in this highly contaminated area with no protective suits on. 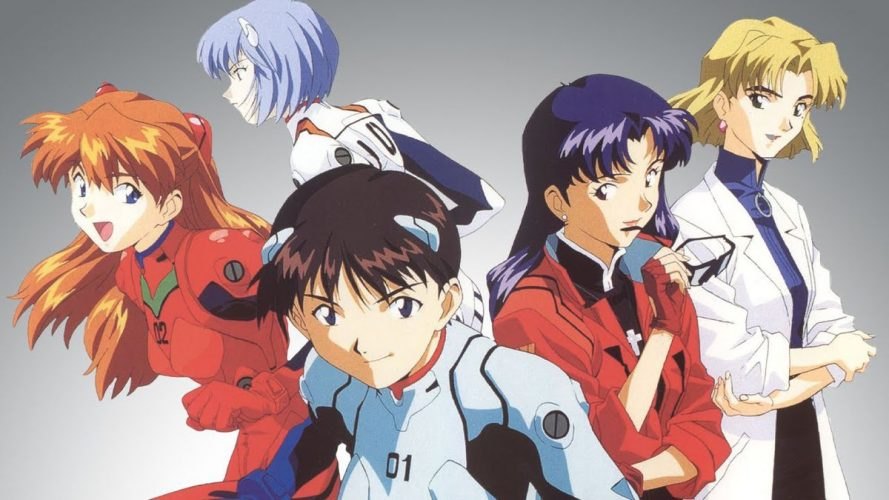 Set in the year 2015, the entire human race is on the brink of extinction after being attacked by Angels. Only the Nerv, a special government organization, is capable of defeating these angels by using giant machines called Evangelions. But operating these machines is not everyone’s piece of cake and only a few humans can synchronize well with them. This is where a 14-year-old boy named Shinji Ikari comes into the picture and gives humanity a new ray of hope. ‘Neon Genesis Evangelion‘ was quite popular when it released in the 90s but over the past few years, it has received an iconic status. And now that it is available on Netflix as well, I don’t see a reason why any anime fan should miss out on it.

‘No. 6‘ brings the story of a world where, after the events of a huge war, mankind has established itself in small city-states. For the ones who found their way into these city-states, life is pretty good as long as they follow certain rules. Meanwhile, the ones outside these city-states are just rotting themselves to death with no belongings or food to sustain themselves on. When a boy named Nezumi comes to Shion for help, Shion does not think twice and lets him stay with him for a night. But this one night changes everything for him and his family. Just for breaking one simple rule, they’re all kicked out of paradise and are forced to live in a world that is no less than hell. 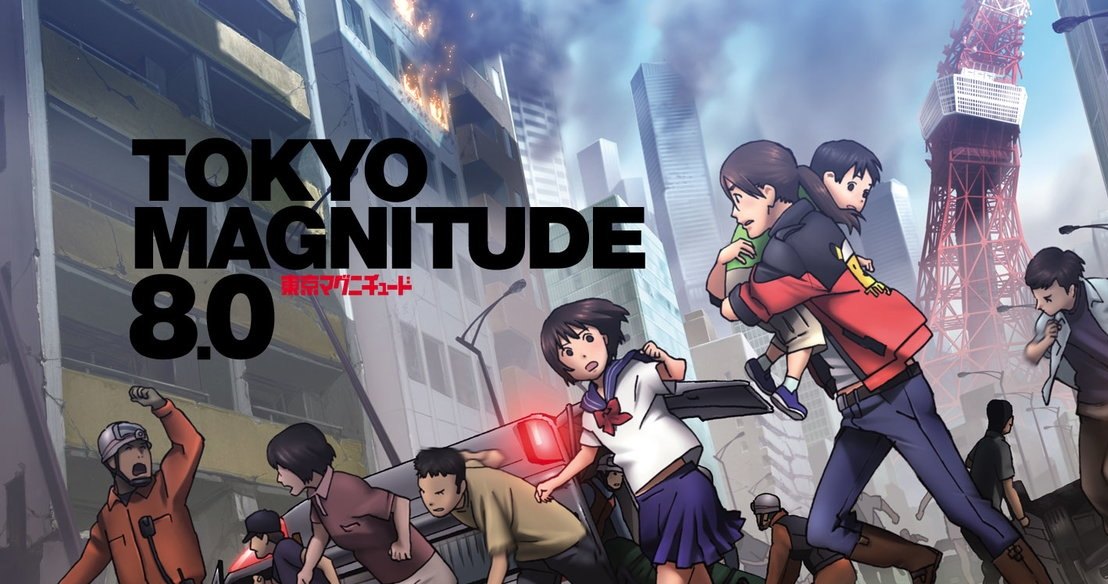 Earthquakes and Tsunami have been a vital part of Japanese history. So it comes as no surprise that several anime and films have been created to remind the viewers of these catastrophic events. ‘Tokyo Magnitude 8.0’ portrays the events of a massive earthquake that hits a heavily populated city. It focuses on the lives of three individuals who try to find their way back home in the ruins of a completely destroyed city. Almost like ‘7 Seeds’, this anime takes a very realistic approach towards the impact of a disaster and it will surely be relatable for someone who has gone through something similar. 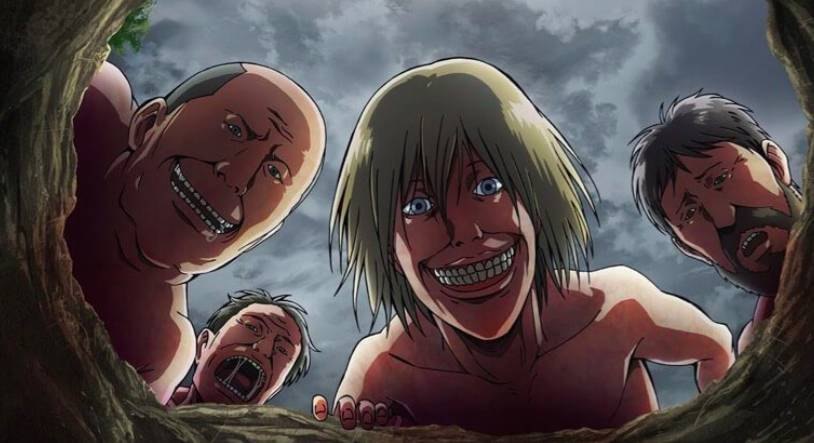 Almost a decade ago, the entire human population was wiped out after being attacked by giant monstrous creatures known as Titans. To protect themselves, the surviving humans built strong wars around themselves that protected them from the Titans. It’s been 100 years now and humans still live in the confinements of their safe walls protected from the Titans. But one day, a Colossal Titan shows up and starts destroying each of these walls one by one. This is when some mighty human warriors, called the Survey Corps, set out to kill the Titans before they’re able to penetrate all the walls. One of these Survey Corps is Eten Yeager, who has always dreamt of slaying the giant monsters and now that it has finally come true, he is determined to avenge the death of his loved ones. 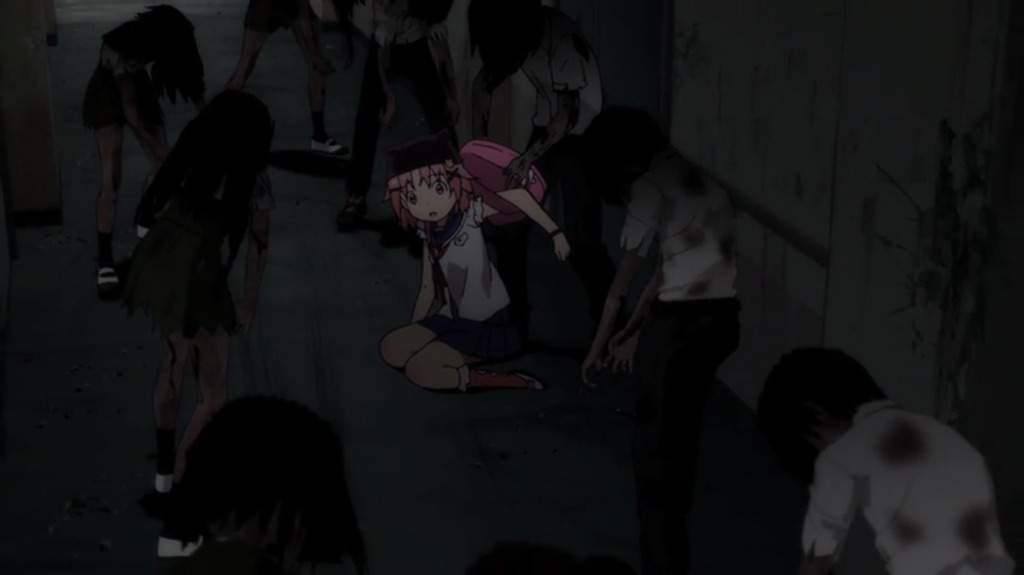 Takeya Yuki just loves school and luckily, she gets to enjoy her school life to the fullest by staying in it all the time. Along with her, four other girls are a part of the Megurigaoka High School’s School Living Club and they never leave their school. But while Takeya is too busy enjoying their club activities, she fails to understand the reality of the whole situation. The School Living Club is nothing but a self-created fantasy that helps them deal with the depressing reality of the zombie apocalypse that has destroyed the world outside. 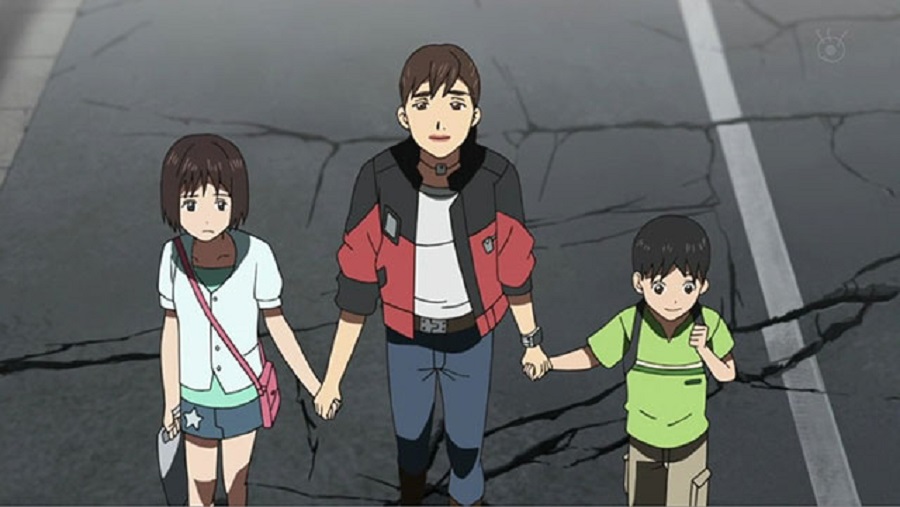 ‘The Day the Earth Moved’ is an anime movie based on the tragic events of the 1995 Kobe/Hyogo-ken-Nanbu Earthquake, which left close to 300,000 people homeless and even killed more than 6000 people. The anime tells the depressing story of a group of friends who are able to survive the earthquake but are left broken by the aftermath of the event. They stick together and help each other deal with their personal losses. ‘The Day the Earth Moved’ is a deeply moving anime that gets as close to reality as an anime can ever be with its depiction of a disaster.

7 Anime You Must Watch If You Love Rent-A-Girlfriend

7 Anime You Must Watch If You Like Fire Force