7 Anime You Must Watch if You Love Charlotte 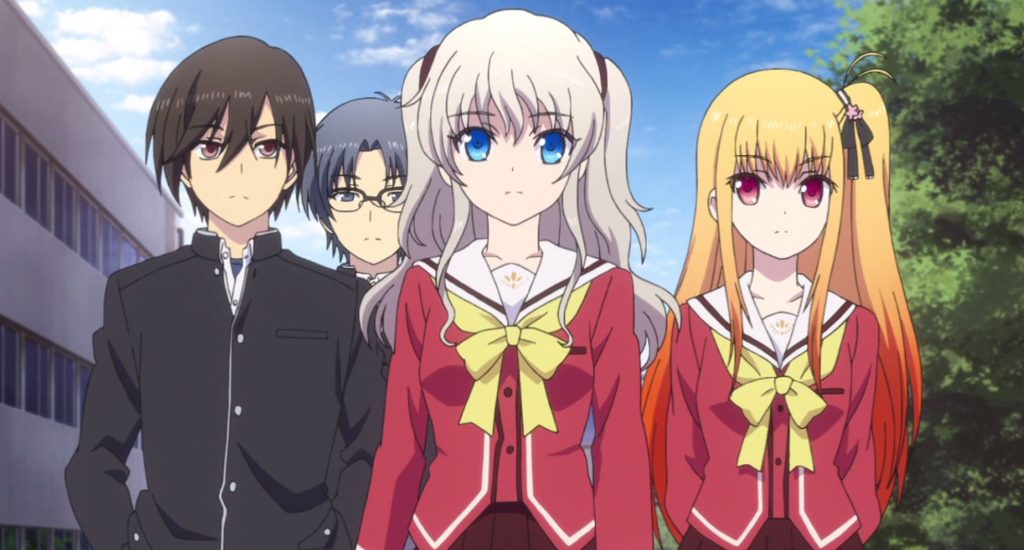 ‘Charlotte’ is a superpower-themed anime which takes place in a high school. It is one of the most entertaining anime ever made. The plot follows students who possess supernatural abilities. The protagonist of the anime is Yuu Otosaka, who has the ability to enter into other people’s minds. He obviously uses his powers selfishly and gains the highest grades, allowing him to enter a prestigious high school. But a girl named Nao Tomori catches him using his powers and forces him and his sister, Ayumi, to transfer to a school which has similar students. Nao leads the student council in this school; his aim is to find and stop people with abilities from using their powers selfishly. Tomoya is now one of the members of the council and needs to follow through on their aim.

The anime raises an interesting question: what would one do if given special powers? Will they use it selfishly for their own good or make sacrifices for the greater good? With all that said, here’s the list of best anime similar to ‘Charlotte’ that are our recommendations. You can watch several of these anime like ‘Charlotte’ on Netflix, Crunchyroll or Hulu. 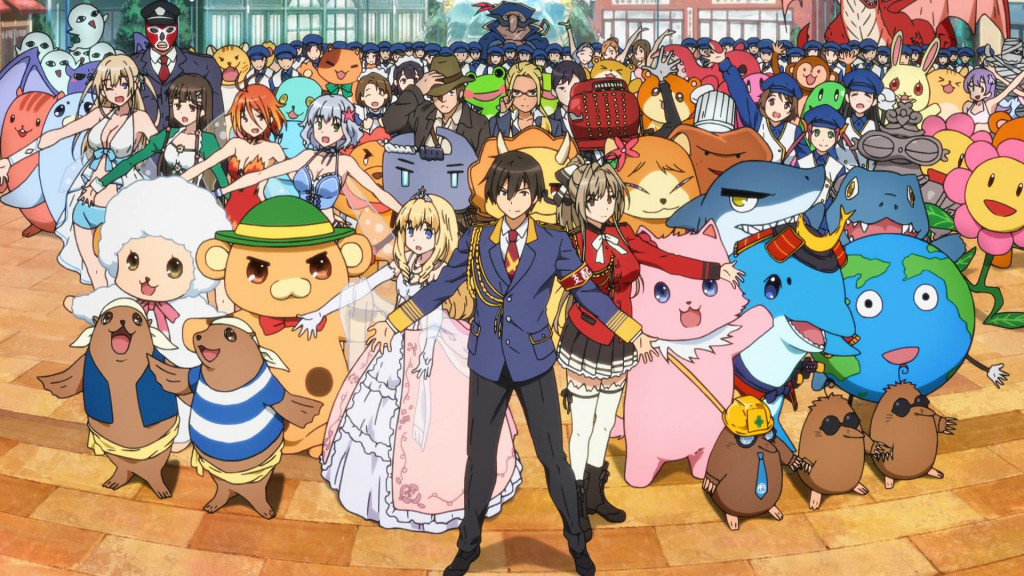 ‘Amagi Brilliant Park’ is quite similar to ‘Charlotte’. For instance, both anime has a protagonist who is narcissistic and has superpowers (magical ability in case of Seiya from ‘Amagi brilliant Park’). Both characters have some limit to their powers. While Yuu can use his powers only for 5 seconds and with the person within the range of his sight Seiya can only use his powers once on every person. Both Yuu and Seiya are recruited to use their skills for the greater good. Isuzu Sento invites Seiya Kanie to an amusement park. Seiya thinks that the beautiful girl has invited him on a date but it is not true. Rather Seiya is being recruited by Sento and Princess Latifa to be the park manager. He needs to get around 500,000 guests to the park within three months. Failing to do so will result in the park being shut and the land sold to a greedy real-estate businessman. Seiya learns that the park is home to magical creatures who derive energy from people having fun. Now, Seiya must give it his all to save the park. This is a highly entertaining anime with around 13 episodes (yeah, easily ‘bingeable’). 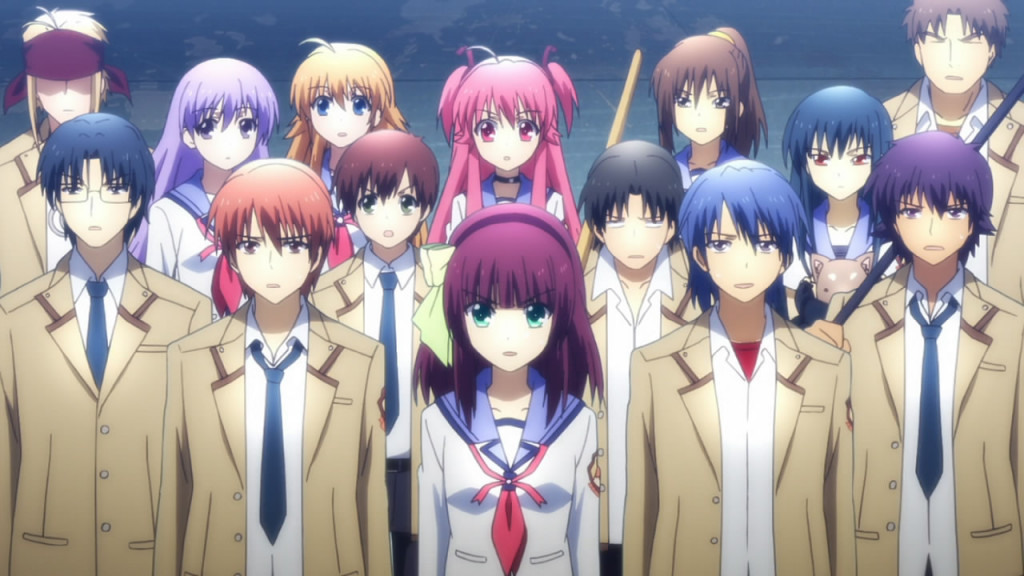 The main reason for putting this anime on the list is because it is made by the same creator of ‘Charlotte’. Also, like ‘Charlotte’, it has a supernatural theme. ‘Angel Beats!’ is an entertaining anime which will keep you engrossed till the end. Part of its entertainment value comes from the array of characters who play a part in the advancement of the plot. The series is dramatic, funny and is set in a high school setting like ‘Charlotte’. The protagonist, Otonashi, is dead and is now in the afterlife. The only thing he can remember about himself is his name. He encounters a girl, Yuri, who carries a rifle. She briefs him about the afterlife and asks him to join the Shinda Sekai Force, or SSF for short. The purpose of this group is to wage war against the evil Tenshi. Otonashi does not believe her claims and attempts to contact Tenshi. But his meeting does not go as planned and he ends up joining the SSF. Even then he feels gravitated towards Tenshi. The visuals of the anime are quite pleasing too. 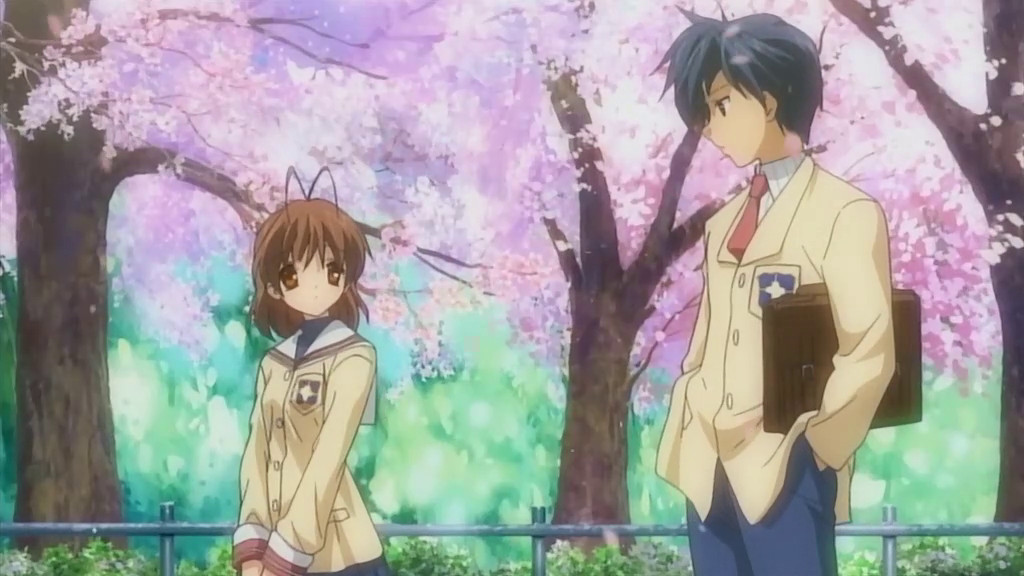 The creator of ‘Clannad’ is Jun Maeda, who is also the creator for ‘Angel Beats!’ and ‘Charlotte’ and this is one of the reasons why this anime is included on the list. Also, like ‘Charlotte’, ‘Clannad’ has a supernatural theme, though it isn’t as prominent as in ‘Charlotte’, where basically the main characters have what we can call superpowers. This show also takes place in a school setting and has a lot of drama. If you have a PlayStation, you should check out the visual novel on which the anime is based on.

The male protagonist of the anime is Tomoya Okazaki. He is a troublemaker and does not believe in himself and thus passes time lazing around with his friend. One day, he stumbles across a girl who suddenly exclaims Anpan! Tomoya later learns that the girl is Nagisa Furukawa and she tries to motivate herself by exclaiming her favorite things. Nagisa claims that they are friends now, even though Tomoya brushes her off. But as time passes, Tomoya finds himself drawn to Nagisa until finally, he befriends her. He learns that she has been held back a year due to some sickness and is hoping to revive the drama club. Tomoya decides to help Nagisa in her endeavor along with her four other friends. Maybe he will learn that there is much more to life than he initially thought. 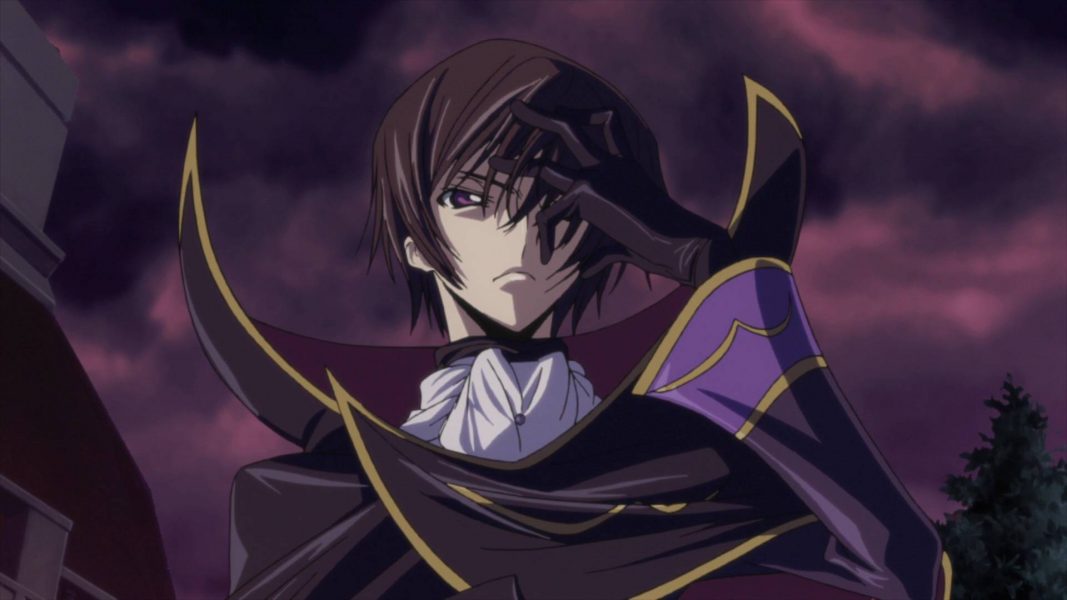 Let’s get some anime with superpowered characters in here. We start with ‘Code Geass: Hangyaku no Lelouch’. It is a really popular anime and has a high school setting. Like in ‘Charlotte’, the main character, Lelouch Lamperouge, in ‘Code Geas: Hangyaku no Lelouch’ has superpowers and can choose to use them for a personal endeavor or for the greater good. The anime is also great for people who like the mecha genre. It takes place in a world where a military nation, empire of Britannia, dominates other countries. Japan is one of its victims and is now renamed to Area 11. But soon, a rebellion starts in Area 11 to oppose the forces of Britannia. Lelouch Lamperouge, a student from Britannia, ends up stumbling upon a fight between Area 11 rebels and forces of Britannia. Thankfully, a mysterious girl appears and saves him. She also gives him the power of the kings, Geass, which grants Lelouch the power of absolute obedience. Now, he uses his powers to get revenge on Britannia as the masked vigilante, Zero. 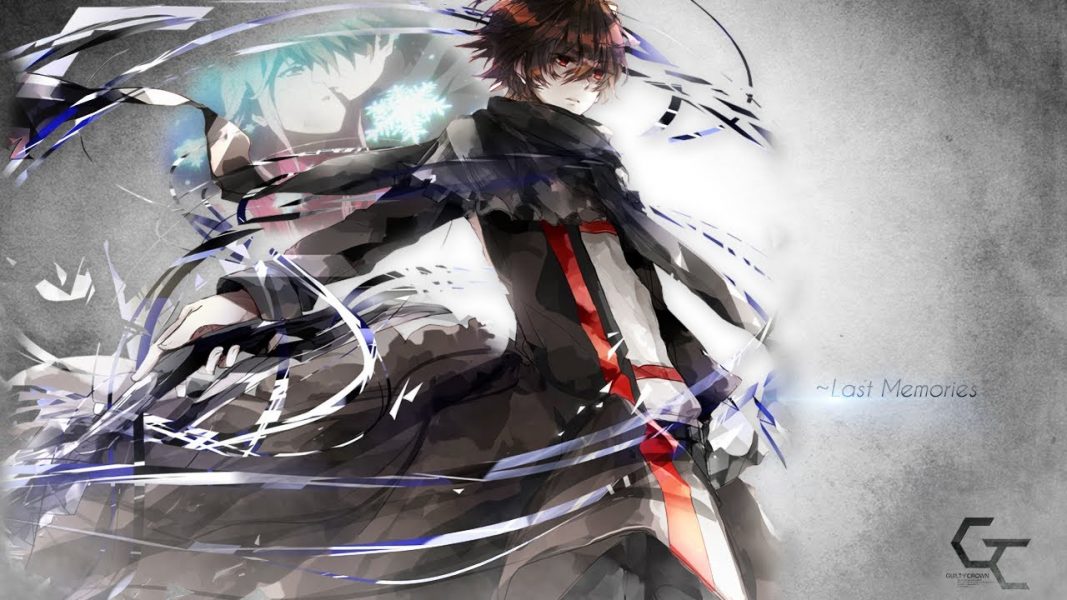 ‘Guilty Crown’ again is an anime dealing with high schoolers. The main character gains superpowers and has the chance to use them for the greater good. The premise of the anime is pretty much similar to ‘Code Geass: Hangyaku no Lelouch’. I mean, it is basically ‘Code Geass’ in a different setting. This anime again takes place in Japan. It is the year 2039 and the outbreak of a virus wreaks havoc in the nation. Law and order become null and void. Then a military faction, GHQ, emerges deciding to take control of the matter and restore order. There is basically no contest to their authority other than the group of rebels, Funeral Parlor, led by the infamous Gai Tsutsugami.

Inori Yuzuriha is one of the strongest members of the group. During one of her missions, she stumbles upon the weak Shuu Ouma which ends up in him gaining the power of the kings. Now, suddenly becoming one of the key factors in the friction between the Funeral Parlor and GHQ, Shuu finds himself being dragged to the very core of the struggle. Will he be able to liberate his country from the tyrannous reign of GHQ? 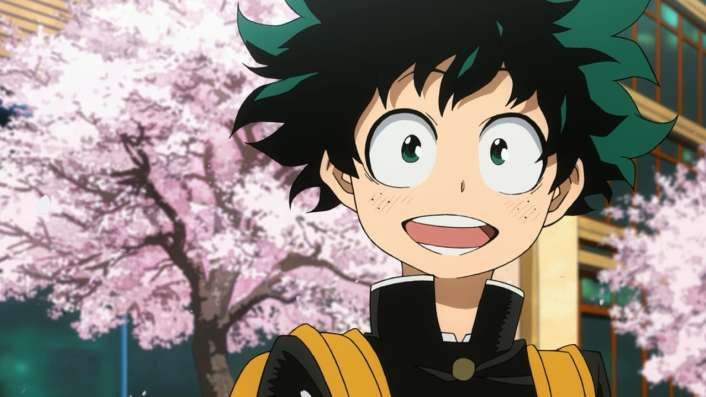 We know that ‘Charlotte’ revolves around groups of students having superpowers; and we cannot have a discussion about anime having high schoolers possessing superpowers without actually talking about ‘Boku no Hero Academia’. It is one of the best and most popular superpower-themed anime out there. The series is highly entertaining and the plethora of wonderful characters will keep you invested in it without losing interest.

As a result of evolution, humans have started to gain supernatural abilities, quirks. As with any ability, people start using quirks for bad. To stop them are the superheroes. Currently, most people have quirks and it is pretty rare for a person to be quirkless. But unfortunately, Midoriya Izuku is one of those rare humans which does not help the cause as he wants to be a superhero like his inspiration All Might. But after a chance encounter with his idol, he learns that All Might’s quirk can be transferred and he has deemed Midoriya worthy of his quirk. So, Midoriya starts training hard to be able to inherit All Might’s quirk before the entrance exams at the UA Academy, which is a hero training institute. 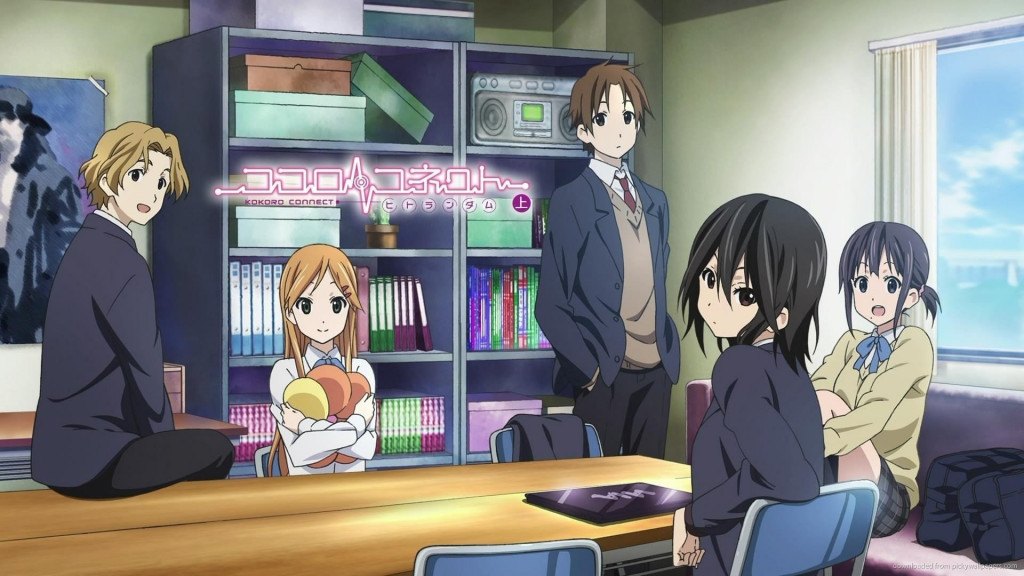 The visuals and the characters designs of the anime are great. The premise is quite interesting too. Taichi Yaegashi, Iori Nagase, Himeko Inaba, Yui Kiriyama, and Yoshifumi Aoki are misfits. They are not able to get into any clubs. So, they decide to band together and form a club — The Student Cultural Society. The club helps them get closer to each other and gain four good friends each. But then supernatural stuff begins to happen. It first happens to Aoki and Yui when they randomly switch bodies for a few moments. Then it hits everyone in the group and the five randomly start switching bodies. Everything’s fun and games at first but soon, they get too close to each other and learn each other’s secrets and unresolved emotional traumas. Will this help strengthen their bonds or will it drive them apart?