12 Anime You Must Watch if You Love ‘Fushigi Yugi’

As a kid, I was initially introduced to regular cartoons and remained unaware of what the term ‘anime’ meant until I approached my teens. Now, I am sure that all otakus will agree with the fact that there is one anime which pulled them into this intriguing and mysterious world for the first time. For me it was ‘Fushigi Yugi’, more commonly known as ‘Mysterious Play’. I had the experience of watching it first on TV in the late 90s when AXN had the courage to air animes with a touch of grown up themes.

The story of this Shoujo series revolves around an average middle school student named Miaka Yuki and her best friend, Yui Hongo. While wandering around the library one day, both friends accidentally come across a mysterious book called the ‘The Universe of The Four Gods’. On reading the book, they are both magically transported from present Japan to an ancient China as described in the manuscript. While Yui is lucky enough to be brought back into the present, Miaka gets stuck and eventually ends up as the priestess of Suzaku, the Vermilion Bird God. As a priestess, Miaka has to face the challenge of finding all 7 celestial warriors and summon Suzaku to grant 3 wishes, thereby trying to rescue the kingdom of Konan. Back home, when Yui tries to rescue Miaka through the book, it teleports her again but this time to a completely different land. Following a series of unfortunate events, she becomes the priestess of Seiryu, an evil nation that wants to destroy Konan. Fate pits the 2 best friends against one another as they become bitter rivals, competing for the love of Tamahome, a charming celestial Susaku warrior from Konan, and also in a violent race for who first gets to summon their nation’s god. An adventurous journey of friendship, love, fun and betrayal ensues, creating one of the most engaging anime series of all time.

The interesting thing about this anime is that it does not cater only to shoujo viewers but rather has something in store for everyone. If you haven’t watched it yet, I’d definitely recommend booking your next weekend and going for a quick binge of this 52-episode series. For those like me who have already watched it and are looking for something similar, here is a list of anime similar to Fushigi Yugi that are our recommendations and will help you skip your next google search. You can watch several of these anime like Mysterious Play on Netflix, Hulu or Amazon Prime. 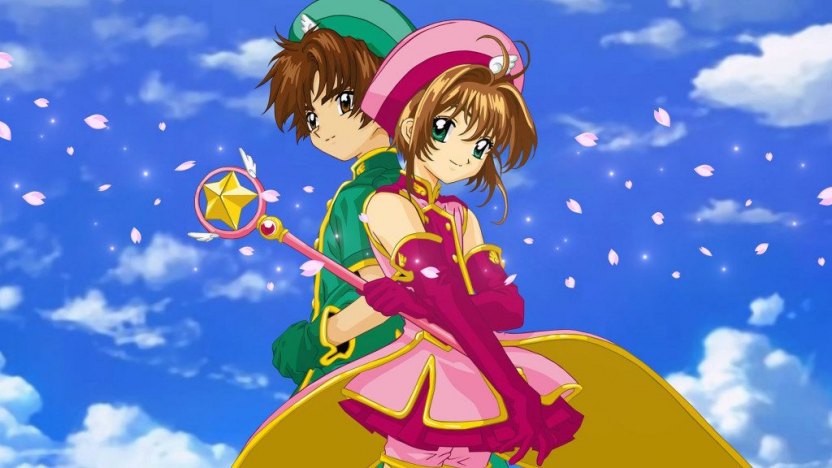 Just like ‘Fushigi Yugi’, ‘Cardcaptor Sakura’ revolves around the adventures of a young girl. Sakura Kinomoto, a 10-year-old school kid, stumbles upon a mysterious book in her basement and accidentally releases a set of magical cards out into the world. In doing so, she also awakens the guardian of the book, a magical beast named Keroberos (or Kero chan). Kero tells Sakura that the magical cards she released are actually ‘Clow Cards’ created by sorcerer Clow Reed. He also tells her that without a guardian or master, these cards pose great danger to all living beings. In order to restore balance and save the world, Kero appoints Sakura as the new ‘Cardcaptor’. Together with her best friend Tomoyo, Sakura embarks on a secret journey to retrieve all the cards while facing several kinds of challenges. 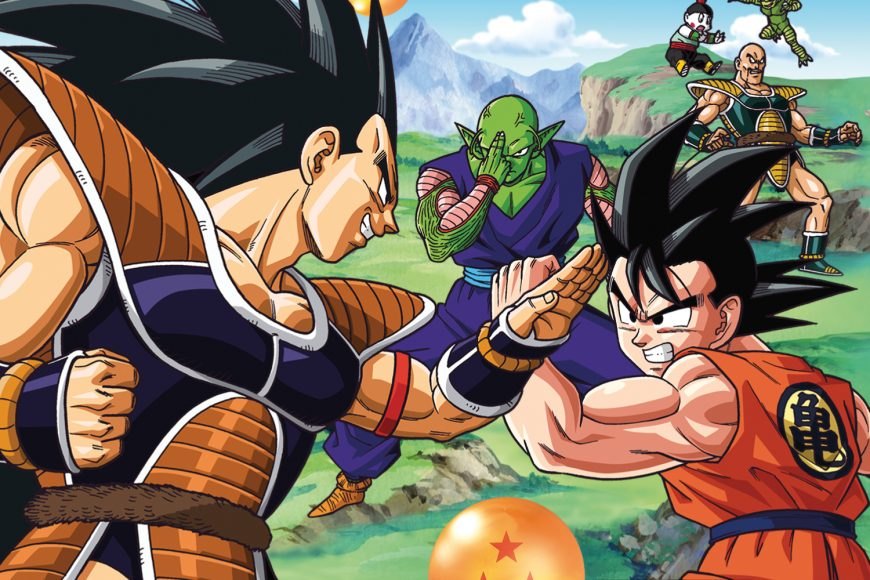 I know what you’re thinking: “What is Dragonball Z doing on this list?!”. Surprisingly enough, one of the most popular action/fantasy anime of all time shares quite a few similarities with ‘Fushigi Yugi’. The story focuses on Goku and a group of warriors who protect the world against powerful extraterrestrial invaders on a mission to destroy it. It also puts our heroes on a quest to collect a set of 7 magical balls or ‘Dragonballs’ that let them summon the eternal dragon god, ‘Shenron’, who grants their wish most of the times This is one anime you just cannot afford to miss! 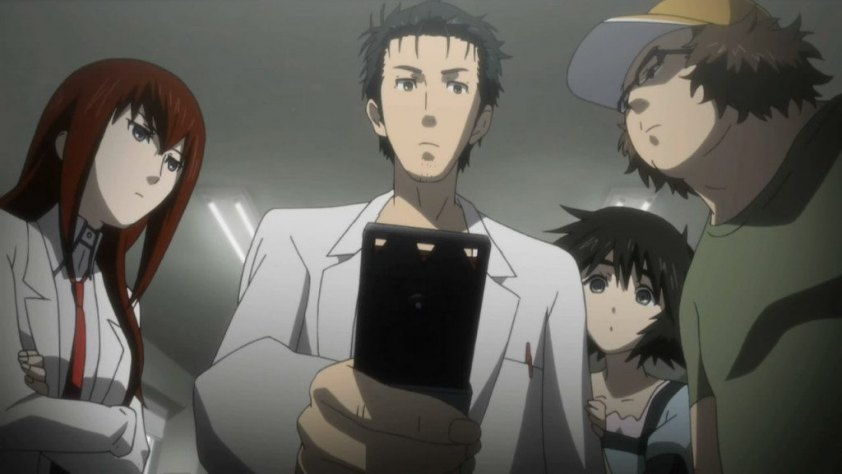 Although ‘Steins;Gate’ falls under a completely different category of anime, I personally find it sharing a few key similarities with ‘Fushigi Yugi’. Rintaro Okabe a.k.a ‘the mad scientist’, runs the ‘Future Gadget Laboratory’ in his apartment, along with close friends, Daru and Mayuri. In their lab, Rintaro and his associates conduct strange (read laughable) time travel experiments using a weird invention called the ‘Phone Microwave’. Their failed experiments yield no results until they accidentally uncover the fact that the ‘Phone Microwave’ can actually send emails to the past. Underneath all the scientific time travel mumbo, ‘Steins;Gate’ takes us through the significance of human relationships in the form of friendship and love. 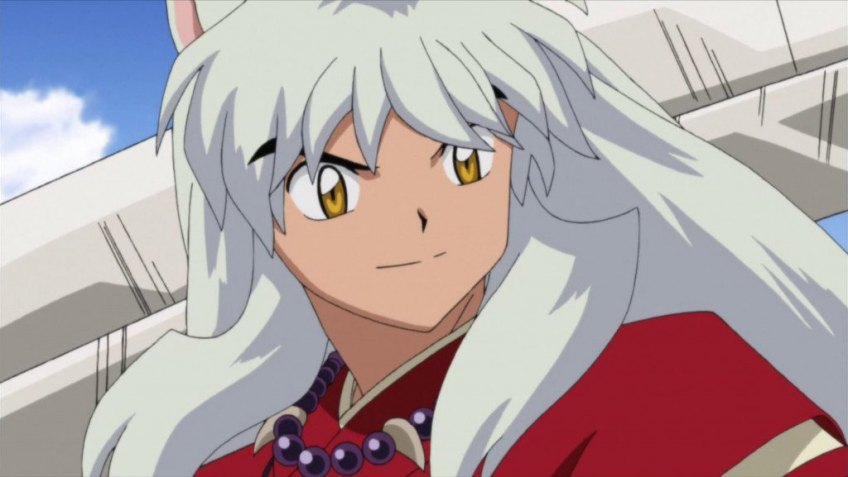 Another shoujo classic which gathered a huge fanbase in no time, ‘Inuyasha’ tells the story of a 15-year-old girl who is captured by a demon and taken 500 years back into ancient Japan, where Demons are severely feared by humans. Unfortunately for Kagome, she becomes the target for every demon as the wish-granting Shikon Jewel is reborn inside her. After getting into a fierce battle against a demon, Kagome loses the Shikon Jewel as it gets crushed and scattered in the form of shards. In order to recover these priceless shards, Kagome obtains the help of a half-human, half-demon hybrid called Inuyasha. On their journey, they also find more friends in the form of ‘Miroku’, the smart monk, and ‘Sango’, the demon slayer. Above all other similarities, it also shows us how completely opposing personalities can share great chemistry, be it through the bond of friendship or love. 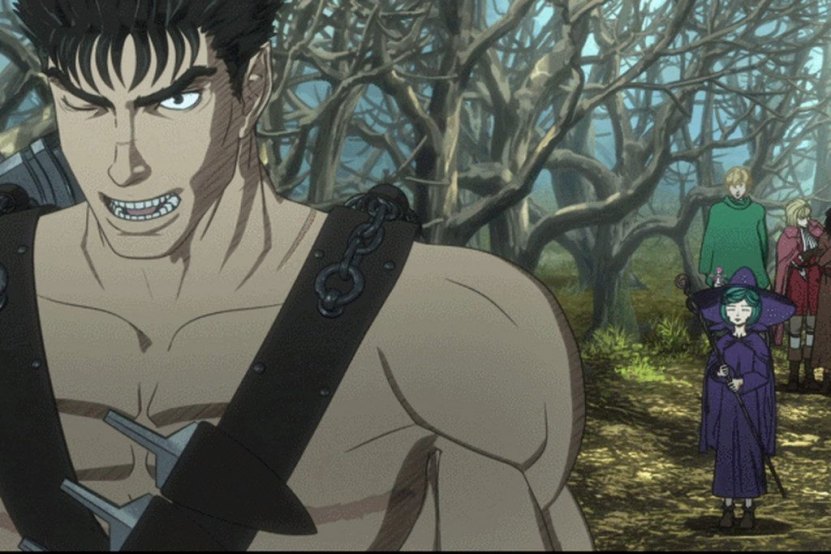 This anime follows the story of a wandering mercenary named Guts. It is a fearsome reputation that brings him into the attention of Griffith, an elite leader of a mercenary group known as ‘The Band of Hawks’. Guts is challenged into a battle and faces defeat at the hands of Griffith. This forces him to pledge himself and enroll as a part of Griffith’s group. Eventually, Guts becomes the raid leader of The Band of Hawks and Griffith’s most trusted ally. He also ends up saving Griffith and the others in the group from death on a number of occasions while risking his own life. Following a major twist, Griffith, who was once his friend and leader, deceives Guts and puts a huge target on him and the woman he loves. Now hunted by demons from other realms, Guts begins a journey to find out answers and destroy the man who took away everything from him. ‘Berserk’ shares a few common themes with ‘Fushigi Yugi’ in the form of love, betrayal, revenge and finding hope in unfortunate times. 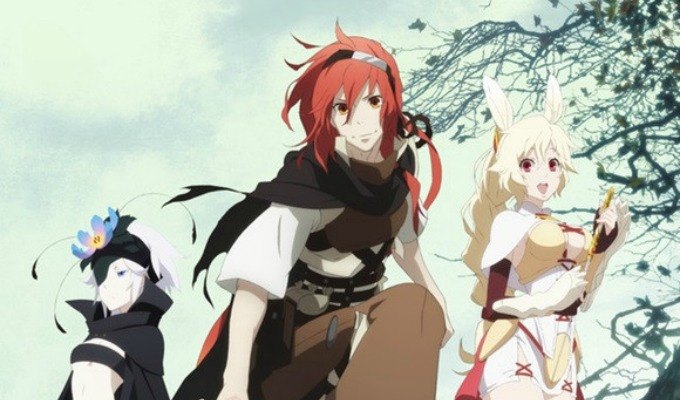 Adlet Mayer, the self-proclaimed ‘strongest man on earth’ is one of the chosen ‘Braves of the Six Flowers’. The group is destined to protect the earth against fiends who plan to turn it into hell. A series of mysterious events arise when all the six braves gather only to find out that there is a 7th impostor among them. When everyone suspects Adlet, he is forced to go on the run and take matters into his own hand. Our hero embarks on a journey to find the real impostor and a bid to gather the real six before it is too late and doom befalls the world. 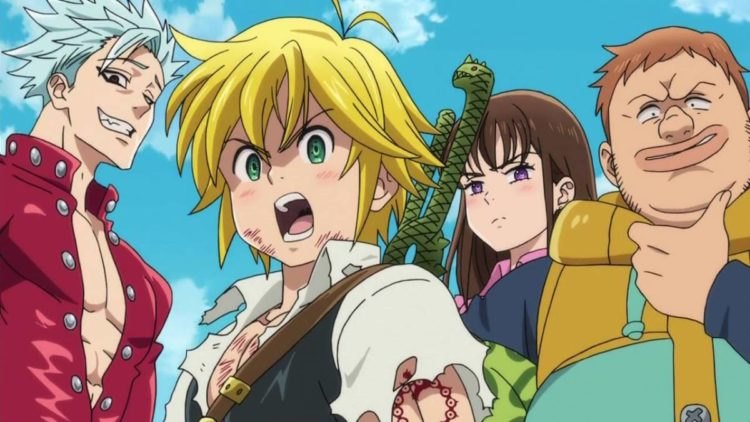 Similar to ‘Fushigi Yugi’, this anime follows the journey of a young girl who tries to ensure the safety of her kingdom. ‘The Seven Deadly Sins’ is a group of legendary knights who are feared by all the people of Britannia. When an alleged news regarding their plot against the crown arrives, they are eventually defeated by the Holy Knights. Even after their disappearance, rumors stay afresh of their existence and sighting. A decade later, tables turn when the Holy Knights overthrow the king and become unjust rulers of the kingdom. It is at this point that Elizabeth, the third, embarks on a quest to find and gather ‘the Seven Deadly Sins’ and seek their help in restoring order in her country. 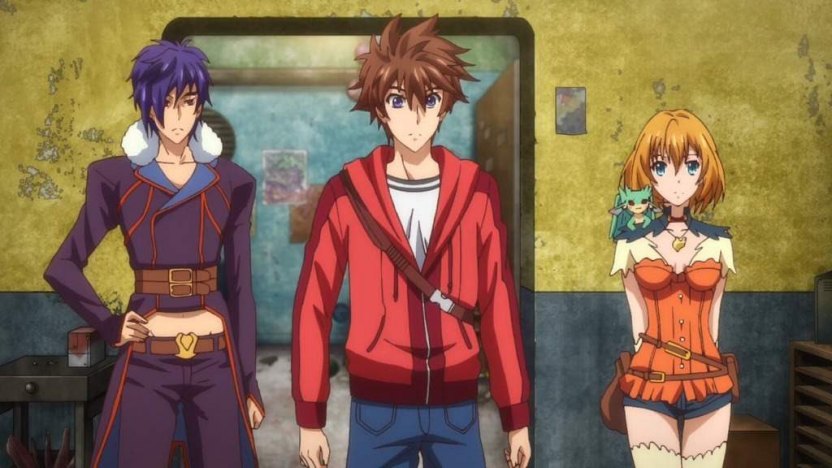 ‘Endride’ tells the story of Shun, a 15-year-old high school student whose accidental encounter with a magical crystal transfers him to a parallel universe (sound familiar?). Before planning his return back home, Shun must help Prince Emilio escape from prison and gain his rightful position to the throne of Endra by defeating the tyrannical king, Delzain. Watch this anime for its engaging storyline and the unusual friendship between 2 individuals from contrasting universes. 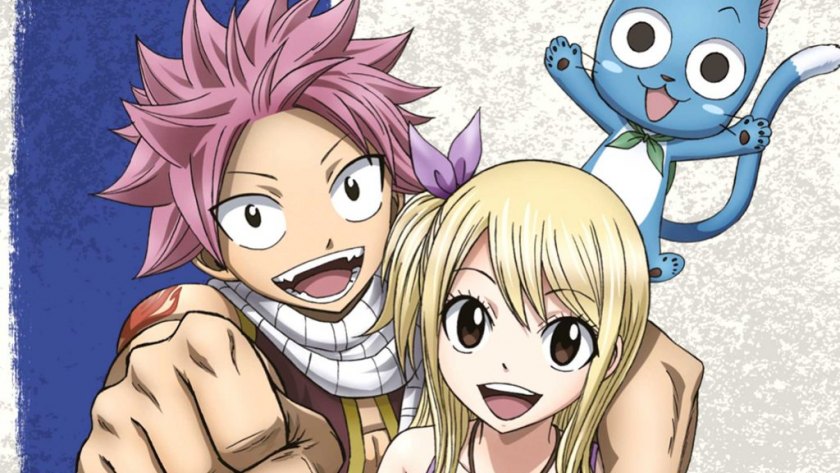 If you haven’t watched ‘Fairy Tail’ yet, you must be new to anime. It tells the tale of Lucy Heartfilia, an ambitious young girl who aspires to become a powerful mage someday. The whole story is set in the backdrop of a mythological land of Fiore, where powerful magicians form guilds to complete harrowing quests. In her quest to become a mage, Lucy meets Natsu Dragneel and his magical companion, ‘Happy’, who are on their own journey to find a dragon called ‘Igneel’. The two form an unusual bonding and this is when Lucy gets to know that Natsu is part of one of the most renowned guilds of Fiore, i.e, Fairy Tail. Together with the help of friends, they embark on an unforgettable journey which is sure to give you goosebumps when you least expect it. Full of unexpected twists and turns, this anime teaches us the power and value of human bonds more than anything else. A must watch for all otakus out there! 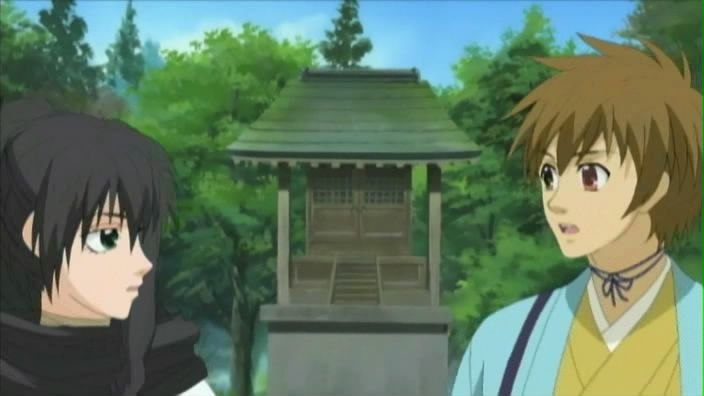 A lesser known gem, ‘Amatsuki’ tells an interesting story through a short span of 13 episodes. Tokidoki is an average high school kid who fails in history class. This results in him being sent to work for a history museum that runs a virtual reality project to recreate the Edo period. Things take a turn for the worse when Tokidoki is suddenly attacked by two supernatural beings called ‘the nue’ and ‘the yakou’. Following the loss of vision in his left eye, Tokidoki is rescued from the nue by a girl named Kuchiha. Once things start clearing up for him, Tokidoki realizes that he is not wearing the VR goggles anymore and is permanently stuck in the Edo period. 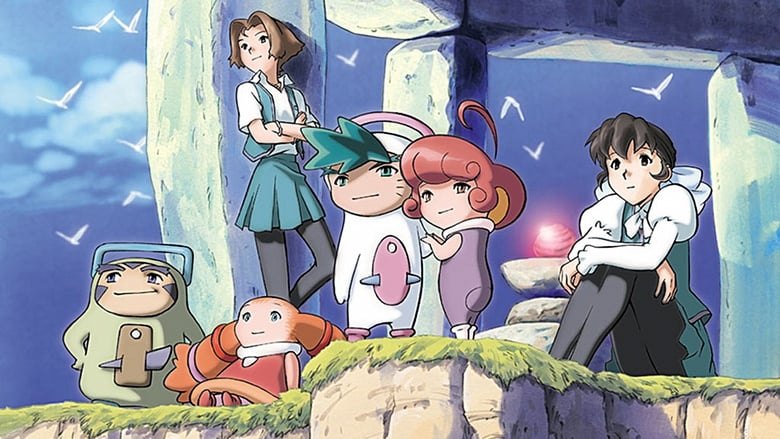 Drawing a striking similarity with ‘Fushigi Yugi’, ‘Strange Dawn’ tells the story of two teenage girls named Eri and Yuko. Both of them are mysteriously transported into a strange planet, where they meet tiny people who worship them as godlike creatures. These tiny inhabitants tell Eri and Yuko that they must rescue Princess Alia as she is the one who brought them here and has all the answers that they seek. Desperately trying to find a way back home, they come to learn that there is a greater purpose to this incident and the fate of the planet rests in their tiny hands. 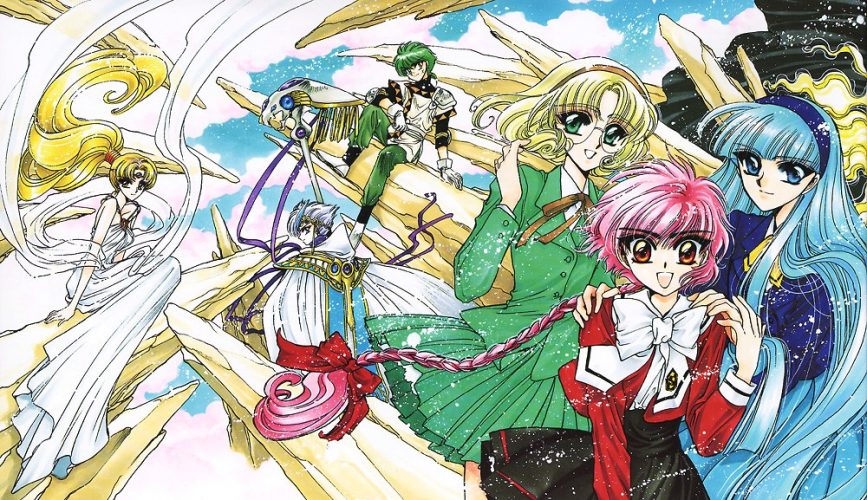 Hikaru, Umi and Fuu are 3 girls who meet for the first time during a school trip to Tokyo Tower. Suddenly, they witness a flash of light accompanied by the voice of a woman who desperately pleads with them to save ‘Cephiro’. From nowhere, a giant fish appears and sweeps them over to an unknown land. There, they meet Master Mage Clef, who informs them that the mysterious voice they heard before belonged to Princess Emeraude. He also informs them that it is she who magically brought them here to anoint them as knights who will save the kingdom from the evil that has recently befallen. This has ‘Fushigi Yugi’ written all over it with a little pinch of ‘Sailor Moon’ spice to cater to the avid shoujo crowd. It also highlights the depths of friendship and intimacy of human relationships.