6 Anime You Must Watch if You Love Guilty Crown 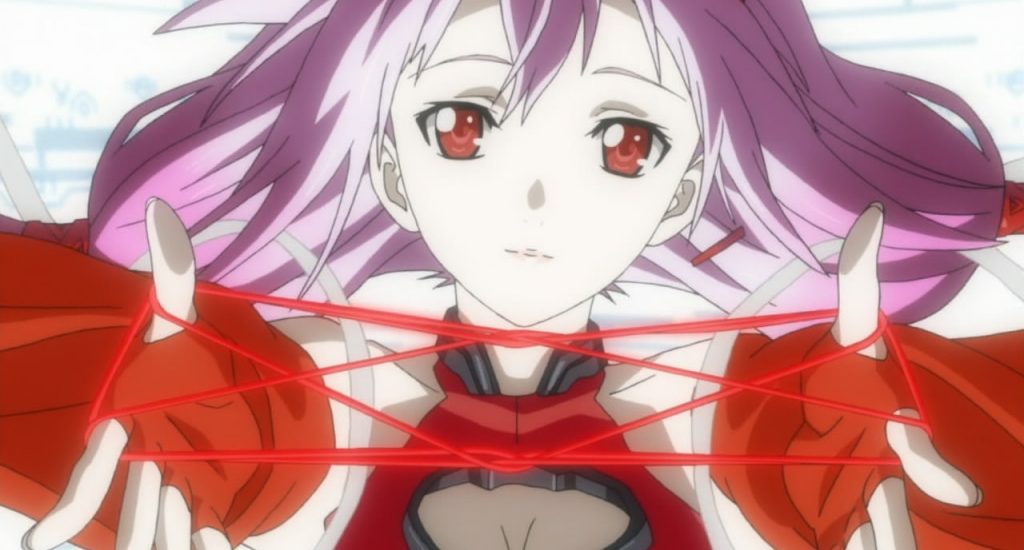 ‘Guilty Crown’ is an anime which deals with superpowers, science fiction, mecha, and military. The show takes place in the future and the year is 2039. Obviously, something bad has happened. I have no idea why anime and manga creators cannot envision a healthy future where everybody gets along well and there is peace and prosperity. I guess the present does not provide much hope for such a future. Anyways, coming to the plot, after the outbreak of the Apocalypse Virus, Japan has fallen. To uphold the law, a military faction, GHQ, emerges and decides to be the new ruling power in the nation. Their reign is tyrannous and the only group which rebels against them is the Funeral Parlor led by Gai Tsutsugami, who is a freedom fighter.

Shuu Ouma is a weak and unsocial boy who encounters Inori Yuzuriha, a strong member of the Funeral Parlor, during one of her missions. Certain events lead him to gain the ‘Power of Kings’. Now, Shuu becomes an unwilling participant in this important war and must use his powers to defeat the GHQ and give the country back to the people. But things are not as straightforward as it seems. There are secrets that might hold some shocking truths even about Funeral Parlor.

‘Guilty Crown’ is, without a doubt, one of the most interesting anime ever made. If you’ve enjoyed watching the series and are looking for other anime that explore similar ideas and themes, then you have come to the right place. Here’s the list of best anime similar to ‘Guilty Crown’ that are our recommendations. You can watch several of these anime like ‘Guilty Crown’ on Netflix, Crunchyroll or Hulu. 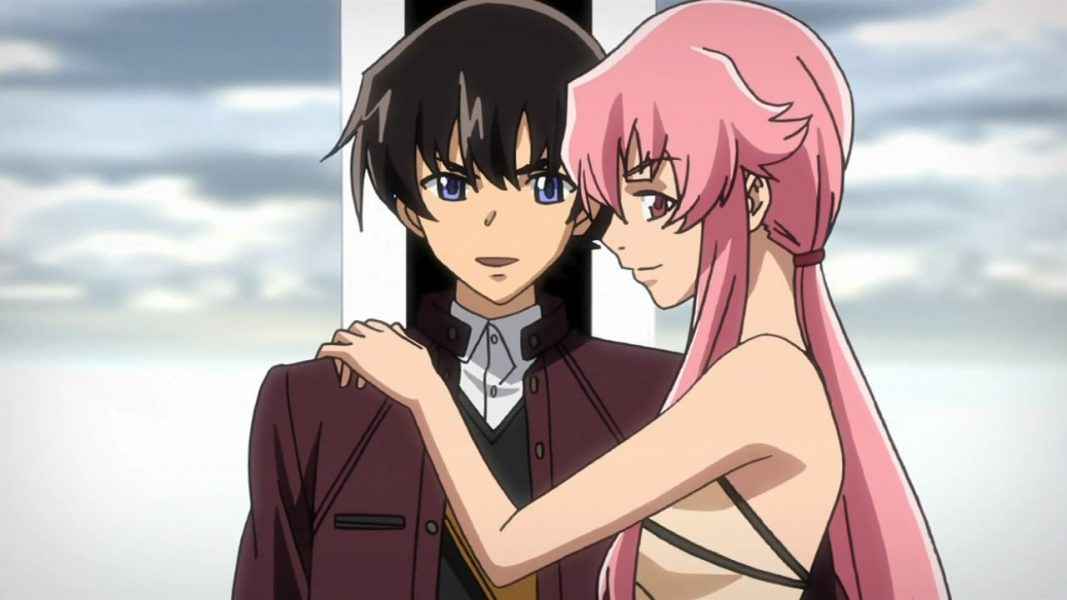 ‘Mirai Nikki’ is an entertaining anime and there’s a good chance that if you liked ‘Guilty Crown’ you will like this one too. Both anime give off similar vibes. The main characters in both the series are unsociable teenage boys who suddenly gain huge amounts of power. Also, there’s an eccentric female character in each of them, who are quite important in keeping the main character alive and later becomes their love interest.

Yukiteru Amano, the protagonist of the anime, is a lonely teenager. He spends his days writing a diary on his cellphone and conversing with two imaginary friends. One of the friends is Deus Ex Machina, the god of space and time, while the other is the god’s servant, Murmur. But soon, Deus and Murmur reveal themselves to be real. Deus then grants Yukiteru a diary which helps him ascertain the future. Soon, he learns that there are 11 others having similar diaries and he must find and kill in a battle royale where the last contender standing will become the next god of time and space. Yuno Gasai is a stalker obsessed with Yukiteru and she holds a diary too. Yukiteru reluctantly teams up with her and what follows is a very interesting journey. 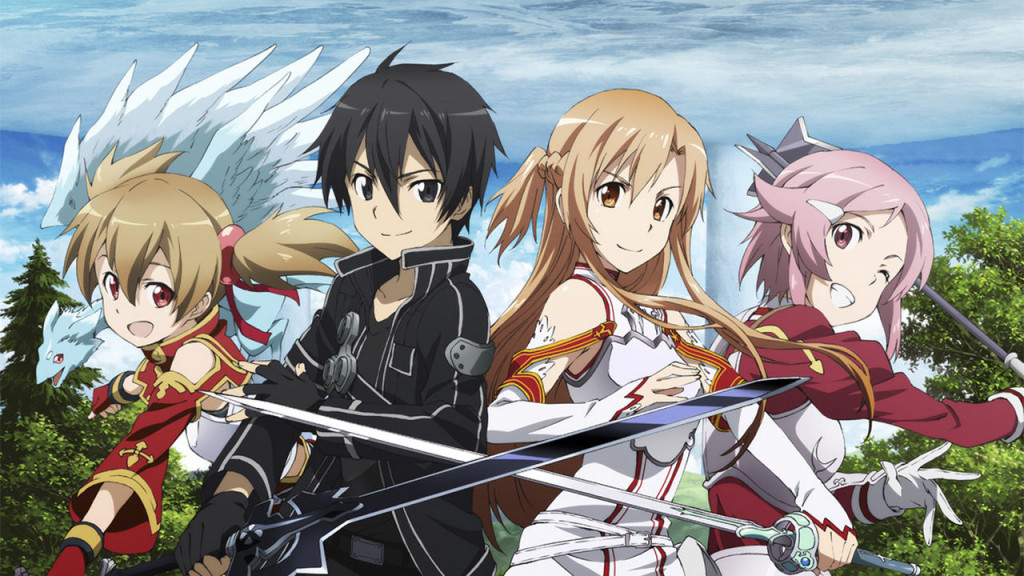 ‘Sword Art Online’ is an isekai genre anime. There’s some great romance between the main characters in this anime. So, if that is something which you liked in ‘Guilty Crown’, you will enjoy this anime too. In this series, too, the main character has great responsibilities on his shoulders as he has to get others out of the world that they are stuck in. His choices may not be liked by everyone but he has to do what needs to be done. Here again, the main character has a female companion who becomes both his morale booster and love interest.

The anime takes place in the future. Now, gaming is much more realistic (yes, that’s the only field which needs advancement) and thanks to the NerveGear technology, it is about to become better. A new game, Sword Art Online, comes. It has the latest NerveGear technology and allows players to virtually enter into a world. Kazuto Kirigaya, the protagonist of the anime, is one of many players who are able to get the first shipments of the game. He along with thousands of other players log in and start playing the game. The game is highly realistic and visually appealing. But soon, they find out that they cannot log out. The creator has trapped them and now they must complete the game if they ever want to return to their own world. The worst part is that if you die in the game, you die in the real world. Kazuto must now train himself and cooperate with other players if he plans to clear the game. But not everyone is a friend here. Both ‘Guilty Crown’ and ‘Sword Art Online’ have amazing art. 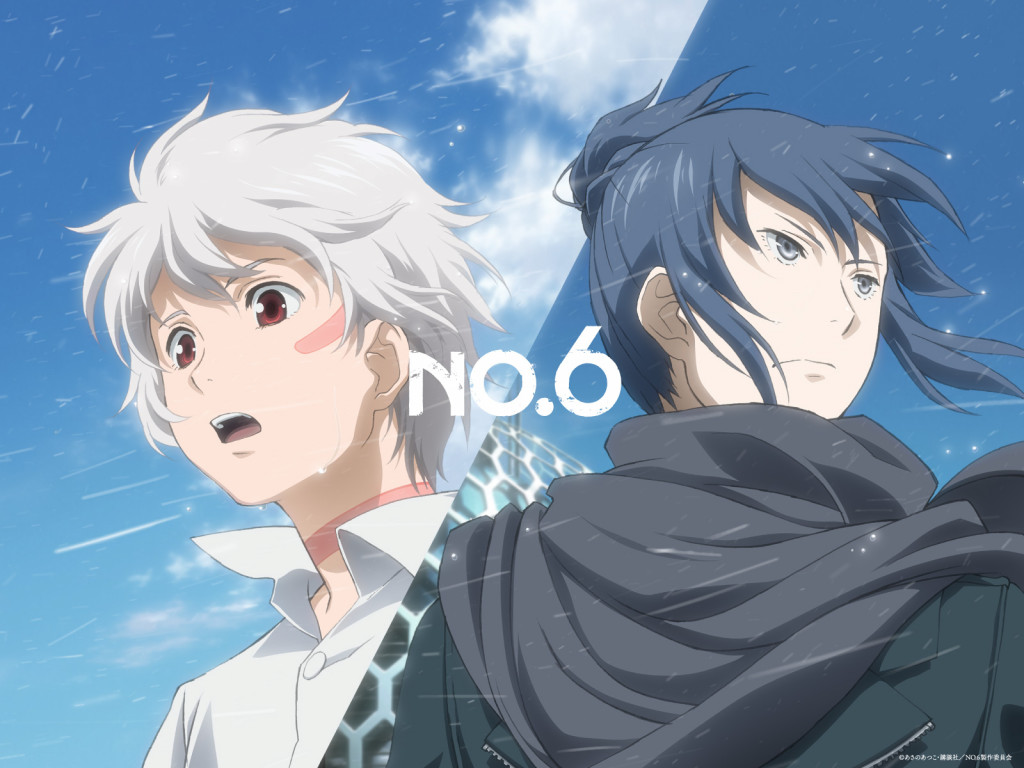 ‘No. 6’ and ‘Guilty Crown’ have lots of similarities. Both of the shows take place in the future and have some kind of virus affecting humanity. They both showcase future rebels trying to undermine the current tyrannous ruling power. Both anime are science fiction and have some sort of war in them. The series takes place in the aftermath of a world war. The war devastates everyone and mankind now lives in six city-states. One such city-state is No. 6. It seems as if life in this city is nothing short of a Utopia. Many people who live in this city are elites and enjoy lots of advantages.

Shion is one of the elite residents of No. 6. He gets a glimpse that the life here is a sort of facade after meeting Nezumi, who is a resident from beyond the city walls. Even though Nezumi is clearly a fugitive, Shion decides to take him in for the night. This decision drastically changes Shion’s life as he and his mother lose their elite status and have to relocate. Once this happens, Shion gets to really understand the dark side of the city. Some time after the incident, he encounters Nezumi, who is on the run. The duo takes on an adventure, at the end of which they will uncover the darkest secrets of No. 6. The series is interesting and the art is good. It has a total of 11 episodes of 23 minutes each. 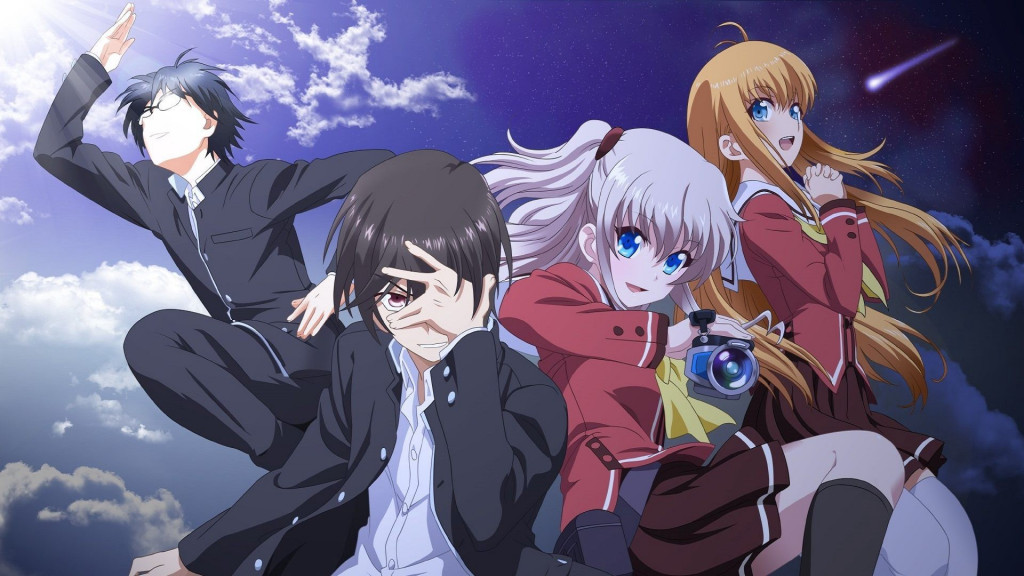 Like ‘Guilty Crown’, ‘Charlotte’ deals with superpowers. While in ‘Guilty Crown’ the protagonist receives the power in his teenage years, the protagonist in ‘Charlotte’ possesses the powers naturally. Both shows deal with the concept “With Great Power Comes Great Responsibilities”. They also blend drama and supernatural themes. Both shows seem to have great amounts of twists and turns in their plots.

Yuu Otosaka, the protagonist of ‘Charlotte’, has the power to enter into other people’s mind (how convenient). He obviously uses his power selfishly (who wouldn’t) and is able to get the highest grades. This enables him to enter into a really prestigious high school. But unfortunately, his luck runs out as a girl named Nao Tomori catches him in the act of using his powers. She then forces Yuu and his sister Ayumi to transfer to another school which deals with students having supernatural abilities. Nao heads the student council here and forces Yuu to join the council. The aim of the council is to find and stop teenagers who misuse their abilities. Yuu has to use his powers for the first time for the greater good. Through this challenging task, Yuu learns a lot and discovers the shocking truth about his own abilities. 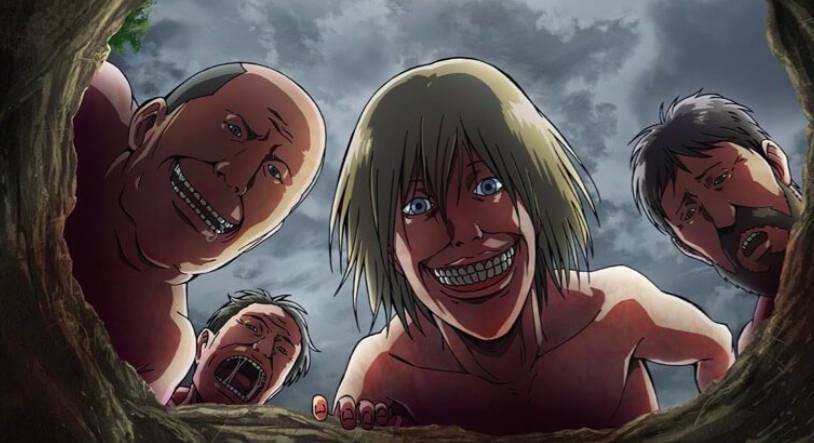 ‘Shingeki no Kyojin’ is currently one of the most popular anime. It is highly entertaining and the different twists and turns that the anime takes its viewers through will keep you invested. The second part of the third season of the anime came out this year. So, you have enough content to binge the series comfortably. ‘Shingeki no Kyojin’ gets a spot on this list because of the main character. In both anime, the main character is in their late teens when they gain (discover in Eren’s case) huge powers which become key to tipping the results of the ongoing conflict in the favor of the ‘good guys’. Both anime belong to the superpowers genre and have great drama and action and contain a female character protecting the main character.

‘Shingeki no Kyojin’ takes place in the past. Humans are on the brink of extinction, thanks to the huge humanoid monsters, Titans, who destroy every human on their path and have an appetite for human flesh. After seeing his mother being eaten alive by a Titan, Eren Yeager, the protagonist of the anime, vows to kill every Titan. He trains hard and joins the military but the secrets that lie ahead might change everything. The action sequences in the anime are awesome and the series has a wonderful array of characters. 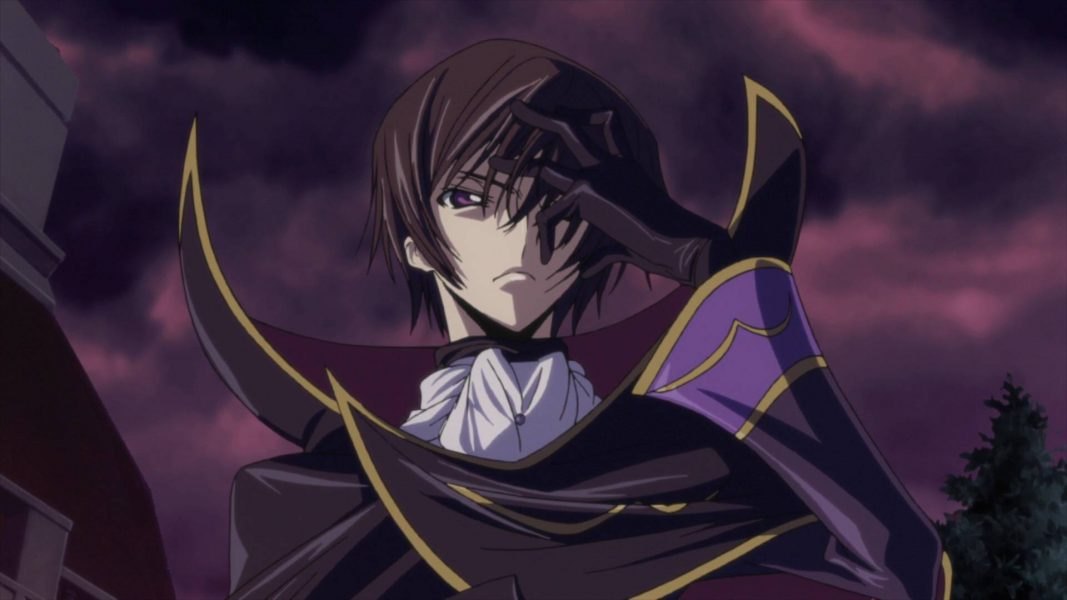 ‘Code Geass’ is one of the most popular anime on this list. It is entertaining and has some great drama and action. Both ‘Guilty Crown’ and ‘Code Geass: Hangyaku no Lelouch’ are quite similar with the key difference being the settings. They both seem to deal with a teenager who suddenly gets powers and now has to use it for the greater good. They get dragged into something they never thought of being a part of. Both these anime have awesome mecha action.

‘Code Geass: Hangyaku no Lelouch’ takes place in the year 2010. A military nation, the Empire of Britannia, is slowly gaining momentum in its goal of becoming a dominant power. It conquers Japan, which is renamed to Area 11. But Japan is not going to give in so easily and rebels start waging wars against Britannia. Lelouch Lamperouge is a student from Britannia who is unfortunate enough to get caught in a conflict between Area 11 rebels and the forces of the Britannia Empire. A mysterious girl saves him and grants him the power of the kings, which give him the power of absolute obedience. Lelouch now uses this power to get revenge and end the reign of the empire of Britannia once and for all under the guise of the vigilante Zero. This is a really great series and should definitely be on your watchlist.