Sex scenes in the world of anime are not solely confined to Hentai. Even shows that may initially seem innocuous can suddenly surprise you with the most graphic scenes. Anime shows, like all the other mediums, try to use sex scenes to either lure a young male audience or to add depth to its characters. That being said, a lot of anime shows have been added to Netflix’s ever-growing catalog and with this growing list, we also get to see some really weird shows that feature all kinds of “never-seen-before” sex scenes. From “gambling orgasms” to “demonic seductions”, Netflix has it all. So, here’s the list of really good anime sex scenes on Netflix that are available to stream right now: 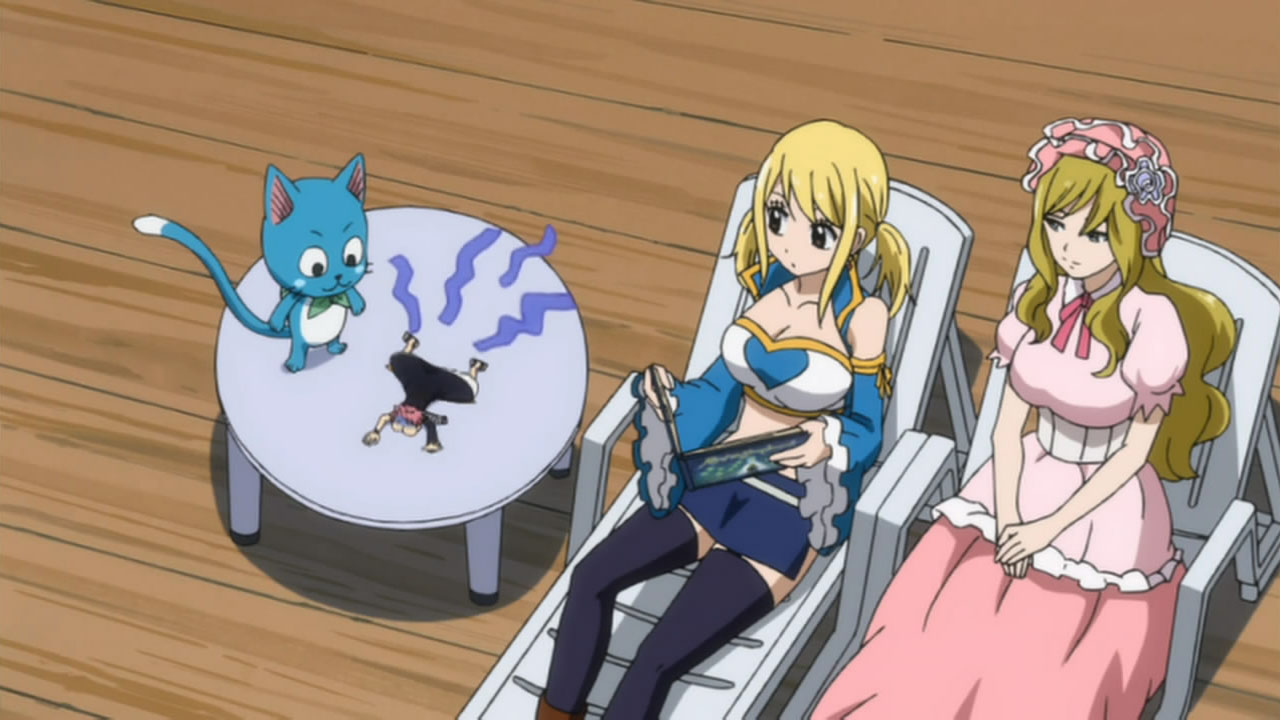 If you’ve been a ‘Fairy Tail‘ fan for a while now, you’ve probably noticed how it never eases out on its fanservice and with every episode, even the female protagonists somehow get curvier. Don’t get me wrong; the fan service is great for a while and the way it has been used for some occasional comic relief is commendable. But after a while, it really starts to get on your nerves because you just can’t take the show seriously with so many unnecessary breast-gags. But if we compare it with other similar anime that involve a whole lot of fanservice, it is certainly better. Also, for the most part of it, the nudity is censored, due to which it only becomes borderline Ecchi.

‘Fairy Tail‘ is very well known for its famous bath scenes where several characters of the show are portrayed naked all at once. In one of these scenes, Erza, who seems to have some sort of sisterly love for Natsu, takes a bath with him. While it is debatable if she actually has a thing for him or she’s just comfortable being naked because she knows that their relationship is nothing more than that of real siblings, the scene is extremely weird and may seem a little disturbing too, due to the obvious incestuous overtones.

‘Baki‘, being a combat tournament anime, is extremely violent and graphic for all right reasons. Somewhere between all of its gory fight scenes and profanity, there is a sex scene that features Baki and Kozue. While the sex scene is something that was expected all along, it’s the whole setup of this scene that turns out to be really weird and confusing. The dark background music player with this completely changes its mood and that’s when Baki starts narrating the whole thing in grave detail. The narration could’ve made the scene better if his voice was not so goofy all the time and to make things worse, even the imagery is not all that great. Netflix’s recreation of ‘Baki’ is a fairly decent anime but the sex scenes certainly need improvement. 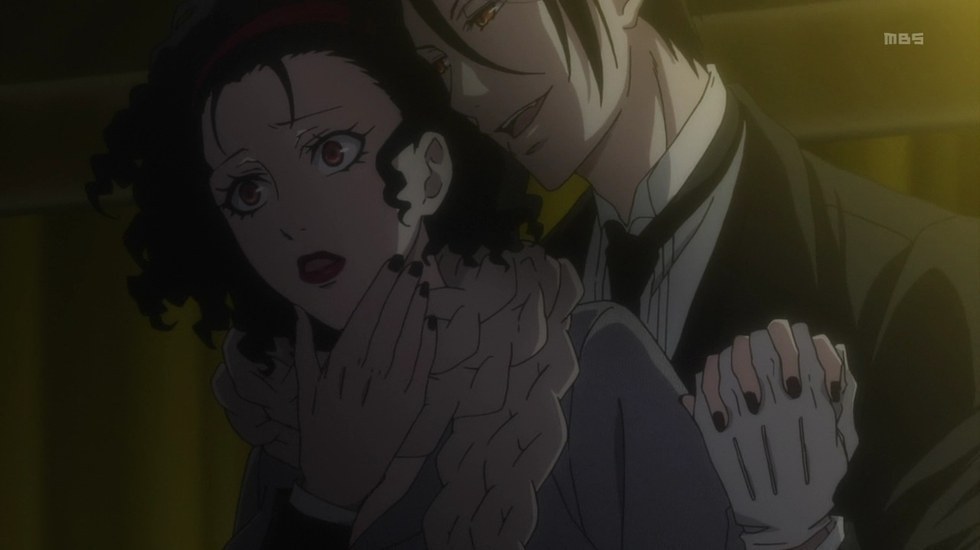 ‘Black Butler‘, for the most part of it, is a dark anime that rarely brings in any fan service. But there is one scene that catches you completely off guard. Sebastian is one of the two main protagonists of the show and plays the role of a 12-year-old boy’s demonic Butler. Considering that he is not even human, seeing him getting involved in a sexual situation is surprising in itself. In one particular scene, just to get information from a woman named Beast’s bed, he tries to seductively talk to her. And when she’s completely lost in the moment, he uses her vulnerability to ask her secrets about her father. This scene plays a major role in portraying the demonic side of Sebastian. A lot of times, he might come off as a pretty good demon who helps Ceil fight crime. But it’s scenes like these that give you a reality check on who he truly is. 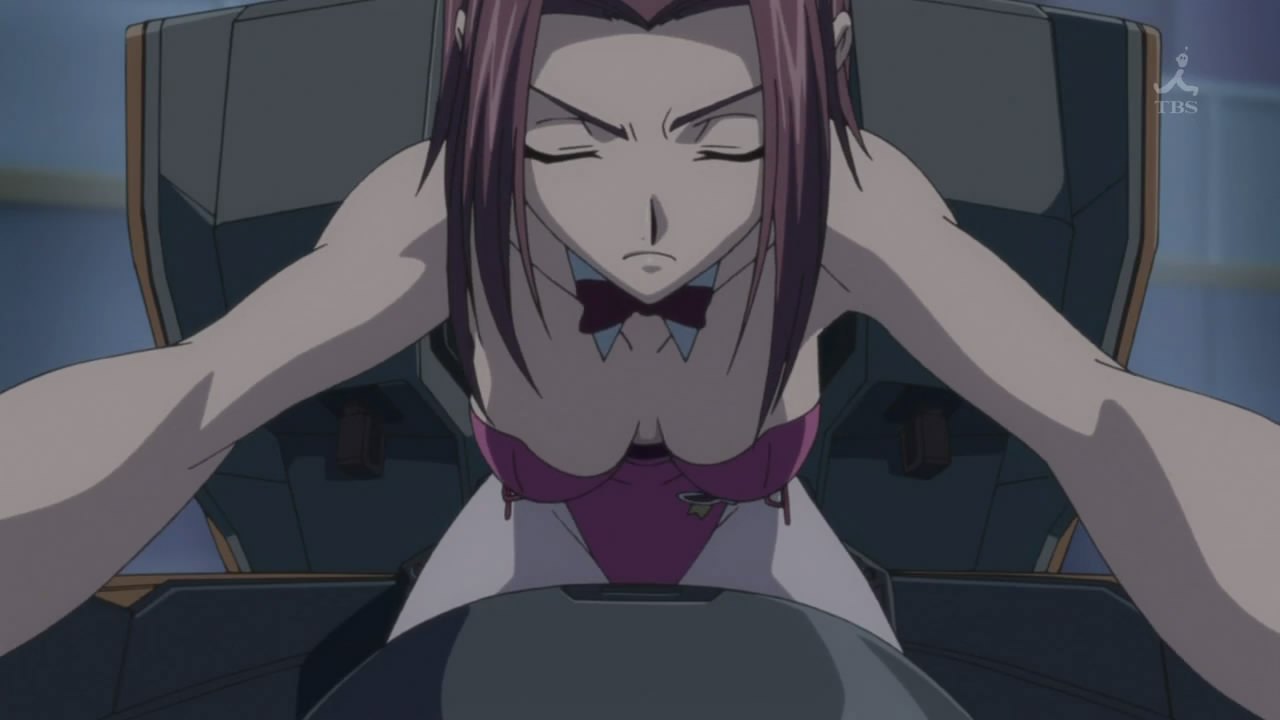 This list would be incomplete without the infamous “table-Kun” scene of ‘Code Geass‘. It features a character named Nina Einstein who is shy and quiet on the outside, but deep inside, she has quite a maniacal mind. She even designs a weapon of mass destruction all by herself and later tries to countermeasure it. In episode 12 of season one, there is a very controversial scene where she stimulates herself using a table. The disturbing nature of the scene has sparked a lot of hatred for this part of the anime and even the character. The infamy has also made her an internet troll where people often insultingly refer to her as “Table-chan” and the table as “Table-Kun”. 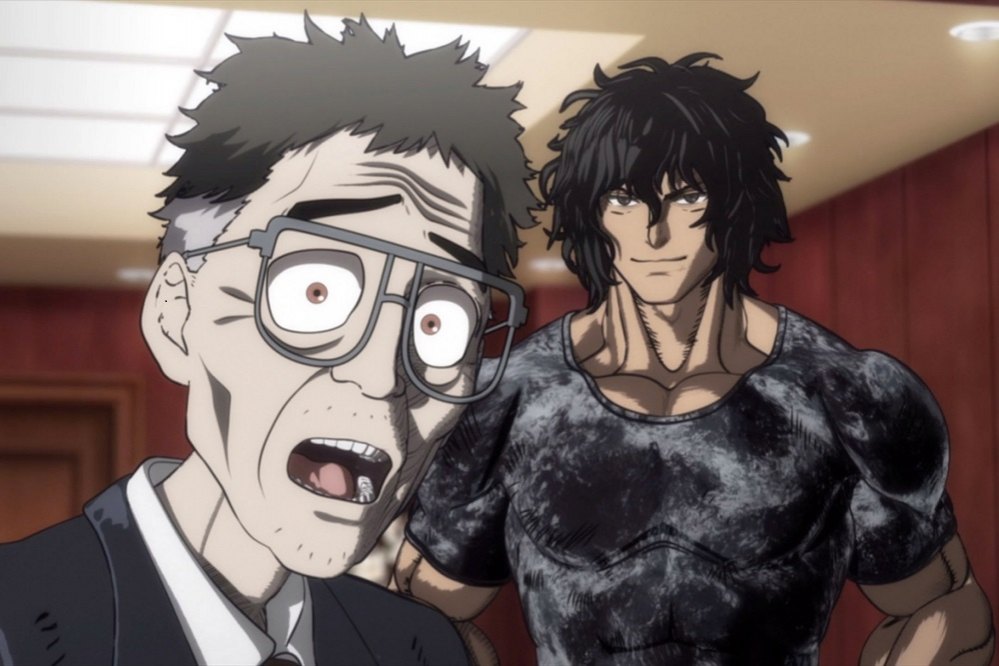 The sex scene in ‘Kengan Ashura‘ is so brief that you probably did not even notice it. It happens during the initial moments of season one and despite its short runtime, it actually holds a lot of significance in context of the plot. Yamashita Kazou, a frail 56-year-old man, is one of the two main protagonists of the series. He has a very dull personality and his insecurities often reflect upon his docile body language. Tokita Ohma is the other main character of the anime who is the perfect embodiment of an alpha male. When Yamashita spots him for the first time during a street fight, he gets so excited by his alpha male vibes that he later goes and has sex with a prostitute. 10 years before the events of the anime, his wife had walked out on him and since then, he has been more or less of a loser who gets pushed around by people of power. But this scene shows how he starts a transformation towards resurrecting his lost manhood after her meets Ohma. 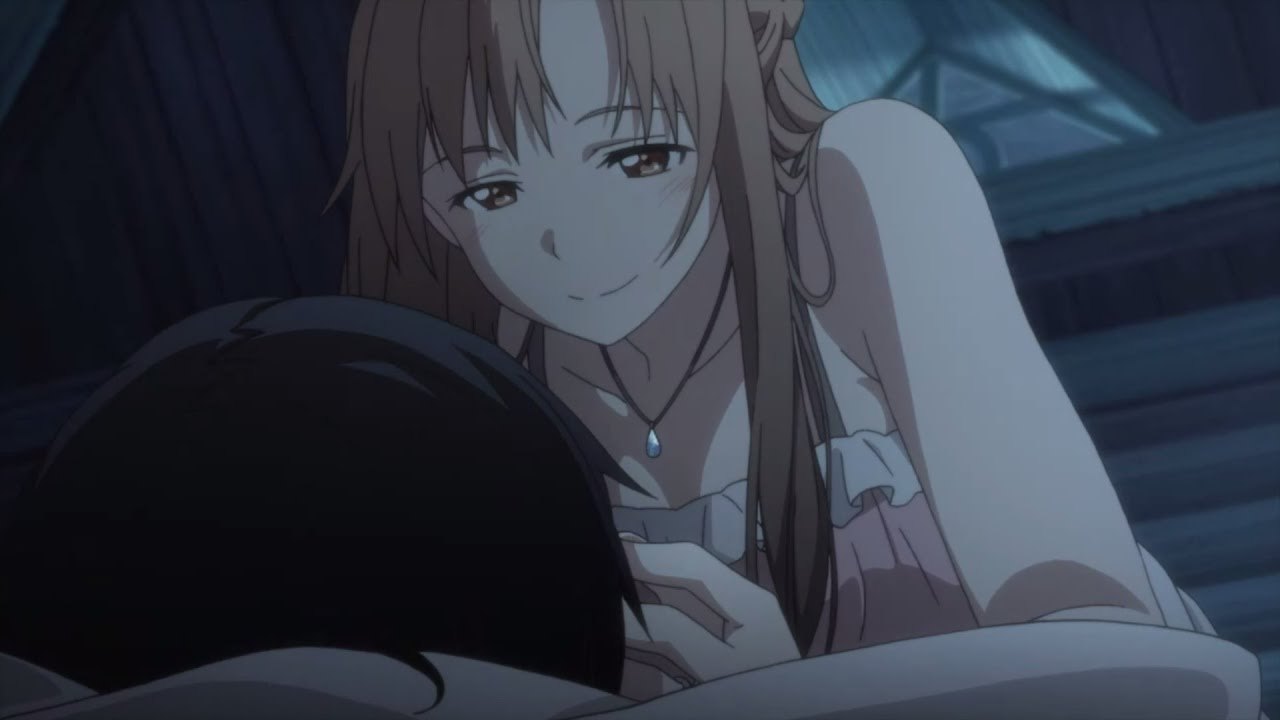 If you’re an experienced anime viewer, you’ve already seen some of the most beautiful love stories that involve the cutest characters. From Edward and Winry in ‘Fullmetal Alchemist‘ to Misaki and Usui in ‘Maid Sama‘; all of these love stories have deeply moved us. But one of the most heartwarming stories comes from ‘Sword Art Online‘, which revolves around Kirito and Asuna.

There is one scene in the anime that portrays an “implied sex scene” between the two characters. Asuna invites Kirito for a sleepover and after a while, she turns off the lights and magically takes off all of her clothes. She then asks Kirito to undress while he just sits there in absolute shock. He then says that he just wanted to “stay in the room” and for obvious reasons, this really pisses off Asuna. The scene then abruptly comes to an end. Even in the manga, there are no direct implications of sex between the two characters, but they are shown in the same bed at the end of the same sleepover. It’s almost like the mangaka expects you to fill in your imagination with this one. Whatever the case may be, Asuna either has the wrong idea of what a sleepover truly is or Kirito is just a fool. 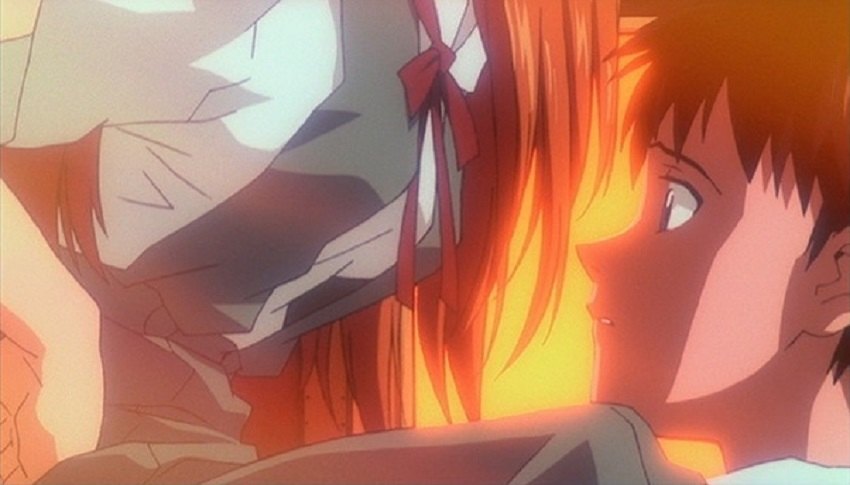 Misato Kisaragi is one of the main characters of ‘Neon Genesis Evangelion‘. Almost throughout the series, she is portrayed as the kind of character who does really let out her inner-self. And that’s the reason why her sudden emotional distraught that sets in later, comes as a big shock. Shinji, the main protagonist, ends up losing his entire physical being after being absorbed into the cockpit of Unit-01. By this time, Misato is emotionally invested in Shinji and her concern for his well-being completely makes her lose all hope. To deal with this, she has sex with her old college lover, Kaji. In the series, and also in ‘The End Of Evangelion‘, it has been implied that when the two of them were lovers, they once ended up spending an entire week doing nothing but having sex.

Getting back to the sex scene, it depicts how her coldness towards him was actually just an act and how she still emotionally relies on him in many ways. In a brief moment, as a viewer, you can also notice that Kaji drops a birth control pill on her dresser. During this moment, one might just see this as another intense anime sex scene, but everything from the pill to Misato’s sudden behavioral change has deeper significance in the story. This brief scene is enough to show how well written the entire series is.

‘Kakegurui‘ is a prime example of “fanservice done right“. While watching anything other than meaningless Ecchi, most viewers don’t even care about fan service. But ‘Kakegurui’ literally adds value to its fanservice by using it in such a way that it holds a lot of significance in the overarching plot. It revolves around a bunch of female characters who are obsessed with gambling and even explicitly compare it with sex. The show depicts an intense gambling atmosphere where the stakes are high and it almost recreates the highly glamorized atmosphere of a Las Vegas casino.

In an intense atmosphere like this, sex appeal becomes necessary. Not just one scene, but there are several moments in this anime where the female protagonists get turned on by the thrill of something as simple as a coin toss. This not only makes the anime more entertaining but also makes its characters more believable. It’s easy to create a character who is simply driven by the idea of earning wealth, but it takes a lot of efforts to create a character like Yumeko, who is willing to risk everything just to gain the adrenaline rush of a mere game. ‘Kakegurui‘ has certainly made a remarkable achievement by using sex to its advantage. 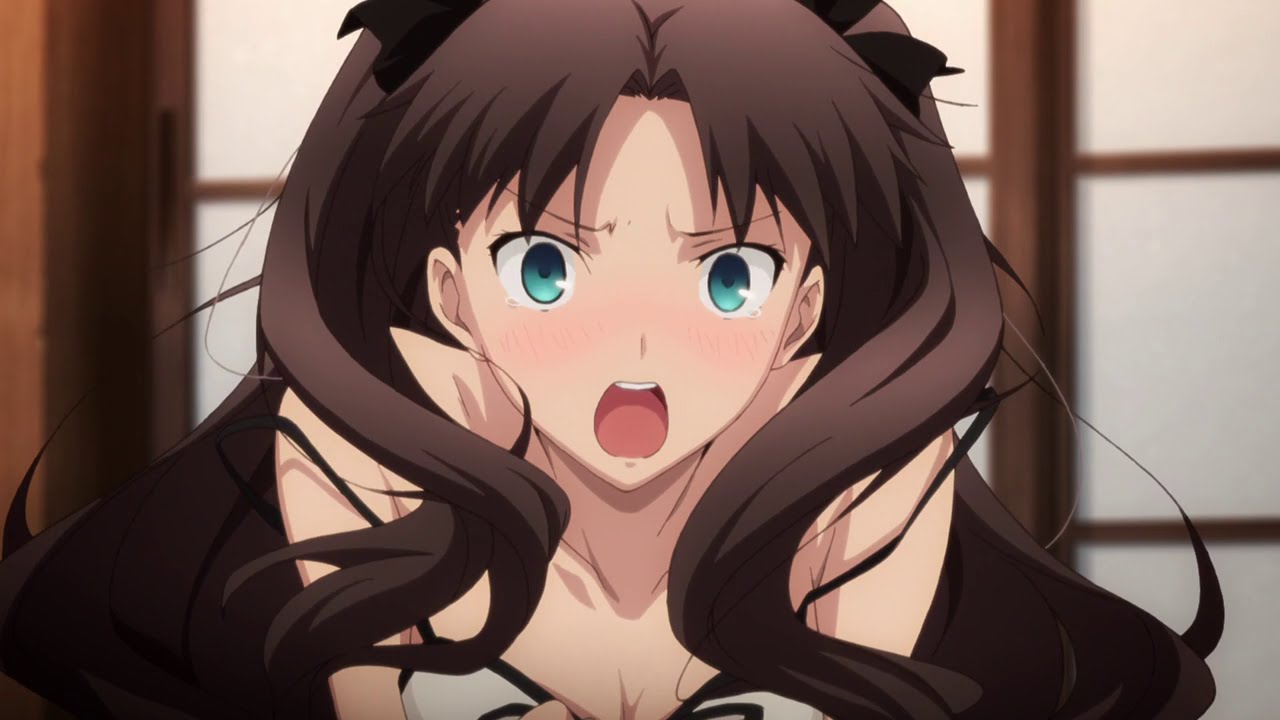 Ecchi has always been a secondary genre for the ‘Fate’ series. But compared to its visual novel, the anime really holds itself back with its portrayal of sex and nudity. ‘Fate/Stay Night: Unlimited Blade Works‘ revolves around the Fifth Holy Grail War were a bunch magi battle against one another in a tournament. Rin and his servant Archer are the participants of this war and they are soon joined by Rin’s classmate, Emiya, and her servant, Saber.

There is an “implied sex scene” where Rin starts to get all steamy with Saber and even asks Emiya to join her. She claims that this will give them some “necessary physical contact” before their next battle. The anime does not really explain what this means but according to the visual novel, “mana” or magical powers can transfer very well through sex. So all this was basically to refuel Saber before their battle. 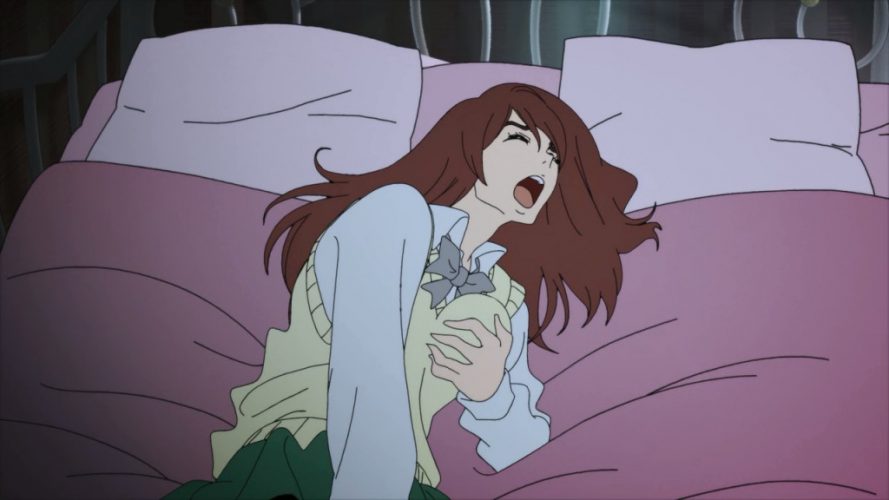 ‘Devilman Crybaby‘, directed by Masaaki Yuasa, contains the most extreme content that has hit Netflix lately and packs a disturbing collision of nudity, violence and of course, demonic insanity. From being a slow-burning anime, ‘Devilman Crybaby’ suddenly becomes a graphic gorefest at the end of episode one. The two main characters, Akira and Ryou, go to a Sabbath which seems like a harmless teenage rave. But soon, the whole place is dusked upon by hungry demons who wildly attack everyone. Their teeth and tentacles literally lash out of every “orifice”, making the whole place a brutal mess. There is another scene where a character named MiKo, a shy schoolgirl, touches herself when she thinks about the alpha male image of Akira. This scene does not have any nudity but the weird noises she makes while doing it makes this one quite memorable. And not to mention, she gets possessed by a demon soon after this.