Where is Annabelle Doll Today? 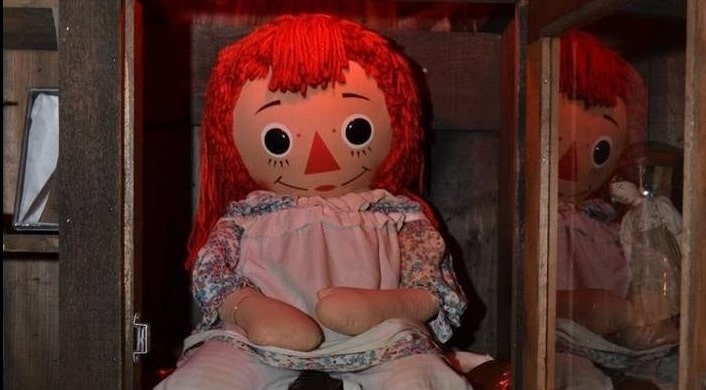 The Annabelle doll has remained a mystery to lovers of the macabre and the occult for a long time. Ever since ‘The Conjuring‘ movie franchise introduced the Annabelle doll to viewers, it has received unforeseen heights of infamy. In case you’re unfamiliar with the plaything with a creepy history – it is a Raggedy Ann doll, believed to be possessed by a malevolent spirit. As is shown in the movies, Ed and Lorraine Warren, the paranormal investigators have kept Annabelle in a protected glass cage for so long. Lorraine even spoke about it saying that the priest’s blessings work towards keeping Annabelle in the case, in a way an electric dog fence would for a dog.

With so much protection and caution devoted towards Annabelle, netizens have naturally been concerned since rumors started circulating about Annabelle having escaped. However, we know exactly where she is now, so you can put your mind to rest.

Where is Annabelle Doll Now? 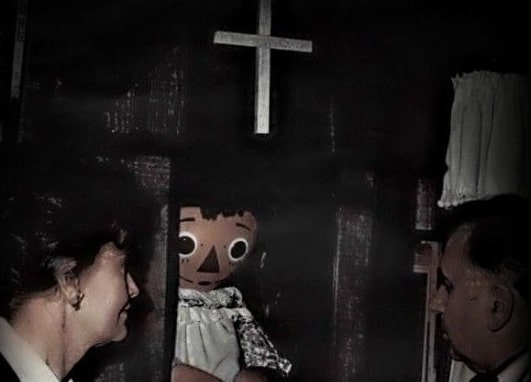 Ed and Lorraine first came in contact with Annabelle in 1970, when two roommates informed them that a girl by the name of Annabelle Higgins had possessed their doll. Soon, the paranormal investigators realized that something far more insidious was at stake, and an inhuman presence was manipulating them. Taking the Annabelle doll away, to limit damage, Ed and Lorraine put it up in the ‘Occult Museum.’

Basically, this museum is a place where the two have kept several paranormal paraphernalia, over the years, to prevent them from getting out into the world. As we’ve seen in the movies, the museum is part of Ed and Lorraine’s house in Monroe, Connecticut. So, is Annabelle there now?

Yes, Annabelle is still at Ed and Lorraine’s residence at Monroe. However, it would technically be wrong to say that she’s still at the ‘Occult Museum.’ The Knollwood Street residence has been the mecca for several curious visitors, wishing to see the house of horrors hosted inside. Not only has it disturbed the neighbors, but it also caused problems for the entire residential area. The crowd-puller’s led to safety hazards, including the inability of fire trucks and ambulances to pass unhindered through the streets.

As a result, Tony Spera, the Warrens’ son-in-law, who looks after the property, closed down the museum. The town even put up a sign stating, “Museum closed due to zoning regulations. No trespassing.” Spera gave the latest update on Annabelle, himself, standing in front of the enclosure, which is backlit. He assured everyone that while the news of the doll escaping, is worrisome, he has some very high tech security installed. The cameras and alarm systems would let him know the instant anything went amiss.

Tony’s made it clear that the cops in Monroe have a fantastic response time. They come within a few minutes of a call being placed. Thus, Annabelle appears to be in her old enclosure for now. However, with the ‘Occult Museum’ having closed down for good, it remains to be seen if Annabelle is ever back on display for those who are fascinated by the morbidly supernatural object. As of 2016, Tony Spera can technically start a permitted museum business in Monroe. The Planning & Zoning Commission decided to allow museums in certain commercial areas, including Business 1, Business 2, and Limited Office Retail zones.

Since the 1970s, the Annabelle doll has remained in the safe custody of the Warrens, and now Spera. It is hardly a plaything and continues to be just as dangerous. Lorraine had recounted an incident in the past, where a man had mockingly banged on Annabelle’s glass case. He and his girlfriend were asked to leave the museum, due to their behavior, but got into a fatal bike crash sometime later, which claimed the man’s life. The girlfriend stated they’d been joking about the doll at the time. Thus, it is a good thing Annabelle remains contained under the watchful eye of Spera, because 2020 definitely doesn’t need an evil doll let loose on the world.