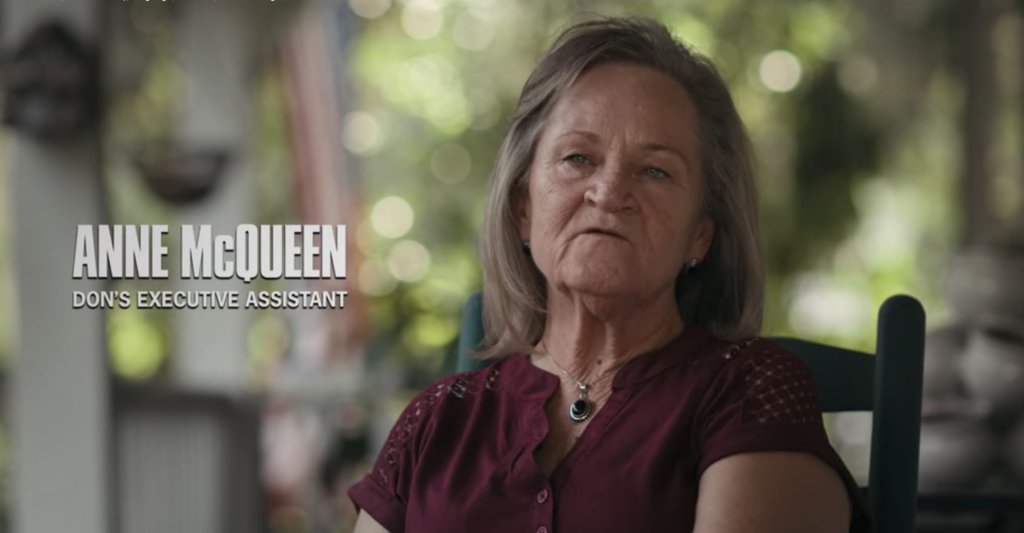 Netflix’s ‘Tiger King‘ might be about Joe Exotic and his misadventures regarding his zoo. However, the docuseries also shows us a few other big cat owners. Most of them appear to have some character flaws and are far from perfect. However, Carole Baskin of Big Cat Rescue stands out among them, as a self-righteous woman, willing to fight the good fight.

Obviously, Carole’s image is hampered by the suspicion that she might have had a hand in her then-husband, Don’s disappearance. One of the people who’ve spoken up vocally about this is Anne McQueen, Don’s long-time secretary. Recently, Anne’s comments themselves have invited backlash from Carole. Curious to find out where Anne is now? We have got you covered in that regard.

Who is Anne McQueen?

Anne McQueen had been Don’s secretary for 18 years and went on to become a partial beneficiary of his $1.25 million life insurance policy. However, she’s also opened up about Don’s supposed infidelity, saying, “I’m probably the only woman he never fooled around with. I used to say it was the only time in my life that I was glad I was short and fat.”

That said, Anne has also been vocal about Carole’s possible involvement in Don’s disappearance. Carole has naturally lashed out against this, saying that people are wrong to believe that Don was a rich man, and Carole might have gotten rid of him for his money. She’s said that “No one, including Anne McQueen who had access to his books, has ever provided any bank records or other evidence that he had more than that.”

Carole has also pointed out that if Anne possessed Don’s restraining order application, it is likely for her to have gone to the police with it, immediately after Don disappeared, rather than having forgotten about it for two months. Carole’s also asserted that Anne was not Don’s ‘trusted assistant’, and was caught embezzling around $600,000 in properties. She’s attached the case file, which you can see here.

That said, Carole’s also spoken well of Anne, saying that she intervened and convinced Don to see a psychiatrist when his mental health was deteriorating, prior to his disappearance.

Anne’s Facebook profile shows that she graduated from Plant City High School, in Plant City, Florida, as part of the class of 1972. She’s been married since July 26, 1984. She has a daughter, Diane Barnes, a granddaughter, Jessica Black, and a daughter in law, Alisha McQueen. Meghan McQueen Nichols is her niece, and Cathy Fox Rahall is listed as a family member.

Where is Anne McQueen Now?

While Anne is from Plant City, records indicate that she currently resides in Tampa, Florida. As is evident from her Facebook post, she’s still concerned about what happened to Don.

Anne’s stated “21 years ago today…. Don Lewis founder of Wildlife on Easy Street now known as Big Cats Rescue disappeared “WITHOUT A TRACE” This is still an open albeit a cold case with the Hillsborough County Sheriff’s department, should anyone have any information, please contact the Sheriff’s department. I have been told that time heals all wounds… not true! Still hurts, still cry… still wonder. Family and friends deserve closure. I miss my friend.”

21 years ago today…. Don Lewis founder of Wildlife on Easy Street now known as Big Cats Rescue disappeared "WITHOUT A…

Recently, it appears that Anne and her husband have opened a new Airbnb. She posted some pictures on Facebook. You can check one out, below.

Most recently, along with the rest of the world, Anne seems concerned about the coronavirus pandemic. However, she’s dealing with it through humor, as we can see from her most recent post, made on March 24, 2020. Check it out here.