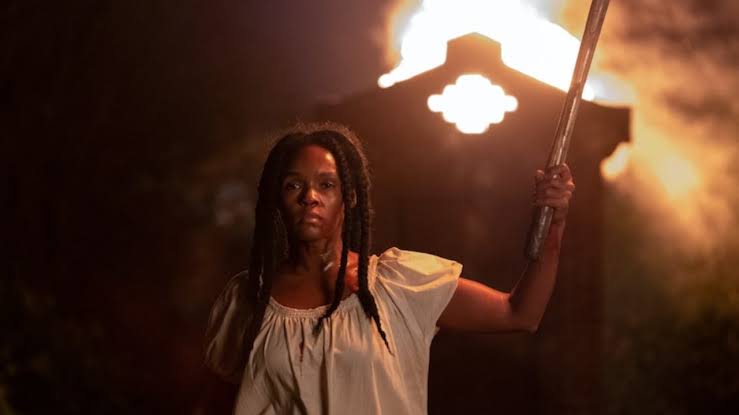 ‘Get Out’ meets ‘Django Unchained’ to form the great film that is ‘Antebellum’. Directed by Gerard Bush and Christopher Renz, the movie depicts the plight of a slave trapped on a cotton plantation in the Civil Rights era. The makers themselves could not have timed the release of ‘Antebellum’ any better; the movie released on VOD (Video on Demand) against a nation-wide climate fraught with Black Lives Matter protests. The film stars Janelle Monae, Gabourey Sidibe, Eric Lange, and Jena Malone.

The beginning of ‘Antebellum’ is a tracking shot of a vast plantation that stretches as far as the eye can see. We weave through a grand mansion inhabited by a white woman and child to a densely populated settlement of Black slaves, closely watched by a group of soldiers. It becomes apparent when the Confederate flag is shown flying high and mighty that we’ve landed smack dab in the midst of the Civil War and the soldiers are, in fact, part of the Confederate Army patrolling the south. It is here that we’re introduced to Eden, played by Monae, a slave new to the plantation. Eden endures appalling sexual abuse at the hands of a commanding general, whom she refers to only as Him. Captain Jaspar and other soldiers within the Army are not sparing either in the torture they inflict on Eden and the rest of the slaves. The mistress of the manor we spy in the opening sequence, Elizabeth, is harsh and indifferent to their plight.

In the second half of the film, we are transported to present-day America. Here, a dead-ringer for Eden named Veronica lives a privileged life as a revered sociologist. She is surrounded by people, namely her husband, child, and best friend, she cherishes and who, in return, shower her with love and affection. On a work trip down south, strange phenomena manifest around her – a bouquet of flowers, without a known sender, is given to her; a woman in a centuries-old outfit observes her from an elevator. This culminates in the back of an Uber Veronica unwittingly enters, whose driver is revealed to be plantation owner Elizabeth. Out of the blue, Captain Jaspar emerges and knocks Veronica out cold.

The newest development in ‘Antebellum’ spawns questions by the dozen. Is Eden a mere figment of Veronica’s imagination? Or is she an ancestor reaching out to Veronica from beyond the grave? As it turns out, none of the above. Eden and Veronica are, in fact, one and the same. The events take place in the 21st century; the slaves are citizens kidnapped at the hands of bigots and the soldiers are racists who pay to partake in their torture.

The movie starts out at the plantation and, somewhere around the halfway mark, works backward to reveal how Veronica came to be trapped there and subsequently transformed into ‘Eden.’ In the starting sequence of ‘Antebellum’, we see the owners of the estate christen the new entrants to the plantation with a different name. Elizabeth and her daughter likely designated the name ‘Eden’ to Veronica after she set foot on the plantation. They do so to strip the slaves of their former, free identity and to bequeath them a new one.

After another ‘slave’ takes her own life, Veronica and fellow ‘slave’, Eli, are compelled to hatch a plan to make their escape. The two venture out at night and get their hands on a cell phone, which Veronica uses to place a harrowed call to her husband and send him her location. The general, meanwhile, has awakened and is prepared for battle. The three engage in a tussle; Veronica, and Veronica alone, emerges unscathed. While Eli is struck dead by the general, Veronica manages to successfully knock the general out.

Concurrently, ‘Captain’ Jaspar spots Veronica and makes his way over, weapon at the ready.  Immediately, she cries wolf and claims that the general lies fatally injured in the shed. As Jaspar falls for Veronica’s trap and rushes towards the shed, he lets slip the true identity of the general – Senator Blake Denton. When he and other Confederate soldiers are safely inside the shed, Veronica barricades them within and sets the shed on fire. Their terrified screeches are the last we hear of them. Meanwhile, Elizabeth, who we discover is none other than Denton’s daughter, has begun fervent pursuit of Veronica.

A game of cat-and-mouse ensues between the two and, Veronica, with renewed vigor, manages to subdue and then knock the Senator’s daughter out. She rides off to the edge of the plantation and whizzes past a billboard promoting it as a park. The billboard reads: “Antebellum’, Louisianna’s premiere Civil War reenactment park. All major credit cards and Apple Pay accepted. Anyone disturbing the peace of this plantation will be prosecuted. Blake Denton, owner.”

As she exits the confines of ‘Antebellum’, confounded tourists watch on and sneak pictures of her. Interspersed with the credits, we see Antebellum’s downfall unfold – FBI agents comb the plantation for culprits and survivors alike; evidence is gathered; the advertorial billboard for ‘Antebellum’ is bulldozed.

Racism: Its Past and Present

At the very outset of the film, a quote by William Faulkner, American writer and Nobel Prize laureate, taken from the novel ‘Requiem for a Nun’, is displayed –  it posits, ‘The past is never dead. It’s not even the past.’ This fittingly sets up the events that take place in ‘Antebellum.’ Incidentally, Faulkner also authored the novel ‘Absalom, Absalom’ about the American South and its dynasty. The novel explores how our past is oft reconstructed to suit our present imagination and belief. ‘Antebellum’ reinforces this and how.

In a fairly ‘Westworld’-esque scene, visitors of the park mill about as Veronica breaks free of her chains. We discover that everything that Veronica and her fellow hostages were subjected to took place in plain view of the American public. The only catch? No one discerned it as being real, only the remnants of a horrific past. The makers of the film meant this to be taken more allegorically than literally. The movie demonstrates that, in the same vein that the reenactment park is unmistakably located in full view of the park visitors, racism and supremacy in modern society is more than apparent, and even flaunted, to the masses.

The visitors perceive the racism and human rights violations taking place within the park to be a thing of the past, unaware that, all along, they were part of a shocking present. Similarly, the makers of ‘Antebellum’ aim to drive home that racism is still deeply rooted in the present, and not merely a turbulent part of history. And while we can turn a blind eye to what transpires before us, it doesn’t negate its existence.

Moreover, the very fact that a sitting US Senator is the ringleader of a horrific, racist, and downright, criminal, enterprise serves as a glaring reminder that racism is often propagated and its flames stoked by those perched at the top-rungs of the societal ladder. It should be noted that not only do Denton and his family criminally oppress the kidnapped Black ‘slaves’, they also ostensibly turn a profit while doing so. On the backs of Veronica and the other slaves’ exploitation, Denton’s park business is, judging by its copious amounts of visitors, flourishing. Power in the hands of the Black man, however, is no foil for the racism he is subjected to. Veronica lived a life of privilege and still ended up the victim of racially-charged crimes. ‘Antebellum’ is searing in its critique of the racial divide.

Read More: Where to Stream Antebellum?