Are Tyler and Catelynn From 16 and Pregnant Still Together?

Tyler Baltierra and Catelynn Lowell came under the spotlight after they starred on the first season of MTV’s ‘16 and Pregnant,’ which premiered on June 11, 2009. The reality TV stars showcased the innumerable struggles that they faced as teen-parents but unlike the many others, quitting was never an option for them. Irrespective of the complications they tackled throughout their journey, the two have remained glued for 15-long-years. This makes their bond all the more special, intriguing us further to know for sure if the duo is still together or not?

Tyler and Catelynn: 16 and Pregnant Journey

Tyler Baltierra and Catelynn Lowell were both in the 7th grade when they started dating each other. This was in 2005, and the high schoolers were as serious about each other as teenagers can be expected to be. After only three years of being into the relationship, she got pregnant with his child, and in 2009, MTV came up with the concept of exhibiting the journey of a teen mom and thus, featured Catelynn on its debut season. Tyler and his beau were hardly 16 when they turned into parents as well as reality TV stars. 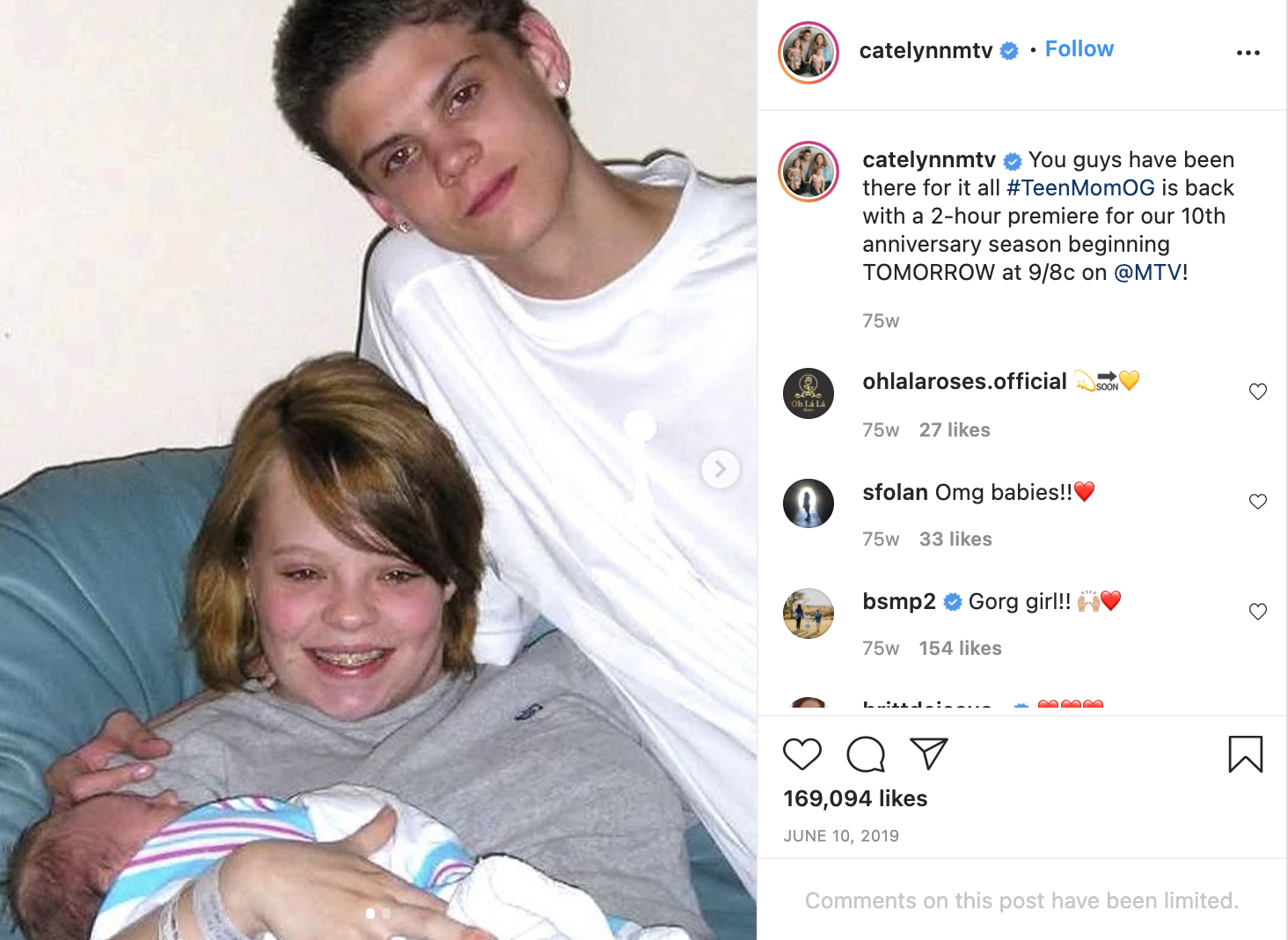 The last part of Catelynn’s pregnancy was filmed, following which they made the heartbreaking but practical decision to give their daughter up for adoption. Brandon and Teresa took Carolyn (Carly) as their own, and the biological parents have often confessed how well her new family has provided for her. After proposing to Catelynn in an episode that was broadcast in January 2010, Tyler got the shock of his life when he found out that she had hooked up with her ex-lover while the two were on a break. Gladly, the couple did not let it kill what they had and moved past the incident.

Undeniably, they had numerous bumps in the road even after that. Nonetheless, the pair got engaged for the second time in an episode that aired in February 2014. By August 2014, Catelynn announced that she and her fiancé were expecting their second daughter, whom they welcomed on January 1, 2015, and named her Novalee Reign (Nova). With the return of ‘Teen Mom’ as a spin-off series, ‘Teen Mom OG‘ in 2015, it was revealed that Tyler and Catelynn had tied the knot in August 2015 at the Castle Farms in Michigan. 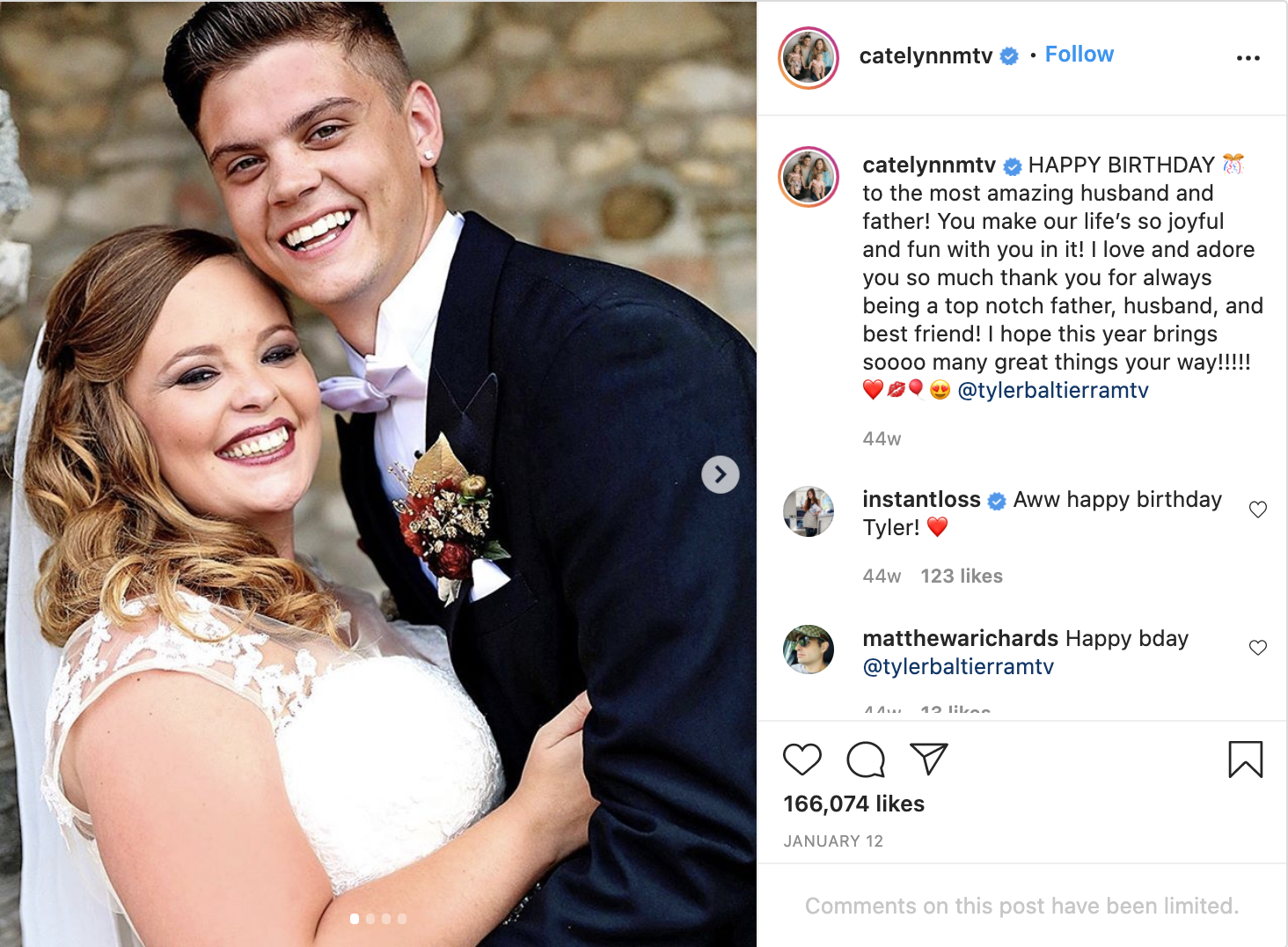 But the newly married couple faced fresh hell when the wife suffered severe bouts of postpartum depression that led to a detrimental communication gap between them. The low phase of their relationship got stretched not just to months but to years. In addition to a heartrending miscarriage, Catelynn also struggled with mental health issues through most of 2017 and 2018. Rumors of their trial separation turning into a divorce started to float around. So naturally, the question that arises is: Is the fan-favorite couple still together?

Are Tyler and Catelynn Still Together?

Without ever posing as the “ideal couple,” Tyler Baltierra and Catelynn Lowell have always remained true to themselves. During their 15-year-long relationship and eventually marriage, they have treated every stumbling block as a stepping stone and come out on the other side, happier and stronger! By February 2018, they posed for an adorable post together dissing the divorce-talk.

In May, publicly mocked the tittle-tattle by posting a mushy picture of them kissing with a sarcastic caption that read, “Damn! I think divorce looks pretty good on us.” They announced their third pregnancy in September 2018 and became proud parents to their third daughter, Vaeda Luma, on February 21, 2019. Whatever problems the couple has been facing are all external, and none lie between them.

They were slapped with charges of an unpaid debt amount of over $800,000. Around April 2020, a Michigan court clerk updated The Sun that the federal tax lien remains standing despite their numerous income sources. Other than this, the ‘Teen Mom OG’ fans can heave a sigh of relief as there is confirmedly no trouble in Tyler and Catelynn’s paradise.

Read More: Are Rachelle and Chase From 16 and Pregnant Dating?