Are You the One Season 8: Which Couples Are Still Together?

‘Are You the One?’ or ‘AYTO?’ is a dating reality television series that features several hot and happening boys and girls who are clueless in love but are willing to shoot a shot at finding their perfect matches. Throughout the competition, they have to live under one roof and suit up with those they share the best connection with. However, there’s a catch – The matches are already determined by expert matchmakers based on an undisclosed algorithm. If the cast members manage to spot the correct pairings, they can win a cash prize of $1 million.

Although the show has not been well-received by critics, it has managed to earn a spot in the guilty pleasure binge-watch category and has spawned eight highly popular seasons. Season 8 concluded on September 9, 2019, and since then, fans must be wondering about the current relationship status of the couples. Well, let’s find out which couple is still together, who are friends and who don’t talk anymore!

When Asha entered the show, it was evident that she hasn’t come around to play but before committing to anyone, she needed to explore her sexuality and she did. Asha was a part of the fivesome that involved Jenna, Kylie, Kai, and Jasmine. Although Brandon had a tough time opening up initially, he and Asha connected intellectually and became the first perfect match of the season.

However, in the reunion special, both Asha and Brandon confirmed that although they connect well with each other but not on a romantic level. Brandon even said that throughout their time in the honeymoon suite, they had their fingers crossed because they were worried, they would end up fighting. So, despite being a perfect match, the two have separated but reportedly remain friends. Brandon’s account is packed with just his pictures and since Aasha’s Instagram account is private, we couldn’t find any pictures to corroborate the same.

Who All Still Friends?

If we take a closer look at the post-finale updates, Jonathan and Basit, clearly had a connection and at the reunion, Jonathan had said “The matchmakers got it right, so just keep watching us.” However, things fizzled out because of the geographical barriers between them and they broke up but remain friends.

I met a boy in Hawaii who had the most beautiful head of hair. From the moment we locked eyes I knew our connection was magnetic, but I could have never predicted how much our relationship would grow and evolve in such a short period of time. We ended up winning in more ways than one. Jonathan booked a flight to NYC right after we left Hawaii, and when he arrived here we picked up right where we left off. Our time spent together after @areuthe1 was proof that our relationship was genuine and authentic, and it gave me so much peace of mind to know we had built a relationship based in honesty and communication. My life, my goals, and my dreams are all based here in NYC, and I have no intentions of leaving anytime soon. Jonathan on the other hand had a difficult time seeing himself living in NYC which is totally understandable. This city ain’t for everybody. Ultimately we had to decide whether or not we would pursue a long-distant relationship, and because we value our connection so deeply we have chosen to end our romantic relationship on mutual, positive, and supportive note. We value each other so much, and have a deep respect and appreciation for each other. I personally have been in enough unsuccessful long distance relationships, and at the end of the day we both have to do what’s best for us 💜 Rain or shine, shade or sun You and I had too much fun When it all is said and done I always knew you were the one

It might break a lot of hearts but Max and Justin reconnected after the finale but nothing blossomed. As of today, it looks like the two are friends but far from a couple.

I’m so glad we finally made this happen 😊

Who Are Not Friends Anymore?

As far as Danny and Kai’s relationship is concerned, in the reunion episode, Danny revealed that Kai broke up with him and replying to that, Kai said that his life is pretty messed up and he doesn’t want Danny to suffer because of that.

This is what a hang over looks like. Tune in tonight at 11 to see what we were recovering from! #AYTO @MTV @areuthe1 @kai__wes

Also, Kai has already moved on and is in a relationship with Kendra. By the looks of their Instagram accounts, it doesn’t look like Danny and Kai are friends anymore.

If you don’t have matching harnesses are you even best friends? 🤔 💁🏼‍♂️ Thank you #sfpride for one of the most magical weekends of my entire life. Thank you for being the magical city that makes me feel more at home than any other place on earth. Thank you @kendyraaa for being the catalyst for meeting all of the incredible queer people we spent time with. And thank you to all of the beautiful humans who came up to me to say hi and take pictures because of @areuthe1 — y’all make me feel like I’m really doin’ something right in the world right now. My gratitude is endless, my queerness is overflowing, and I feel so blessed.

Although Amber and Remy and Paige and Jenna were declared a perfect match on the show, the two couples have broken up after the show. Paige and Remy pursued a relationship post-finale, however, it fizzled out and the two are not together anymore. Amber, on the other hand, had declared that she is single.

Jasmine and Nour were a perfect match but their clashing personalities fizzled the spark between them. As of today, the two are not even friends. 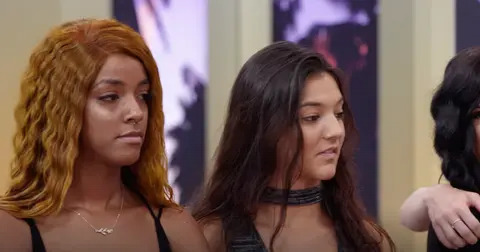 Although Justin and Kylie were a perfect match, they couldn’t connect outside of the show and went separate ways as Kylie claimed Justin didn’t respect her as a person.

Kari and Max were declared a perfect pair and the two believed they balanced each other out. However, their equations changed post-show and the two went on to date other people.