It is easier to stay with someone through years of prosperity than a single month of hardship. But the greatest relationships are those that have been tried and tested at the hands of difficult times. Shane Dawson and Ryland Adams are both YouTubers and social media influencers who met when circumstances were undemanding, to say the least.

However, the recent turn of events threw them off guard, and the two have chosen to remain relatively low-key since the start of 2020. Their fans began to wonder whether they would survive the storm or give in to the external pressure. We have answered the looming question: Are they still together?

Shane and Ryland: Journey Together

Shane Dawson is lucky enough to have found the love of his life only a year after he came out as bisexual in July 2015, followed by his separation from the YouTube star, Lisa Schwartz. He met Ryland Adams on Tinder, a fact that was revealed only a couple of years later, in March 2018. For the next few months, his fans noticed the handsome star occasionally pop up on his social media accounts without the pair making an official announcement about any romantic relationship between them. 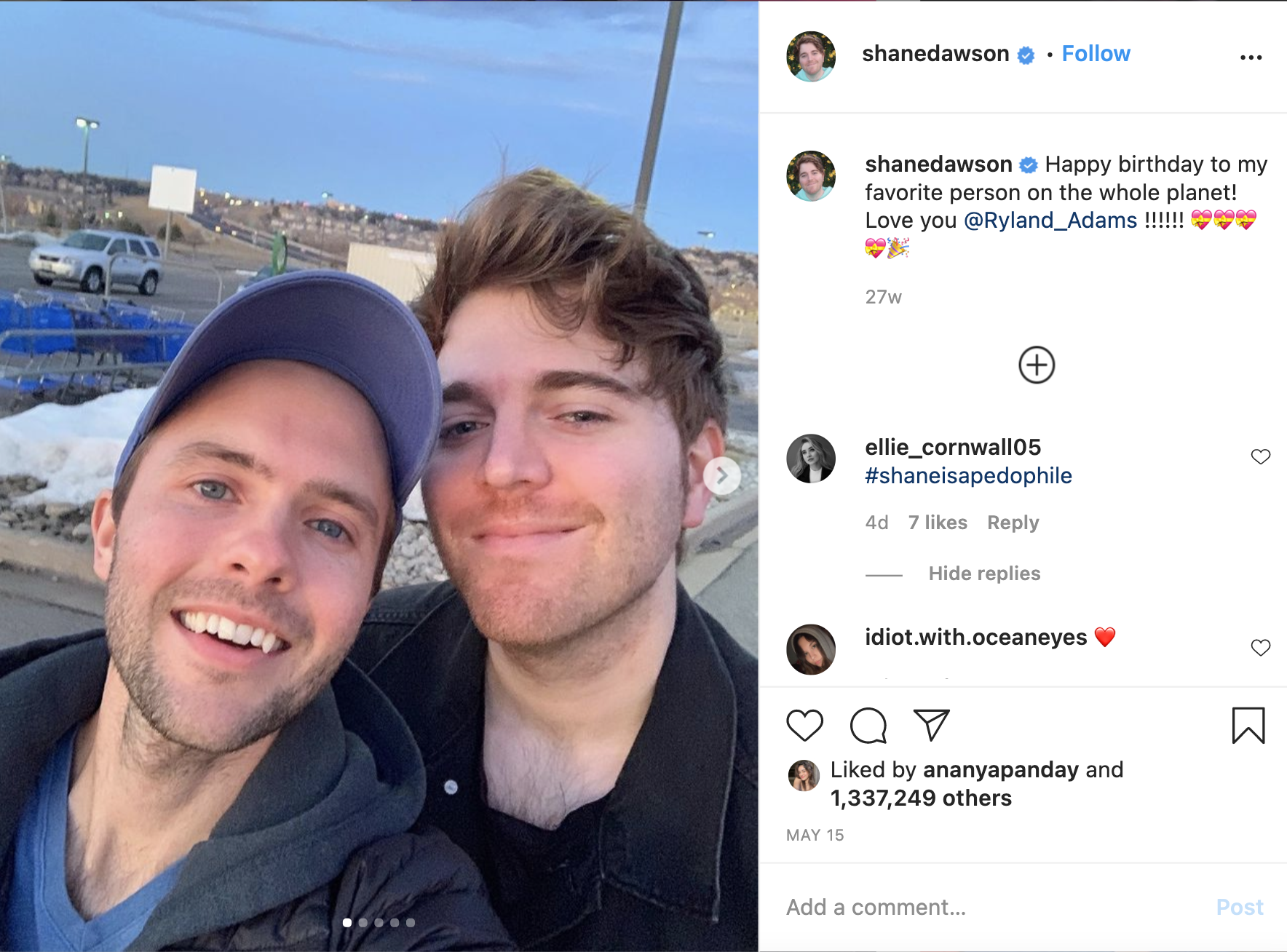 However, Shane finally opened up about his feelings for Ryland on October 24, 2016, in an emotional post in which he expressed, “This is Ryland. He’s sweet, caring, and makes me so incredibly happy. He’s also my boyfriend. He’s been a really big part of my life and I’m so grateful that I met him.” The adorable couple has had the most stable and loving relationship, in contrast to what one can imagine for celebrities in the show business.

Shane and Ryland became pet parents, traveled the world together, and celebrated all occasions like birthdays, Christmases, etc., next to each other. A day after dedicating a long, mushy captioned picture to Ryland, Shane announced on March 20, 2019, the happy news of how he went down on two knees (literally!) for his beau. 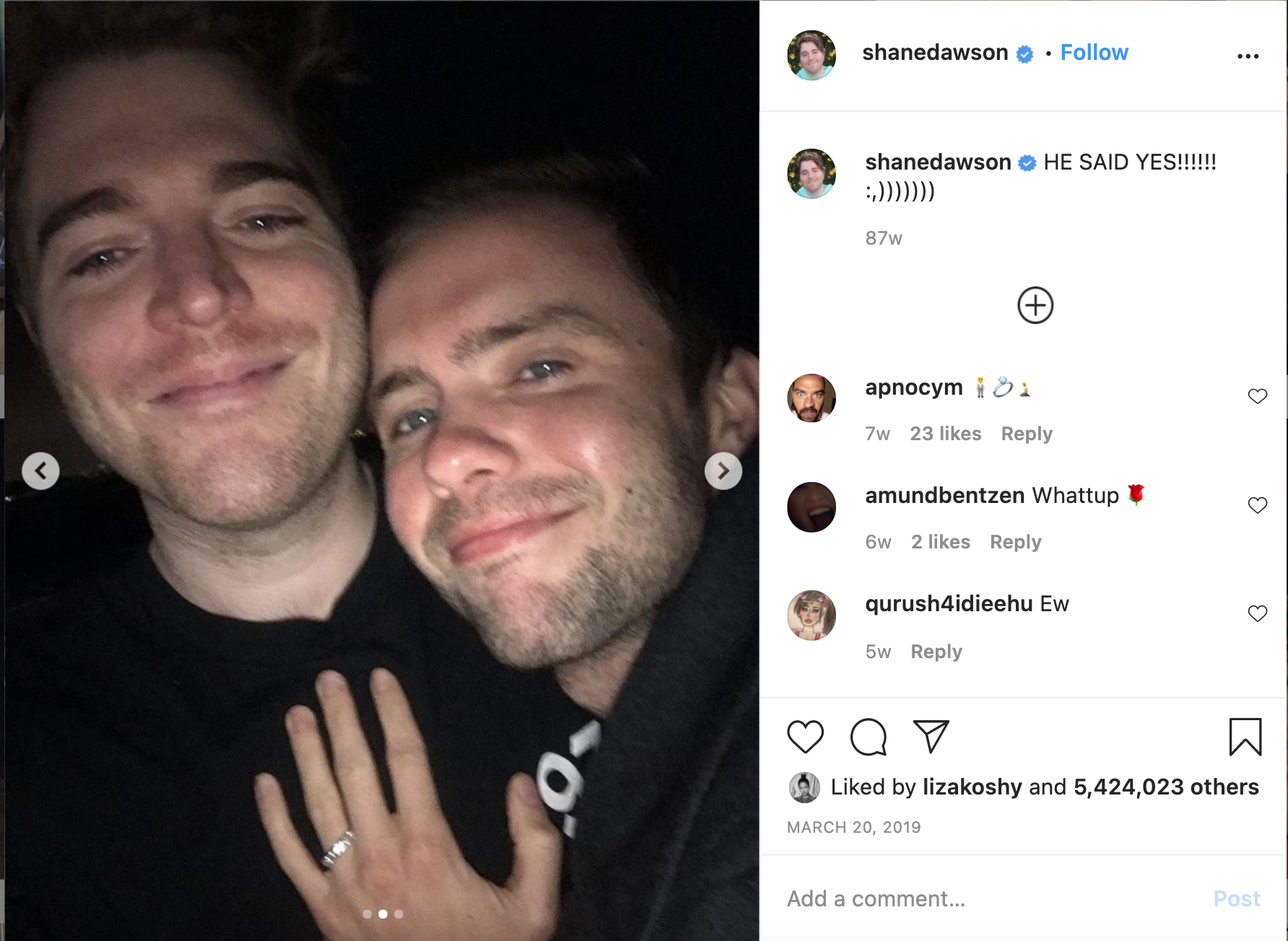 While the pair continued their fairytale love story, a popular makeup artist, Tati Westbrook, uploaded an explosive video on June 30, 2020, which unfortunately burst their happy bubble. She accused Shane Dawson of having “used, coerced, and manipulated” her into making the “Bye Sister” video in May 2019 that kick-started the scandalous feud with the beauty guru, James Charles. But this was only the beginning of a very rough year that was to follow for the YouTuber. Amidst this controversy, the tittle-tattle about his separation from Ryland started to float around.

Are Shane and Ryland Still Together?

Shane Dawson and Ryland Adams became “couple goals” way before the world was introduced to this very hashtag. It gives us much pleasure and satisfaction to reveal that they have remained so for more than four years. Ryland has been unabashedly and adorably supporting his fiancé amid controversy over Shane’s old content. They chose to stay mum for weeks on end after posting their initial response to the Westbrook feud.

But Ryland could not let pass Shane’s 32nd birthday without a public declaration of his love for him and sharing their intimate celebration of the day with their fans. While giant brands like Target and Morphe continue to lash Shane Dawson for his past use of blackface, the N-word, and pedophilia jokes, Ryland courageously offered his two cents about the whole mess. In a YouTube video titled “My Past, My Present, and My Future” on August 4, 2020, he put the rumors of their separation to bed.

In addition to providing the sensible “growth” explanation, the Internet sensation stated that, “I’m not a person that just runs from things when it gets rocky, especially when I don’t think Shane is a lot of these things that the internet is placing on him… I’ve been with him for four and a half years, and all I know is a genuine, loving, caring person. And I truly believe that that’s the person he is.” This leaves no trace of doubts in their fans’ minds that the two are indeed happy together and going strong!